In Shanghai, where 9 coronavirus-related pneumonia cases have been confirmed by China’s Centre for Disease Control on Tuesday, many citizens are still braving public transit.

Aldergrove-born English teacher Sarah Van Vliet is one of them.

“The atmosphere feels off and everyone is on edge,” she told the Aldergrove Star on Wednesday.

Even in a bustling metropolis like Shanghai with a population of over 24 million, Van Vliet said, protective face masks have largely sold out.

It took the teacher eight different trips to drug stores in the Pudong district Wednesday morning to find and purchase a mask.

“Face masks. They have been sold out – none left” a sign on the front of a Pudong drugstore Van Vliet visited read.

Hand sanitizer has been equally as difficult to find, Van Vliet noted.

With the number of reported infections from the virus climbing to 440 across 13 Chinese provinces, and concern that amount will rise, Shanghai’s streets and public transit have become an ocean of masks.

Normally, people in the city only wear such protection when they suffer from the common cold or the flu, Van Vliet observed.

But since word has spread of the coronavirus, nearly every person the teacher has come across has worn one.

And when most in Shanghai would normally gear up to travel as part of their Lunar New Year Plans, many decided to stay put.

“I had to cancel an overnight train ticket to Jihan because it just wasn’t worth the risk [of contracting the virus] to be on a train that long,” Van Vliet explained.

The city’s airports and major transit hubs began taking passengers’ temperatures on Wednesday, as part of an effort to prevent the spread of the recent SARS-like virus outbreak, Shanghai Health Commission said in a press release.

In addition, the airport terminals as well as railway and bus stations have also enhanced sterilization processes and ventilation, it added.

Experts from the Shanghai Center for Disease Control and Prevention have urged local residents to avoid outdoor activities, especially in crowded areas, to protect themselves from the respiratory illness.

The new strain of coronavirus, termed 2019-nCoV, has government officials in Shanghai pleading with its citizens to wash their hands and wear surgical or respiratory-grade face masks.

The SARS (severe acute respiratory syndrome) virus that killed over 700 people in the 2000s was also a coronavirus. And so is the common cold.

So far, nine people in China have died after contracting the new infection from in and around Wuhan, the central city where the coronavirus first emerged.

Wuhan, just 521 miles away from Shanghai, has been shutdown to visitors as well as flights and passenger train services, as of last week Thursday.

A total of 444 coronavirus cases and 17 deaths have been confirmed within the capital city.

The virus has also spread to other parts of China, with some cases reported in other countries, including the United States. 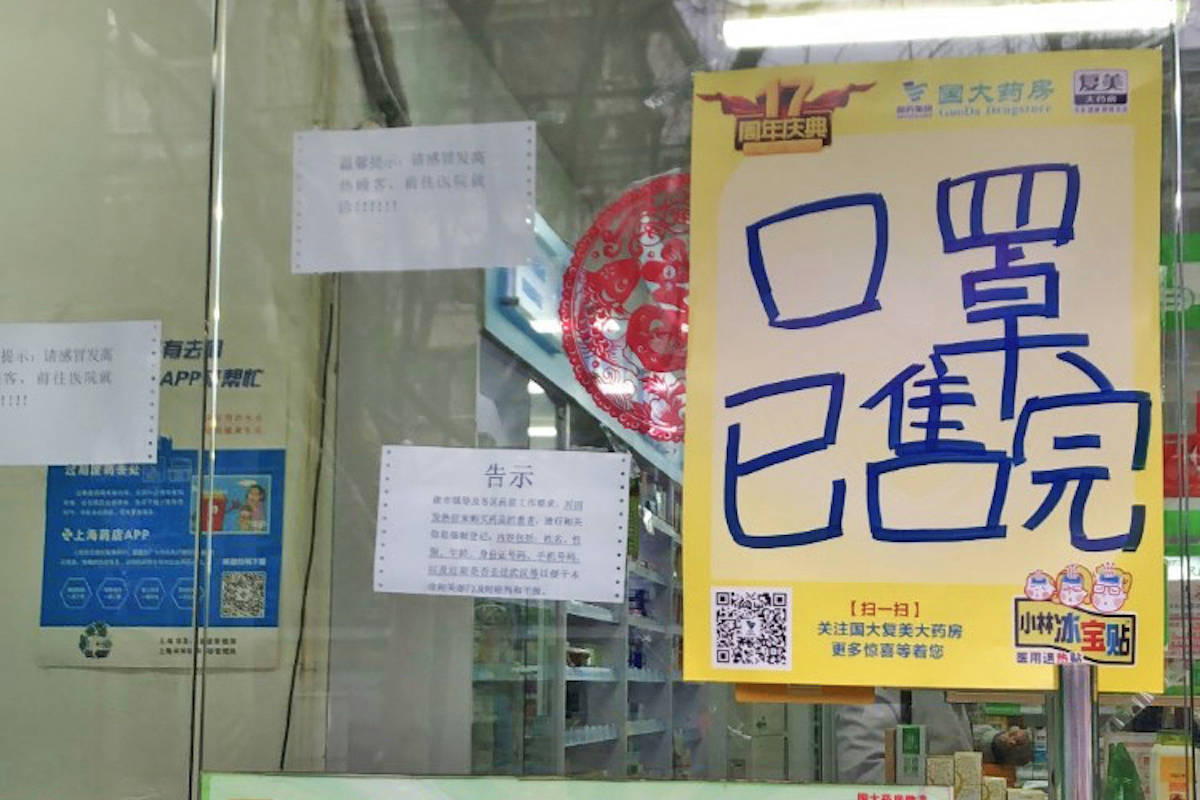 A closer look at the drugstore sign in Pudong, Shanghai tells the public it has sold out of face masks as well as hand sanitizer. (Special to the Aldergrove Star)