A letter issued by Langley School District about education concerning sexual orientation and gender identity and inclusion for all LGBTQ+ students has upset some parents.

Around 90 parents, as well as couple of students, packed the Langley Board of Education meeting Tuesday, to voice their opposition to the district’s new stance on protecting the rights of LGBTQ+ students and staff.

Parent Gudrun Stein told trustees that she represents a growing number of parents who are deeply concerned about the adoption of the SOGI (Sexual Orientation and Gender Identity) agenda.

“Parents were surprised they weren’t consulted.

“There is a large population (from various religions) that does not think this is a lifestyle worth celebrating,” said Stein. “K-12 students shouldn’t be subjected to this propaganda. I believe LGBTQ is a choice. They are not born this way.”

She went on to say that forcing this type of sex education on students coerces them into a way of thinking that isn’t in agreement with their family values. She also said it can lead children to question their identity when they are very young.

In March, the school district released a letter titled “Langley Celebrates Diversity.” It went home with every student and was posted on school websites.

It explains how the new curriculum set out by the province now prohibits discrimination against members of the LGBTQ community.

The letter talks about the importance of inclusion of all students and how the new curriculum includes education on SOGI.

The acronym LGBTQ+ represents people who are lesbian, gay bisexual, transgender, questioning, two-spirit or intersex, as well as sexual orientations and gender expressions.

“This topic is complex and not everyone will agree with it. We aren’t trying to change anyone’s beliefs,” said assistant superintendent Claire Guy at the April board of education meeting when she talked about the letter.

She has been working with the LGBTQ committee since 2014 to put together a platform of inclusion for vulnerable students who are often targets of bullying, discrimination and harassment.

“This message is to ensure students, families and staff feel welcome in our school communities. Our goal is for people to live authentic lives.”

Guy, along with Renge Bailie, district principal of student support services, spoke to the board of education in April about the steps the district is taking to keep schools safe and welcoming for all.

“A lot of youth are questioning their identity,” said Bailie.

Identity is different from sexual attraction. One per cent of the population identifies as transgender, she said and while it’s rare, some are identifying as young as Kindergarten.

There are also terms like pansexual, which means ‘not limited in sexual choice with regard to biological sex, gender, or gender identity.’

The letter home was ‘courageous’, Bailie said, and one that many districts have asked to see, and perhaps copy for their community of schools, she added.

But Susan Hitchman, from Growing Healthy Families, who has had five kids in the Langley public school system, says ‘SOGI ideology’ harms children.

She said there have been many studies, and science backs up that gender identity issues are a sign of confusion in childhood and works its way out as they reach adulthood. She also believes LGBTQ is a choice.

Hitchman received a standing ovation when she asked the board of education to step back from the SOGI agenda.

“Do your homework, review studies,” she said.

One parent with three daughters, said he’s disappointed by the lack of consultation.

“My daughter came home from a one-hour presentation on transgender. We had no idea that was coming up.

“Why not incorporate parents into this part of education?”

As part of the new inclusion efforts, gender neutral bathrooms are in every school. Several books have also been purchased to educate readers about SOGI.

Several parents asked where the district came up with the “10 to 20 per cent of students don’t identify as strictly heterosexual.” Most felt the percentage is less than one.

Board chair Rob McFarlane told the parents he will respond to each of them via email along with the many other emails he has received.

“I respect free speech, but I don’t agree with your opinions. We decided for safety for all. There is power in words and words said tonight hurt people,” Tod said.

“It was Robert F. Kennedy who wisely said ‘the answer to intolerance is diversity. I’m glad we have education in our schools to educate against hate and intolerance,” said Coburn.

Bailie said many students are identifying as LGBTQ.

At any given high school in Langley, 352 students out of 1,900 could potentially identify as LGBTQ.

Of those, 19 identify as transgender.

At an elementary school, 74 students would identify as other than strictly heterosexual.

“It’s our little people, our adults, it’s our society. Parents of these students are demanding safer schools. Our biggest mandate is to create safer schools.

“Students report ongoing bullying in hallways, classrooms and they are coping by self harming, using drugs and sometimes committing suicide,” said Bailie.

These students have increased mental health issues and often face rejection by their families. Up to 40 per cent of Langley’s homeless youth identify as LGBTQ, she said.

‘CAN’T WE JUST BE HUMAN AND BE HAPPY?’

The Langley Times asked students who identify as LGBTQ+ and their parents to share their experiences at school, at home, whether they face harassment at school, and whether the efforts the district is making are working.

Numerous students from two high schools responded, as well as several parents, two of whom have transgender children.

“Can’t we just be humans and be happy … why does anything else matter?”

Another younger student who identifies as queer/asexual said, “Respect us. We are real and valid and offensive words hurt us.’’

One student suggested counsellors with specific training be offered to the LGBTQ community, assemblies talking about LGBTQ. Several asked that those who are using slurs and homophobic words be spoken to instead of looking the other way.

One student who identified as pansexual but isn’t out to anyone at school said they hear negative slurs at school and teachers aren’t doing anything about it.

Most LGBTQ students who were asked said some things are getting better at school, including less name calling, more understanding from peers.

But they also believed their individual schools could do more to bring awareness and compassion.

One transgender teen who was born a girl but identifies as a boy, said it hurts him every time someone calls him a girl.

“I am a boy and every day I fight myself just to be OK with being who I am. I don’t need to fight you, too.”

Some parents said they have done everything to support their child and believe the district has provided the right amount of support.

For one mother of a transgender student, it has been a steep learning curve.

“I was around the LGBTQ community when I first moved to Vancouver. When our child came out as transgender, I soon realized that there are many more terms I hadn’t heard of,” she said. There was some sadness of losing a daughter, but acceptance of gaining a son who was brave enough to be their true self.

Some students said they have been bullied at school or still hear homophobic slurs. But those who responded said their core group of friends have been very supportive.

“We’re not asking people to change their personal beliefs, but we do want everyone to feel included, connected and safe – everyone has a right to those ‘basics’,” said Bailie.

“We’re doing our best to explain why all our students deserve respect, kindness and a safe place to learn, but we’ll never convince everyone,” said Bailie. 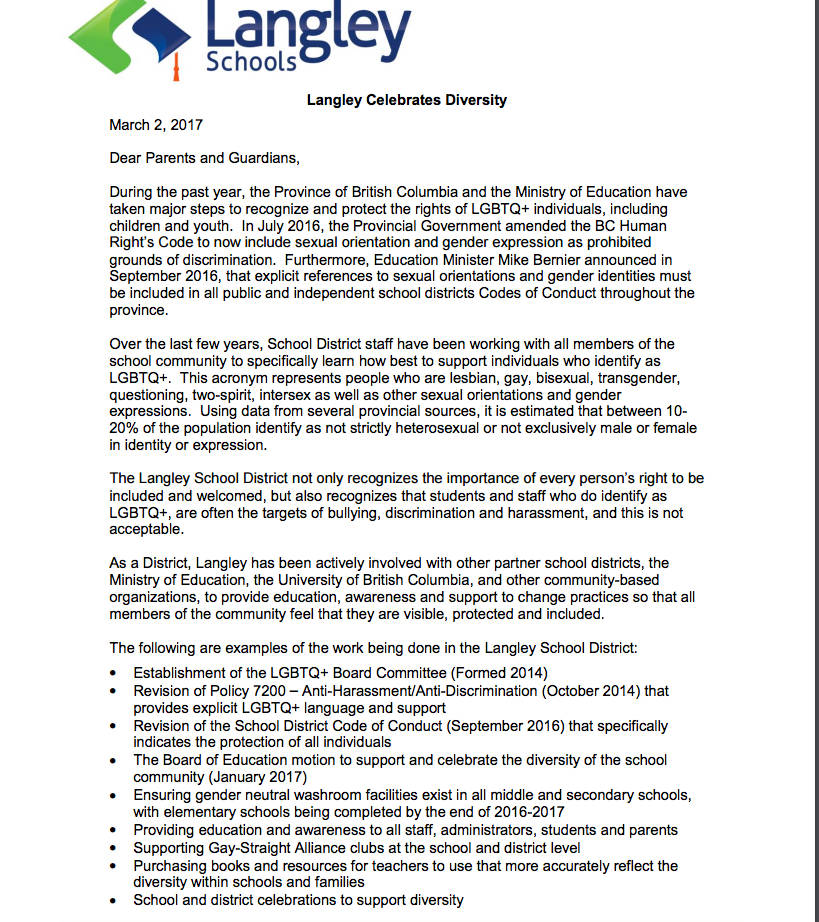