When Langley City resident Danielle Arbour heard the scratching and tapping sounds in the walls of her unit in the Centennial Manor, she thought it was noise from a neighbouring suite.

In the 20 years she and her daughter have lived in the subsidized housing complex currently managed by the Langley Lions Housing Society (LLHS) in the 20600 block of Eastleigh Crescent in Langley City, they had never had a pest problem.

“I keep my place clean,” she told the Langley Advance Times.

Then, about two months ago, mice appeared, running across her living room carpet.

“We found out [about the mice] from another neighbour who has had them for over seven months,” Arbour recalled.

“And by then it was too late and they were in our unit.”

“They chewed a hole into my living room,” Arbour elaborated.

“There’s numerous holes in my stairs.”

She found a “huge nest” of mice behind her fridge.

After that, she said, cockroaches arrived from another suite.

While she and her 24-year-old daughter Elizabeth McCallum have been battling the infestation, they estimate they have trapped more than a dozen mice over a two month period.

“It’s the stuff of nightmares and horror movies,” McCallum commented.

Arbour estimates they have spent hundreds of dollars on cleaning supplies alone.

At least two other suites in the subsidized housing complex have reported similar infestations.

On the advice of a pest control company, Arbour is keeping all her food in glass jars.

Food for her elderly 14-year-old dog Shi Tzu Zoey is now kept in the fridge, and Arbour washes out the dish immediately after feedings.

Doors have been taken off closets, and mice have chewed holes in the living room sofa-bed, she said.

“I saved up four years to buy that couch,” Arbour related. “Now, I can’t use it.”

After a nest was discovered in a freezer, in the back where the compressor motor is, it was unplugged and now sits unused in her front yard.

Arbour said the infestation appeared to coincide with the recent demolition of some older townhouses on the same street.

READ ALSO: How clean is your favourite local restaurant or café?

Jeanette Dagenais, LLHS executive director, said the society has received “confirmed reports from sources that state that the increase in mice is most likely due to the demolitions.”

Dagenais said the society has a pest control contract “with a reputable company that we have been working with for years of whom we have every confidence on their ability to deal with rodents and pests such as cockroaches.”

“In addition, our employees in the maintenance department have been working diligently to plug all holes and crevices with steel wool as was recommended by the pest control company,” Dagenais said.

LLHS took over management of the 36-unit building in 2008 after it was approached by another society.

Carl Johannsen, Langley City director of development services, said the City has begun requiring what are known as “rodent letters” from developers before any demolition proceeds – a document that shows the premises have been inspected by a recognized pest control agency to ensure the the demolitions don’t displace rats and mice to nearby buildings.

“We don’t want to have problems with rodents,” Johannsen commented.

At the time of the Eastleigh demolitions, letters were not an automatic requirement, but Johannsen said the developer has told the City that there did not appear to be a problem prior to the teardown.

Skye Jefferson, a resident of another housing complex on the same street, told the Langley Advance Times that they suffered a “severe” rat infestation around the time construction of a new housing project got underway last year, preceded by the demolition of an older building.

“Every day, all night, you could see hundreds [of rodents] running around, going into the garbage, etc.” Jefferson reported.

“Thankfully it has been fixed, but rats made 30-60 holes along side our building, walls and patio going under first floor patio flooring.”

Before that, the building had never had a problem in more than 20 years, Jefferson maintained.

For Arbour, the stress of battling mice and bugs is taking an emotional toll.

“I feel like a complete failure and I’m getting severely depressed, and we are both struggling with severe emotional distress and anxiety,” she expressed.

Arbour, who is on disability, said she and her daughter are trying to find another place, but there doesn’t appear to be anything in their price range.

This is a building with seniors, disabled and low income families mostly single moms and we can not afford to move,” she said.

She has even, out of desperation, looked into staying at homeless shelters. 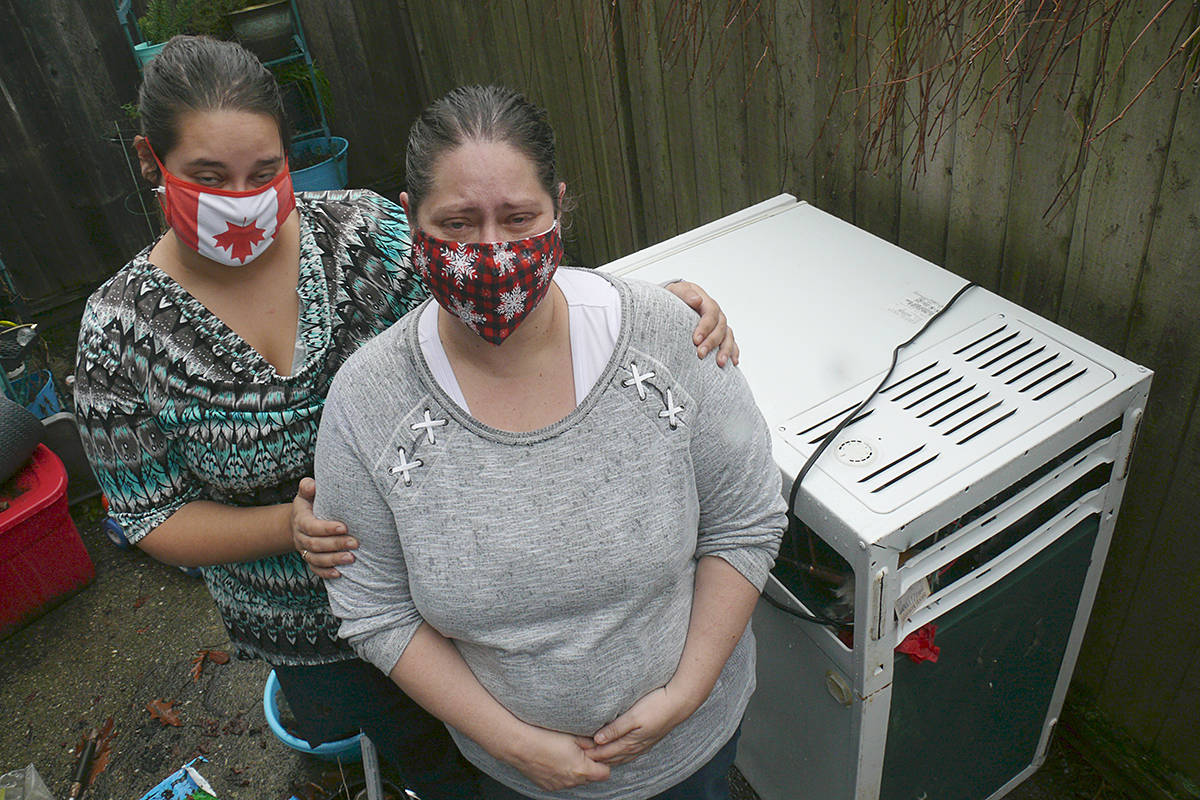 Danielle Arbour (R) and daughter Elizabeth McCallum stand next to a freezer that became home to a mouse nest. The residents of Centennial Manor are battling a pest infestation. (Dan Ferguson/Langley Advance Times) 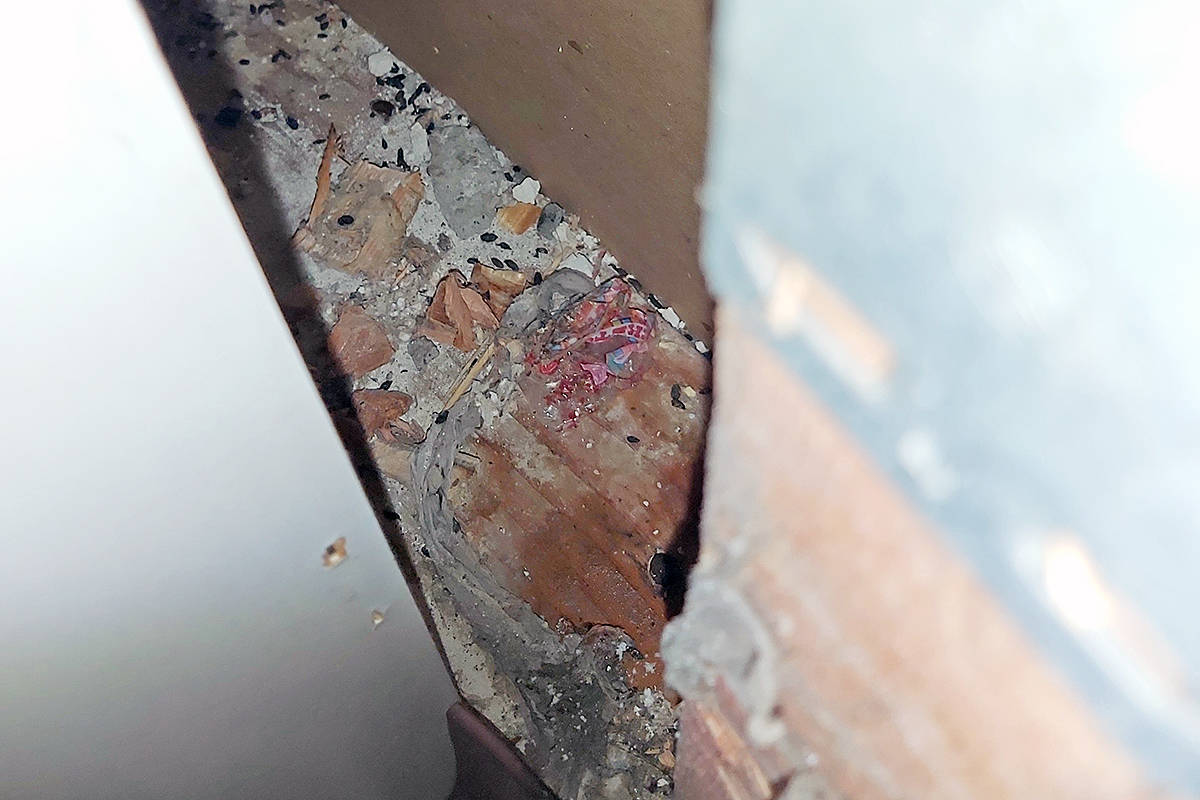 Danielle Arbour took a picture of a mouse nest found in the walls of her suite. (Special to Langley Advance Times)

BC SPCA calls for moratorium after minks, workers at farm contract COVID