It was a full house inside Township council chambers on Tuesday night, as nearly 50 people stood up to voice their opinions on the Brookswood-Fernridge Community Plan during a public hearing that lasted four and a half hours.

In fact, so many people turned up, that several had to listen from a separate room, and were brought in by staff when it was their turn to speak.

The majority of residents told council about their concerns with the draft plan, ranging from loose wording and environmental protection to infrastructure and lot sizes, while others urged them to pass the document as quickly as possible.

The draft community plan includes a range of housing — with 91 per cent single family, six per cent multi-family and mixed use, and three per cent manufactured home parks — along with a tree protection bylaw, seven new schools, 100 acres of additional park space and 50 km of new trails and greenways.

By 2042, an estimated 39,000 residents will call Brookswood-Fernridge home.

One of the largest groups represented at the public hearing were residents from Cedar Creek Estates mobile home park.

The draft plan changes the park’s land use designation from manufactured home park to rowhouse/townhouse, which had many speakers worried that the 150 senior residents who live there will become displaced.

Karen Jarvie said that the residents feel there is a “lack of understanding and compassion for our community.” The mobile home park is “not the Trailer Park Boys,” but rather a safe, affordable retirement community where seniors can age in place.

Four other mobile home parks located south of 26 Avenue have been protected with the manufactured home park designation, but Cedar Creek has not, she added.

An equally popular topic of the night was lot size, with multiple people speaking against the 4,000 square foot lots proposed under Single Family 3.

Brian Cameron said the argument that the smaller lots will help with housing affordability is a “red herring” and that the only winner will be the developer. He believes affordability can be reached by building smaller homes on 7,000 square foot lots.

He is also worried that the “lifestyle and character” of the area will be destroyed — the very features that drew him and his wife to Brookswood 30 years ago, despite both having to commute to Vancouver for work.

“I’ve been to a lot of these council meetings, I’ve watched your votes. In my experience, I see a lot of 5-4 votes pass, and I don’t like 5-4 votes,” he said. “I think if a plan is excellent, it’s nine to nothing — that’s what I’d be shooting for.”

Duncan Harpur feels he was “misled and taken down the garden path and maybe even fooled a little,” by the 4,000 square foot lots. He went to all of the engagement meetings, and says the smaller lots were only mentioned once, at the last meeting in May.

He’s concerned these will lead to the same parking problems currently seen in Willoughby.

“That’s not livable,” he said.

Darren Ramdour moved to Brookswood from England 12 years ago, and was attracted to the area by the large lots and character. He believes even 7,000 square foot lots are too small, and would prefer that the plan sticks to 10,000.

He also does not understand why there’s a rush with development, and “strongly feels” they can tweak the way Brookswood is by letting it develop slowly through coach homes and suites. In 10 to 20 years, the population will double that way, he said. And when further development happens, perhaps a referendum should be held.

“A lot of people are stressed here,” he said. “The feeling is not good.”

Anna R has spoken at many past public hearings relating to the Brookswood area, and believes the draft community plan has not changed much from the 2014 document that was defeated by council.

She thinks that lots should start at 10,000 square feet, with 7,000 square foot lots used for cluster developments to protect trees.

She is also very worried about the shallow and unconfined Brookswood aquifer, and whether it can support the population increase.

“This is a complete duplicate of what we saw in 2014,” she said. “I almost came with the same Powerpoint I had because there was no point in changing it.”

Kathy Marsden is also concerned about environmental protection, and wonders why no large areas are set aside for conservation. She said wildlife can’t be sustained in two-acre or half-acre parks, and feels that areas of Township-owned land should be turned into larger conservation areas.

Bob Langston is worried about how infrastructure will fare, with money for road improvements set to come from development cost charges. He doesn’t want the situation in Willoughby with 208 Street to happen in Brookswood-Fernridge, where portions are slowly widened over many years as new developments go in.

He also believes the language in the community plan needs to be tightened up as there are too many “open ended statements.”

“Are you guys going to be here on the last part of the plan? Probably not, so whatever legacy you leave, future councils will have to deal with,” he said.

However, not all were displeased with the plan.

Evelyn Faulkner brought a petition bearing 84 names, representing 47 properties in the Cedar Ridge south area, asking the Township to expedite development, and to make their area top of the list for the new neighbourhood plans.

She said she represents properties bounded by 43 Avenue, 40 Avenue, 212 Street and 208 Street, where most of the residents are over 55 years old and have no municipal water, sewer, lighting or sidewalks.

“This is hardly the way residents in the Township of Langley should be living in 2017,” she said.

Art Bergstrom purchased his property on 32 Avenue over 20 years ago with the understanding that development would come. He thought the 2014 plan was good, and believes the 2017 plan is as well.

He also agrees with 4,000 square foot lots because he wants to see developed land used to the best of its ability. He hopes that this will help protect “other pristine land” from being eroded.

Phyllis Heppner, too, said she is looking forward to development, and especially to shopping in her own neighbourhood. She believes higher density is not a bad thing, and that the plan could be tweaked a bit to retain the area’s country feel.

She does, however, think the density should be moved to the west side of 200 Street to help with traffic flow. 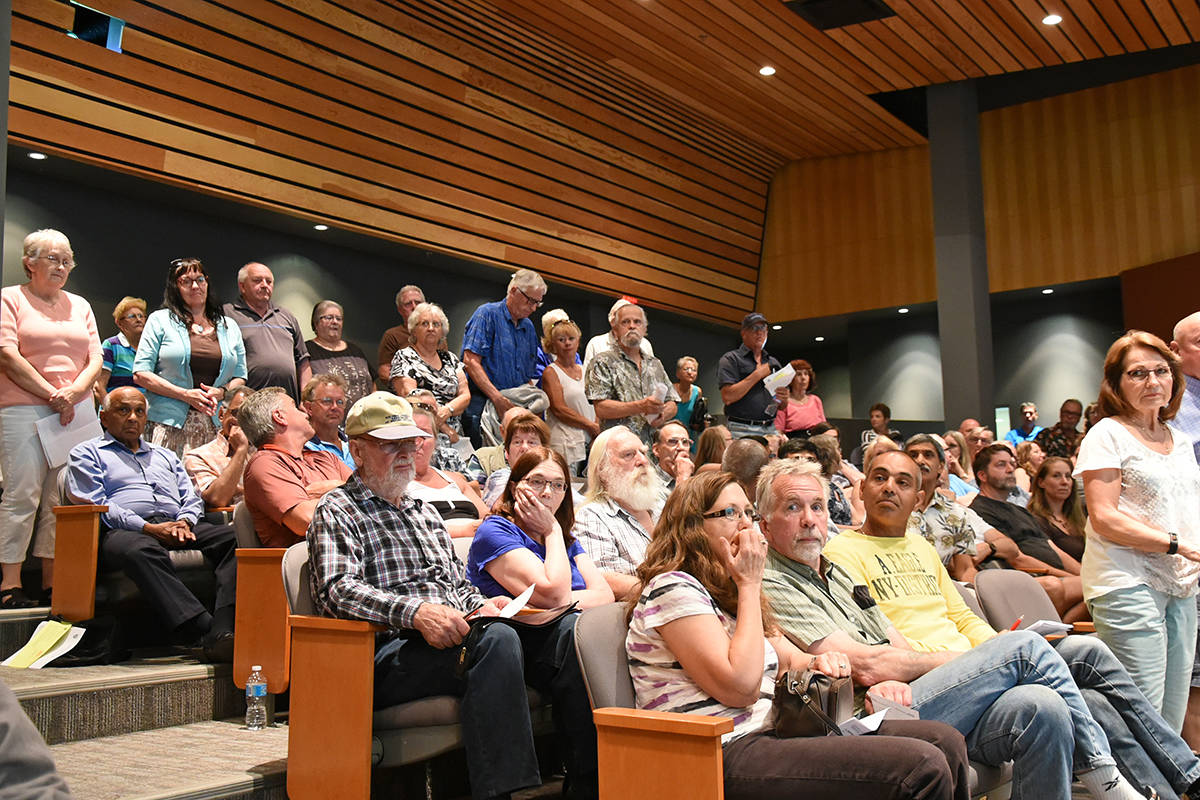 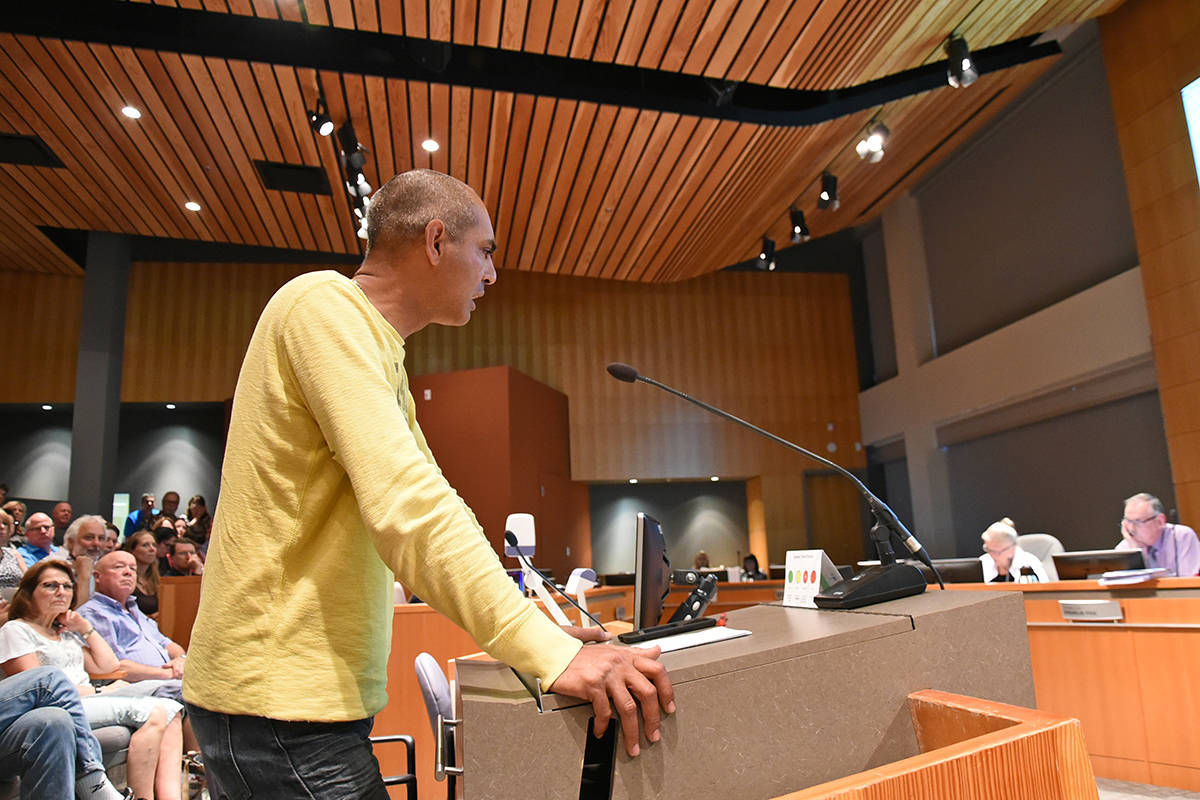 Darren Ramdour moved from the UK to Brookwood 12 years ago because of the large lots and character of the neighbourhood. Miranda Gathercole Langley Times. 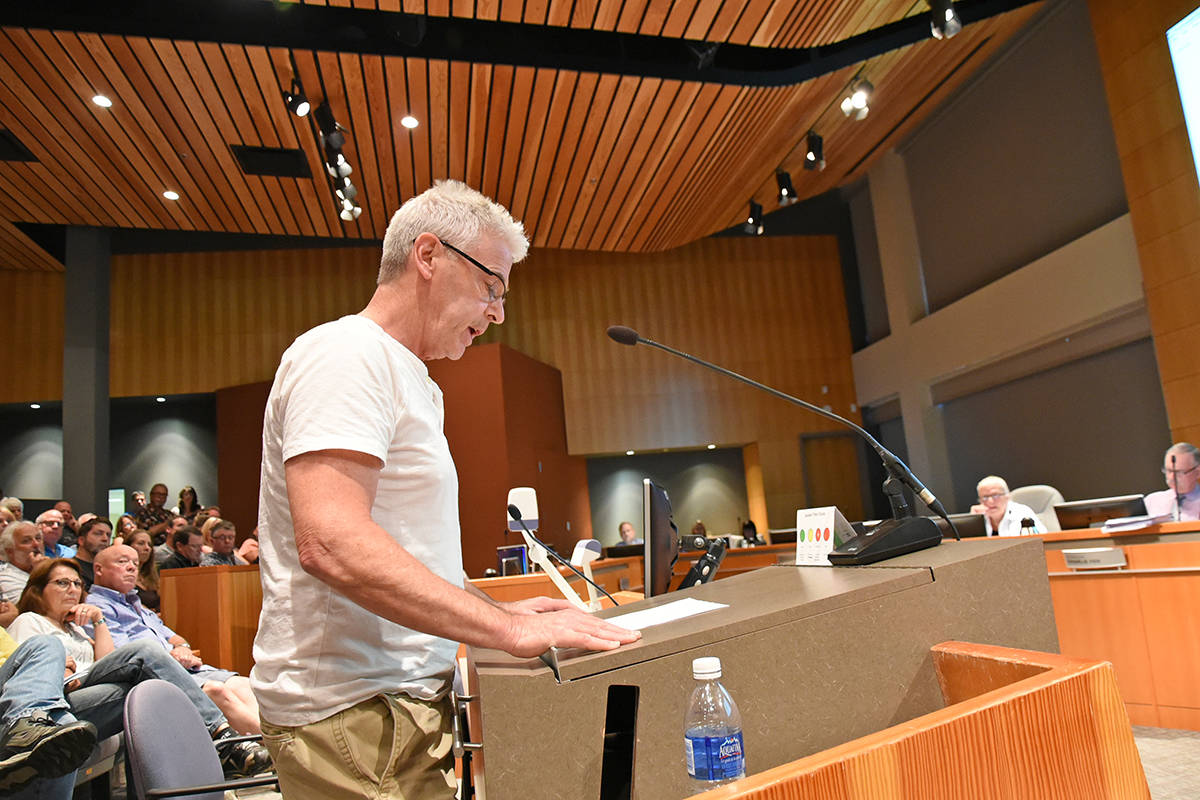 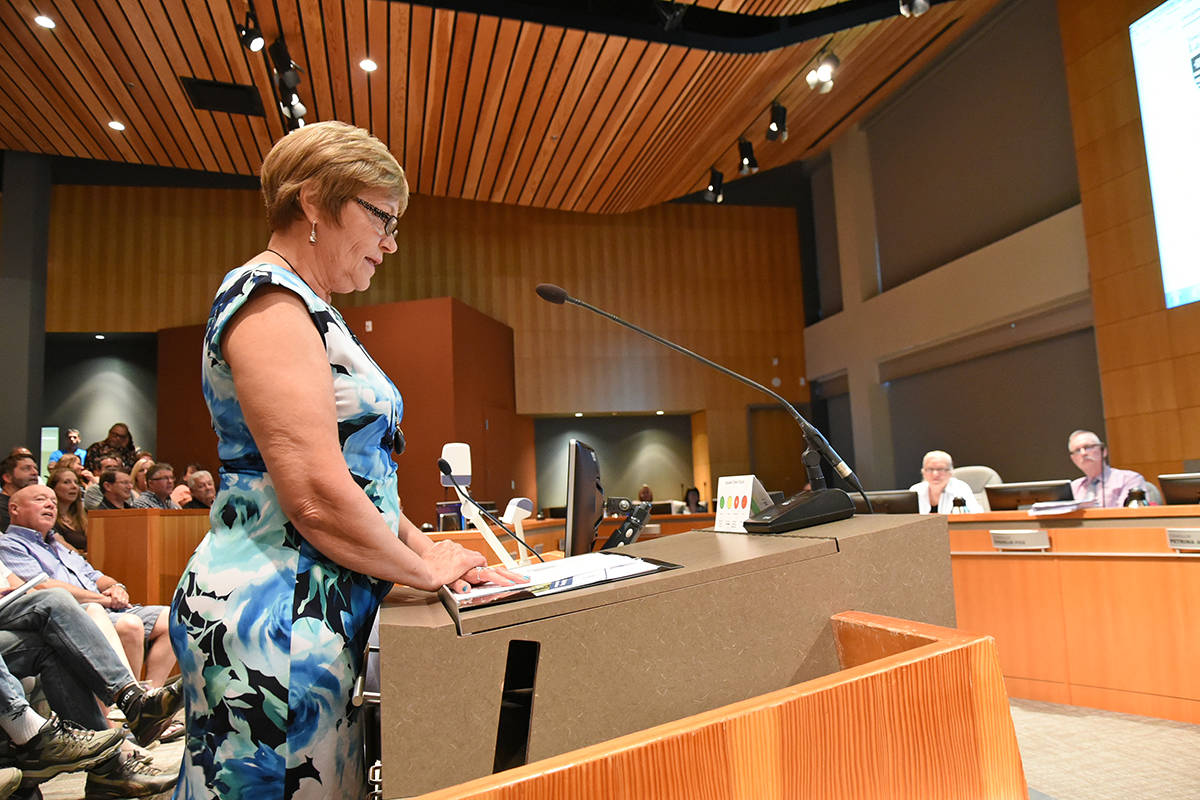 Evelyn Faulkner spoke to council on behalf of residents living between 40 Avenue, 43 Avenue, 208 Street and 212 Street, and urged them to move forward with development. Miranda Gathercole Langley Times.