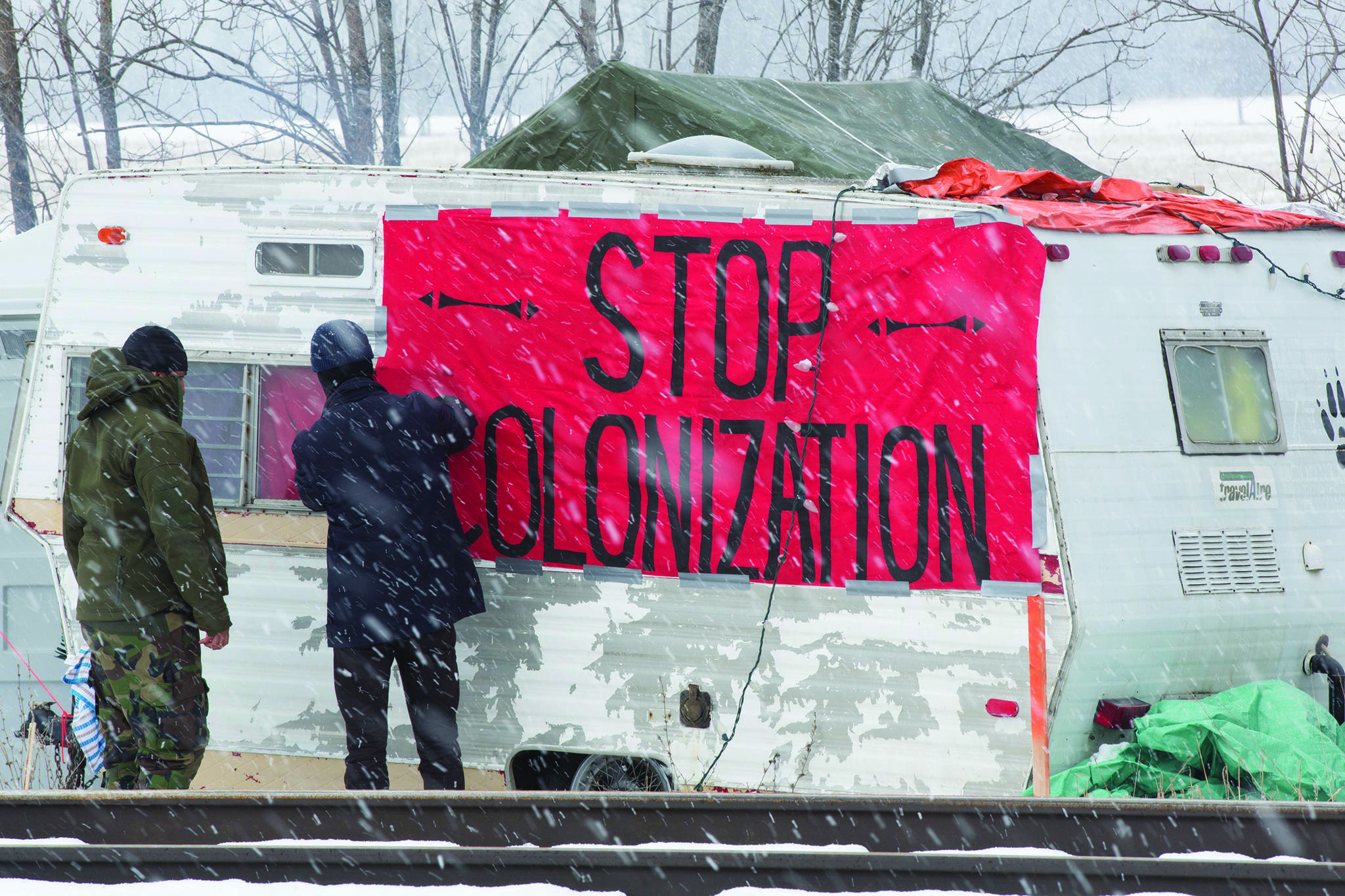 Protesters add a sign to a trailer at the closed train tracks during a rail blockade in Tyendinaga Mohawk Territory, Ont. on Thursday, Feb.13, 2020, in solidarity with the Wet’suwet’en hereditary chiefs opposed to the LNG pipeline in northern British Columbia. THE CANADIAN PRESS/Lars Hagberg

Amid pressure to end Indigenous protest blockades of vital Canadian rail links, Prime Minister Justin Trudeau said the disruptions must be resolved through dialogue, not by ordering in the police.

Trudeau acknowledged the difficulties the blockades have caused for travellers and businesses, but he made it clear Friday the federal government had no plans to make the RCMP dismantle them.

“We are not the kind of country where politicians get to tell the police what to do in operational matters,” Trudeau said in Munich, Germany, where he was attending a global security conference.

“We are a country that recognizes the right to protest, but we are a country of the rule of law. And we will ensure that everything is done to resolve this through dialogue and constructive outcomes.”

Scheer said the prime minister should tell Public Safety Minister Bill Blair to use his authority under the RCMP Act to end what he called the ”illegal blockades” by Indigenous Peoples at the centre of a dispute over a British Columbia pipeline project.

The disruptions are harming the Canadian economy and the livelihoods of farmers and small-business owners, Scheer told reporters in Ottawa.

“These blockades are illegal,” he said. “So far, the prime minister has refused to come out and call them that himself.”

The blockades began last week after the RCMP enforced an injunction against Wet’suwet’en hereditary chiefs and their supporters, who were blocking construction of the Coastal GasLink natural gas pipeline, a key part of the $40-billion LNG Canada export project.

Coastal GasLink has signed agreements with all 20 elected band councils along the pipeline route. However, Wet’suwet’en hereditary chiefs assert title to a vast 22,000-square-kilometre area and say band councils only have authority over reserve lands.

Scheer said a small number of demonstrators cannot be allowed to hold the economy hostage and threaten thousands of jobs.

“These activists may have the luxury of spending days at a time at a blockade, but they need to check their privilege,” he said.

“This is a complex situation and I think that that does not indicate an understanding of the situation,” he said.

Demonstrations continue as political leaders look to negotiate solutions, while business leaders, opposition politicians and members of the public call for immediate action to end the disruptions, which have already resulted in more than 80 arrests.

Tensions were expected to heat up on Friday with the threat of activists planning to shut down government offices in British Columbia’s capital. However, protesters numbered only in the dozens by midday and Victoria police posted on Twitter that the “peaceful” demonstrations appeared to be wrapping up in the afternoon.

Trudeau and B.C. Premier John Horgan spoke Thursday about the need to work together to resolve the disputes that have resulted in solidarity blockades in Ontario, Manitoba and B.C.

Indigenous leaders in B.C.’s northwest have invited federal and provincial politicians to meetings to find solutions, and said they would ensure a blockade of a Canadian National Railway track near New Hazelton, B.C., would come down during talks.

The railway said Thursday it was starting a progressive shutdown in the East, while Via Rail cancelled all service on CN tracks in Canada.

The Mohawk Nation said its members have agreed to meet with federal Indigenous Services Minister Marc Miller on Saturday morning at a blockade on Tyendinaga Mohawk territory near Belleville, Ont., which is now in its ninth day.

The minister’s office did not immediately reply to an email seeking confirmation he is attending the meeting, although Miller did request one on Thursday.

“This is becoming a very serious threat to the entire Canadian economy,” Kenney said in Edmonton.

“This is a commodities-producing country, and we ship those commodities by rail.”

In eastern Quebec, the president of a railway company said a blockade in the region is costing his company about $15,000 a day in revenue.

About five or six people from the Mi’kmaq community of Listuguj have set up a campsite about a metre from the tracks, said Eric Dube, president of the Gaspesie Railway Society.

“It seems like they are going to be there a while,” he said. “They are very determined.”

Groups including the Grain Growers of Canada, the Forest Products Association of Canada and the Canadian Manufacturers and Exporters have said rail delays are hurting members and the economy.

Teamsters Canada, the country’s largest union in the transportation sector, called on the federal government to intervene. The union warned the impasse could put up to 6,000 employees at CN and other rail companies out of work.

Garneau said freedom of expression and the right to peaceful protest are among the most cherished of rights, but added he is “deeply concerned” about the rail disruptions.

There is a risk of seeing the stoppages merely as interference with the operations of profit-making companies, yet they affect all Canadians, he told a news conference Friday in Toronto.

“It is about people’s jobs and livelihoods and about the transport of key supplies like food, propane, heating oil and chemicals for water treatment, agricultural products for export and so many other products.”

Garneau, who was meeting his provincial and territorial counterparts, as well as representatives of national Indigenous organizations, stressed the desire for peaceful resolutions.

Horgan has rejected calls from the Opposition Liberals to seek immediate injunctions to end blockades and protests in B.C.

“We can’t just use force,” he said in the legislature. “It needs to be dealt with by co-operation, by consultation, by discussion so that we can all move forward.”

B.C. Liberal Leader Andrew Wilkinson said Horgan was taking an “entirely passive approach in the face of implacable protesters who are intent on shutting down constituency services, shutting down the universities, shutting down our transportation arteries.”