A dilapidated footbridge that prevented mourners from paying their respects at a roadside memorial has been given a new life this week, thanks to the kindness of several local strangers.

And it came just in time.

Dozens crossed the refurbished bridge Monday night to participate in a vigil marking the 17th anniversary of Carley Regan’s death.

The small group gathered, in wet and windy weather, to convey their “deepest sympathies” to the family. Some were also there to demand more severe penalties for impaired driving.

It was that day in 2003 when Carley, 13, her sister Jessica, 11, and friend Raeline were travelling the shoulder of 36th Avenue on rollerblades just after 5 p.m.

Moments later, Carley was struck and killed by driver Paul Wettlaufer, who fled the scene, leaving the young teen to die.

Wettlaufer went on to serve 10 months of a 14-month prison sentence for the crime, which included a ban from driving for 10 years.

Carley’s uncle Jim, who attended the vigil, said Jessica managed to narrowly escape the car by jumping into the ditch that runs adjacent to the road. A bridge was later built over that ditch, providing access to Carley’s memory.

Through the years that wooden walkway decayed and was unsafe to walk over, Jim explained.

“Most of our family, still to this day, don’t even drive down this road anymore. They just can’t,” the uncle expressed.

Several members of the Regan family chose to visit Carley’s gravesite Monday, instead. But they made their appreciation known to those who donated their time and the resources to remake the old bridge.

“She wanted to be a veterinarian,” he reminisced.

Once he found out about the new bridge, Carley’s father Barry was “blown away” by the kindness of the community, even from afar at his home near 100 Mile House.

“She was a very happy teen that would do anything for those she loved and expected nothing in return,” dad retold.

Barry plans to travel to visit the site on what would have been her 31st birthday in April.

He is likely to see a memorial covered in Carley’s favourite colour – red – with dozens of blooms planted by generous people from the community.

An arborist, who chose to remain anonymous, will manage the upkeep of the memorial for years to come, Gary added.

The plan is also to install benches, he added.

Member Andrew Bessem said the group came to “support the cause” and proclaim the injustices both in the legal aftermath of Carley’s death and other instances of impaired driving across the province.

In June 2005, “Carley’s Law” – a proposed bill setting a minimum four-year jail term for anyone convicted of hit-and-run causing bodily harm – was struck down in the House of Commons.

Bessem, also a father, teared up when he saw the pictures of Carley and her sister, made visible by candles lit at the roadside vigil.

“I lost my son to a drunk driver – so this hits home for me,” he shared.

“We knew it had to be someone living nearby because the only people who drive this road are those heading home.”

Driver Paul Wettlaufer eventually turned himself in and pled guilty for three counts of hit-and-run and one count of driving while prohibited.

A charge of dangerous driving causing death was dropped. In 2009, Wettlaufer appealed for his licence in court.

It can be assumed that after a 10-year driving ban he is now back on the road, her uncle lamented Monday night. 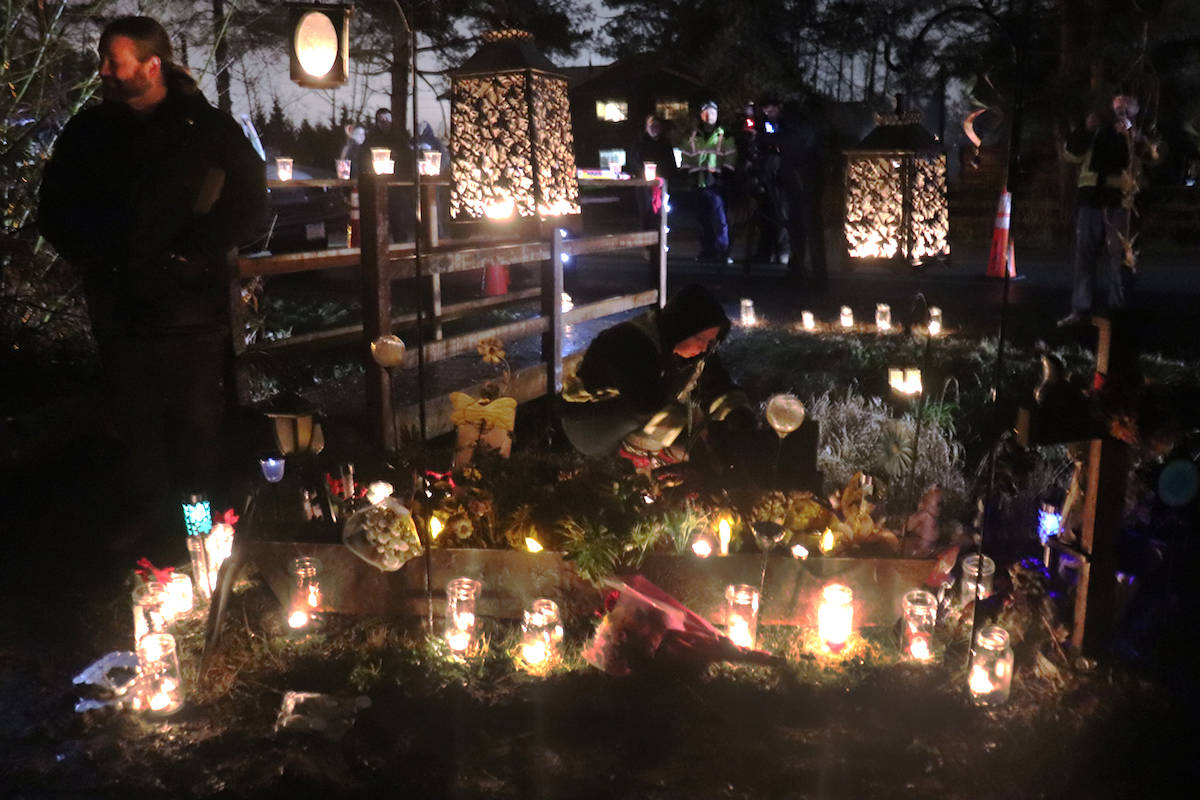 Mourners from Aldergrove gathered Monday at a roadside memorial on 36th Avenue to honour a young life that was ended abruptly 17 years ago to the day. (Sarah Grochowski photo) 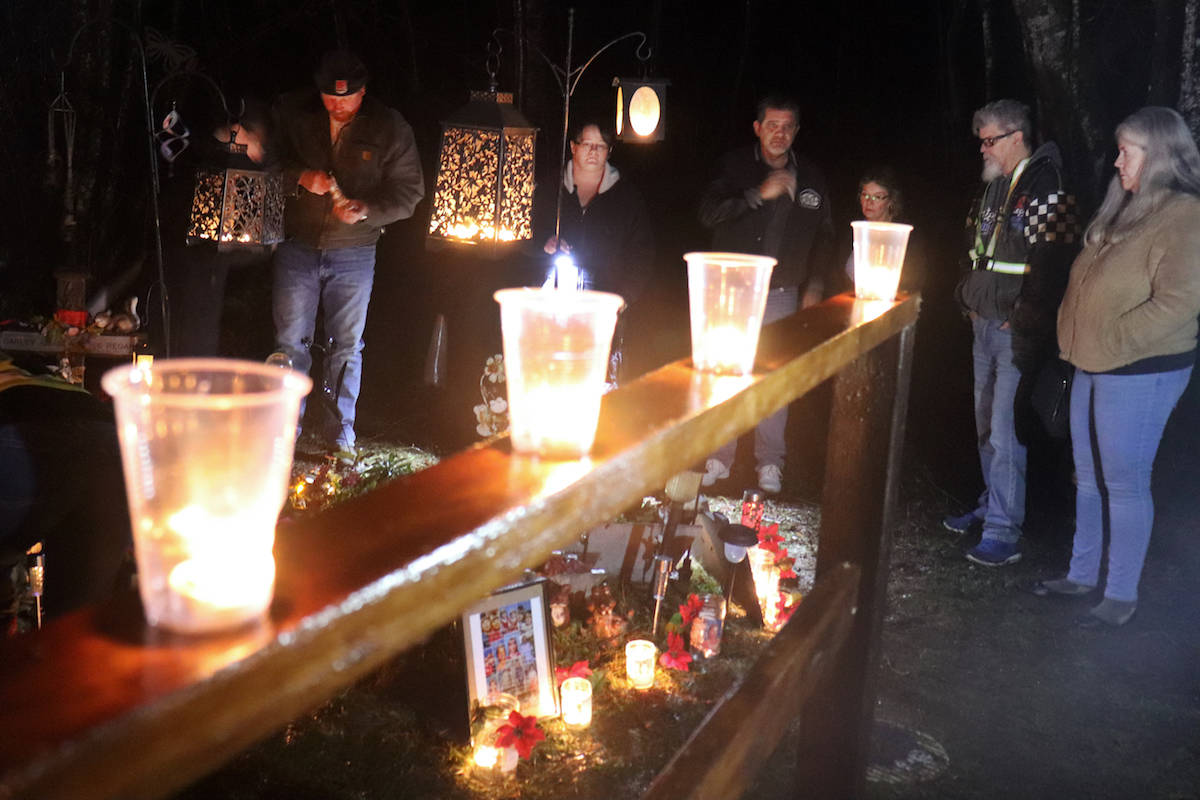 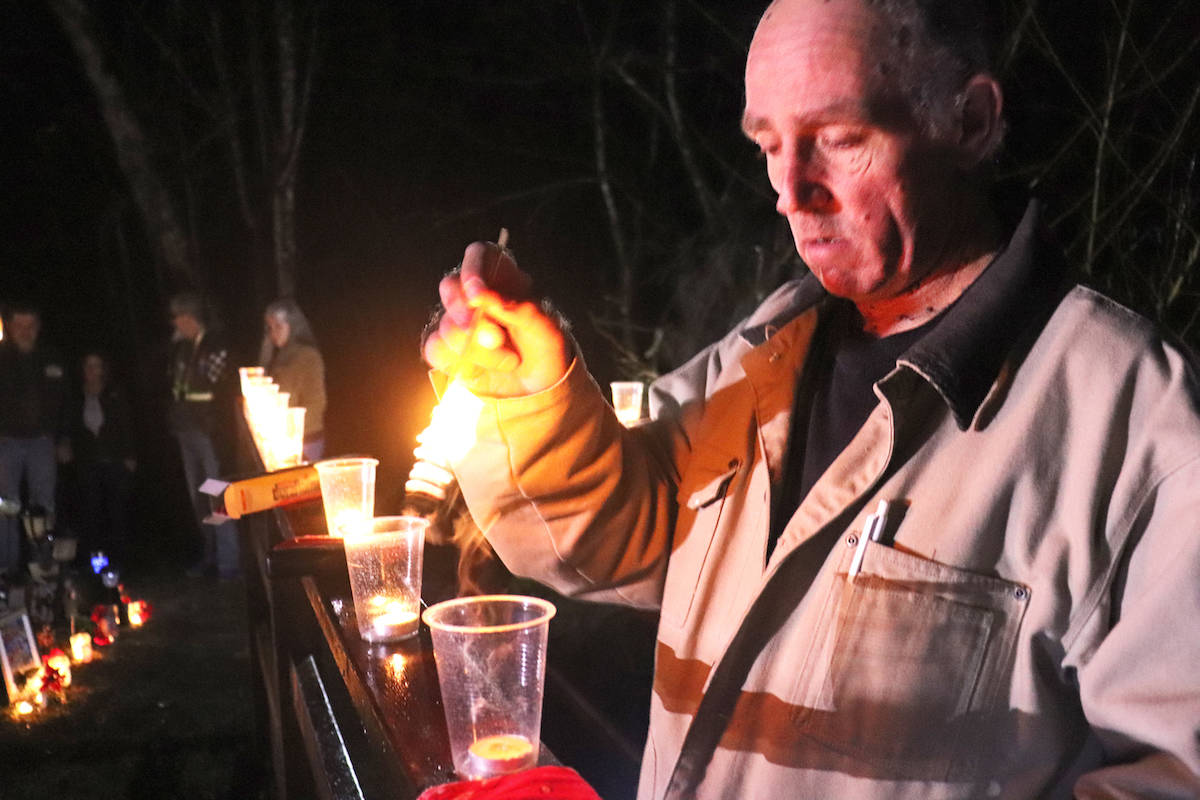 Several strangers to the Regan family organized the vigil, which centred on the construction of a new footbridge that allows easier access to the site of remembrance. (Sarah Grochowski photo)