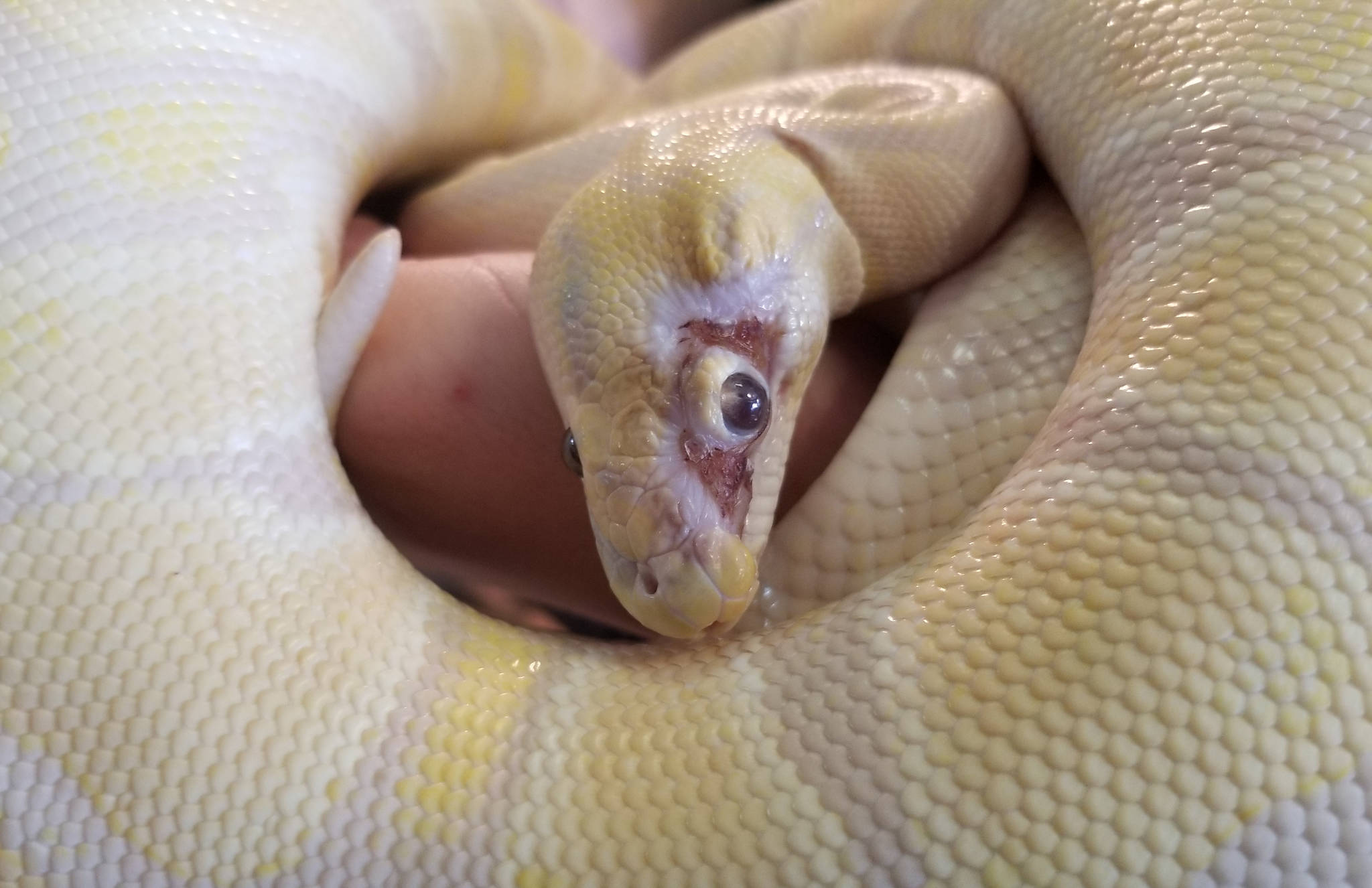 Chase the snake, with the after-effects of mouth rot visible on his face. (Eric J. Welsh/ Chilliwack Progress)

The snake doesn’t say anything, because he’s a snake and therefore can’t talk, but if he had the ability to form words he’d say a big thank you to a 12-year-old Chilliwack boy who helped save his life.

The boy is Chase Viens, and it’s his love of lizards that kept the snake alive when the situation was dire.

Amber Quiring, owner of The Reptile Room on Young Road, said the small ball python came into care with an infection in its nostril that proved resistant to antibiotics and progressed into something worse. According to the internet, a condition called ‘mouth rot’ happens when a reptile’s immune system is weakened by stress and bacteria is allowed to grow unchecked in its mouth.

That’s what happened, and to keep this mouth rot from spreading, this snake had to sacrifice a significant chunk of its face.

RELATED: Seven-foot boa constrictor briefly on the loose in a Chilliwack neighbourhood

This happened at a bad time, with Quiring struggling to make ends meet. Far too many reptiles were impulse-bought by bored people during COVID, only to be given up once it became apparent looking after a reptile isn’t as easy or inexpensive as you think.

The Reptile Room was nearly overrun by surrendered animals.

Enter Viens. The Vedder middle school student has been volunteering at The Reptile Room for three years as part of a junior program, coming in once or twice a week after school to clean cages, feed lizards and do whatever else needed doing. He hopes to become a veterinarian specializing in this type of animal one day.

A smart kid, Viens noticed that Quiring and company were doing a lot of good work on a shoestring budget and he decided he could make a small difference by raising some money. He started collecting bottles and cans from anyone who would give him bottles and cans. Every one or two weeks he took anywhere from four to 12 bags to the bottle depot and put the money on his account. With help from some friends and neighbors, he sold origami crafts as well and ended the year with more than $400.

He gifted that to The Reptile Room for Christmas, and what a timely gift it was.

The snake’s mounting vet bills, and the costs of his medications, were close to becoming too much to handle, with so many other animals also needing care. But the unexpected gift from Viens covered just about all of the snake’s medical bills.

As the snake was nursed back to health, Quiring knew she needed to find a way to recognize Viens for his generosity.

When the idea came to her, and she smiled.

When the boy came in one afternoon, Quiring told him the snake had been given a name.

Viens was overwhelmed and thought it was really cool.

Chase the snake is doing very well at The Reptile Room and will now play a role in Quiring’s educational programs, and Chase the boy is back to collecting cans and bottles, building up towards another donation.

Sometimes you give money and you don’t see the difference it makes. But every day that Viens volunteers, he can head into the backroom to say hi to Chase and know that he played a huge role in saving its life. 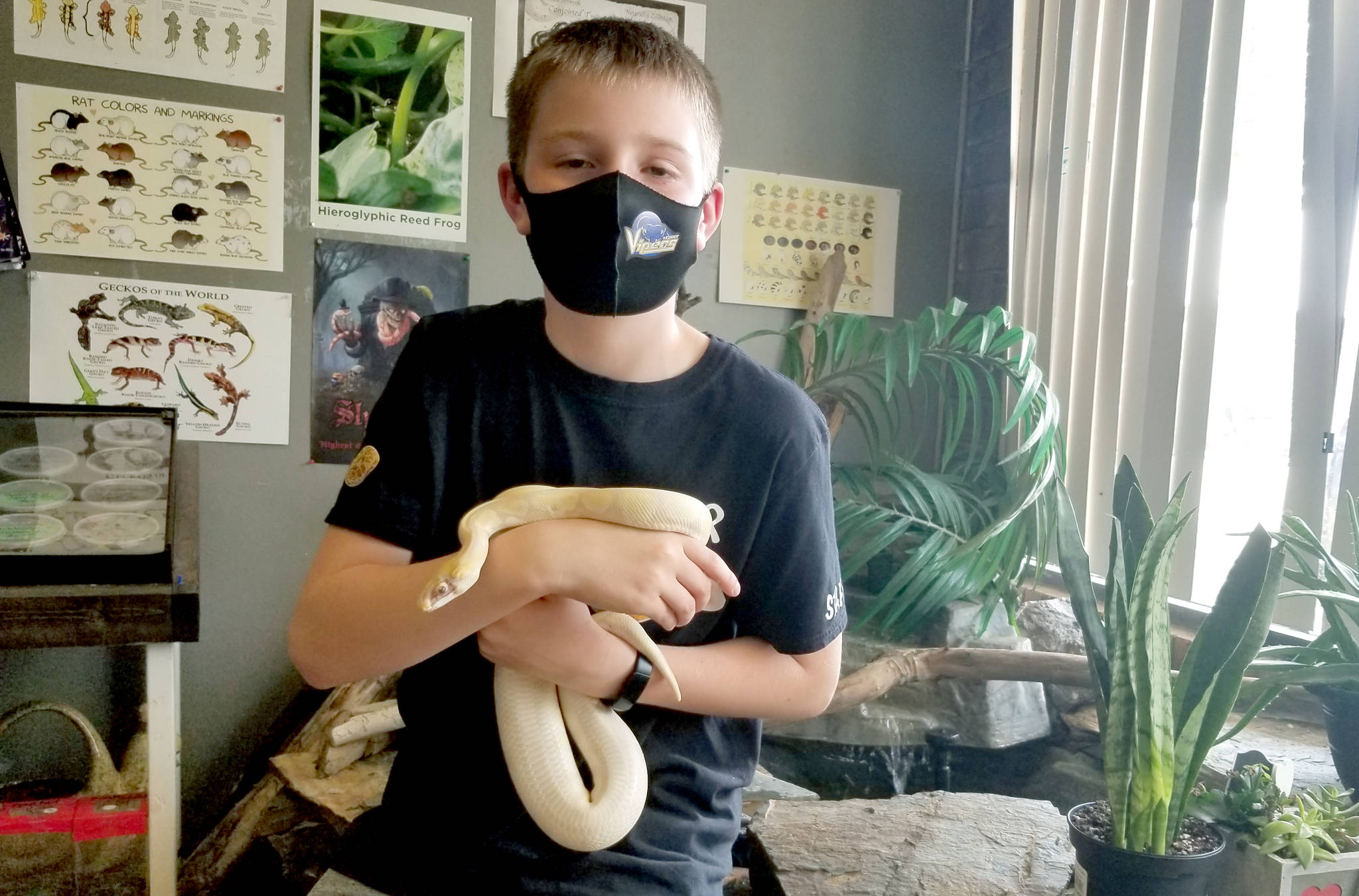 Chase Viens checks in with Chase the snake during an afternoon volunteer shift at The Reptile Room. (Eric J. Welsh/ Chilliwack Progress)

Font named after B.C. river could become the next Microsoft default