Christy Clark’s reign as leader of the BC Liberal Party is set to come to an end next week.

In a statement released Friday morning, Clark said she will be stepping down from the position, effective Aug. 4. This follows an election that granted her a minority government, but was stripped away by a non-confidence vote in the Legislature in June.

“Serving as premier and serving the people of British Columbia for the past six and a half years has been an incredible honour and privilege,” Clark wrote.

“I am so proud of everything our BC Liberal team has accomplished. From working to make British Columbia Canada’s leading economy and creating more than 200,000 new jobs, to helping thousands of single parents go from welfare to work through the single parent employment initiative, to British Columbia’s gift to the world, the protection of the Great Bear Rainforest.

“I am certain that British Columbia’s best days lie ahead. Because British Columbians can, through hard work, determination and perseverance, achieve anything they set their minds to.”

‘I was very emotional’

Former deputy premier and acting party leader Rich Coleman told reporters he was “emotional” from Clark’s announcement outside the Penticton Lakeside Resort where the BC Liberals were holding a caucus meeting Friday.

“I was very emotional. Surprised, absolutely,” he said. “Because I loved her as a leader. She’s been the greatest person that I’ve worked for.”

Coleman said the whole party, which thinks “the world of her,” was disappointed by the announcement, adding that it wasn’t an easy decision for Clark, either.

“She was struggling with what she wanted to do. I mean, she really does — at some point in time, I guess you come to the conclusion it’s time for you to move on and she has,” Coleman said “We will be forever grateful.”

Coleman said he believed it was hard on Clark to take a minority government and lose it within a couple of months, which may have influenced her decision.

“Your life changes pretty dramatically. I think she found a whole lot more time for her son and her family, as a result of this period of time, and reflected about what was really important,” Coleman said.

He noted it was her decision not to wait and see how the Green Party-NDP coalition fared, adding Clark had the full support of caucus at the time of her resignation.

“I think she just thought, ‘I want to give these guys a chance to renew,’” he said.

Political scientist Hamish Telford said he was surprised by the timing of Clark’s resignation.

“I thought that she would stick around, see if the NDP can pass a couple of budgets,” the University of the Fraser Valley professor said. “They have to do a budget quickly in September, then in the spring.”

Clark has likely given the NDP some breathing room to pass legislation, as she plans to step down from her MLA seat as well. It also likely gives them more time to govern, as the Liberals won’t want to vote down the NDP election and trigger an election, while they have an interim leader.

I want to thank @christyclarkbc for her many years of service on behalf of British Columbians. I wish her and her family the very best. 1/2

While we represented 2 different parties, we are united in our belief that our job is to work every day to build a better province. 2/2

Telford said he had expected Clark to take a lesson from Jim Prentice who resigned as leader of the Progressice Conservatives in Alberta and as an MLA on the same night he lost an election, a move he said “looked very sour.”

Telford said former Prime Minister Stephen Harper took that to heart and left and “gave a respectable amount of time” before announcing his resignation as leader of the Conservative Party and MP.

Clark had said she was ready to serve as the leader of the opposition, after the NDP and Green Party announced their plans to topple her government. A last minute shift in policy to include key points laid out in election platforms of both the BC NDP and BC Greens did nothing to alter public perception following the throne speech, which paved the road for a non-confidence vote.

“It’s one thing to say that when you’re still the premier, but when the reality hits, obviously the feelings change it’s either the reality of being opposition leader hits and it hurts,” Telford said.

He said the nearly 50 per cent cut in salary from about $200,000 as premier to $100,000 as MLA was also likjely a factor in her choice to resign. She can make a lot more money in the private sector, Telford predicted.

Leaving politics will also likely give her more time with her son.

“I think all of these things confronted her and she decided it would be to announce early, rather than hang on.”

Telford said he doesn’t expect the NDP government to call a by-election in her Kelowna West riding – a BC Liberal stronghold – very quickly. They are required by law to hold one withing six months of her stepping down.

Going forward, Telford predicts a quick leadership race to replace Clark, perhaps as early as this fall. The precarious NDP government and likely new election looming will probably entice a number of strong candidates to throw their hats into the ring, he said.

The leader of the BC Green Party released a statement shortly after news of Clark’s resignation as Leader of the BC Liberal Party and MLA for Kelowna West became public. Weaver struck a deal with new Premier John Horgan and the BC NDP to form a minority government in late May.

“I want to thank Christy Clark for her years of service to British Columbians, both as an MLA and as Leader of the BC Liberals,” said Weaver. “She has been a fierce advocate for British Columbia, here at home and around the world.

“A highlight of my time in the Legislature was working directly with Christy Clark to implement sexualized violence policy legislation for BC’s post-secondary institutions. Her leadership and willingness to work across party lines on this vital issue has made universities and colleges across this province safer for our students – and for this I am grateful.

“This experience illustrated what we can achieve when members of this house work together. I wish Christy Clark well in her future pursuits and look forward to developing a productive relationship with the next Leader of the BC Liberal Party.”

Coleman said he appreciated Clark stepping down, so the party could move more seamlessly to finding a new leader without bitterness from Clark.

“She’s got so much class that she’s decided she’s going to do this for us, give us an opportunity to go through a leadership situation without acrimony or issues,” he said. “We can actually get it done as a party going forward.”

The party now has 28 days to call a meeting to start the process of picking a new leader, and Coleman said that could come as soon as three months from now or as long as a year.

“I told the caucus this morning I have no intentions at this time to seek the leadership, and if I ever did change, I would step down,” Coleman said. “I don’t plan on stepping down.” 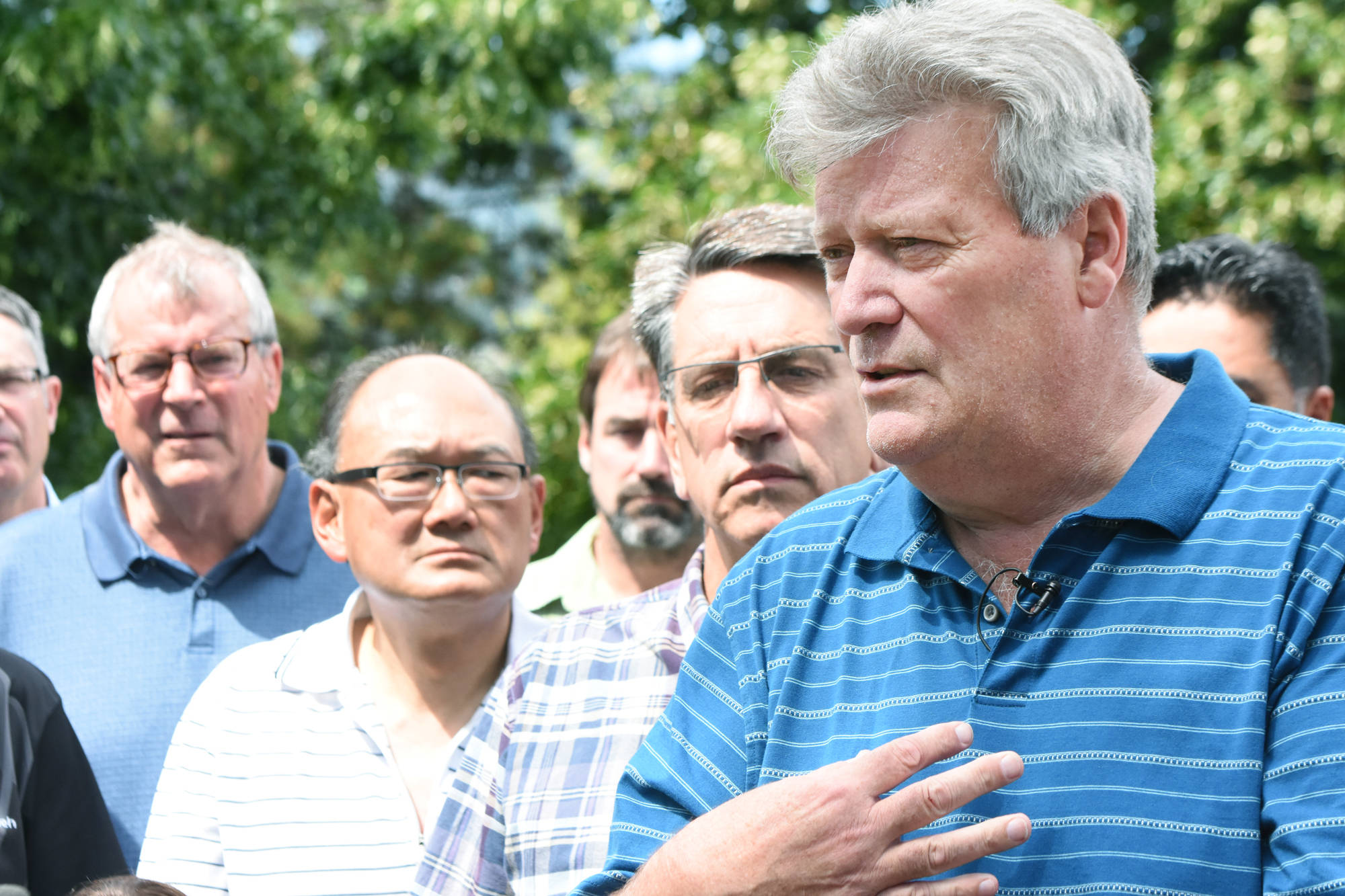 Rich Coleman talks about his time serving with Christy Clark who announced she was resigning as Liberal Party leader Friday. Penticton MLA Dan Ashton is to his immediate left. Mark Brett/Western News