Fishing boats lined the banks of the Fraser River at the Island 22 boat launch early Wednesday morning to take part in a bar-fishing demonstration that was not approved by Fisheries and Oceans Canada (DFO).

More than 50 supporters of the Fraser River Sportfishing Defence Alliance had showed up by 8 a.m. with plans to head out to a gravel bar to showcase traditional bar-fishing techniques.

DFO fishery officer Mike Fraser, from the Conservation & Protection branch, was on-site at the boat launch reading anglers the riot act after they registered.

“Just so you know this was not an approved or sanctioned fishery,” Fraser told some folks heading for a boat.

Federal fishery officers would be checking bar fishers throughout the day to ensure no one had salmon fishing equipment, and only bar fishing gear. Cpl. Chris Gosselin of the Chilliwack RCMP was also on-site at the boat launch to ensure public safety.

With such low returns of sockeye being reported, there is a critical conservation concern at play, Fraser said.

“It’s just not a good time on the Fraser River for this right now,” the fishery officer said.

There could be consequences in terms of ticketing or gear confiscation, if an angler is caught targeting salmon, or with salmon gear, Fraser said.

But the idea of the demonstration is to avoid catching salmon at all costs.

The goal is to prove they won’t catch sockeye while bar-fishing, and they’ll be recording the incidental catch, and reporting it to DFO.

Fred Helmer of Fred’s Custom Tackle noted on one of his blog posts that “the opportunity to fish on the Fraser River can and should be allowed during times of abundance.”

Being effectively shut out of the river has been a “flawed” course of action, he said.

“The DFO decisions to completely shut the recreational fishing down (on the Fraser) is flawed beyond any common sense,” Helmer wrote on a blog post.

Participating fishermen were spread out on the Fraser from Harrison Bar to Grassy Bar.

Bar fishers were asked to cast their lines from the gravel bars using a short leader length of three feet maximum, and heavier weights. They were using single, barbless hooks from a fixed rod, and a lure known as a spin-n-glow.

The demonstration went ahead despite a proposal for a test fishery having been turned down officially by DFO due to critically low sockeye numbers, and a 2020 management plan geared to protecting them.

Everyone’s right to a “public fishery” is at risk, and Helmer thanked the event organizers and supporters who are “busting their butts to address this crisis.”

The purpose of the demonstration is to gather data which can be presented as proof that recreational bar fishing is not the problem, but a sustainable method of fishing, according to organizers.

The frustration of some of the anglers was palpable.

“We’ve had enough. It’s time to stand up and be counted,” said Dean Werk, president of the Fraser River Salmon Society.

The “selective” nature of bar fishing, using a shorter leader length, has not been given a fair shake by DFO officials, he said.

“They say they don’t have the regulatory tools to enforce it, but it’s time they did,” Werk said.

They had requested an opening for 300 pieces in a selected test fishery for the late-run chinook, but were turned down due to concerns for dwindling sockeye, and the need to provide an FSC (food, social, ceremonial) chinook opening for First Nations.

READ MORE: DFO said no for conservation and FSC reasons

Do you have something to add to this story, or something else we should report on? Email:
jfeinberg@theprogress.com 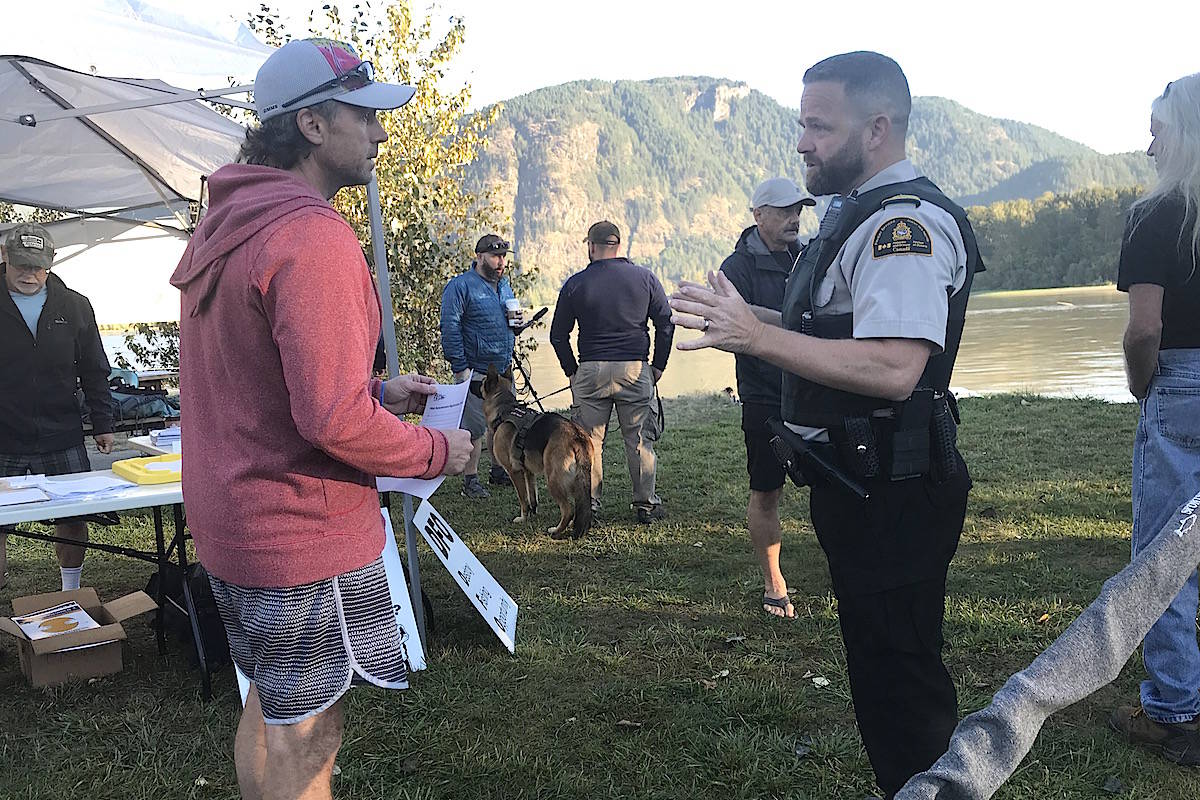 DFO fishery officer Mike Fraser chats with Valdy Widera of Surrey, near the registration table at the bar-fishing demonstration fishery, Sept. 9, 2020, at Island 22 Regional Park in Chilliwack, explaining the event was not sanctioned by DFO. (Jennifer Feinberg/ Chilliwack Progress)