The condo complex that burned to the ground Monday night will be rebuilt, said the president of the development company.

Built by RDG Yorkson Development, the project was dubbed Alexander Square, and according to its website, was completely sold out.

The developers so far don’t have much information on what happens next, as the site is still covered in smoldering rubble.

“At this time, we are continuing to work closely with the authorities to gather more information on what transpired and to determine the extent of the damage to the homes, following the unfortunate fire at Alexander Square in Langley,” said John Rempel, president of RDG Management. “Thankfully, the night watchmen who were on site were unharmed.”

He said RDG was “extremely grateful to the firefighters and other first responder, the RCMP, community members, and to the Township of Langley for their quick reaction and solid leadership during this time.”

As for what happens next, RDG won’t be able to assess the situation as far as rebuilding goes until the fires are completely out and they have access to the site.

“We are actively communicating with and updating all pre-sale customers, reassuring them that our mission is to complete our Alexander Square Community and reinforcing with them that we are committed to rebuilding it,” Rempel said.

He said that once rebuilding begins, existing tradespeople will be hired back if they are still available.

Alexander Square was set to open its doors to its owners in 2022, according to the company’s website.

The site has a long development history. Part of the site was originally approved for development in 2015 for a project dubbed A Poet’s Wynd – the site was then owned by former Langley developer Mark Chandler. Chandler is currently in prison in California after being convicted of fraud in an unrelated Los Angeles real estate project.

Chandler lost control of the site around 2017 in a court-order sale after creditors alleged $16 million was owed to multiple mortgage holders.

The project was re-started under new ownership with a different design and name.

Construction on the Alexander Square project commenced in fall 2019. 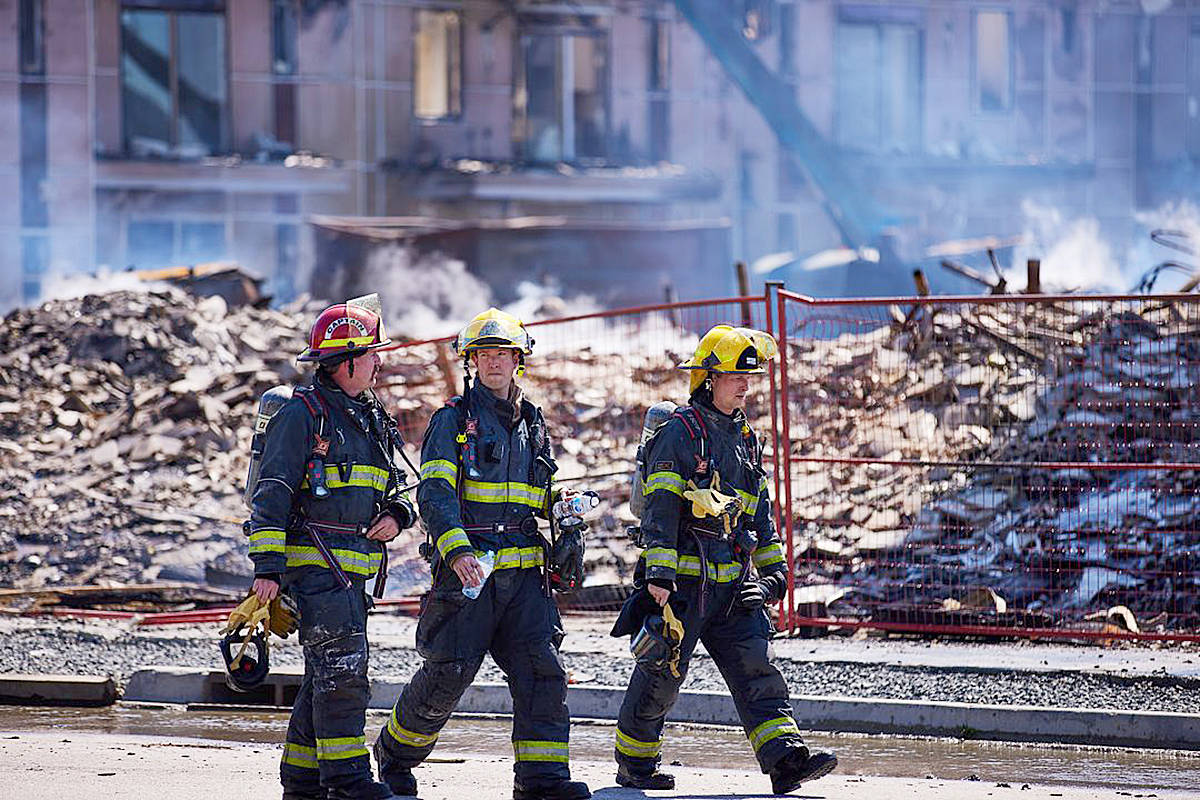 Firefighters walk past the rubble at the site of a construction site fire Tuesday, April 20 at 80th Avenue and 208th Street. (Rob Wilton/Special to the Langley Advance Times)