Coaches and parents are finding themselves on poop patrol at several Langley playing fields which they say are often covered in dog excrement.

The coaches of a Maple Ridge U13 soccer team spent their warm-up bagging more than 50 piles of poop at the Routley Park soccer field two weeks ago.

Parents from the team took to social media to express their disgust at what they saw at the Willoughby park, located at 19833 70 Ave.

This weekend Jon Luiten voiced his frustration at the amount of poop he collected while out for a morning walk at Aldergrove Athletic Park.

“I counted well over 20 turds around the soccer fields at the Aldergrove athletic park this morning,” said Luiten.

He added on social media: “Be a good human, please. Pick up your family members’ poop. It’s the law. And it’s respectful. Don’t be a turd.”

When the parks department does get a complaint about a particular park having a lot of dog excrement they call animal control (Langley Animal Protection Society) to do some patrols of the park. After hearing about Routley Park, he said he is calling LAPS to carry out patrols there.

“We have signage most everywhere prohibiting dogs off-leash. We provide bags at most of our parks and trails and we have signage reminding people to pick up after their pets. But it comes down to people choosing to be responsible dog owners,” said Buckner.

“LAPS is in charge of levying fines, but I’m not aware of what those fines are or if anyone has been fined.”

Not picking up your pet’s waste could result in a $100 to $10,000 fine, with a separate fine being issued for each day the offense continues, according to information posted on the Township of Langley website seven months ago.

There is potential for disease and pathogens in dog excrement, not to mention how disgusting it would be, as a player, to slide in the excrement.

His department hasn’t received any complaints recently about either park but not too long ago they were dealing with an issue of dog owners repeatedly letting their dogs defecate on the synthetic turf fields at Aldergrove Athletic.

“Often when we call in LAPS to patrol, they see a uniform and they behave in that moment. But it’s hard to catch people in the act. Oftentimes, people will take their dogs for a walk at night and let them off leash. If it is dark they may not see where their dog went,” he remarked.

Last year, the Township launched a pilot project dedicated to curbing unwanted pet waste. They put out multi-stream receptacles that have one bin dedicated to pet waste and another for garbage. The project is being expanded into popular Willoughby parks soon, said Buckner.

Dog poop is a problem worldwide.

A creative sign, that has its origins in the UK, has been turning up at parks and trails around Metro Vancouver and the Fraser Valley.

It reads: Want to start Yoga? Start by bending over and picking up your dog poo known as the “downward dog position” then PUT IT IN A BIN. 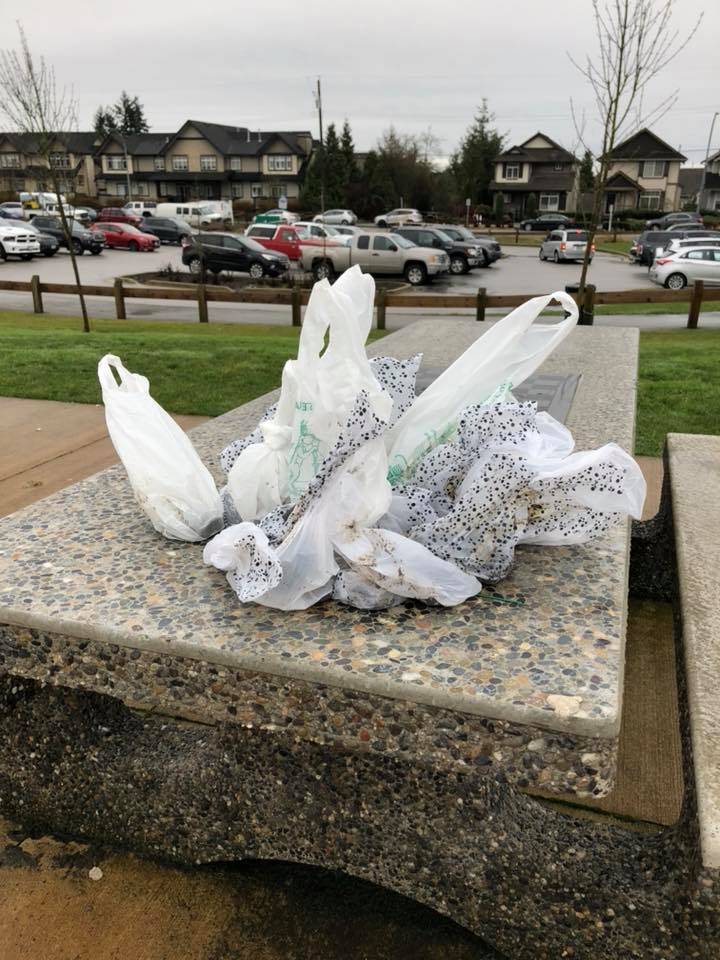 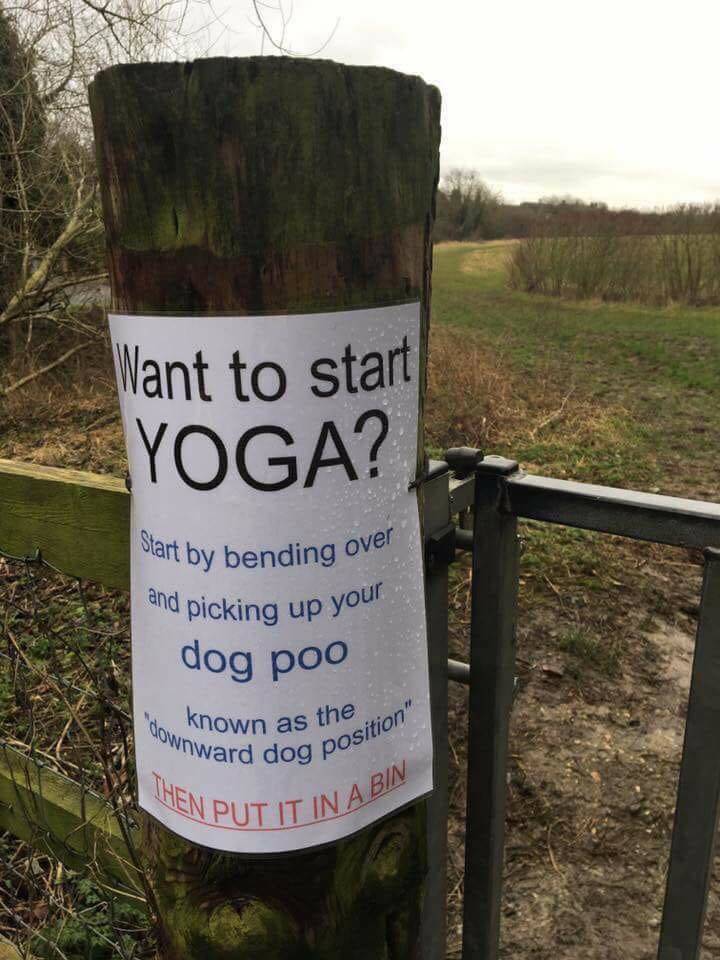