That was how Madeleine Pennal was feeling as she started Grade 8 at Walnut Grove Secondary on Thursday morning, wearing a mask and about to start her orientation for a very different year of high school.

Dropped off by her father, Mike, she said she was scheduled to take English and Social Studies in the first quarter of classes, which sees high school students take just two classes a day, rotating four times during the school year.

It’s one of many changes made to reduce the amount students move through the school, keeping learning groups separated from one another and reducing the chances of the coronavirus spreading.

“It’s better than a bunch of classes throughout the day,” said Madeleine.

After orientation on Sept. 10 and 11 for students, in-class instruction begins on Monday, Sept. 14.

The Pennals’ reaction was similar to how other families were feeling around Langley.

Sonny Bangac stopped and spoke with Langley Advance Times after dropping his son off for his first day of Grade 1 at Blacklock Elementary in Langley City.

“Excited and nervous, I think kids need it,” Bangac said. “At the same time nervous about COVID. Worried, but at the same time I feel it’s necessary for him to go back, otherwise he’s losing something else – social interaction, those early years.”

“I think he’s scared, but also glad to go back because he missed some of his friends,” said Bangac. “Also, soccer wasn’t happening since this happened so that was the other thing he lost. Hopefully that comes back too.”

“Yeah, you can teach them math and how to spell, but you can’t replace him seeing 30 other kids everyday.”

“We’re optimistically cautious, happy and nervous. I’m glad schools back, I guess. That will be my overarching feeling. Scared but glad.”

At Shortreed Elementary in Aldergrove, the school played Disney music, especially the them from Pixar’s Up!, to make students feel more welcome, while teachers greeted students out front and directe them to specified classrooms.

“We’re nervous, but I trust the school,” said Jennifer Weibe, dropping her daughters off at Shortreed. “We can’t wait forever, right? And some of us have to go to work and can’t stay at home with our kids every day.”

“I’m excited. I know two people that are going to be in my class,” said Nolan Brett, who is heading into Grade 5 at Blacklock this year.

“I think it’s nice to have them go back, but there’s also a lot of things to worry about,” said Nolan’s father, John. “It’s odd. I don’t know how long it’s going to last. I’m a little less worried I’d say than my wife, she’s a little more worried.”

“We’re just expecting that they’ll be a little more teacher presence in the classrooms, just watching over them,” said Kat Goheen, whose daughter Savannah is also starting Grade 5. “We’ll see what the distancing is like within their pods. [We’re] just excited about the normal stuff, to see who’s in her class. We didn’t go back in June, so happy to get back with everyday. The bell schedule is not super different, but we’ll see what it’s like… we’re not sure yet.”

Goheen said she wasn’t nervous, and trusted the schools to make good choices.

Welcome back! We hope you all have a great orientation this week. #Think35 #MySD35Community pic.twitter.com/cWyvvPJTYu

Some parents were enthusiastic about the return to school for their children.

Kevany said his son had done fine educationally during the shutdown that lasted most of last spring from late March to June, but he was missing social interaction.

“I think socially, it’s so important to get him back around friends,” Kevany said.

While speakers blared with songs like We Are Family and Boogie Shoes to welcome students back, teachers were at multiple entrances next to sign boards that detailed how students should enter the school.

“So far, so good,” said Jason Edge, a culinary arts teacher who wore a Walnut Grove Gators shirt for the return of students.

Edge was at one of the entrances, masked and giving arriving students directions on where to go.

The first wave of students at Walnut Grove on Thursday morning were all in Grade 8, as each grade got its own slot of time on Thursday or Friday for an orientation session.

For students just starting, it will be easier, said Sarah Jeszenszky, whose son started high school on Thursday.

She said she was feeling okay about the return to school.

“It seems like they’ve put some thought into this,” she said of the plans for cohorts and the physical separation inside the schools.

She said she was a little worried about the possibility of an outbreak of COVID-19, however. “Especially since the numbers have been going up,” she said.

We have been waiting a looooong time for this day to arrive! Excited to see all of the Grade 9 & 10 students on Thursday! And the Grade 11 & 12 students on Friday! 💚 #orientation pic.twitter.com/ZyEoI70Kz1 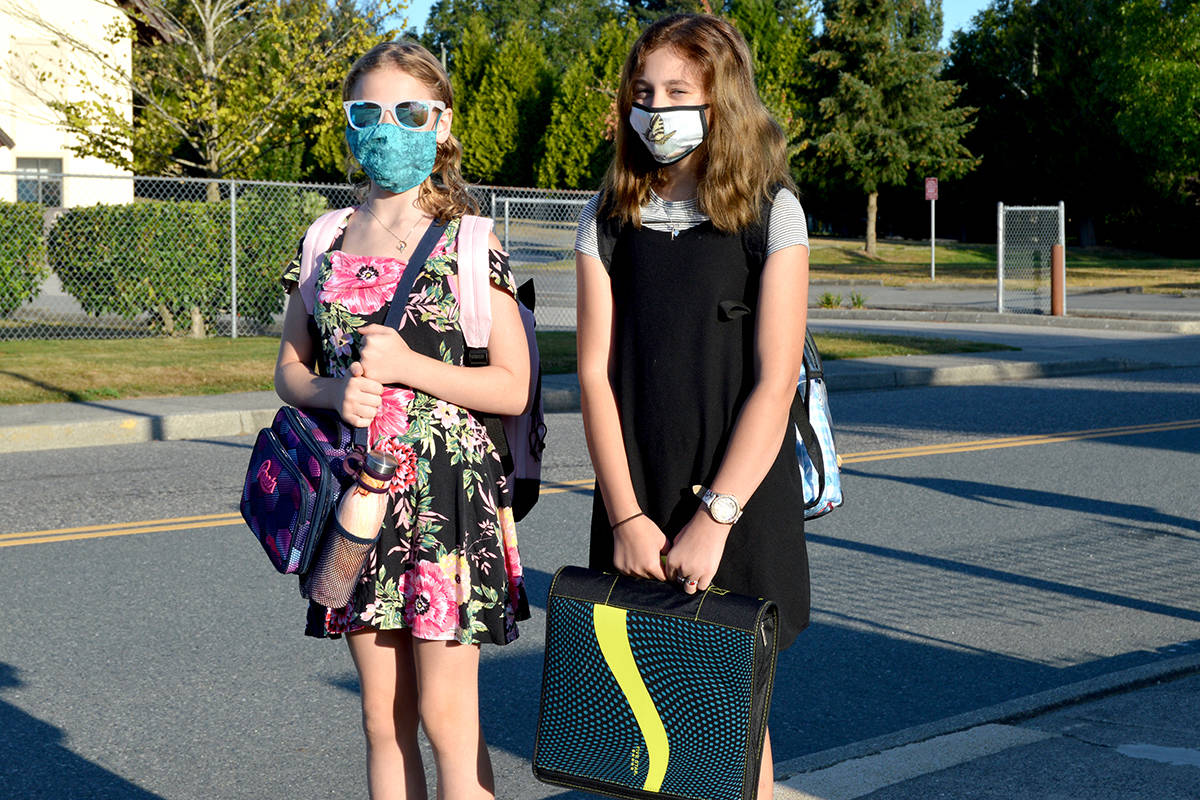 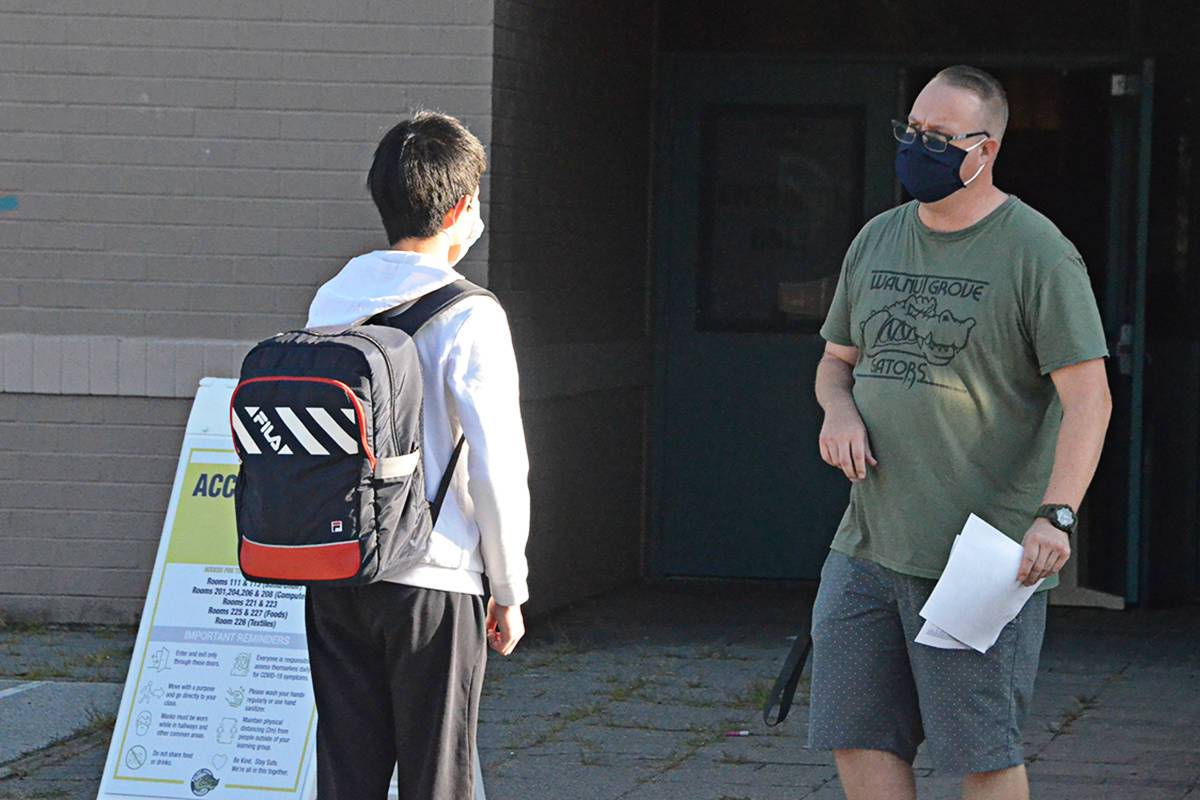 Former Mission principal claims he was ‘researching’ Creep Catchers, after being filmed in child-luring sting