The Janda Group unveiled its lofty development proposal for the long-derelict mall in downtown Aldergrove Tuesday night at the Kinsmen Centre.

The community information meeting envisioned the transformation of the central site for the Aldergrove Town Centre, in three distinct phases.

Phase One, which will be submitted to the urban planning staff at the Langley Township on Wednesday, includes mixed-use buildings labeled “A,” “B,” “C,” and “D.” Buildings “A,” “B,” and “C” contain a commercial bottom floor and storefront as well as five residential levels of apartments above.

“Ideally, this would help mom and pop shops reposition here in Aldergrove,” said Sonny Janda of the Janda Group, “Not national brands coming in and taking over.”

Building “C” will contain a commercial bottom floor as well as a mezzanine. All three six-storey buildings will house parking beneath for tenants.

Building “D” is to consist of a four-level “community parking structure” and six levels of residential housing above, ten-storeys in total.

“We are giving the parking structure back to the Township without any land-lift,” otherwise known as “at-cost,” Janda explained.

The Janda Group has worked with Township affiliates, including councillor Eric Woodward, to propose the purchase of the commercial parkade. It will serve as a facelift to Aldergrove’s downtown, resulting in a more walkable 272 Street for the community and its visitors.

The group is hoping the Township will offer a 43 per cent parking requirement reduction on the property. This reduction would be on par with parking space requirements for commercial developers in Fort Langley, first-term councillor Eric Woodward said.

“This parking structure would allow other businesses to not have to worry about parking spaces and instead build really cool urban developments,” Woodward elaborated.

“The community plan talks about centralized off-site parking but doesn’t address where it’s gonna be located,” Woodward said during his campaign speech in Aldergrove last September.

Instead of a typical two-year processing time before the go-ahead for developers of the project, the Janda Group can expect to see a faster response time.

Though rumors swirled at the estimated cost for the Township’s purchase of the parkade being $8 million, Sonny Janda said it really depends on a number of variables.

Phase Two of the town centre plan includes building “E,” which would consist of a mixed-use main floor and five residential levels above.

North of this building runs the Bertrand Creek and surrounding greenery, in which the development group plans to construct footbridges, widen existing walking paths and “reclaim more green space than before,” according to principal architect Colin Hogan of Abbotsford-based Focus Architecture.

“The goal is to get residential units with eyes on that creek and trails to make it safe and publicly accessible. Right now the paths don’t feel particularly safe,” Hogan explained.

“What we’re proposing is really not that different from what’s been set out in the community plan,” Hogan said.

“For Phase Three: instead of building two smaller towers that are listed in the plan we’ve proposed one large tower,” Hogan said about the 28-storey rental housing high-rise that was a contentious surprise to the public.

“It makes more sense to do it that way as it actually limits the amount of shadowing the towers cast,” Hogan added, addressing public concerns about the tower.

Other concerns were expressed about the revitalization project posing a threat to Agricultural Land Reserve (ALR) zones as more developers invest in town property.

“The single family house is the biggest threat to the ALR,” Hogan emphasized. “That’s where sprawl comes from, where we are forced to push out onto farmland.”

The Aldergrove Town Centre project is one of purposeful high-density, utilizing the unused central acreage in town, Hogan said.

“As the phases move along we will be here and involved for years,” Hogan finished.

Janda estimates a span of 4 to 5 years between the building of each phase, though if the Township significantly expedites the zoning approval process, the developer admitted to councillor Kim Richter that the group would be ready to demolish the old mall as early as spring next year.

“That is if we can get it through to third reading, which is approval and principal within six to eight months,” Richter said.

The Janda Group has owned the mall property since December of 2008. 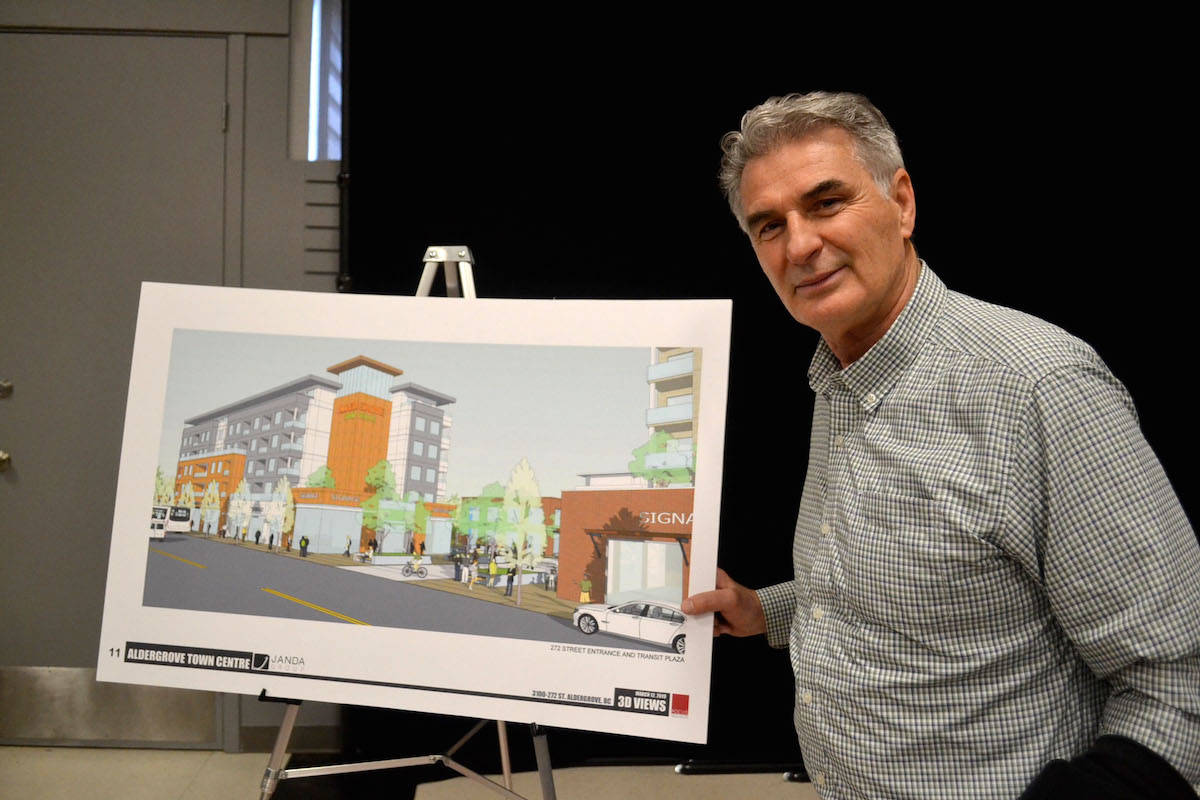 Steve Ferguson, a Langley Township councillor and former resident of Aldergrove, was over the moon about the proposal for revitalization. (Sarah Grochowski photo) 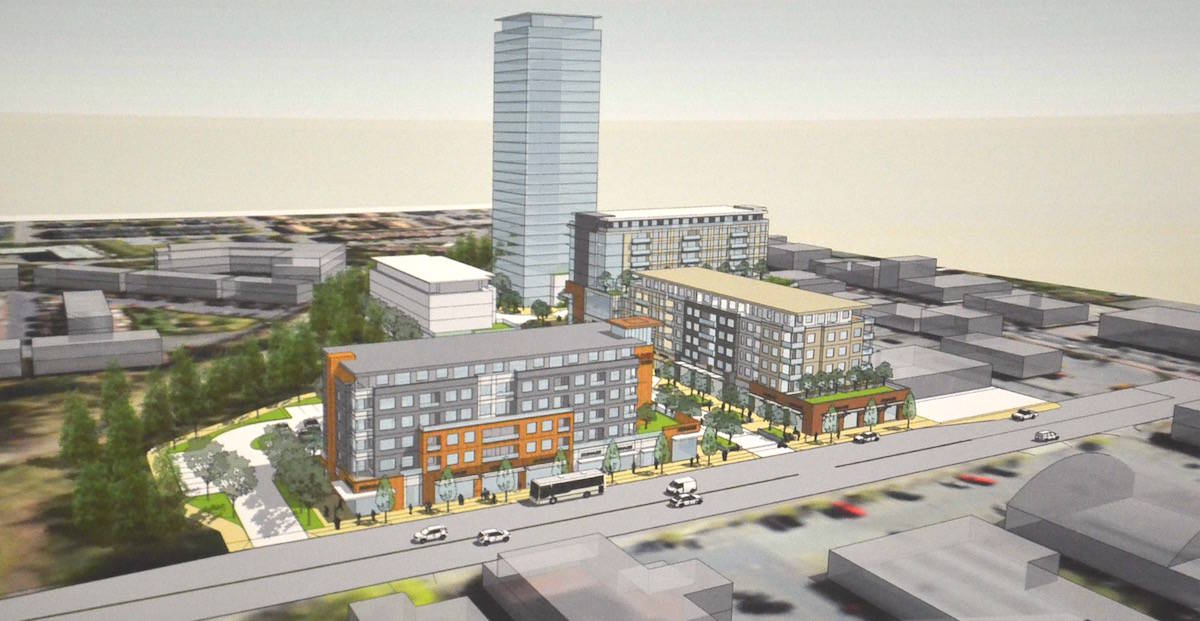 For Phase Three: instead of building two smaller towers that are listed in the core plan the Janda Group has proposed one large 28-storey tower. (Sarah Grochowski photo) 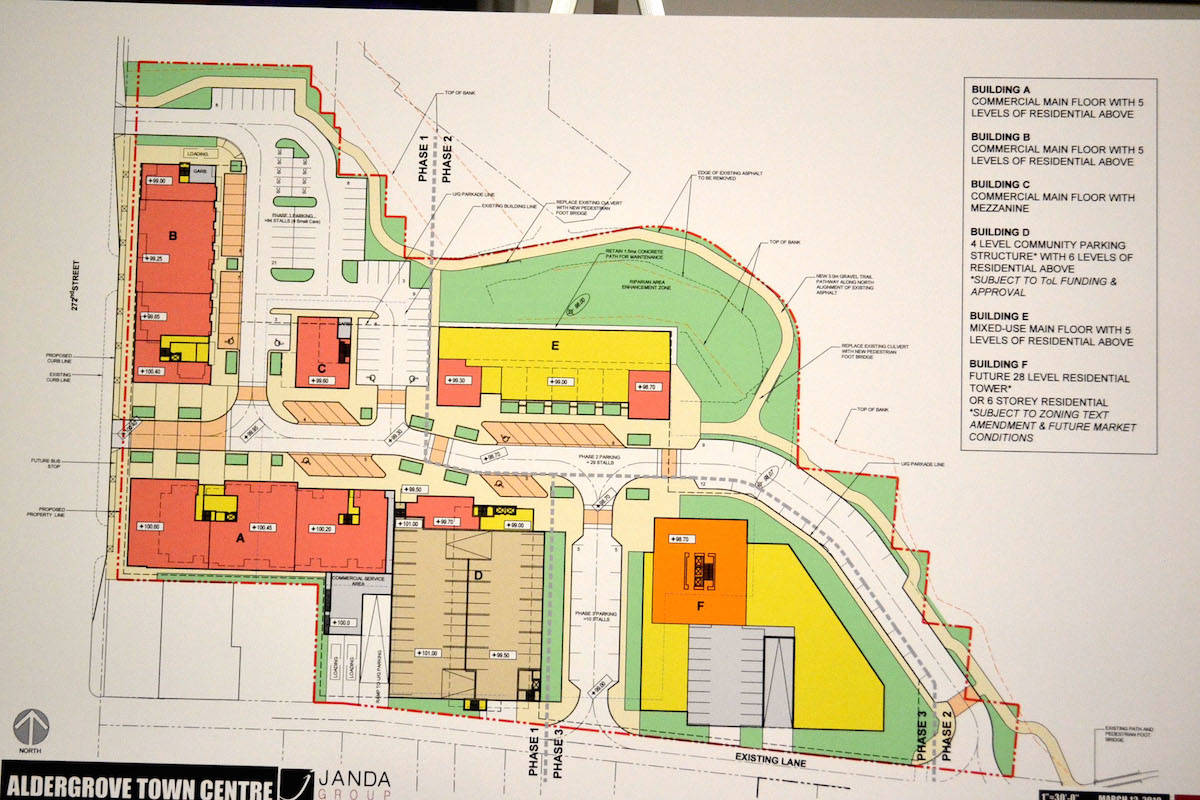 The community information meeting envisioned the transformation of the central site for the Aldergrove Town Centre, in three distinct phases that travel westward through the property. (Sarah Grochowski photo) 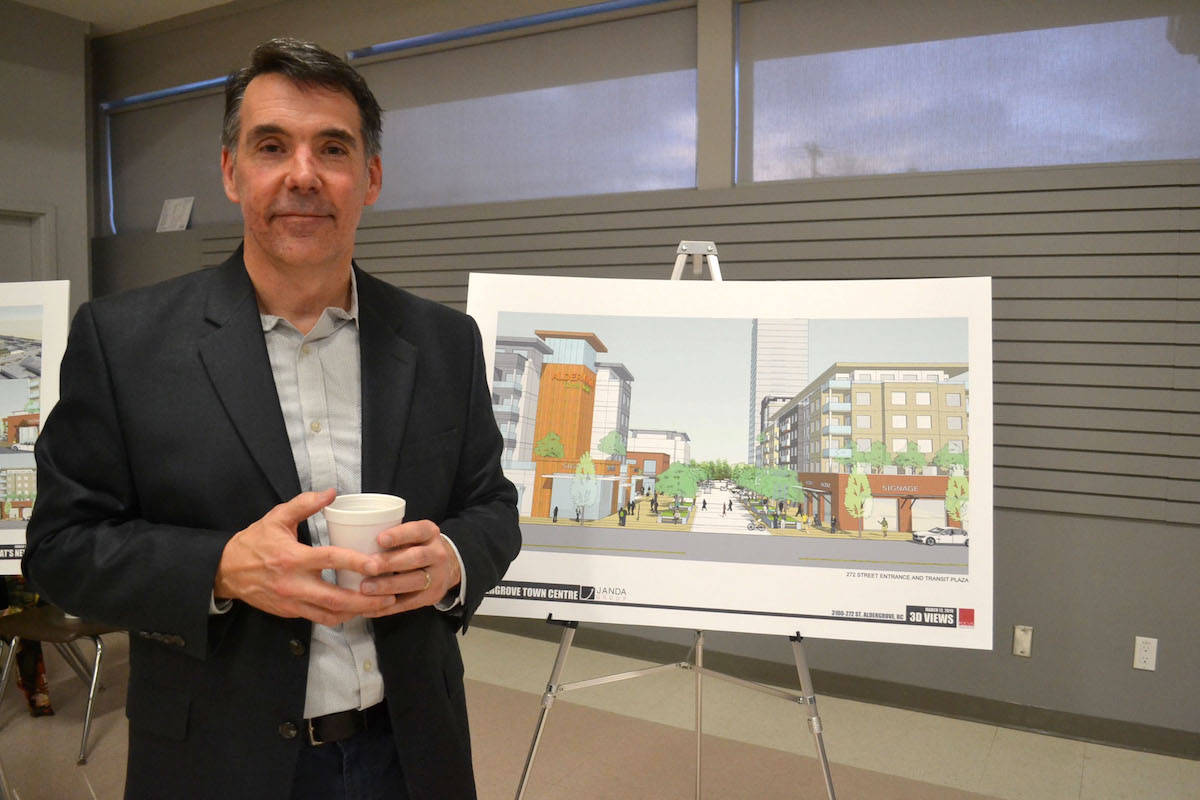