Two decades of experience in the B.C. Legislature is an asset, not a liability, for a party seeking renewal.

That’s the pitch Abbotsford West MLA Mike de Jong is making to BC Liberals as his campaign to lead his party enters its final weeks.

Speaking to in a wide-ranging interivew in January, de Jong pledged to focus on education initiatives and government decentralization. He also disavowed last year’s so-called “clone speech” that followed last year’s election, while predicting that British Columbia’s economy will fall into disrepair under an NDP government.

De Jong was first elected in 1994 and was a fixture of BC Liberal cabinets dating back to 2001. Prior to the BC Liberals ouster, he served for five years as Christy Clark’s Minister of Finance, one of the most-prominent roles in government.

But de Jong, who says the first job of a new leader “is to re-energize our party” is hoping BC Liberals will see that experience to be of value when they cast their votes in early February.

“I know what it takes to rebuild a party after an election loss,” he said. And while he says he’s clearly not everybody’s first choice, de Jong is optimistic that the ranked ballot format will benefit him and allow him to pick up large numbers of second-choice votes.

As for appealing to the broader public, de Jong said his party shouldn’t try to be something they’re not.

But last June’s failed throne speech that seemed to borrow from policies touted by the Green Party and the NDP was a folly, de Jong now says.

Although a press release issued by Abbotsford’s MLAs at the time declared “Throne Speech strikes a balance for Abbotsford and Mission,” de Jong said last week that the speech was Clark’s creation.

“I think that document strayed too far from what I believe we represent as a party,” he said. “Finance ministers write budgets and premiers write throne speeches and that particular throne speech is one that I don’t think could or should guide our party going forward.”

As leader, de Jong said he’d focus on broadening the availability of education, by giving each child $500 a year to go into a Registered Education Savings Plan, and by providing kindergarten to four-year-old children. He also says the province should look at decentralizing ministries and agencies that would be better located outside of Victoria.

He noted that the Ministry of Agriculture, for one, “could function very well headquartered in Abbotsford.”

The News also asked de Jong about comments made by his erstwhile BC Liberal colleague, Darryl Plecas, who was removed from the party after accepting an offer to become Speaker of the legislature.

Plecas had said he was “always in trouble” with Clark and her leadership team for expressing views that differed from the party line. De Jong, who has been House Leader of the BC Liberals for years, said the party has consistently allowed free votes in the legislature and that the only requirement for party MLAs who disagree with policy is for advance notice.

Asked about his relationship with Plecas, de Jong said, cooly, that he has “the respect for the office of speaker that the office requires.” 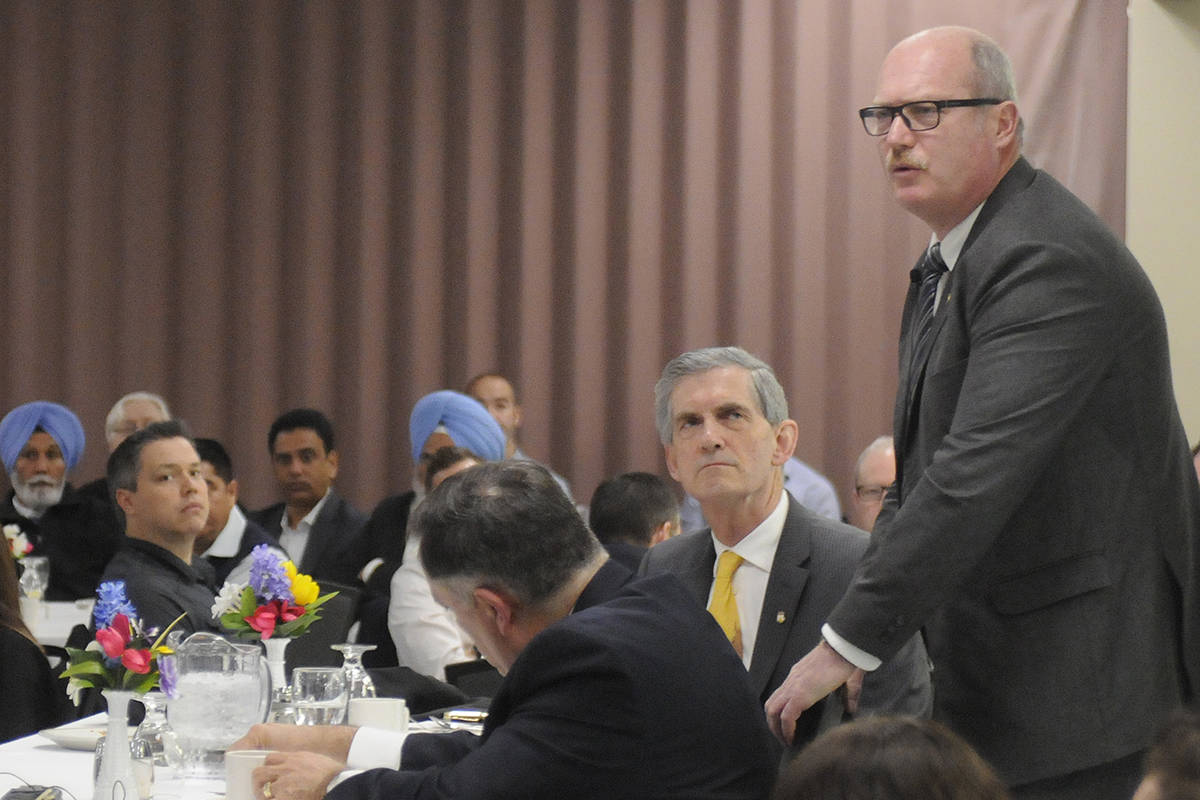 Abbotsford West MLA Mike de Jong is running for the leadership of the BC Liberal Party. Tyler Olsen/Abbotsford News

Body shops not to blame for ICBC’s financial issues: ARA

B.C. senior care improving, but most far below staffing target