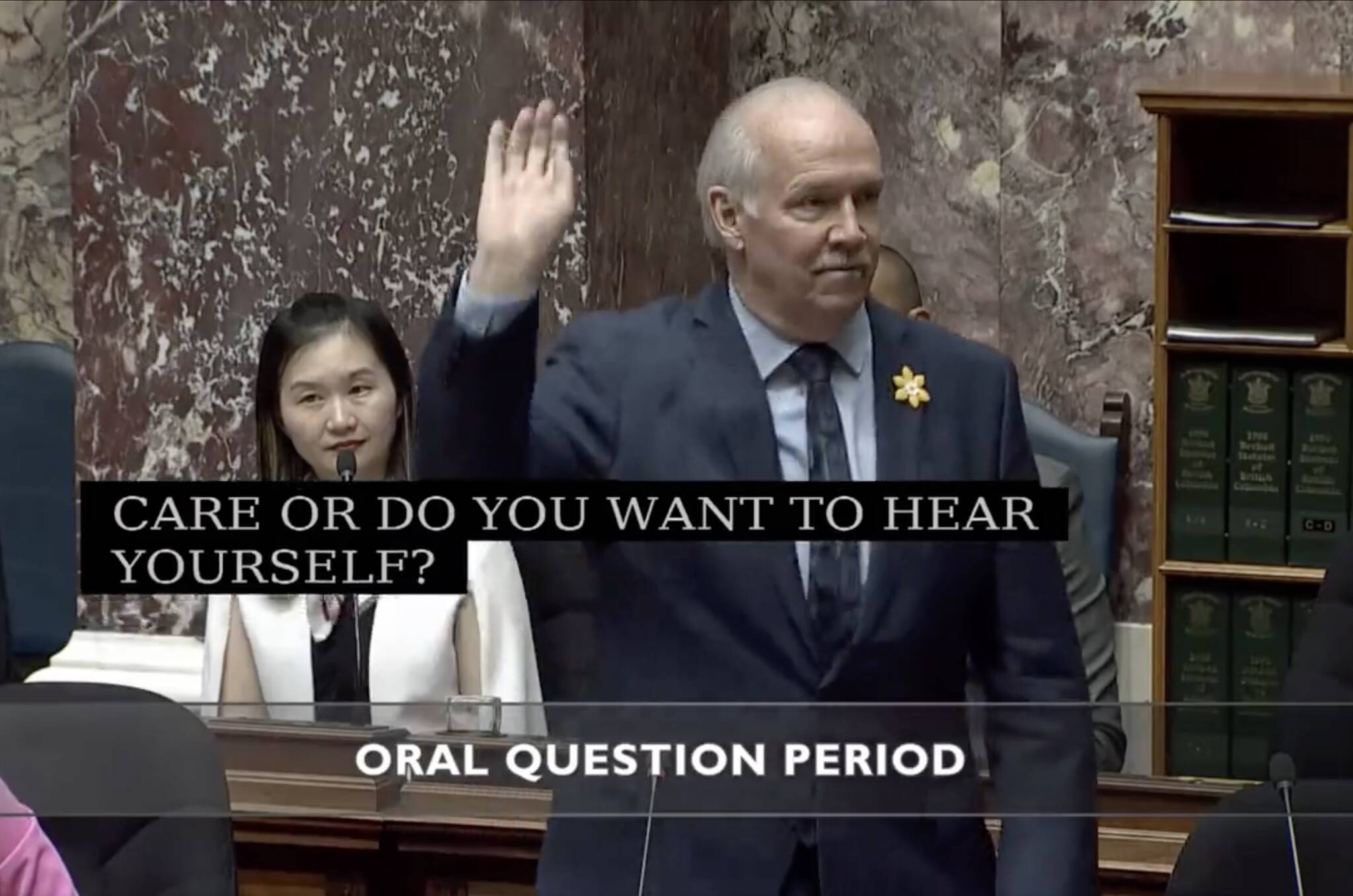 By using the f-word during a heated exchange in the legislature Monday (April 25), Premier John Horgan joins a not-short list of notable politicians who have used unparliamentary language in the chamber.

According to Hansard, the last reference to the f-word dates back to May 28, 2019, when BC Liberal Mike Bernier (Peace River South) accused Nanaimo-North Cowichan MLA Doug Routley of having used it the day before.

Perhaps most famous is the father of current Prime Minister Justin Trudeau, Pierre Elliot Trudeau, whom opposition MPs have accused of mouthing the words “f—- off” in the House of Commons during debate in February 1971. After admitting to media later that he moved his lips, then being asked what he was thinking at the time, Trudeau asked journalists what they might be thinking when they say ‘fuddle, duddle’ or something similar. His son Justin later claimed his father did not say fuddle duddle during debate, but it has since entered the list of words and phrases that the Parliament of Canada deems “unparliamentary.”

The younger Trudeau has also contributed to that glossary, when he called then-federal environment minister Peter Kent, a “piece of s—-.” Trudeau immediately apologized, but a streak of such behaviour nonetheless appears to run through the family.

Profanity is only one category of unparliamentary language and what exactly constitutes it is up to the Speaker of the House. Rulings can be confusing.

The Parliament of Canada prohibits the use of “ass” and “pompous ass” but “jackass” appears multiple times in Hansard.

Ultimately, the rules aim to preserve the dignity of the forum and its members, but the line separating the dignified from its opposite is a thin one. The word “idiot” is unparliamentary but “stupid” is not. You cannot say that “somebody is not telling truth,” but you can accuse that person of being “dishonest” and “not telling the truth” within the limits of parliamentary language. You cannot call somebody an “evil genius” but “stinker” is considered parliamentary.

Horgan, who later apologized for his behaviour, is actually a benefactor of such rules. S. 40 (1) of the Standing Orders in the Legislative Assembly prohibiting disrespectful or offensive language not only protects Her Majesty and members of the Royal Family, the governor-general, prime minister and lieutenant governor, but also the “Chief Executive Officer or Administrator for the time being carrying on the Government of the Province.” In other words, no fuddle duddles against Horgan.

In fact, a closer reading of the standing orders reveals a perhaps exaggerated sense of decorum. S. 40 (2) not only states that “no member shall use offensive words against any Members of this House,” S. 40 (3) even notes that no member “shall be irrelevant in debate,” a line likely news to the many knee-slapping MLAs who have walked the halls of the Legislature since time immemorial fresh off the Friars Club Circuit.

But Horgan can also take some comfort in the fact the standing orders do not yet include any prohibition of dad jokes.

Of course, no mention of unparliamentary language would be complete without a reference to Donald Trump. But technically, he is in the clear. The United States has a presidential, not a parliamentary system, of course.