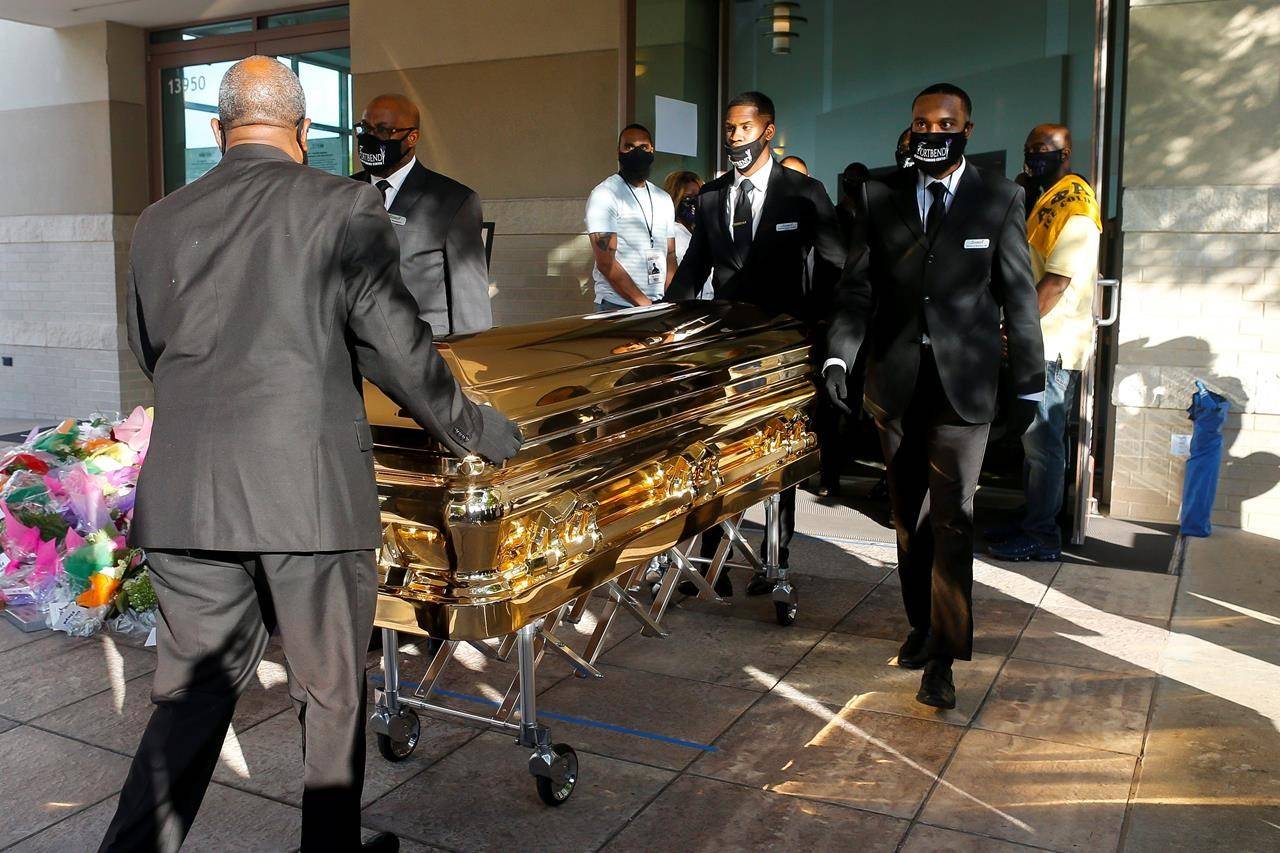 George Floyd’s casket is brought out of Fountain of Praise church following a public visitation Monday, June 8, 2020, in Houston. Floyd died May 25 after being restrained by Minneapolis police officers. (Godofredo A. Vásquez/Houston Chronicle via AP, Pool) 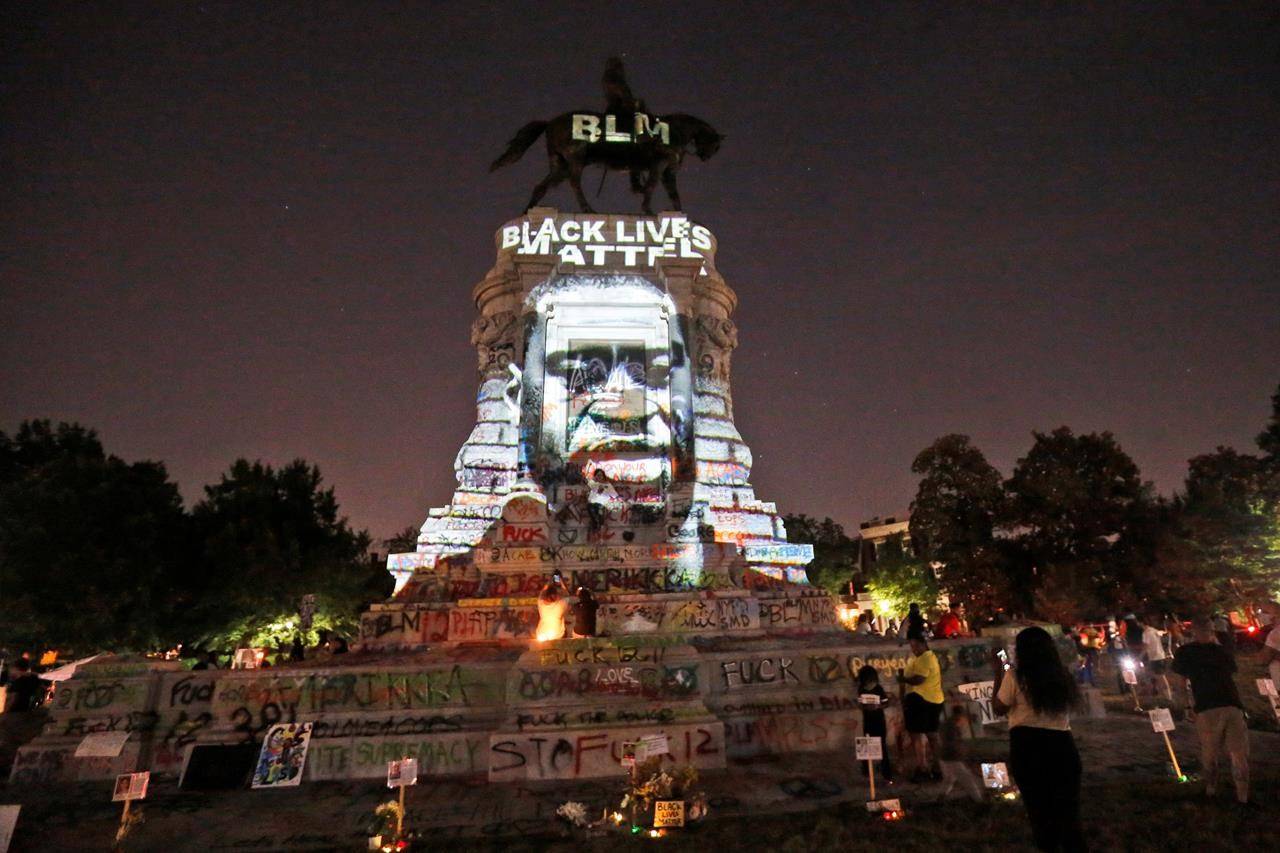 EDS NOTE: OBSCENITY - An image of George Floyd is projected on the base of the statue of Confederate General Robert E. Lee on Monument Avenue, Monday, June 8, 2020, in Richmond, Va. The statue has been the focal point of protester over the death of George Floyd. Virginia Gov. Ralph Northam has ordered the removal of the statue. (AP Photo/Steve Helber) 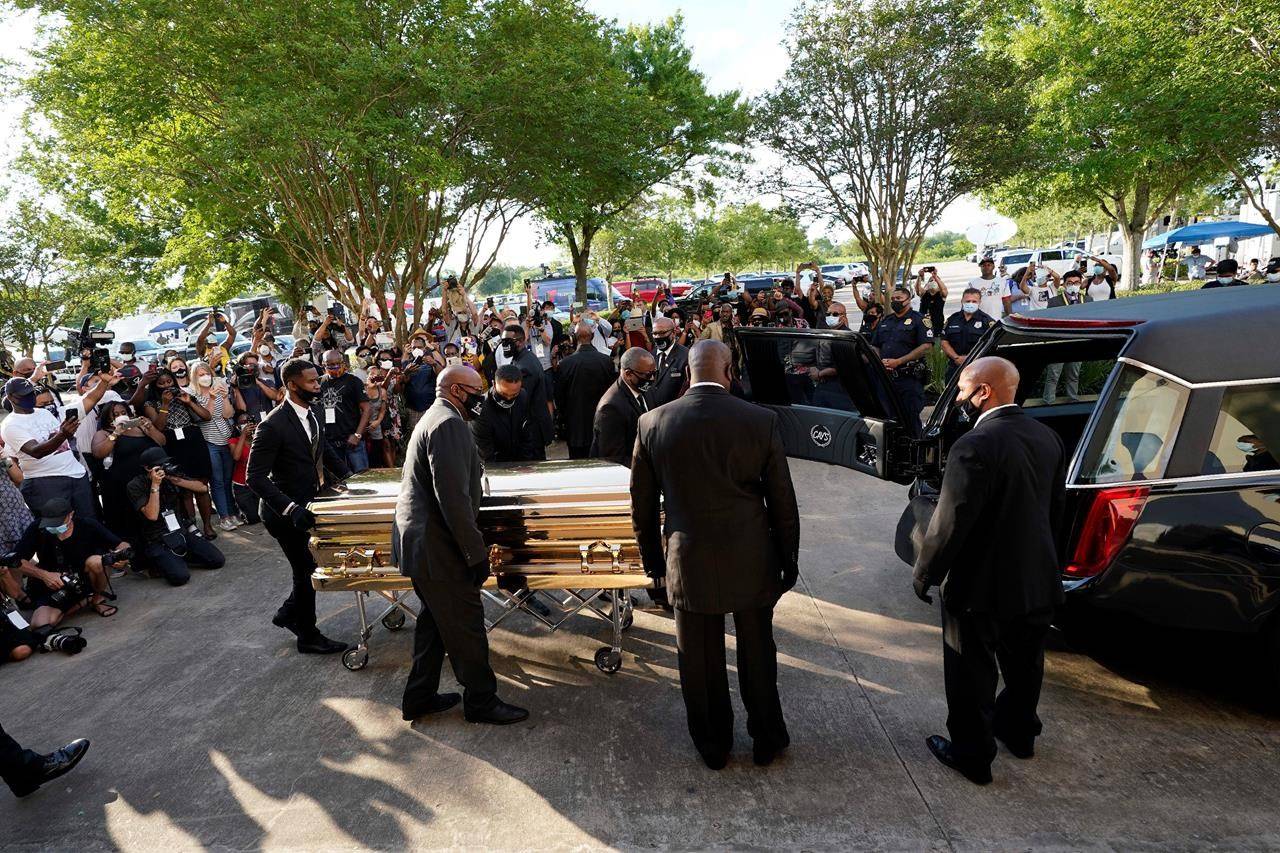 The casket of George Floyd is removed after a public visitation for Floyd at the Fountain of Praise church, Monday, June 8, 2020, in Houston. (AP Photo/David J. Phillip, Pool) 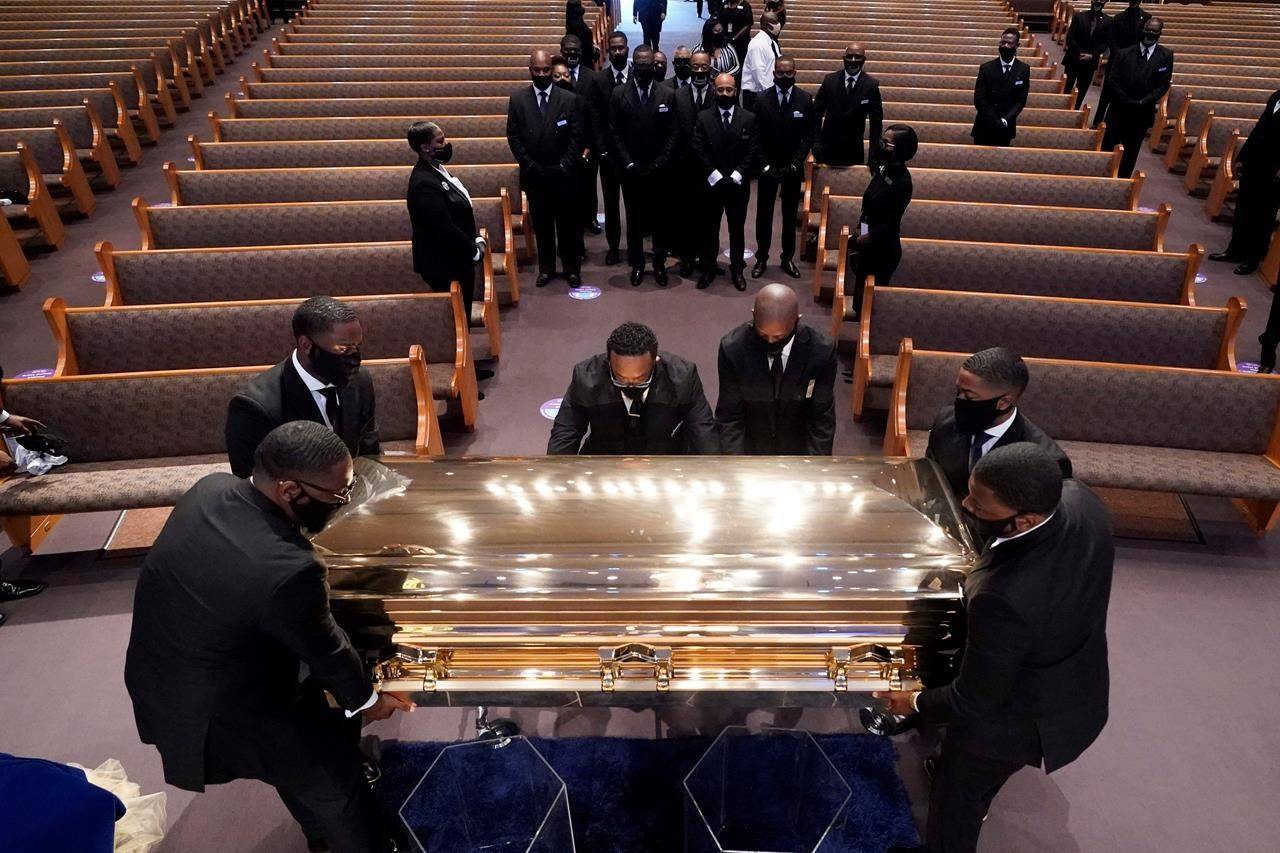 The casket of George Floyd is placed in the chapel during a funeral service for Floyd at the Fountain of Praise church, Tuesday, June 9, 2020, in Houston. (AP Photo/David J. Phillip, Pool) 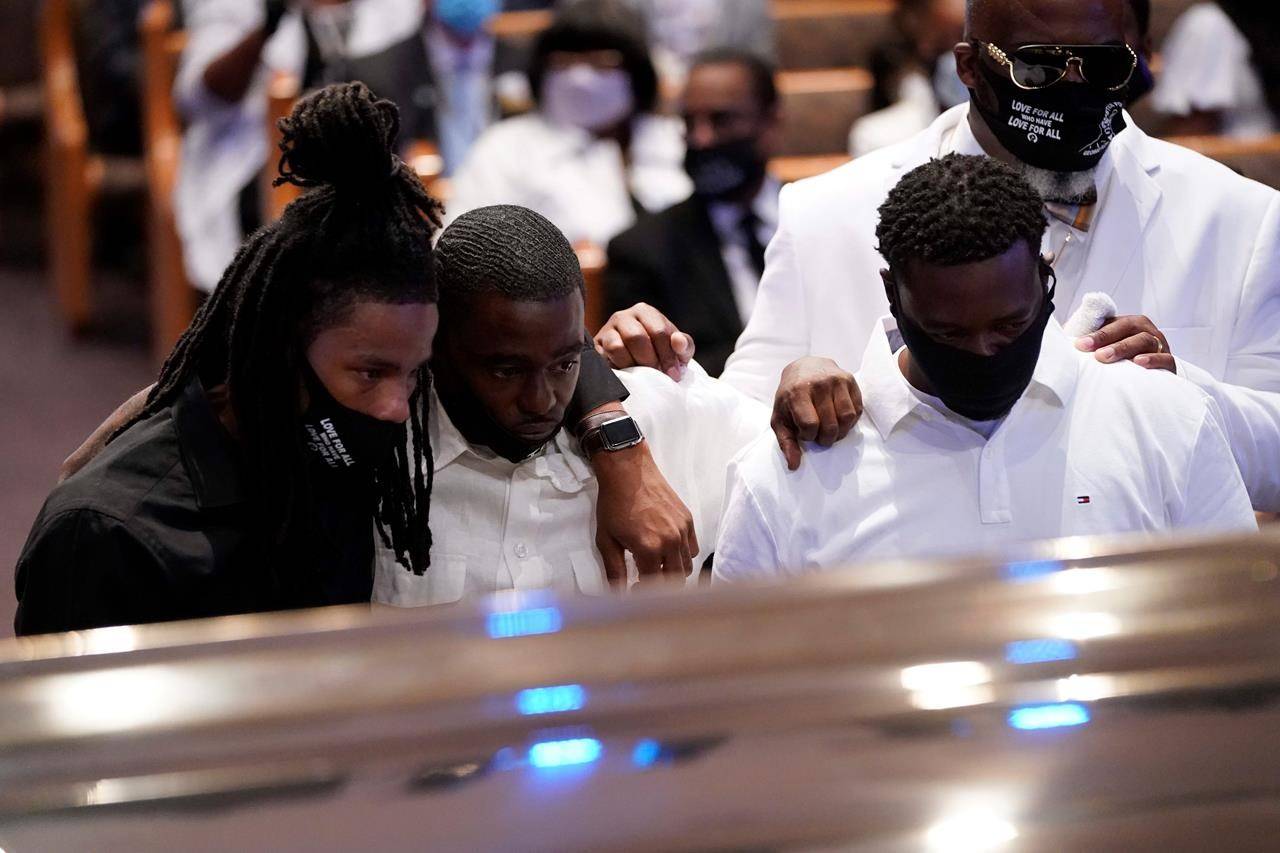 Mourners pause by the casket of George Floyd during a funeral service for Floyd at The Fountain of Praise church Tuesday, June 9, 2020, in Houston. (AP Photo/David J. Phillip, Pool)

George Floyd was lovingly remembered Tuesday as “Big Floyd” — a father and brother, athlete and mentor, and now a force for change — at a funeral for the black man whose death has sparked a global reckoning over police brutality and racial prejudice.

Hundreds of mourners wearing masks against the coronavirus packed a Houston church a little more than two weeks after Floyd was pinned to the pavement by a white Minneapolis police officer who put a knee on his neck for what prosecutors said was 8 minutes and 46 seconds.

Cellphone video of the encounter, including Floyd’s pleas of “I can’t breathe,” ignited protests and scattered violence across the U.S. and around the world, turning the 46-year-old Floyd — a man who in life was little known beyond the public housing project where he was raised in Houston’s Third Ward — into a worldwide symbol of injustice.

“Third Ward, Cuney Homes, that’s where he was born at,” Floyd’s brother, Rodney, told mourners at the Fountain of Praise church. “But everybody is going to remember him around the world. He is going to change the world.”

The funeral capped six days of mourning for Floyd in three cities.

Following the service, Floyd’s body was to be taken by horse-drawn carriage to a cemetery in suburban Pearland, where he was to be laid to rest next to his mother.

“George Floyd was not expendable. This is why we’re here,” Democratic Rep. Al Green of Houston told the crowd. “His crime was that he was born black. That was his only crime. George Floyd deserved the dignity and respect that we accord all people just because they are children of a common God.”

While the service was private, at least 50 people gathered outside to pay their respects. Some held signs with messages including “Black Lives Matter” and “Together because of George Floyd.”

“There’s a real big change going on, and everybody, especially black, right now should be a part of that,” said Kersey Biagase, who travelled more than three hours from Port Barre, Louisiana, with his girlfriend, Brandi Pickney. They wore T-shirts printed with Floyd’s name and “I Can’t Breathe.”

PHOTOS: Hundreds line up for George Floyd’s memorial in Houston

Dozens of Floyd’s family members, most dressed in white, were led into the sanctuary by the Rev. Al Sharpton, the civil rights activist.

The mourners also included rapper Trae tha Truth, Rep. Sheila Jackson Lee, Houston Police Chief Art Acevedo and Houston Mayor Sylvester Turner, who brought the crowd to its feet when he announced he will sign an executive order banning chokeholds in the city.

“No child should have to ask questions that too many black children have had to ask for generations: Why?” former Vice-President Joe Biden, the Democratic presidential candidate, said in a video eulogy played at the service. “Now is the time for racial justice. That is the answer we must give to our children when they ask why.”

Biden made no mention of politics. But other speakers took swipes at President Donald Trump, who has ignored demands to address racial bias and has called on authorities crack down hard on lawlessness.

“The president talks about bringing in the military, but he did not say one word about 8 minutes and 46 seconds of police murder of George Floyd,” Sharpton said. “He challenged China on human rights. But what about the human right of George Floyd?”

The Rev. William Lawson, a contemporary of the Rev. Martin Luther King Jr., said: “Obviously the first thing we have to do is clean out the White House.”

Most of the pews were full, with relatively little space between people.

“So much for social distancing today,” the Rev. Remus Wright told mourners, gently but firmly instructing those attending to wear face fasks.

With the funeral inside the church still underway, hundreds of people lined the route to the cemetery. Many said they had arrived hours ahead to secure a spot.

“We’re out here for a purpose. That purpose is because first of all he’s our brother. Second, we want to see change,” said Marcus Brooks, 47, who set up a tent along the route with other graduates of Jack Yates High School, Floyd’s alma mater. “I don’t want to see any black man, any man, but most definitely not a black man sitting on the ground in the hands of bad police.”

READ MORE: When protesters cry ‘defund the police,’ what does it mean?

The funeral came a day after about 6,000 people attended a public memorial, also in Houston, waiting for hours under a baking sun to pay their respects to Floyd, whose body lay in an open gold-colored casket. Over the past six days, memorials for Floyd were also held in Minneapolis, where he lived in recent years, and Raeford, North Carolina, near where he was born.

The services have drawn the families of other black victims whose names have become part of the debate over race and justice — among them, Eric Garner, Michael Brown, Ahmaud Arbery and Trayvon Martin.

In the past two weeks, amid the furor over Floyd’s death, sweeping and previously unthinkable things have taken place: Confederate statues have been toppled, and many cities are debating overhauling, dismantling or cutting funding for police departments. Authorities in some places have barred police from using chokeholds or are otherwise rethinking policies on the use of force.

Floyd, a bouncer who had lost his job because of the coronavirus outbreak, was seized by police after being accused of passing a counterfeit $20 bill at a convenience store.

Four Minneapolis officers were arrested in his death: Derek Chauvin, 44, was charged with second-degree murder. J. Alexander Kueng, Thomas Lane and Tou Thao were charged with aiding and abetting. All four could get up to 40 years in prison.

Some of the mostly peaceful demonstrations that erupted after Floyd’s death were marked by bursts of arson, assaults, vandalism and smash-and-grab raids on businesses, with more than 10,000 people arrested. But protests in recent days have been overwhelmingly peaceful.