Travelling to every country in the world sounds like a tough goal to achieve.

But Langley’s Jordan D. Marcia is taking on the challenge–and plans to be the first heart transplant recipient to do so.

For now, Marcia is spending the holidays at home before he takes off to the Philippines and Indonesia in the new year and ticks the 15th and 16th countries off his bucket list.

“If you want to do something, you have to go out and do it,” said Marcia, who hopes to accomplish his goal of hitting all 195 countries in the world within 5 or 6 years.

Marcia was born with a rare congenital heart disease, and when he was 3-years-old, received a heart transplant at Toronto’s Sick Kids hospital from a family who had lost their son to a car accident.

Now 27, Marcia has made it his goal to travel to every country, simply because “life is short.”

According to Marcia, a heart transplant usually lasts the recipient about 10 years, but his has been beating for 22 years.

His expected lifespan is 40.

Marcia started travelling in 2014, and said he’s been interested in travelling ever since he was a kid and went on his first family vacation to Mexico.

“It sparked this wanderlust of wanting to see different countries and their cultures,” explained Marcia.

As a transplant recipient, Marcia hopes his journey will inspire others with medical conditions or transplants to “live their life to the fullest.”

I figure this is the biggest thing I could do and if i succeed, then no one can say ‘I can’t do something.’ It makes them [transplant recipients] feel like they can go out and live their life to the fullest, because we’re all going to die.”

Since all his trips are done alone, Marcia said he’s learned a lot about himself.

Marcia has never met his transplant family, but hopes he will someday, or that they will see his travel videos and “put the pieces together themselves.”

“That’d be amazing for them to know their son’s sacrifice led to me being able to achieve all my goals and help people. I’d love to meet them if I could.”

Marcia’s motto of “life is short,” is something that also runs in his immediate family.

“My dad said, ‘go for it, whatever makes you happy.’ We all have the same concept that life is short and you should do what you want to do,” said Jordan of his family.

And Marcia has a deep appreciation for organ donors, and is signed up to be one himself. Since he takes anti-rejection medicine for his heart, Marcia will only be able to donate his eyes once he passes, but said the rest of his body is signed up for science research.

“My entire family is organ donors. I think everybody should be an organ donor. It helps people live life, and get a second chance. It’s hard to put into words,” said Marcia.

When Marcia is not travelling, he receives care at St. Paul’s hospital in Vancouver from Dr. Andy Ignaszewski.

Marcia said his doctor was also supportive of his travel goals.

During the holiday season, St. Paul’s lights up the building for their annual Lights of Hope giving campaign which is a fundraiser for medical equipment and patient programs at their facilities.

The hospital is lit up nightly until Jan. 7 at St. Paul’s hospital at 1081 Burrard St. in Vancouver. 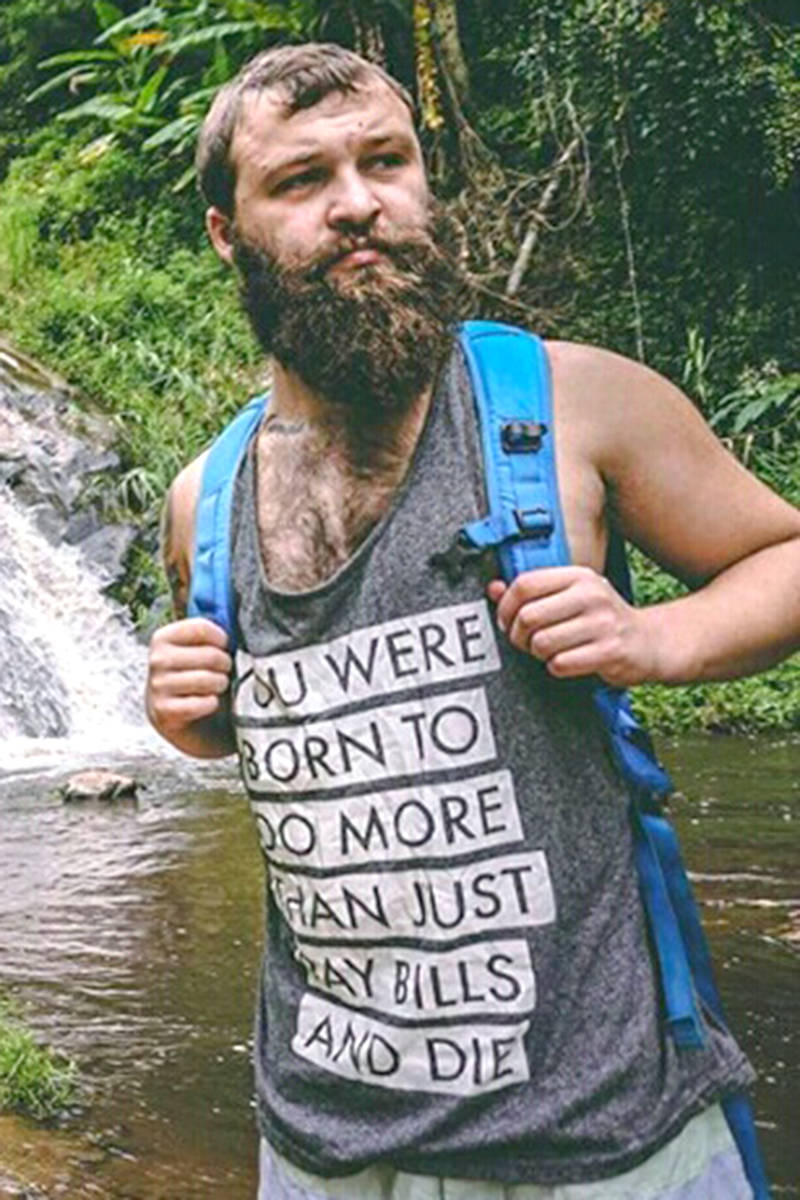 Marcia’s shirt reads “You were born to do more than just pay bills and die.” Courtesy Jordan D. Marcia