Although the hard work is being done now, it’s the future Fort Langley residents and visitors in 100 years who will benefit the most from ‘The Memory Grove.’

The $40,000 community project will see 30 new heritage trees planted in the Salmon River Natural Area, next to Bedford Landing, as a continuation of a tree planting legacy started nearly a century ago.

In 1921, Dr. Benjamin Marr, who was Langley’s first resident doctor, planted a number of trees in front of the Marr House and the Fort Langley Cemetery on Glover Road. He planted 17 Horse Chestnuts on the west side, and seven Horse Chestnuts, alternated with Western Red Cedars, on the east side. In the cemetery, more Western Red Cedars were planted to form the backdrop for the cenotaph, along with Rhododendrons.

“We thought, wow, wouldn’t it be nice to leave a legacy in honour of people like Dr. Marr, who did these kinds of things many, many years ago,” said Kurt Alberts, one of the organizers of the project.

“It’s going to be 100 years, but people are going to say, ‘what an awesome grove of trees’ in the same way that now, people take it for granted that when you come into Fort Langley, you drive under this wonderful canopy that crosses Glover Road, formed by the Horse Chestnuts.”

The inspiration for the project goes back to a meeting Alberts had with Dr. Marr’s son, Bill Marr, a number of years ago.

Bill, who passed away at the age of 100 in February, was only four-years-old when his father planted the heritage trees.

“Those trees are probably 150 feet, even more than that now,” Alberts said.

“We’re respecting the history of Fort Langley and recognizing it takes people like Dr. Marr to have a vision for these types of things, and I think it leaves everyone with a good feeling when we can point to a legacy that’s been left in the community.”

An unofficial arbour committee formed, and with the help of local developer Van der Zalm + Associates, which has donated staff and time, the group contacted the Township and drew up plans.

“It fit right in with the Township’s own thinking about that area that we had identified,” Alberts said. “Years ago it used to be a corn field or a hay field, and as part of the Bedford Landing development, that area was donated to the community to be kept as a natural, conversation area. It fits in perfectly. There hasn’t been that much tree planting that has gone on over the years, since Bedford Landing was developed in that section.”

The Memory Grove also runs along a network of community trails that connect to the Trans Canada Trail, making the location even more ideal.

In total, there will be three Horse Chestnuts, 14 red Horse Chestnuts, 11 Grand Firs and two Western Red Cedars planted. Each tree will be sponsored by individuals and businesses in the community, and all have been spoken for but two.

The two remaining trees — one Horse Chestnut and one Western Red Cedar — will be auctioned off live at The Memory Grove Gala on Thursday, April 19.

The event, beginning at 7 p.m. at the Fort Langley Community Hall, is open to the public to attend and will help raise funds for the project. There will be live music from Karla Sax, canapes, a cash bar and door prizes, along with the auction for the two trees and a sunset cruise for two around Fort Langley aboard the “Brenda A” york boat.

Tickets are $50. To purchase, send a direct message to The Memory Grove on Facebook or email info@bcgallery.ca. More information on the project can be found at thememorygrove.com. 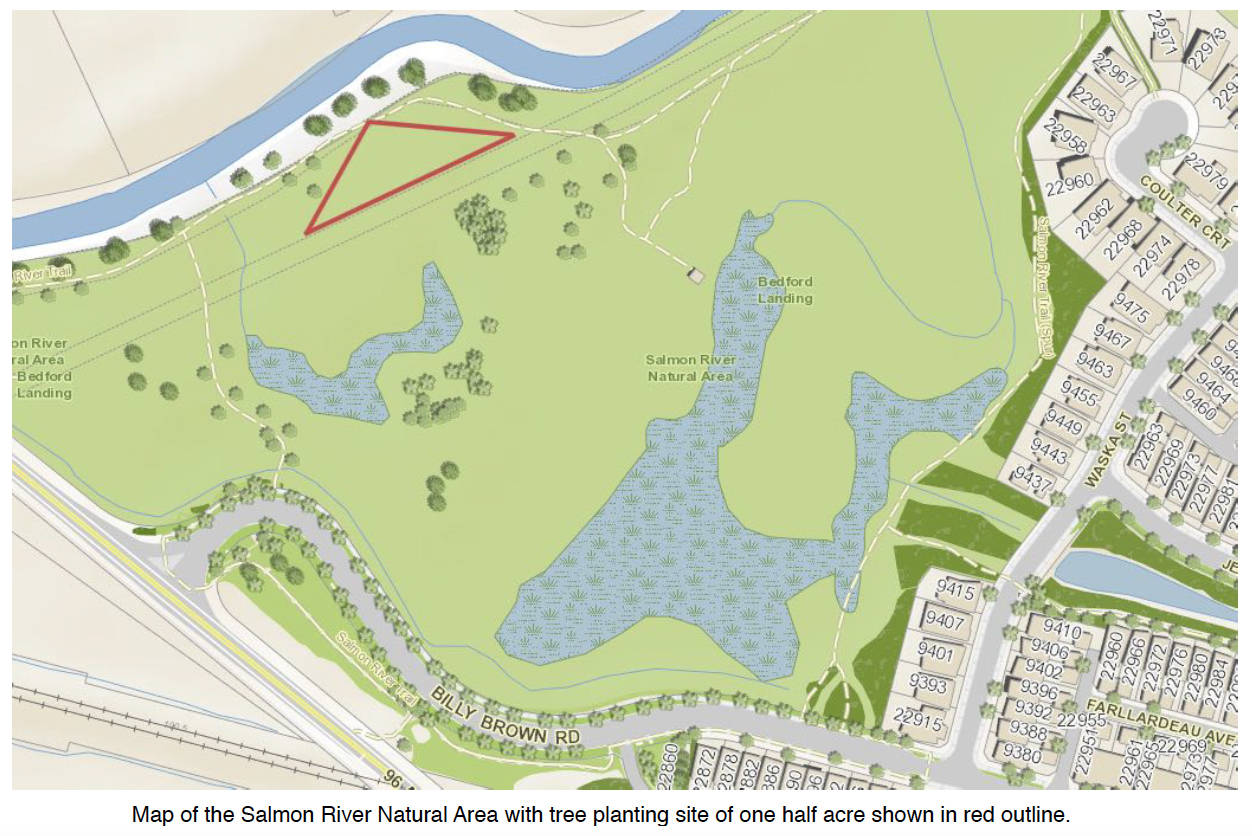 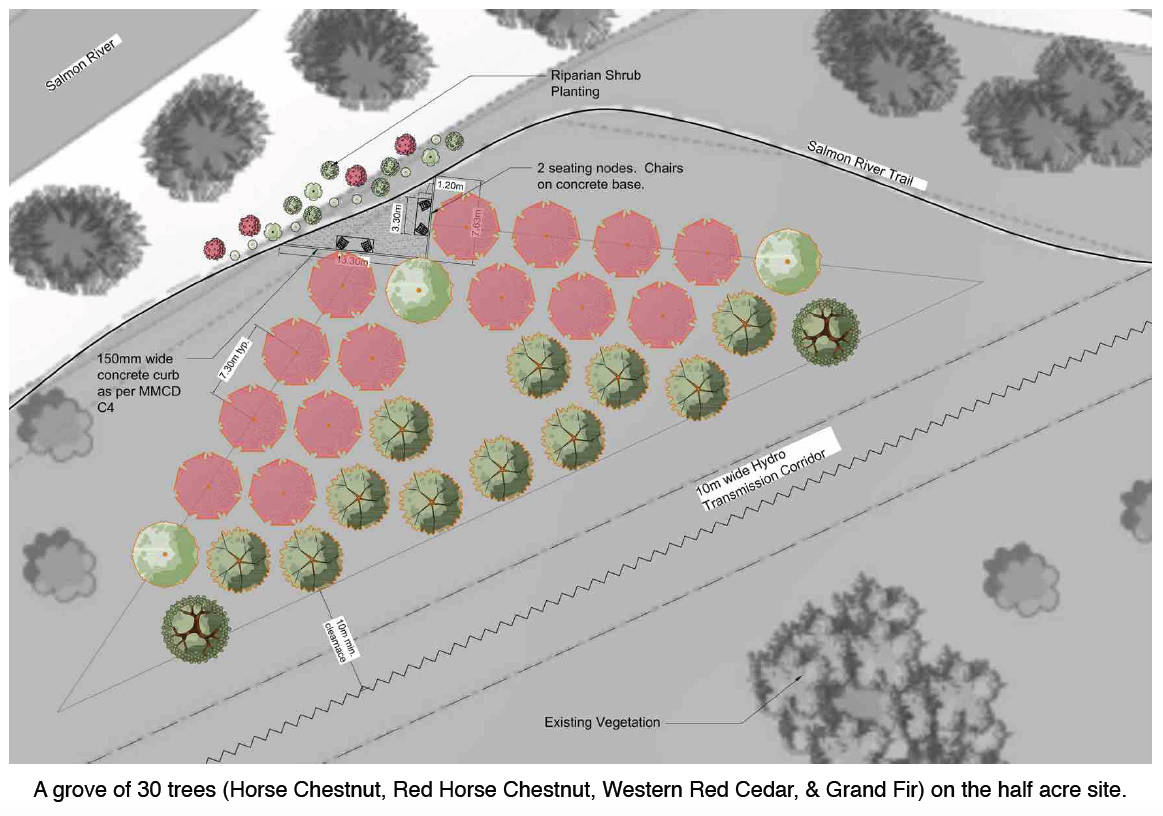 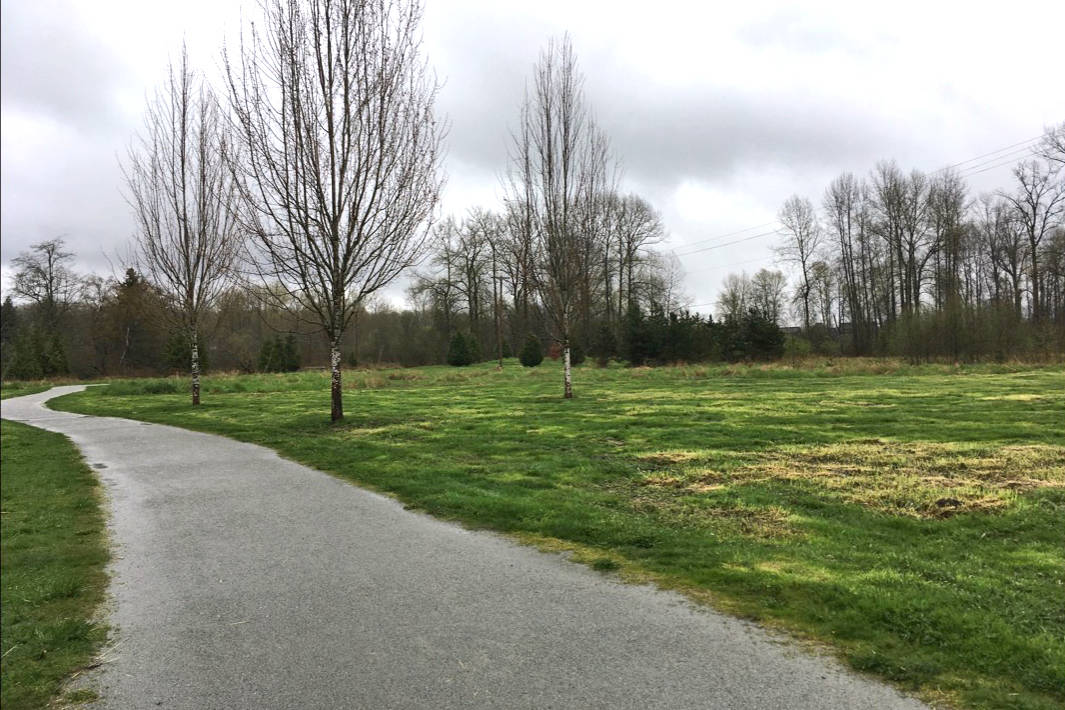 The Memory Grove will be planted in the Salmon River Natural Area, next to Bedford Landing. Photo by Melody Ahmed/ Special to the Langley Times

B.C. ready to fight back against Alberta fuel restrictions