Home sales continued declining across the Fraser Valley as price drops also picked up speed in Langley and around the region.

According to monthly statistics released by the Fraser Valley Real Estate Board (FVREB) 59 single-family homes changed hands in Langley in July.

Townhouse and condo sales were also down, although their declines were less steep. There were 61 townhouses sold in Langley in July, a 43 per cent drop year-over-year, and down 32.2 per cent from the 90 that sold in June.

For condos, 91 sold in July, down 28.3 per cent from the July last year, and exactly even with the number of sales from June.

Prices were also dropping, a trend that remains most notable with average and median prices.

The FVREB’s benchmark price for a single family home in Langley, which the board says is the average price for a typical home, was $1.72 million, down 3.9 per cent from last month, but still up 16.2 per cent from a year ago.

That difference indicates that more expensive homes are not selling as fast as smaller or less expensive ones.

He noted the peak was just three months ago in Langley.

Meanwhile, the number of houses and townhouses for sale remains low compared to recent years, but is much higher than last year, when anything with a “for sale” sign was the subject of a bidding war.

In July, there were 398 active listings for detached houses in Langley, up 123.6 per cent from a year earlier, and unchanged from June.

Corsie said there is quite a bit of housing inventory for buyers to choose from, but that makes it a much more difficult market for sellers. Where once there were 20 potential buyers, now there are two, he said.

He expects prices to stabilize relatively soon, as the cost of renting and buying are getting closer together again. When that happens, renters look to purchase something.

The summer is often a quiet period in the real estate market anyway, Corsie said.

The big question is whether or not there is a fall market in September and October.

“Do people come back?” he said.

That will determine much of the rest of the year in real estate.

In general, property prices across the region have been rising steadily, and in some periods very rapidly, since about 2003.

In the 1990s, the average price for a detached home in the Fraser Valley hovered at around $250,000 and remained flat for most of the decade.

Prices began to rise in the early 2000s. With the exception of two significant dips, in the 2008 recession and again when there was a minor price correction in 2018, prices have only gone higher and higher.

The graph of price increases turned almost vertical in mid-2020 during the pandemic. Average residential prices in the region shot up from around $1.1 million to $1.9 million.

When the Bank of Canada began to hike interest rates earlier this year from record lows, the average price began to plummet. As of this month, it’s down to about $1.5 million, but that’s still almost three times where it was in 2010.

The price of a detached home in Langley has gone up 206 per cent in the past 10 years. 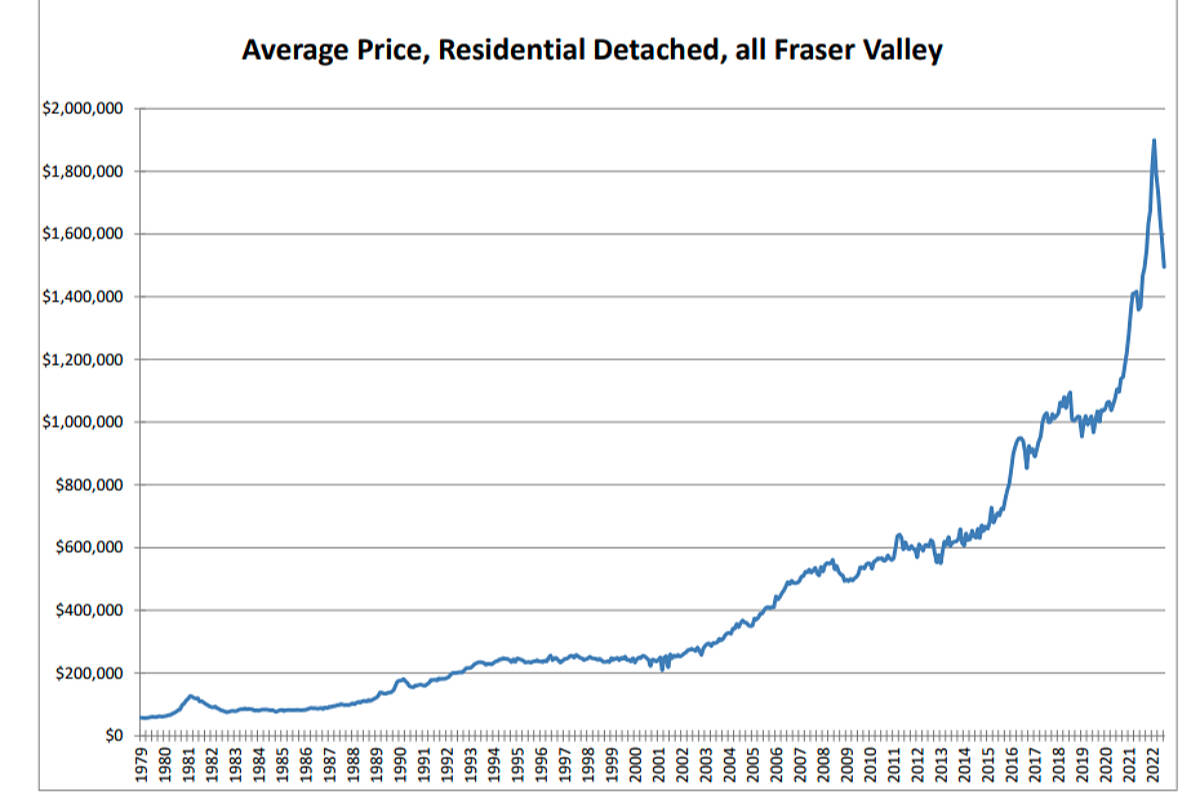 Single family home prices in the Fraser Valley over the past 20 years have gone up sharply, but are now in steep decline from a peak of almost $2 million just months ago. (Fraser Valley Real Estate Board)