Sarah Champoux of Aldergrove was driving her truck and horse trailer – with five horses on board – Monday afternoon (Sept. 2) near Sicamous when a semi-trailer pulled out of a gas station and turned left onto the highway in front of her.

“I honestly thought I was going to die as my truck went under his trailer,” Champoux recounted in a post to her Facebook page.

“It all happened so fast.”

Pictures posted online show the force of the collision crushed the front end of the heavy-duty pickup used by her company, WPS Transport Ltd., to move horses.

Her truck ended up partially under the semi-trailer.

“My trailer completely detached from the hitch and only the chains stopped the trailer from coming in the back of the truck,” Champoux explained.

Although her chest was pinned, she was able to squeeze out and escape through the passenger side.

By then, Champoux reported, several people had come to her aid and helped her get the horses, two of which had fallen down, out of the trailer.

“People were amazing and at least a dozen were helping, including a vet tech, cowboy, and other horse people,” Champoux recounted.

“Everyone stepped into action and helped me and the horses.”

Amazingly, neither Champoux nor the horses appeared to have suffered serious injuries.

“The police and paramedics can’t believe I [walked] away with a few small cuts, mainly from running in the glass with no shoes on, and a sore back,” Champoux said.

“I am] incredibly stiff and sore but alive.”

She described the horses as “shaken,” but with no visible injuries.

A local person took the horses to their barn, she added, where they waited for a trailer to come pick them up and and transport them the rest of the way to Langley.

She was admitted to hospital in Salmon Arm as a precaution, then discharged Tuesday.

“I can’t thank everyone enough for all the help,” her post stated. “I really feel incredibly thankful.”

An RCMP report said the collision took place in front of the Husky truck stop on Highway 1.

“The driver of the pickup truck escaped serious injury despite the fact her truck was lodged under the transport trailer with heavy damage to the truck cab,” said RCMP Sgt. Murray McNeil.

The driver of the semi was issued a ticket for failing to yield on a left turn.

The collision closed the highway for more than two hours between 2 and 4:30 p.m as crews worked to clear the wrecked vehicles.

The closure, coupled with heavy long-weekend traffic, created what police described as a “significant backup”on the highway.

The website for WPS Transport Ltd states the Aldergrove-based business has more than 40 combined years of hauling experience, describing the operators as “horse people first and foremost.”

Sarah Champoux’s daughter, Megan, is an elite athlete who has won awards in both equestrian and track and field events. 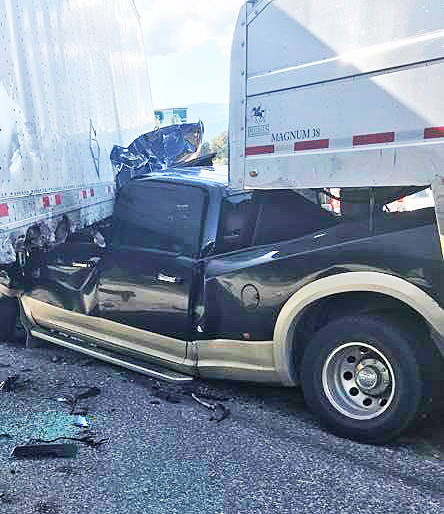 When this semi and her smaller truck collided, ‘I honestly thought I was going to die’ Aldergrove resident Sarah Champoux said. (Photo by Sarah Champoux/Special to Langley Advance Times)