Langley – Aldergrove Conservative MP Tako van Popta posted a photo of himself with three participants in the ‘Freedom Convoy’ in Ottawa on Monday, Jan. 31.

They were standing in front of a crane truck with a Canadian flag.

“It was good to meet with Travis Keobke, Tyler Keobke and John Ford in downtown Ottawa,” van Popta said.

“These brothers and John drove all the way from Langley as part of the Freedom Convoy. Thank you for fighting for freedom; thank you to the organizers for the peaceful demonstrations.”

Van Popta said the meeting with the brothers, who are from Aldergrove, happened after they bumped into an acquaintance of his in Ottawa, who then got in touch with him.

“They were my constituents,” van Popta told the Langley Advance Times.

“It was a pleasure to meet you today in Ottawa, Tako van Popta,” Keobke said.

“Thank you for being our voice in parliament. We have completed the first leg of this journey for freedom, and are honoured to pass the baton to you today on Wellington St.”

Van Popta said the vast majority of protesters in Ottawa have been well-behaved, keeping the streets clean by tidying up after themselves.

“I haven’t seen any trouble.”

As for reported disrespectful incidents, where a protester was caught on video climbing on top of the Tomb of the Unknown Soldier, and where a statue of Terry Fox was adorned with an anti-mandate poster and upside-down Canadian flag, Van Popta said they do not represent the vast majority of protesters, in his opinion.

“You get a few thousand people out there, you’re going have some bad apples,” van Popta said.

He described the convoy protest as “just ordinary Canadians who want to work for a living.” 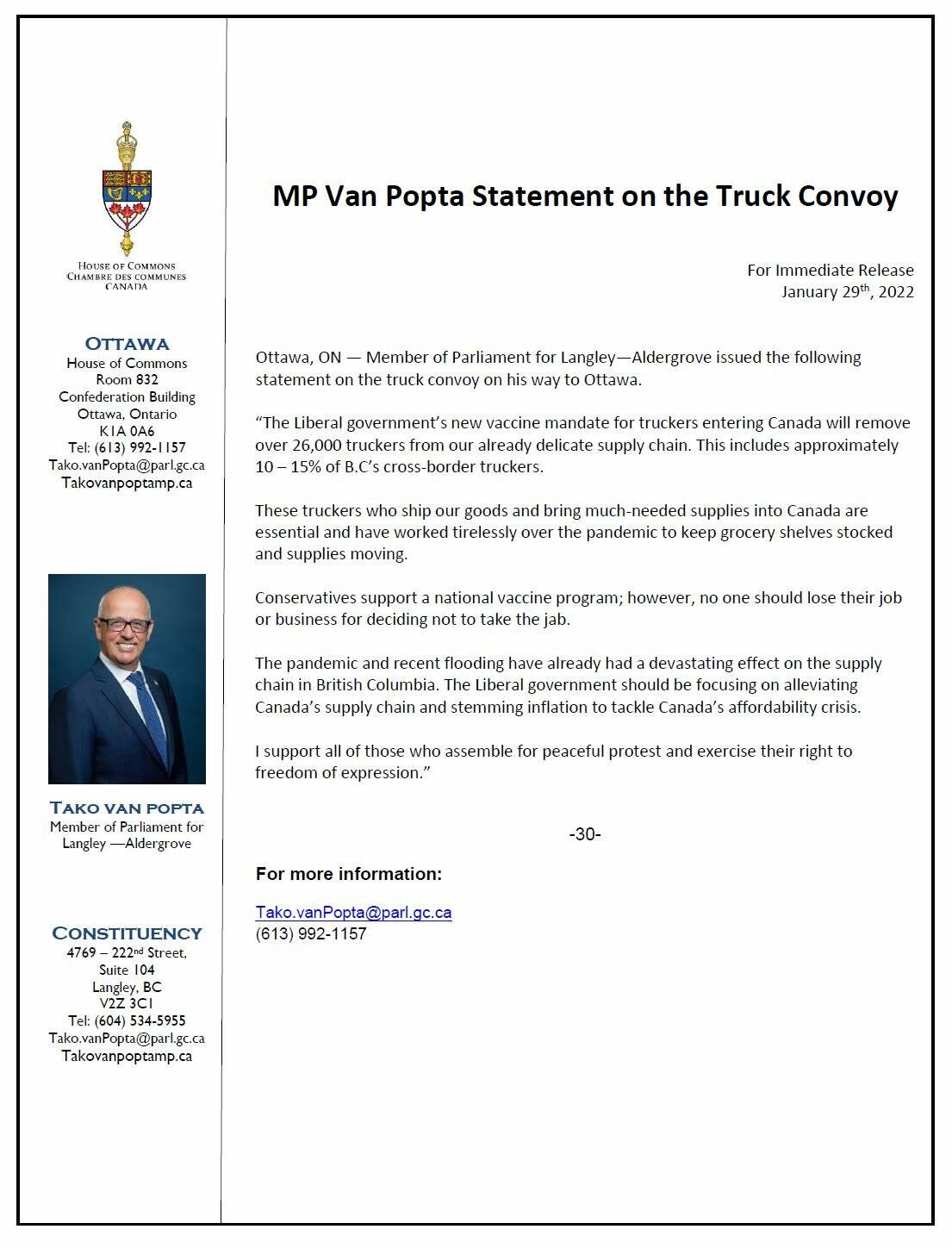 While the MP said Conservatives support a national vaccine program, “no one should lose their job or business for deciding not to take the jab.”

Van Popta concluded by saying “I support all of those who assemble for peaceful protest and exercise their right to freedom of expression.”

Dozens of social media comments praised the MP for being “bold and courageous,” and “supporting freedom,” saying it was “nice to see you on the ground talking to the truckers,” with one calling for end to COVID vaccinations, describing them as “an ineffective mess,” while another said the Conservative party needs to “break the state run media of the Liberals.”

Erin O’Toole voted out as Conservative leader by MPs

B.C. patients can now get a prescription for a Parks Canada Discovery Pass