Langley officials heard a little bit more about the locations and designs of Langley-area SkyTrain stations during a tour with the project’s director and two provincial cabinet ministers on Wednesday.

Local politicians, including Langley area MLAs, most of Langley City council, and Minister of Transportation Rob Fleming and Minister of Infrastructure Bowinn Ma gathered at the White Spot near the Willowbrook Shopping Centre for the brief tour.

The White Spot, on Fraser Highway, will be the approximate site of the first SkyTrain station within Langley.

While TransLink has typically released simplified maps that showed the line running straight down Fraser Highway, a 2019 public engagement package showed a slightly different route, which was confirmed by Jennifer MacLean, the executive project director of the Surrey-Langley SkyTrain extension project.

Maclean said the SkyTrain line will enter Langley on the north side of Fraser Highway.

After the station at the Willowbrook Mall, it begins to veer north. A preliminary map shows the route runs behind the gas station on the northeast corner of the Langley Bypass and Fraser Highway, running down what is now an alley between some commercial buildings fronting Fraser and the Bed Bath & Beyond to the north, veering north again around Production Way.

At 200th Street, the line begins following Industrial Avenue, and the 203rd Street station and turnaround for the trains is to be on the east side of 203rd, in an area currently vacant of buildings.

MacLean said the station at Willowbrook will be one of the smaller types of stations, with side platforms.

As a busy terminus station, the 203rd Street station will have a center platform, more like King George Station, and there will be a bus exchange and above-ground parking.

When completed, the line is expected to have a major impact on development in Langley City, one the council has been preparing for for some time.

The City has been working towards a new Official Community Plan, with the downtown near SkyTrain devoted to “specialty and pedestrian-oriented retail, restaurants and café uses on the ground floor of buildings” while encouraging office and other commercial uses and services in the second storey and above.

READ ALSO: Plans to prepare Langley City for SkyTrain to be presented to virtual public hearing

More residential space is planned at greater heights than most of the current housing stock.

Fleming said that the province has been working closely with Surrey, Langley Township, and Langley City on managing the impacts of the arrival of SkyTrain.

He acknowledged that existing residents could be displaced as older rental units are demolished or renovated to make way for new projects.

BC Housing is working on ensuring there are new units available, within walking distance of SkyTrain, and to help with displacement during construction.

Fleming emphasized the opportunity to create transit-oriented development in the City’s downtown.

“You don’t get too many opportunities like this to do it right,” Fleming said.

He said the SkyTrain will facilitate jobs and allow for more affordability, as well as lowering greenhouse gas emissions by getting people out of their cars and onto transit.

Part of the project will also be to connect the SkyTrain station hubs with “active transport” networks such as bike lanes and pedestrian routes. The City has been expanding its bike lane network in recent years, and the downtown is largely flat and easily accessible for cyclists.

The SkyTrain is currently expected to start running to Langley in 2028.

MacLean noted that some specific details, including where a SkyTrain servicing yard might be located in Langley, haven’t been finalized yet. 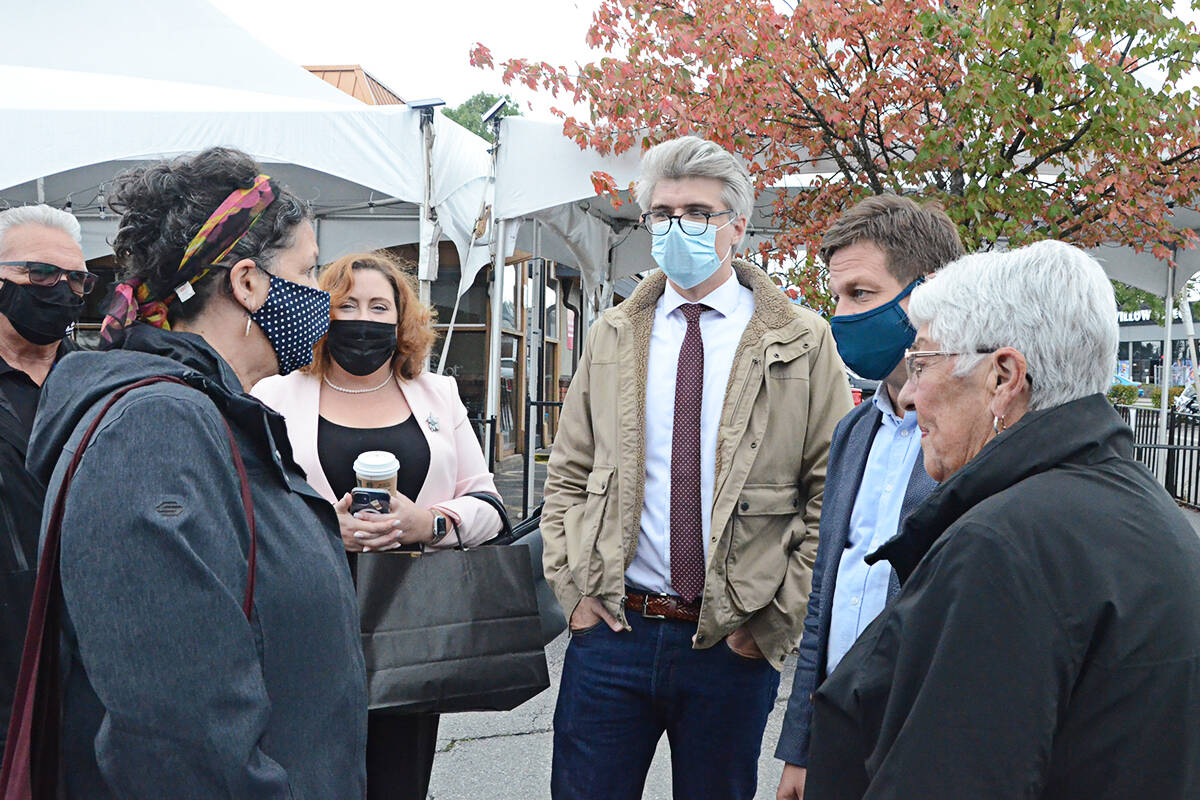 Langley City councillors and MLAs spoke to Transportation Minister Rob Fleming (second from the left) at the site of a future SkyTrain station on Wednesday. (Matthew Claxton/Langley Advance Times)

Winter tires should be installed by next Friday, October 1