Mounties lined the Aldergrove legion parking lot Thursday afternoon. It wasn’t to track down the suspect of a crime, nor to respond to a call for help.

It was to serve up some local kindness with a drive-by barbecue, collecting donations for the Aldergrove Food Bank and handing out a quick bite to eat in return.

“It’s not very often we get to stop and give,” explained Langley RCMP Cpl. Craig Van Herk, who turned 51 years old the same day.

Van Herk told Aldergrove Star the event made for “the best birthday ever,” with more than 108 people driving by from 11 a.m. until 1 p.m. – a span of three hours.

The afternoon was full of surprises for the Mounties.

While the group was setting up earlier that morning, four squad cars drove through the parking lot at 26607 Fraser Hwy., decorated in celebratory signs.

“They all flashed their lights for me while I was conveniently asked to work on something out of sight,” Van Herk remarked.

“Coming to work and have my colleagues put together a birthday parade – it’s like a second family.”

RELATED: Langley Mounties ask the public to drive by, donate, and celebrate Aldergrove

At one point, seven-year-old Tatiana Garbet handed the police officers the result of several months of fundraising for the Aldergrove community food bank.

Since Christmas, she was able to raise $100 from friends and family members for other families struggling to cover the cost of groceries.

Aldergrove Food Bank assistant manager Tannis Percival presented the young child with a pink tulip, thanking her for her generosity.

Hundreds of donations, thousands of dollars

Percival and Langley Food Bank director, Jim Calamunce, were on site to receive the more than 700 litres of food, in 13 bins, and more than $2,000 in cash donated by Aldergrove residents.

Many attendees had bags and boxes full of groceries to give, others had handfuls of cash. When toilet paper was donated in bulk, food bank volunteers and Mounties cheered.

“Because of the times, a hot dog with everything on it means with packets of ketchup and mustard,” Cpl. Damien Moe explained to one cheery motorist.

Couple Marion and Gordon Rawlings, from Pioneer Park, made an outing out of the event.

They drove through in style, donating cash in a class British convertible with an attached Canadian flag that whipped in the wind.

“We came to get hot dogs,” Marion said to the Aldergrove Star.

Aldergrove legion president Doug Hadley was working behind the scenes, with Ladies Auxiliary president Barb Burkett and vice-president Karen Grabinsky, to grill up and package hot dogs for drivers.

FreshCo in Aldergrove donated wieners, buns, and canned drinks for people that stopped by.

It was a collaborative community effort to provide Aldergrove residents and friends of the food bank, legion, and RCMP, a worthwhile reason to leave their house amid the pandemic.

“Everyone is so happy,” Van Herk said aloud, “The sense of community is over the top, I can’t wait to spend my next birthday here.” 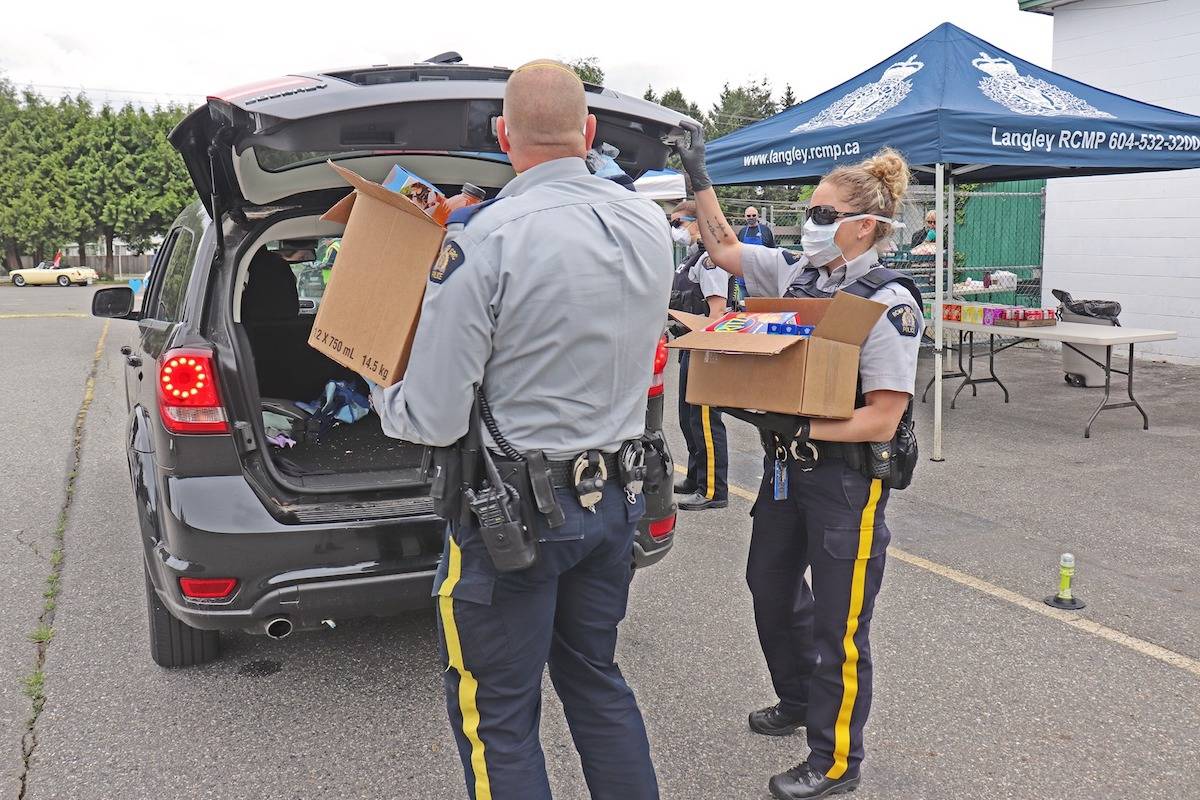