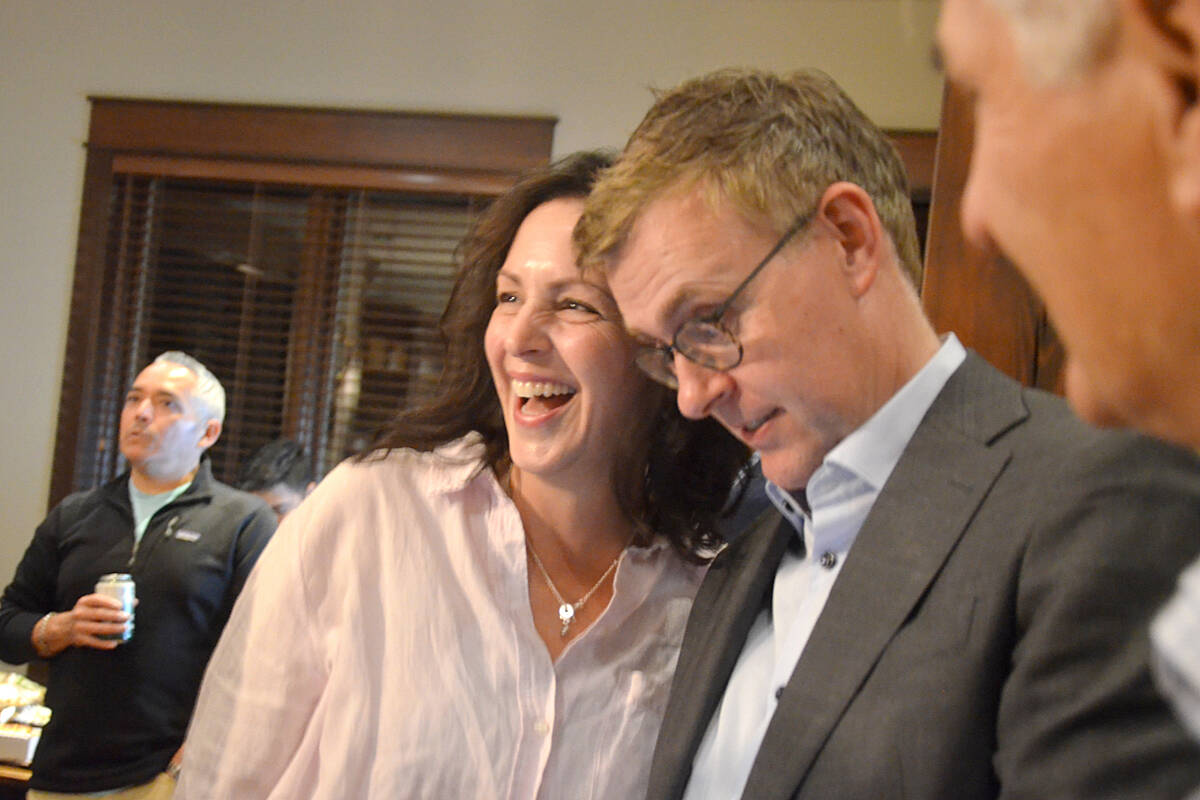 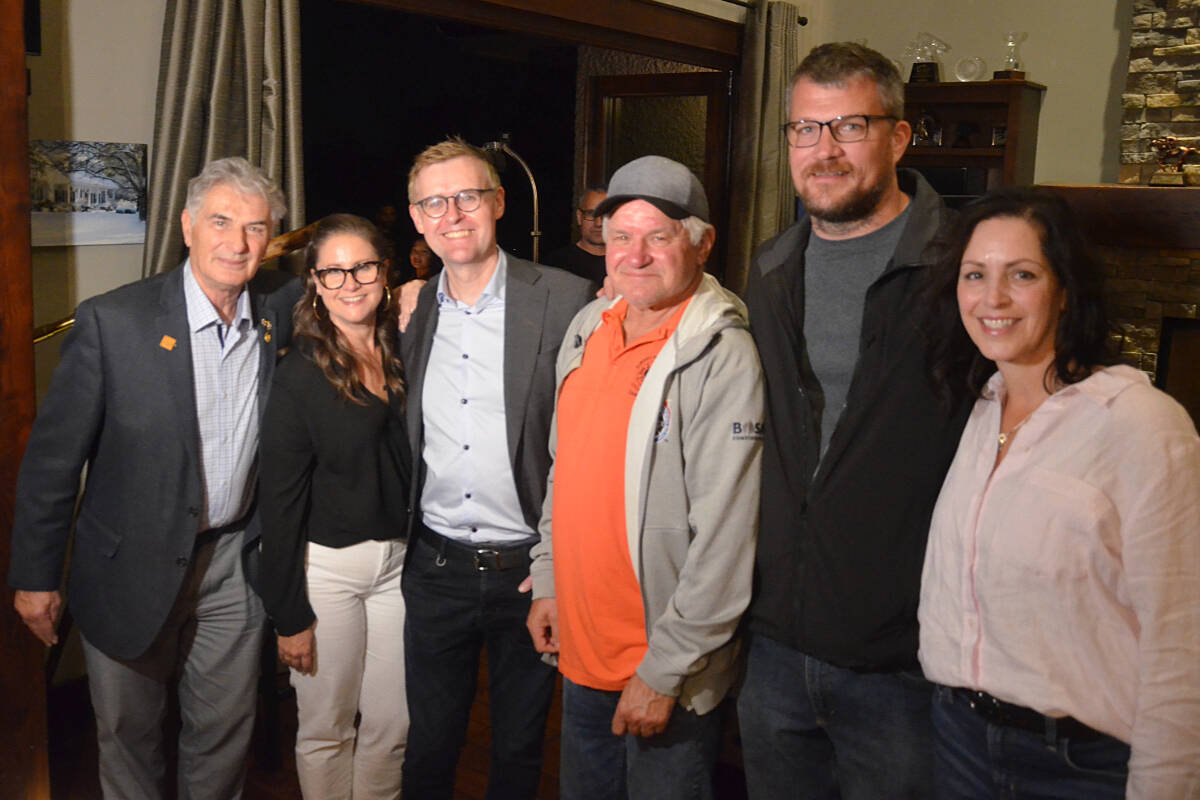 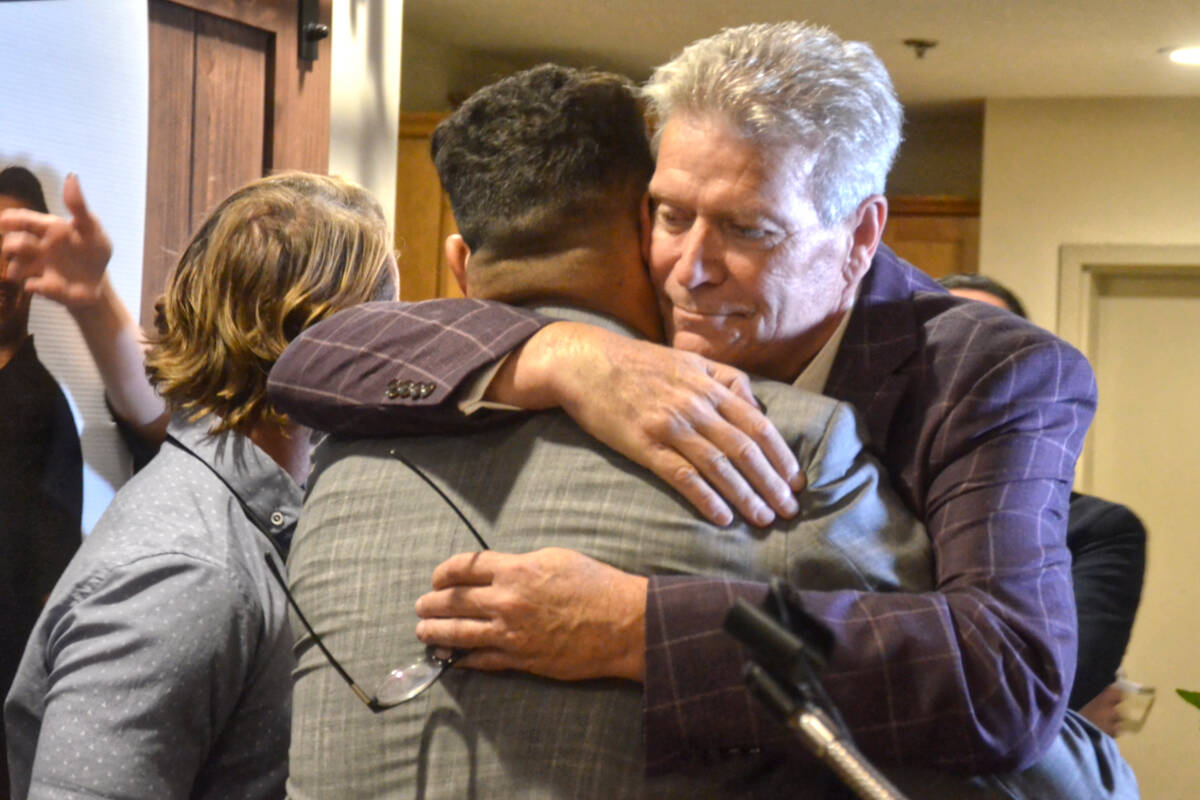 The atmosphere was somewhat sombre at the Coleman camp on election night. Former MLA Rich Coleman, and his Elevate Langley slate, acknowledged defeat Saturday. Coleman (right) offering condolences and hugs to his team that was defeated by Eric Woodward and the Contract With Langley slate in the Township election. (Matthew Claxton/Langley Advance Times) 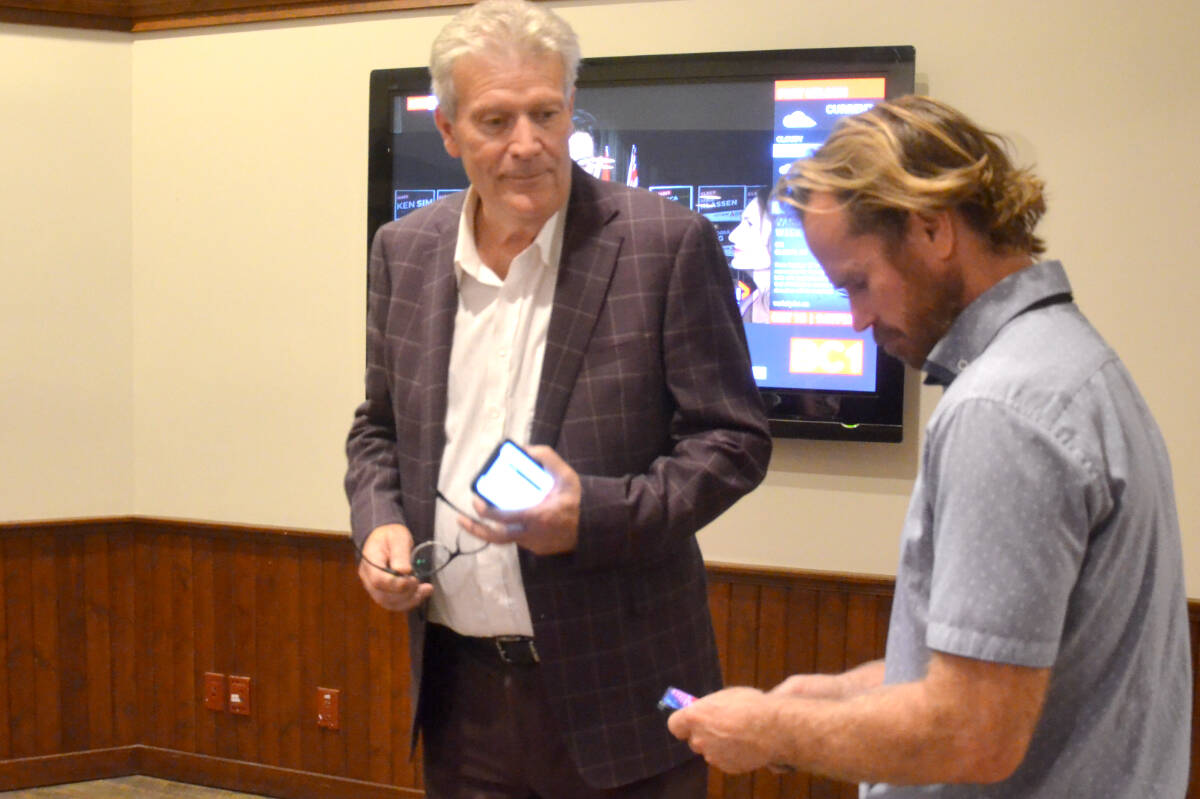 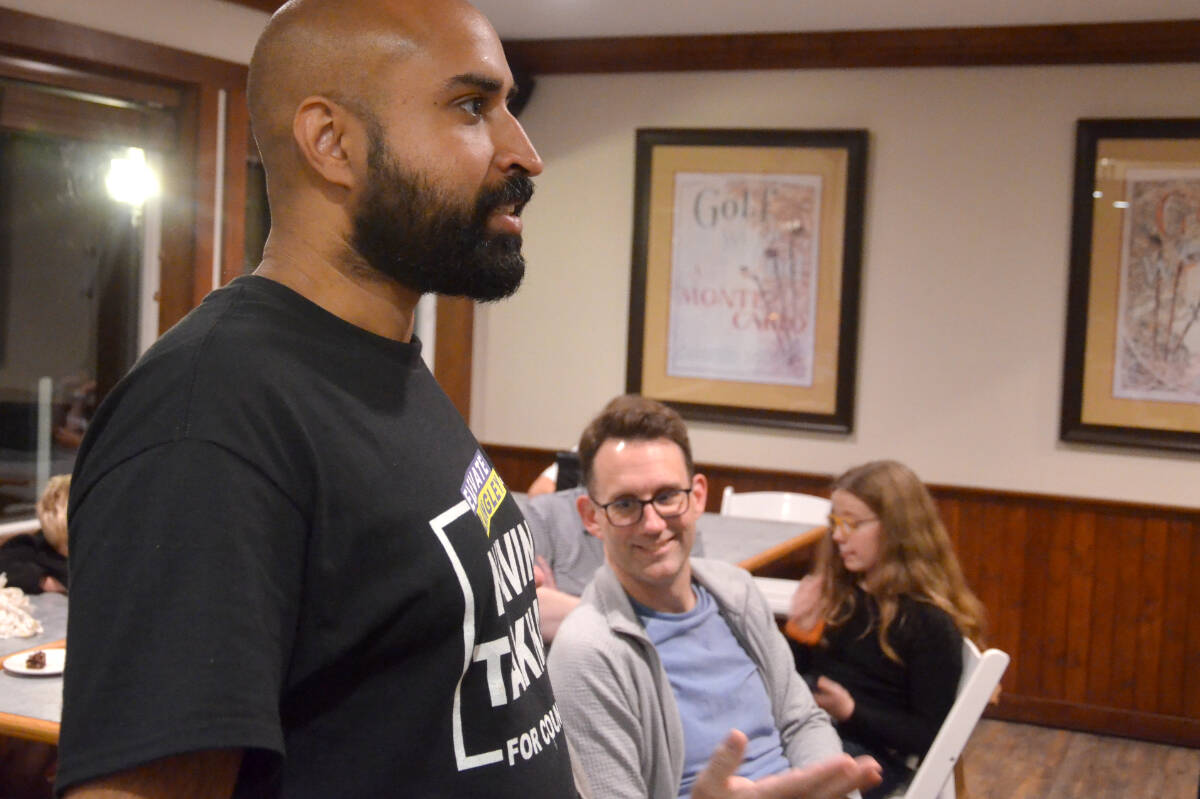 Navin Takhar was one of the Elevate Langley council candidates who lost in Saturday night’s election. (Matthew Claxton/Langley Advance Times)

Early results in the Langley Township civic election showed mayoral candidate Eric Woodward with a significant lead, and he never lost it as poll numbers came in this evening.

On the Langley school board, three of Woodward’s Contract with Langley slate were also elected.

Having nine out of 10 of the Contract candidates elected was “a monumental victory,” Woodward said. He added that he was disappointed council candidate A.J. Cheema was not also elected.

The new team, which will have a six-member majority on the nine-member council, will tackle their top campaign promises of fixing 208th Street and other roads in Willoughby, starting work on a new pool for the neighbourhood, and a youth soccer facility with an indoor field, he said.

The team’s plan also calls for a new housing plan and for 10 per cent of all future new housing to be affordable rental stock.

“We’re going to get underway very quickly on all of them,” Woodward said.

He said his team ran a great, positive campaign, and brushed aside any negativity during the last days of the election.

“None of that matters now,” Woodward said.

Whitmarsh, who came second in the polls, said he was proud of the campaign he and his team ran.

“But the electorate decided that they wanted to go in a different direction,” he said, wishing Woodward well.

He said he plans to stay involved in the community, and loved his eight years on council.

“It’ll be interesting to see if they can fulfil all the promises they’ve made,” Whitmarsh said of Woodward and his new majority on council.

Coleman conceded just minutes after the final results were announced just after 9:45 p.m.

“We put in our full effort,” said Navin Takhar, who ran with Coleman’s Elevate Langley slate.

He said more than 100 volunteers were out for the party on election day.

During the election, Woodward stressed that Langley was facing an “infrastructure deficit” and was in desperate need of completed roads, new sports and rec facilities, parks, and other amenities.

He promised he could upgrade the Township’s infrastructure, but emphasized that he needed a team – his slate of six councillors – to do it.

With five of the six Contract with Langley candidates elected, Woodward will have a majority on council to put his campaign promises into practice.

This marks the first time a slate has controlled Langley Township’s council since the Langley Leadership Team held a four-to-three majority in the 1996-99 term.

Langley Township council was facing significant change no matter what the results at the polls.

Three-term mayor Jack Froese decided not to run again, leaving no incumbent for the first time in decades.

The race for the mayor’s position heated up over the summer, as four challengers, all with local political experience, announced they would run.

Eric Woodward is a one-term council incumbent, who before his election in 2018 had already clashed with Township council and bureaucrats over his desire to redevelop some of the commercial properties he owns in downtown Fort Langley. Woodward created the Eric Woodward Foundation as a non-profit to put the profits of his lands towards local causes. His construction of the Coulter Berry Building was controversial, dividing Fort residents into opposing camps.

Running with Woodward was a slate of candidates, under the name Contract with Langley.

Blair Whitmarsh is a two-term councillor and TWU professor who is running as an independent. He’s run campaigns focused on sustainable development, a diversity of housing types, and job creation. He said he was running with no slate, but that he would be working with a “team of independent thinkers.”

Michelle Sparrow was a two-term councillor who was defeated in 2018, and is making her first run for the mayor’s chair. An advocate for beefing up the Township Fire Department, she committed to running a transparent campaign, taking no developer money and publishing all her campaign contributions online as they came in.

Rich Coleman has the longest political history in Langley, serving as a Liberal MLA for local ridings from 1996 to 2020. He held multiple cabinet positions and was deputy premier under Christy Clark, and an interim leader of the official opposition after the NDP’s victory in 2017.

Coleman has seen his share of political controversies, including his tenure as minister responsible for gaming, which came under scrutiny by the Cullen Commission, which was looking into money laundering in B.C. casinos.

Key issues raised by all candidates are housing and homelessness, issues around development, improving the firefighting service, and transit and roads.

There are 28 candidates running, including the two slates allied with Coleman and Woodward.

CRIMESTOPPERS: ‘Most wanted’ for the week of Oct. 16