The only physician he could point to was a palliative care specialist with the Delta Hospice Society, but said the policy change in December will have an impact on physicians, volunteers and donations to hospice facilities.

Warawa noted that a significant amount of funding for the Langley Hospice Society comes from private donors.

“And I’m one of those donors, and I am really thankful to be able to support hospice care that neither hastens nor postpones death,” he said.

Fraser Health funds the hospice residence near Langley Memorial Hospital where terminally ill people are able to receive care. The society has offices and space for its various bereavement programs at 20660 48th Ave. and has a contract with Fraser Health to provide volunteers for the residence.

The local hospice society board meets next week to craft a response to Fraser Health over the decision to have hospice facilities provide medically assisted dying.

“Our volunteers are very concerned and we may lose some due to this MAiD directive,” LHS executive director Nancy Panchuk said. “Donors are beginning to discuss withdrawal of their support to the society again due to this directive. “

She explained that the operation of the Supportive Program Centre on 48th Avenue is funded through private donations, the hospice society thrift store, gaming and various other grants.

Warawa said Health Canada is going through consultations with the provinces on how to provide medical assistance in dying (MAiD) and B.C. jumped the gun by making this policy change before those consultations were done.

Asked BC NDP Health Min @adriandix to reverse dangerous new mandate to force Hospice Care facilities to give assisted suicide. Dangerous because "Hospice is not to prevent or hasten death." https://t.co/l6EOvIfGkr

But Fraser Health said it and all health authorities in B.C. support MAiD services in all settings, including hospice.

“When a patient has made this decision, we need to consider how to offer it in the most patient centred way we can,” said spokesperson Tasleem Juma.

Since 2016 Canadians with terminal illnesses have had the right to choose to end their lives. Warawa said they have that right but MAiD should not take place in hospice and palliative care facilities.

“They have that legal right and they should be respected and honoured in that process,” he said. “But it just should not be happening in a hospice facility.”

The average time spent in hospice is about two weeks so people there are already near death, he noted.

People can be transferred to other facilities for MAiD just like they would be if they needed other medical proceduries like an x-ray, he added. About 30 per cent of physicians have said they are willing to provide assisted death so there are professionals available, Wawara said.

But the health authority needs to respect the mandate of hospice to not hasten nor postpone death, Warawa commented.

“We took a phased approach to the implementation of MAiD, and have been providing this service in our hospitals, community settings and residential care facilities for some time,” Juma said. “Though there is no hard and fast date for palliative and hospice care, in December of last year, we proceeded with the final phase of supporting MAiD provision in hospices and palliative care settings.”

During the first six months of 2017, British Columbia recorded 312 assisted deaths with 28 per cent taking place in hospital, 51 per cent in the patient’s home, eight per cent in a long term care facility, and nine per cent in other (defined as “palliative care hospice; clinician office; facility; undisclosed” by Health Canada).

The average age of those who used MAiD was 74.6 in B.C. compared to the national average of 73. Cancer was the main reason.

During the first six months of 2017, there were:

“Across the country, there were 1,179 medically assisted deaths between January 1, 2017 and June 30, 2017, accounting for approximately 0.9 per cent of all deaths in Canada during that time frame,” according to Health Canada. 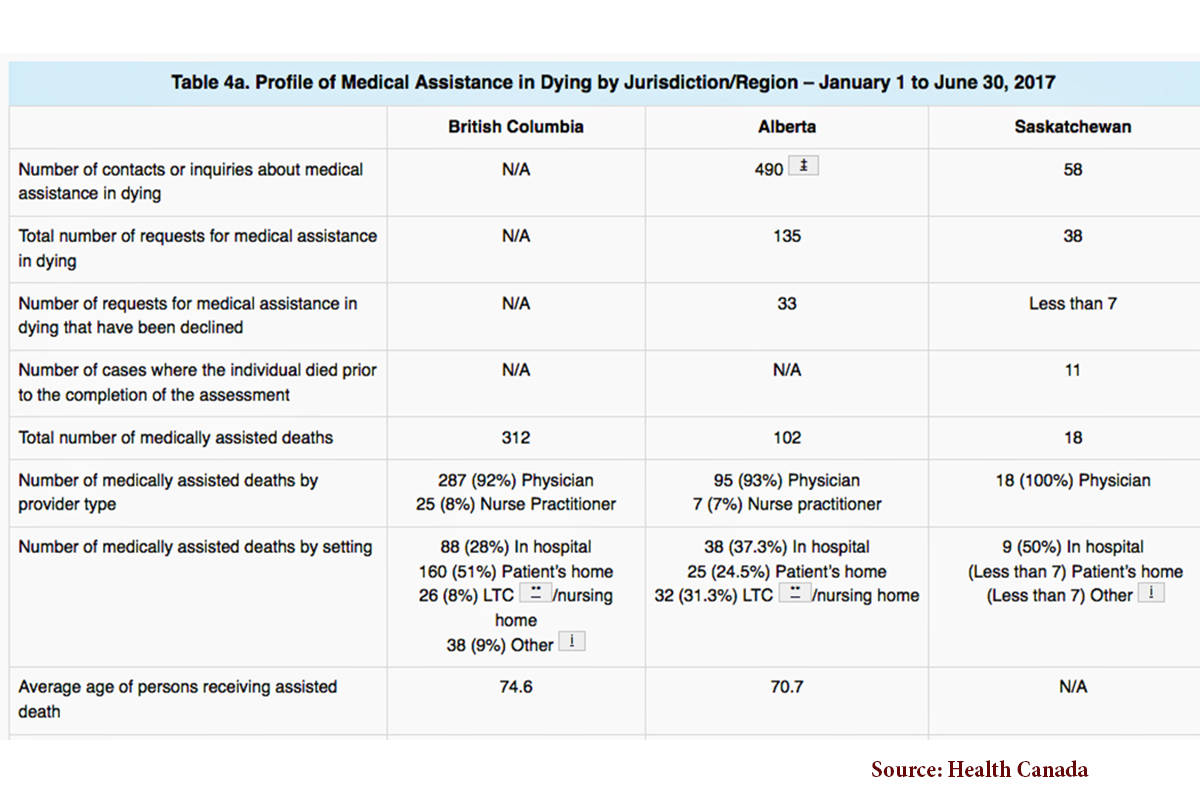