They’re not local people, but they cleaned up 18 bags of trash from Aldergrove’s downtown core on Sunday.

Andy Sward, whose been on a cross-Canada journey to clean up litter, touched down in Aldergrove July 5, to team up with Rob Rice of Trash Talk in Surrey and local Jocelyn Titus, founder of Cleaning Up Aldergrove.

The three anti-litter advocates gathered among a dozen volunteers to clean up waste accumulated around the old mall site and along Fraser Highway.

It marked the 100th bag of trash picked by Titus, who began five months ago encouraging others in Aldergrove take ownership of the community by cleaning up.

Aldergrove father Shawn O’Brien was one of those Titus inspired to join her movement.

On Sunday, he brought along his son Taylor, 12, who was more than willing to help.

“I like picking up trash,” the teen said with a smile.

“It gets him out of the house,” O’Brien remarked.

Titus, herself, was originally inspired by Rice, who 11 months ago made it his mission to remedy illegal dumping in industrial Surrey – otherwise known as the “Surrey trash-pocalypse.”

“Today is an amalgamation of great minds who are acting locally and thinking globally,” Rice said.

For Sward, a 49-year-old Vancouver resident and veteran of cross-country trash-picking, picking up litter out of doors has been “his happy place” since 2014.

That year, he embarked on his first trip across the Trans-Canada Highway, from Vancouver all the way easy to Cape Spear, Nfld.

“It started out with a goal to run across Canada just once. But litter on the side of the roads would bother me – so I started picked it up,” he said.

Since then, the marathon runner has crossed Canada two more times, he said.

He’s equipped with a baby jogger that has storage for essentials, including camping gear and, of course, bags for the trash, cans, and bottles he collects along the way.

“It’s got everything I need,” Sward told the crowd of volunteers that gathered for the Aldergrove clean-up.

But due to the COVID-19 pandemic, Sward’s plans to trek across Canada on foot this summer, at a pace of 50 kilometres per day for seven months, have been halted.

Instead, he’s decided to go “off of the beaten path” to adhere to provincial health guidelines in areas all over B.C.

“We’re fortunate to be in Canada right now [during the pandemic], a country with so much space and a relatively low population,” said Sward.

For his initiative, “Million Bottle Pledge,” Sward donates proceeds from the water bottles and pop cans he picks up to community causes in the area.

His pledge is to clean up one million bottles and cans from across Canada.

The reason why litter is so commonplace along roads and highways is because, as Sward puts it: “people are so concerned about keeping their cars clean that they throw garbage out the window, instead.”

“It becomes ‘out of sight and out of mind’ for them,” he said.

From his cross-country treks he has acquired other things – most noticeably a sense of gratitude, many new friends in cities all over Canada, and what he calls a “runner’s knee,”

Sward wears a knee brace which he remarked “helps keep things in place.”

Once Titus got a hold of Sward and told him about the anti-litter movements picking up steam in Aldergrove and Surrey, Sward made his way over.

“It’s inspiring to see things like this happening,” Sward told The Star.

After two hours of picking up trash along Fraser Highway on Sunday, the group properly disposed of littered human hair, face masks, a patio umbrella, and syringes from Aldergrove streets.

“We cleaned this area up last week,” said Titus, as she hauled a large bag of trash to dumpsters bags ripped open and waste strewn out on the concrete before them. 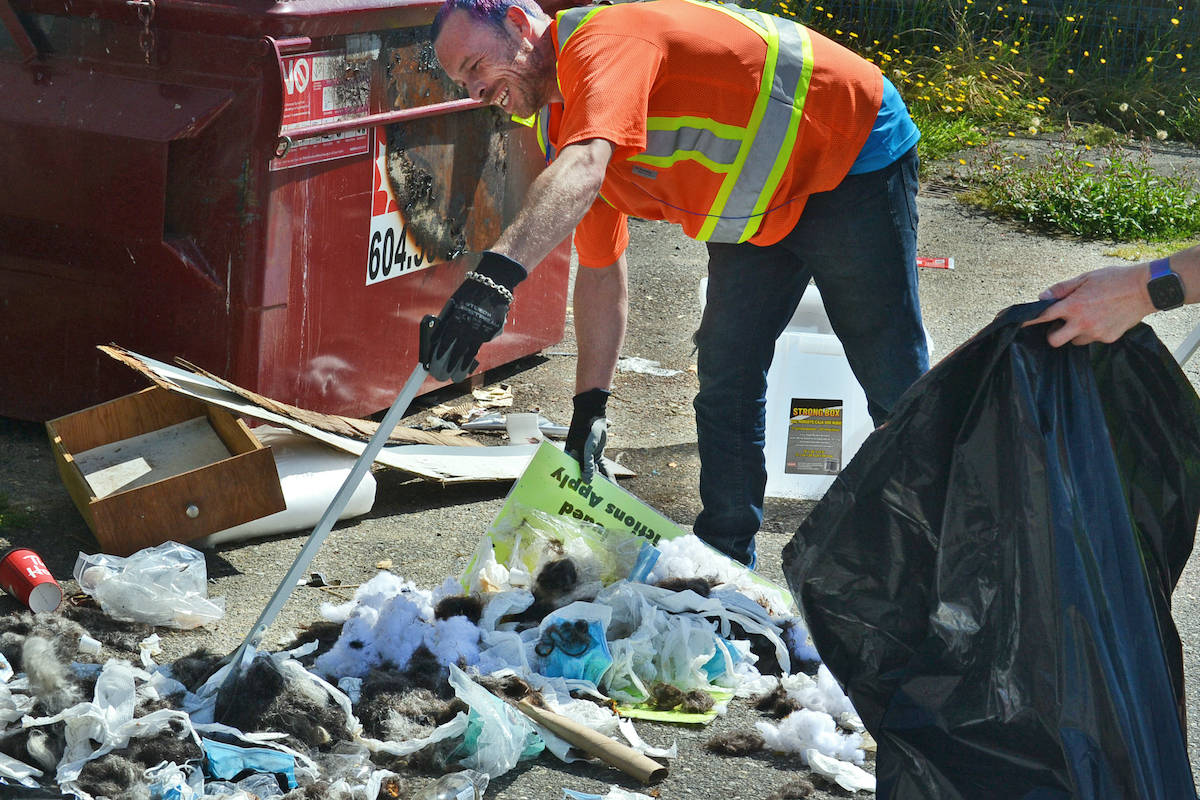 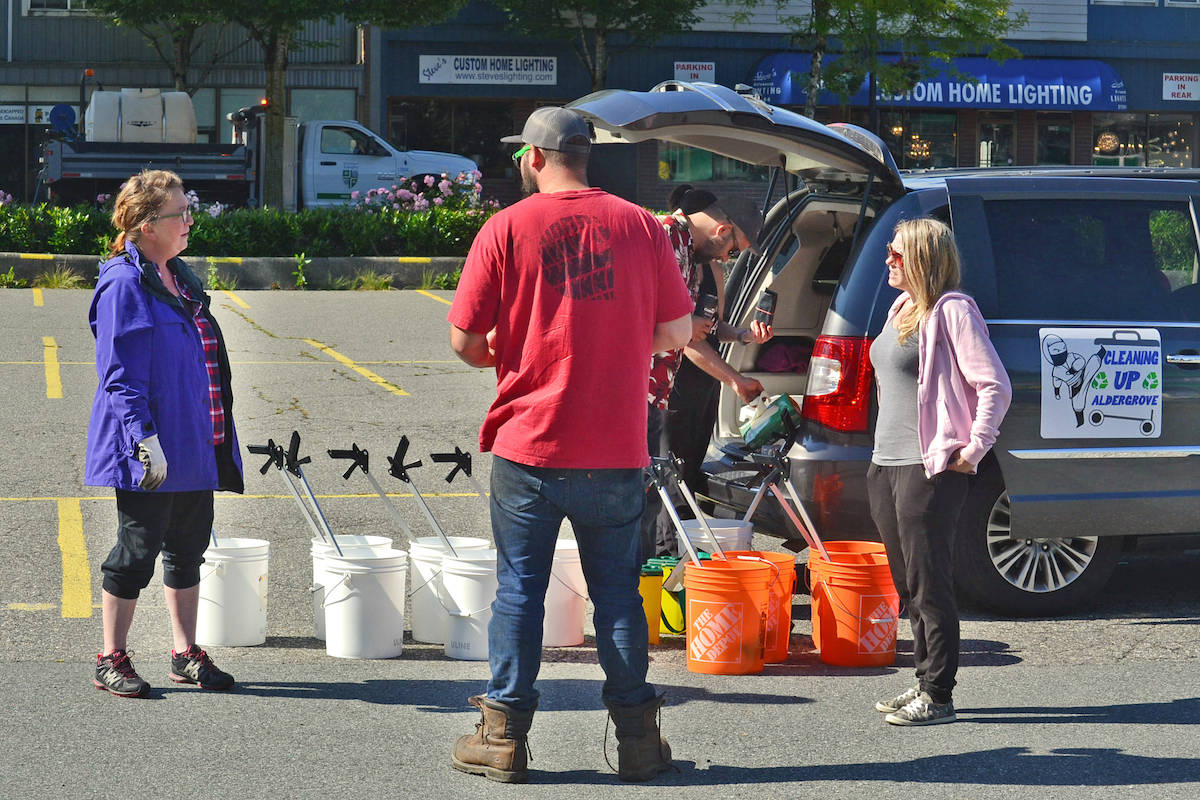 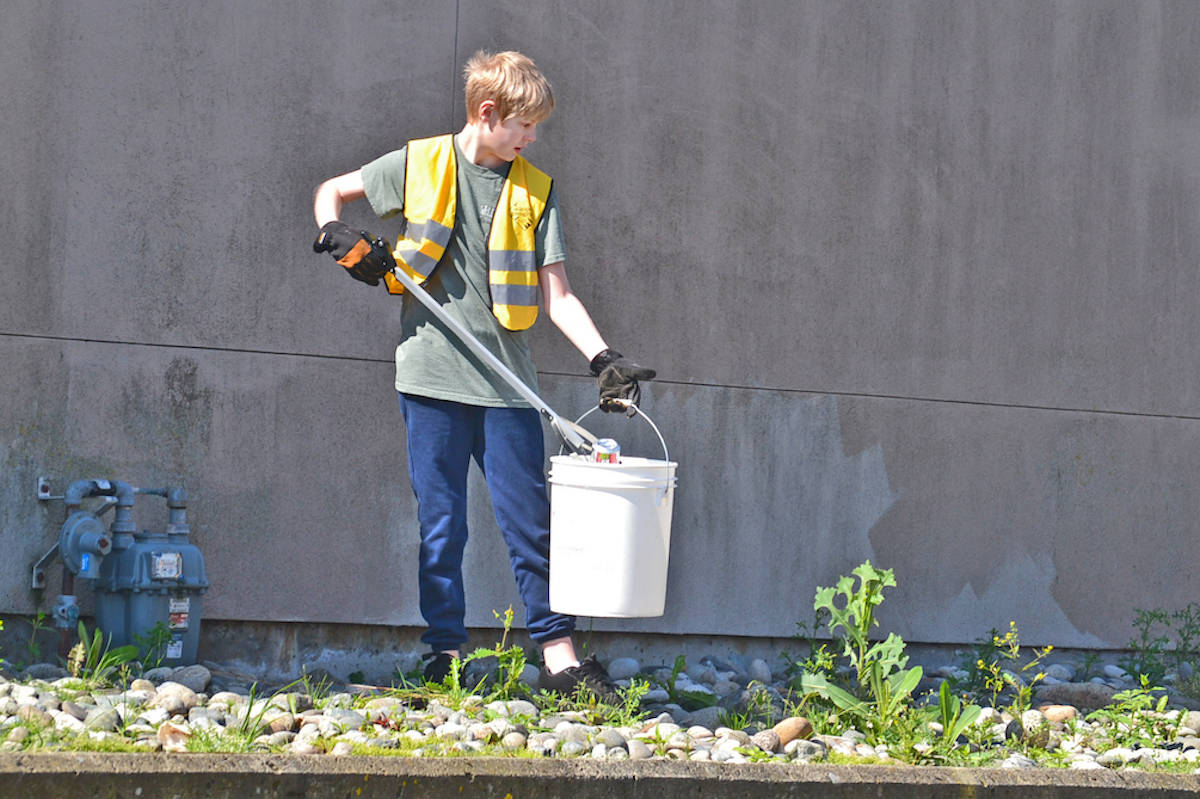