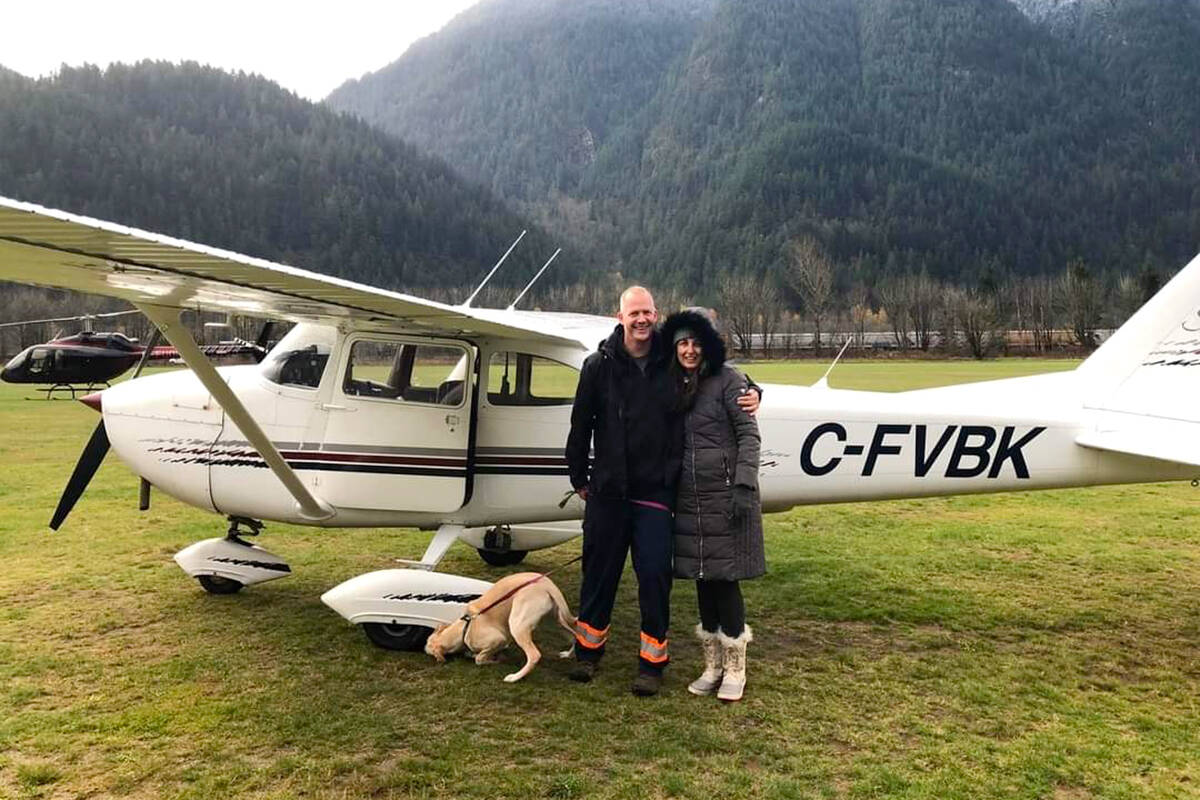 Lisa and Dave Craik with their dog, Mia, were rescued by Shari Morrison and airlifted from Hope. (Shari Morrison/Special to The News) 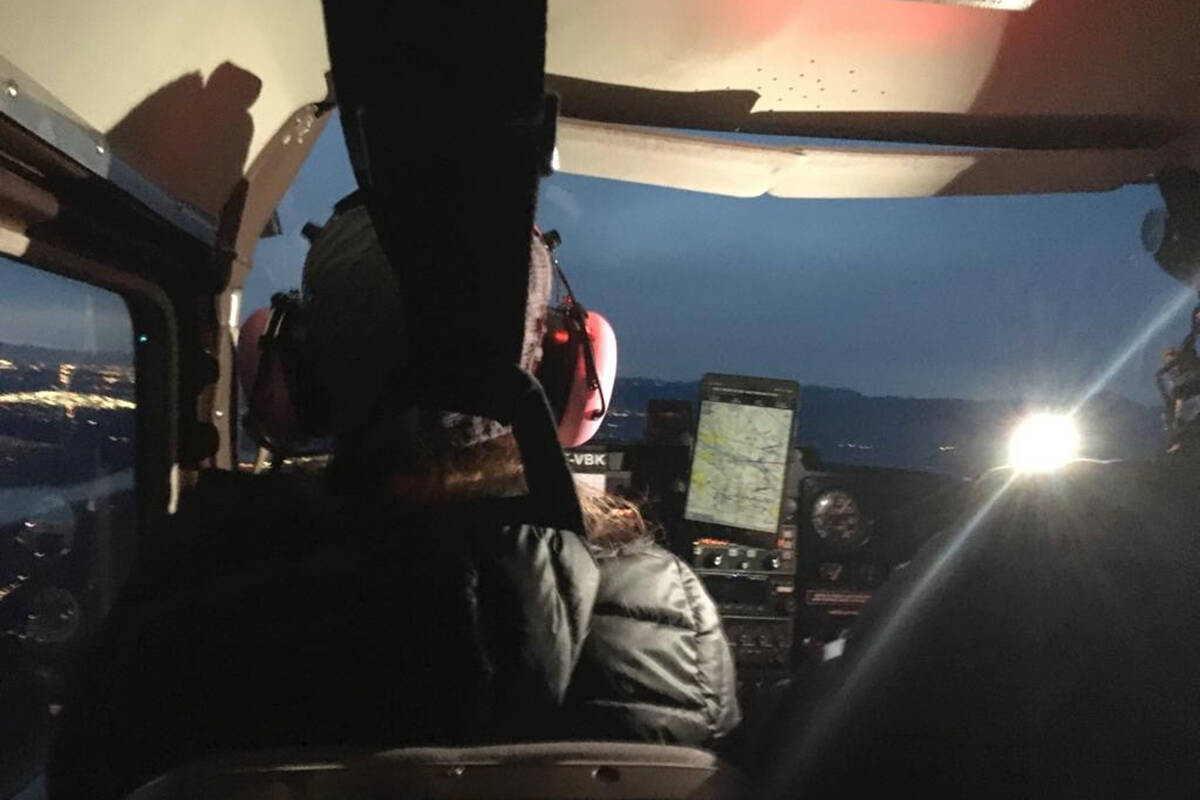 Several pilots out of Pitt Meadows, Maple Ridge and other parts of the Lower Mainland, have volunteered to bring people home from Hope since Tuesday. (Shari Morrison/Special to The News) 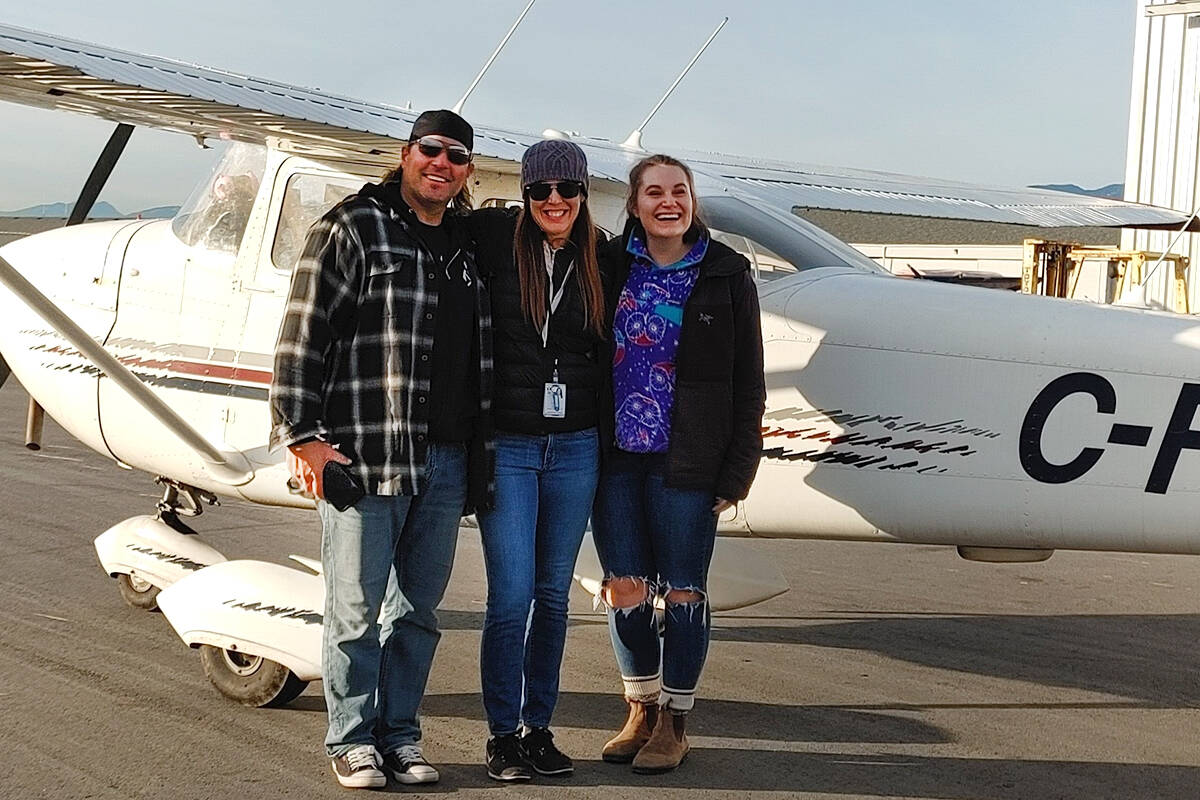 Shari Morrison, with the two of the people she brought back from Hope in her Cessna on Wednesday. (Special to The News) 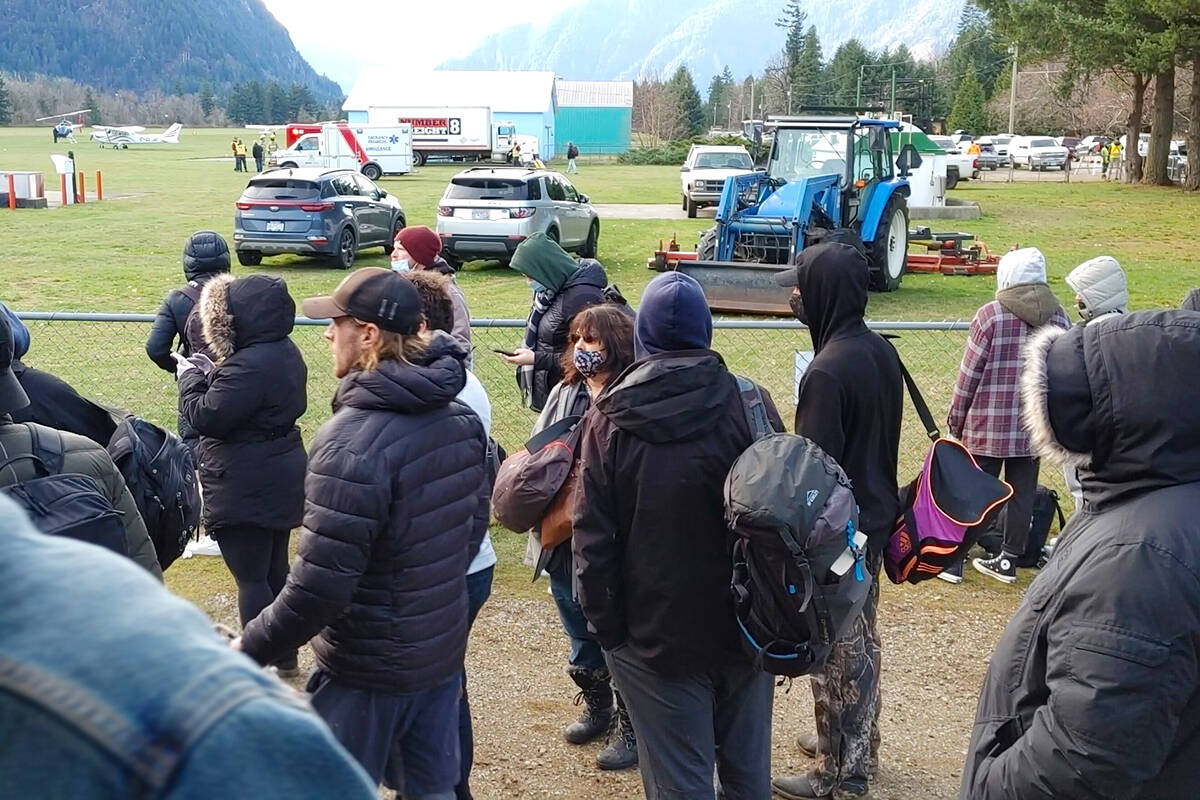 Several people stranded in Hope, trying to get out through the airport. (Shari Morrison/Special to The News) 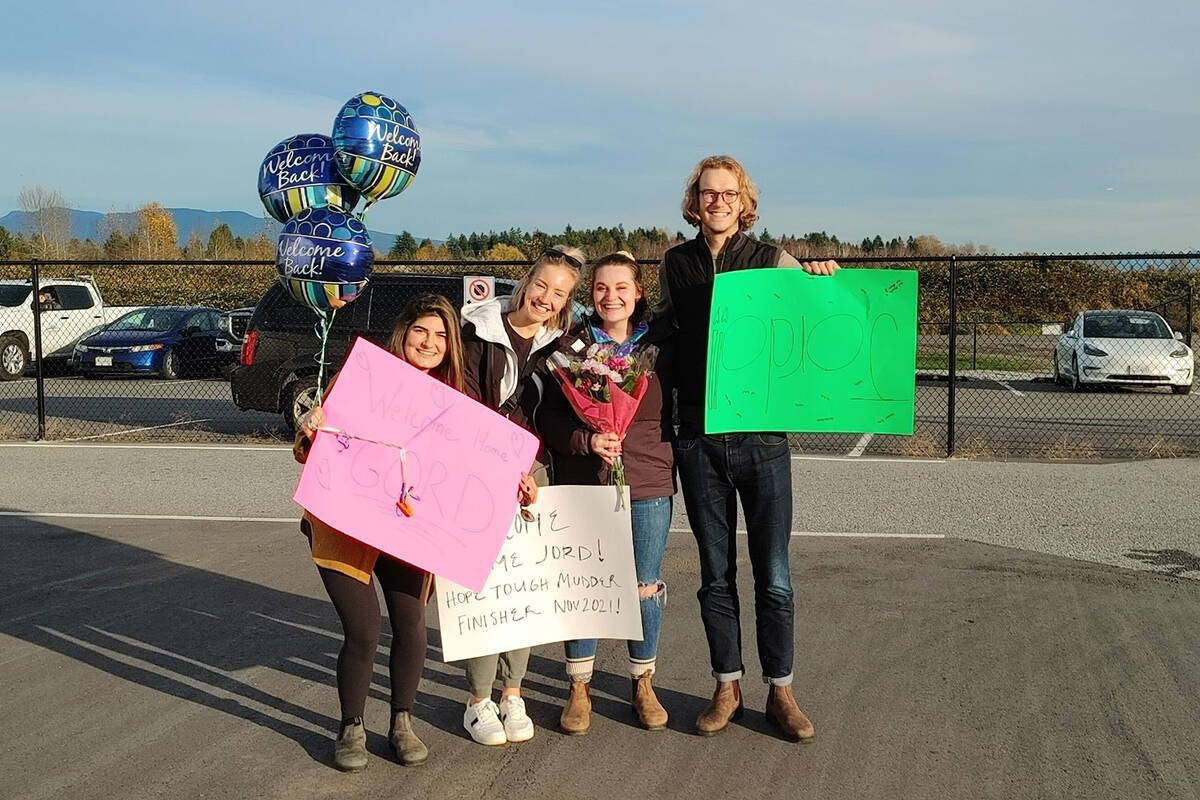 A girl was welcomed home by her friends with “Welcome back” balloons and cards, in tears after Shari Morrison brought her in from Hope. (Shari Morrison/Special to The News) 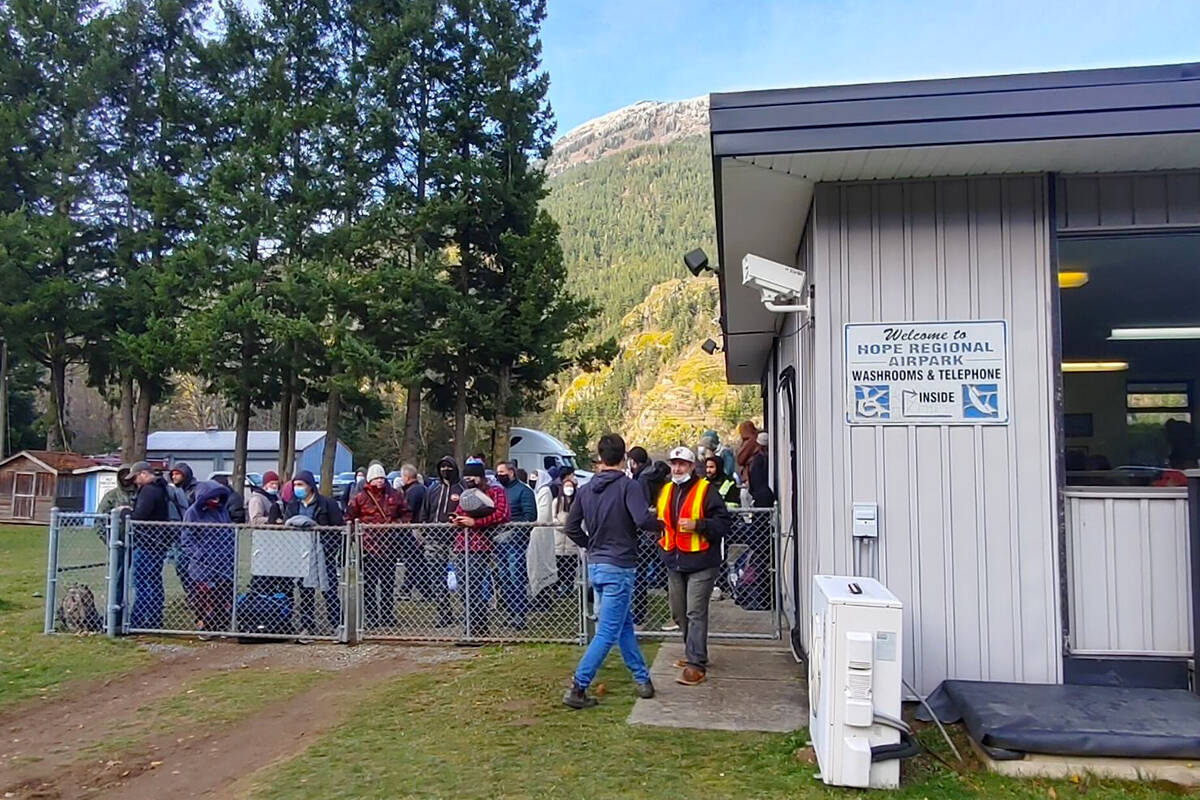 Several people stranded in Hope, trying to get out through the airport. (Shari Morrison/Special to The News)

What started as an evacuation for just a colleague and her family stranded in Hope, turned into a rescue mission for a Maple Ridge woman.

By Wednesday evening, local pilot Shari Morrison had made four trips, and transported eight people and an animal, from Hope to the Pitt Meadows Airport.

“I hadn’t realized the gravity of the situation until I landed there the first time, and so I gave my number to the airport personnel there in case they knew someone else who needed to be lifted out of Hope,” she said.

By the time she came back to Pitt Meadows, Morrison had 25-30 calls.

“I can only fit two people in my plane apart from me, and some luggage. So I connected with some other pilots in the aviation group to see if they are able to pick people up. When other pilots responded back saying they’d volunteer, I connected those I couldn’t pick up, with other pilots,” said Morrison.

The people she brought back were “unbelievably grateful” and it was overwhelming. One girl she picked up broke down when they landed and she saw her friends carrying balloons and banners saying ‘welcome home.’

“It was so sweet,” said Morrison.

“When I went back to Hope on Wednesday, there were at least 150 people there waiting to be evacuated. It was heartbreaking,” said Morrison, a realtor with RE/MAX LifeStyles, who started flying when she was 18 and got her private pilot license in 2018.

“This was truly made possible thanks to an amazing community of aviators who all pitched in to help. I’m proud to belong to such a great group of individuals,” said Morrison.

Mark Ahnert, a Coquitlam resident, had gone to pick up his wife and kids who were stuck in Hope. It hit him that he could be doing the same for someone’s else’s families as well. He came back and put a call out to other pilots he knew. Pitt Meadows aiport also put a call out for volunteer pilots to join in the efforts.

By Thursday morning, the group of volunteer pilots had brought back around 200 to 300 people to the Pitt Meadows Airport, said Andrea Backman, Ahnert’s business partner and spokesperson for the rescue efforts.

“Everything is voluntary and nothing is centrally organized anywhere,” she said.

Ahnert’s dealership, Kia West based out of Coquitlam, has been shuttling people to their homes from the airport once the pilots bring them back from Hope.

The pilots are flying in supplies and food when going into Hope. According to Backman, they are hoping to coordinate shuttling people back to Hope when it is safe, to be reunited with their cars.

“For now, there are still people stuck out there and – weather-dependent – more flights will take off to bring them home after their ordeal. In case people are looking for help, they can call us on 604-777-1292, and we are happy to coordinate their evacuation,” she said.