Renewing your home insurance, even if there is a wildfire within 50 kilometres, is entirely possible, says Rob De Pruis, Director, Consumer and Industry Relations for the Insurance Bureau of Canada, but if you have purchased a new home, it might be a little trickier.

De Pruis says that even in a state of emergency your policy will automatically give you a 60 or 120 day renewal at the same cost.

“There is no increase because of imminent threat,” he said.

But typically, getting a new policy during a period of wildfire activity close to your community is more difficult.

Darren Close, Managing Broker for Royal LePage East Kootenay Realty in Kimberley say that this is not new and is something realtors have been managing for years.

“Every year during fire season some insurers halt issuing “new “ policies if a fire is out of control within 50 k,” Close said. “We have not had any delays thus far this year that I’m aware of. Home owners with existing policies will be able to renew without challenge, though they could face a marginal premium increase given the inability to shop around for a new policy.

“I like to let my clients know that once fire season is over, they can shop around for a new policy. If they find something better, they can cancel the current policy and this will also give them better options in the future, with the new policy not renewing in peak fire times.”

De Pruis says that there are a few work-arounds for those who have purchased a new home during fire season. They will involve a few phone calls and some paper work, but they can be successful.

You can delay the possession date until the threat is over, he says. Another option is to contact the insurer the homeowner is already with and ask to have your name added to the policy.

“These are options,” he said. “Every insurance company operates differently. Talk to them. Even if the fire is within 50 kilometres, if you can show the home is not under threat, sometimes that can be effective too.”

Speak to a company you have a long term relationship with, he says. Loyalty will work for you.

These are all temporary measures, but they can work for you until the fire season is over, he said.

The only situation where you will not be able to get insurance is if your property is already on fire.

“We have had people call and tell us that they have been contacted by their local government or regional district that their property is in imminent threat and ask about insurance. There’s no insurance if your property is about to burn. That’s always impossible.” 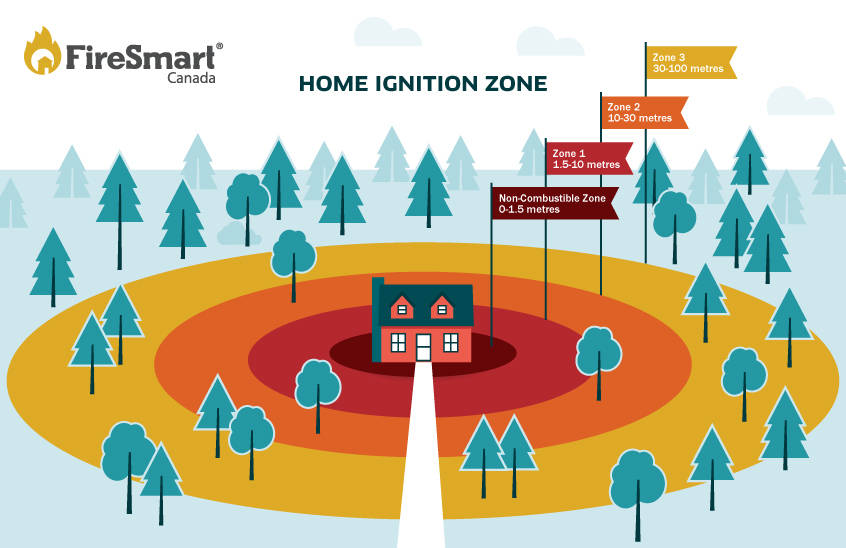 One thing homeowners can do during fire season is to make sure your property meets FireSmart principles. FireSmart Canada graphic

Du Pruis says wildfire claims, while significant, are a drop in the bucket in terms of what the Canadian insurance industry pays out in a typical year.

“Fort McMurray was the costliest in Canadian history at $4 billion. But fire insurance is still readily available in Fort McMurray, even though there were over 60,000 claims.”

Of concern overall, he says, is the rising claims paid out for severe weather events, of which wildfires can be a part.

“Between 1983 and 2009 the industry paid out $425 million for severe weather events. In the past decade that has increased to $1.95 billion. That’s a 360 per cent increase this decade. That’s all kinds of events; the Calgary hailstorm, flooding in Quebec and Ontario.

“There is an opportunity for more collaboration with governments, property owners, all stakeholders to help prevent some of these damages,” he said.

And during fire season, one thing homeowners can do is try to use FireSmart principles on their own properties to reduce combustibles close to their homes.

“It’s one thing you can have some control over,” he said.

COMMUNITY CALENDAR: Langley events in the closing days of September and into autumn 2022