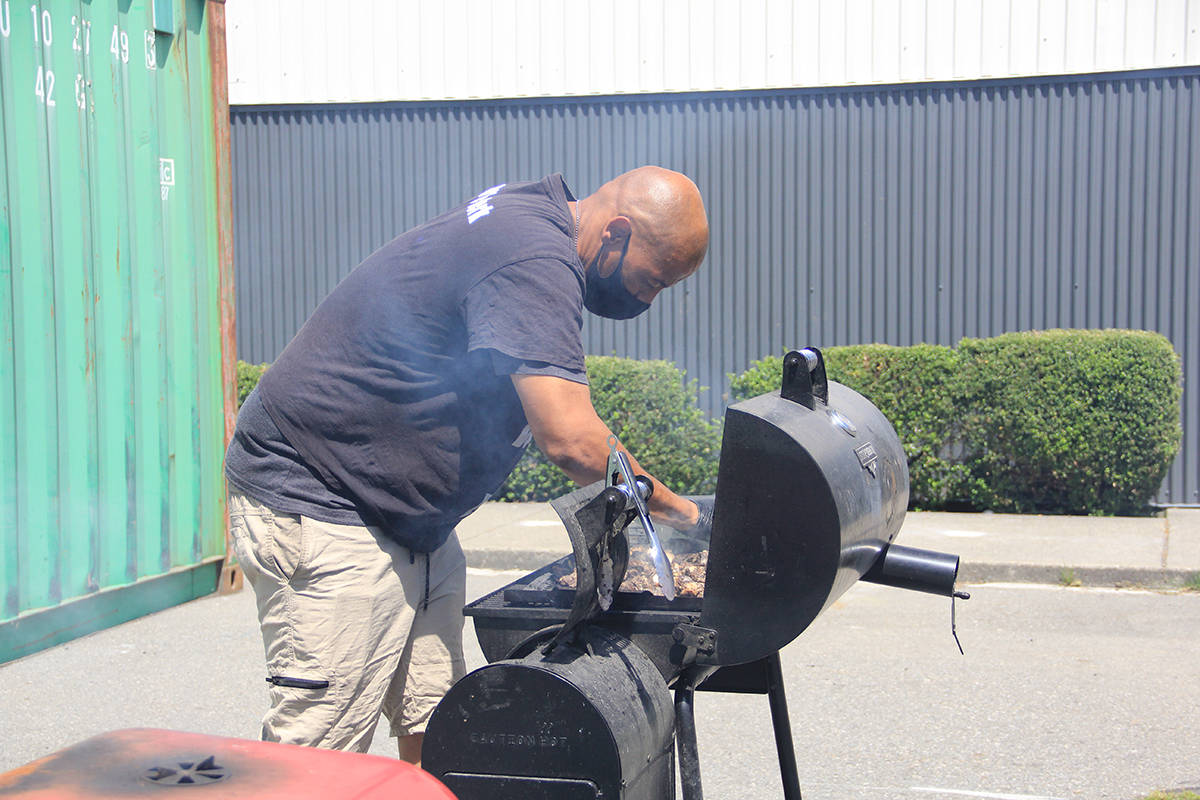 Tai Brown works the grill at Tommie’s Jerk in Cloverdale. The new Jamaican eatery opened up a few months ago in space next to the Cloverdale Community Kitchen. (Photo: Malin Jordan) 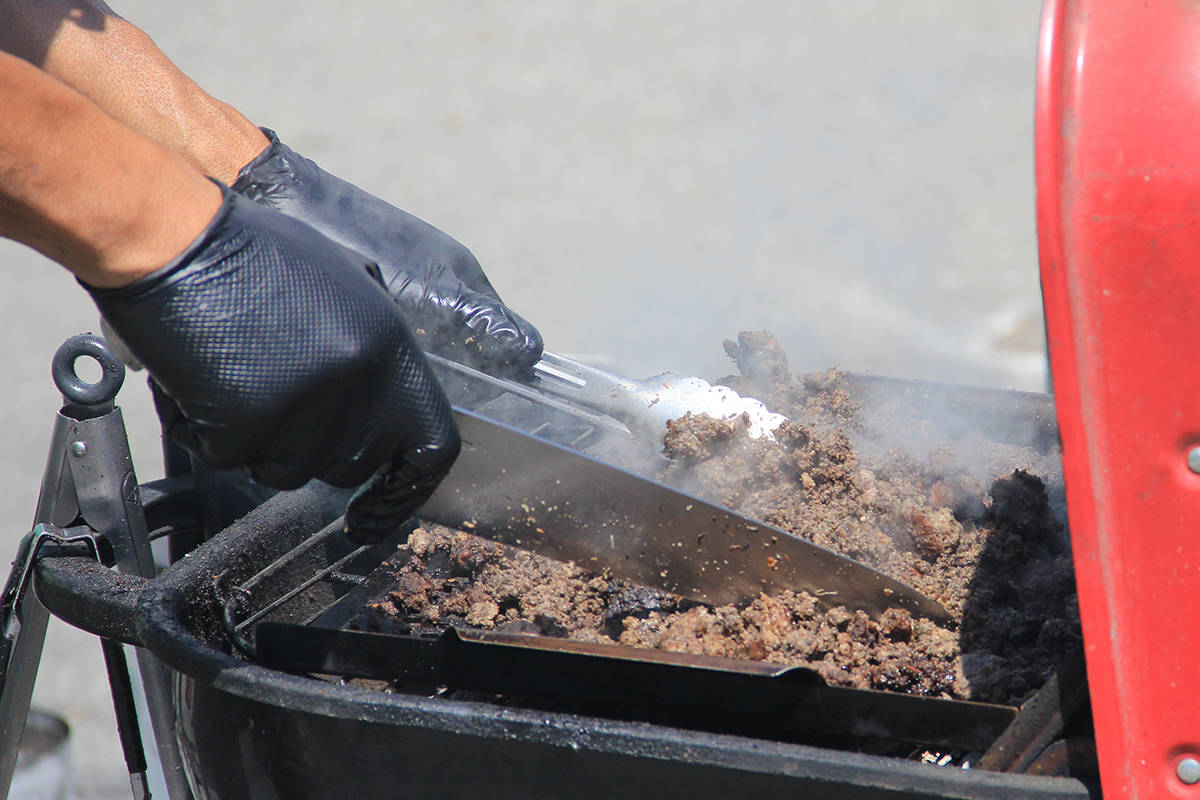 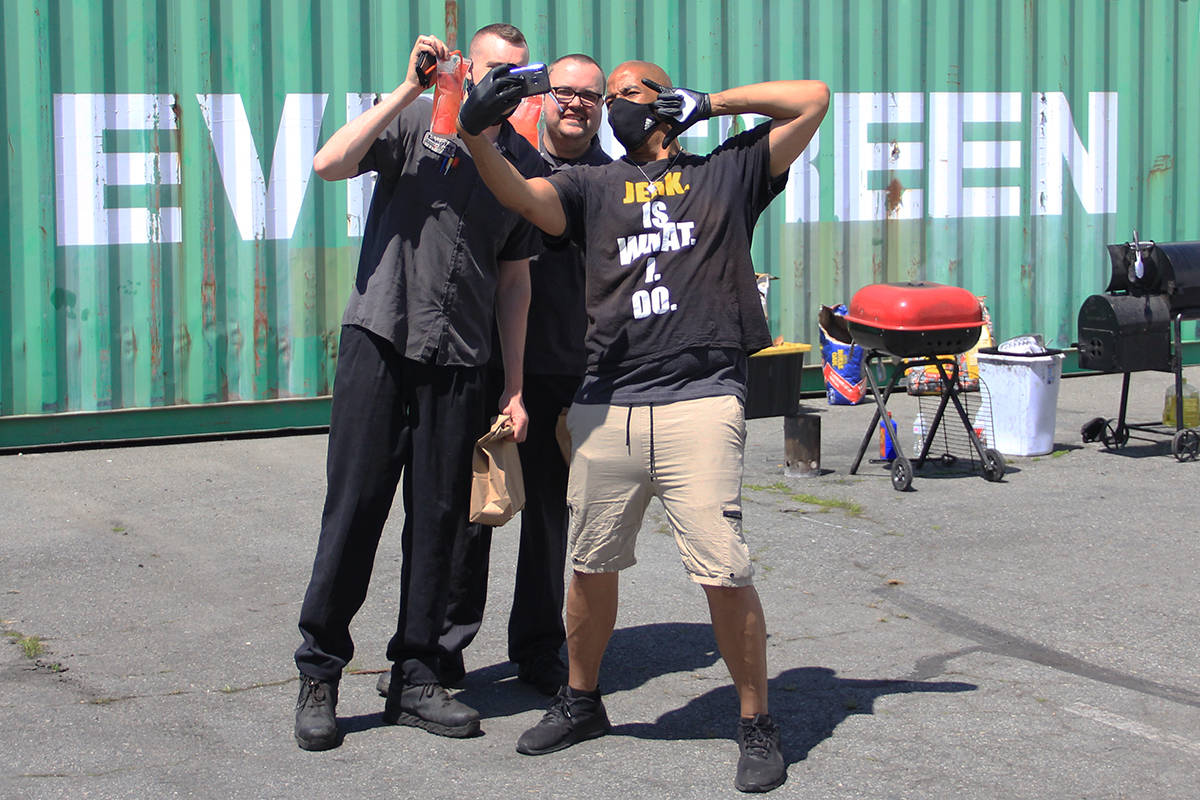 Tai Brown stops to take a selfie with some customers at Tommie’s Jerk in Cloverdale. (Photo: Malin Jordan) 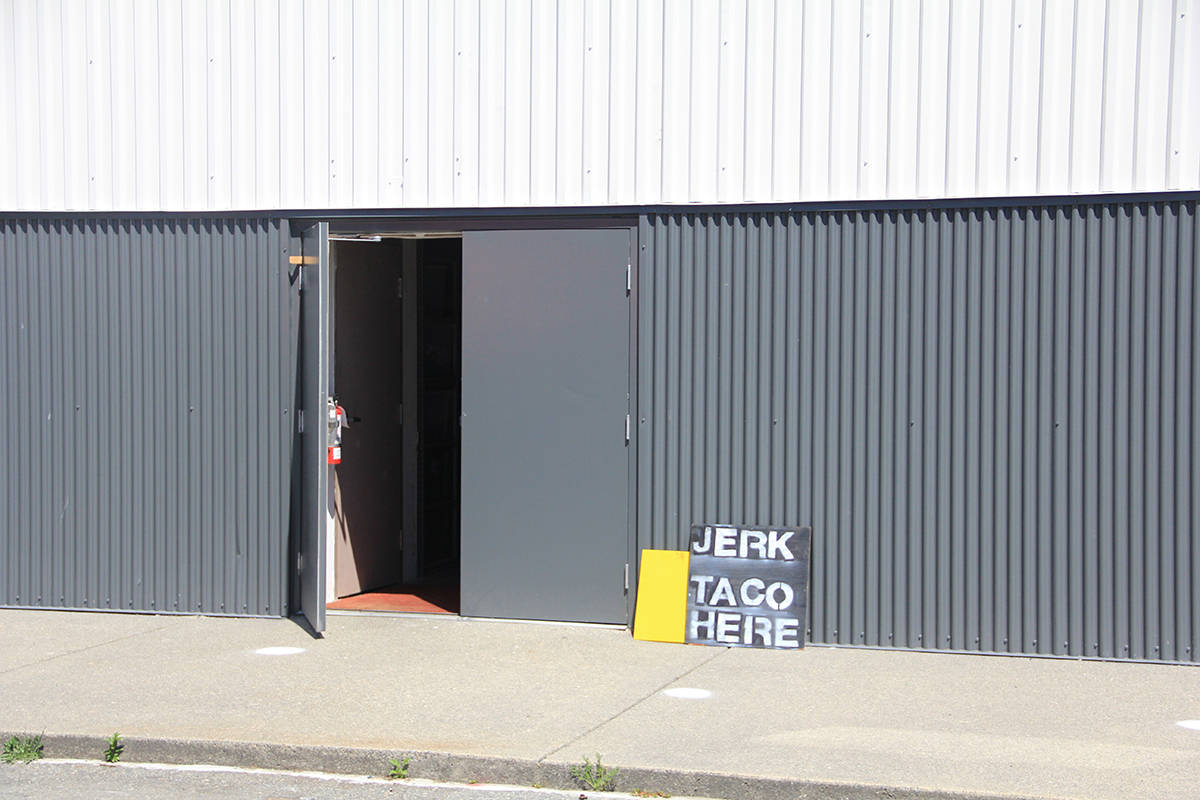 Tommie’s Jerk opened up a few months ago in space next to the Cloverdale Community Kitchen. (Photo: Malin Jordan)

A new Jamaican restaurant has popped up in Cloverdale.

Tommie’s Jerk has been offering a variety of tacos and burritos for a few months now.

The Facebook page for Tommie’s bills the new take-out shop as “a fresh & innovative way to share Jamaican jerk chicken tacos.” But the eatery is so much more.

Located behind the Cloverdale Community Kitchen off 180th, the small restaurant has a nondescript door and a humble sign. When I arrive, BBQs in the parking lot smoulder as smoke from grilled jerk chicken and beef swirl through the air. The smoke drifts through the parking lot and over the shipping containers that house the low-cost bike shop, Cloverdale Community Cycles, next door. Music drifts across the lot too.

Owner Tai Brown jumps out a door and hits the grill to chop and turn some meat. He then chats to some customers. Runs back into a small doorway to grab some food. Takes a selfie with some other customers. Jumps back inside. Brings some free samples out for yet more customers. Runs. Jumps. Slides.

The man moves at a bounce. And at 6’4” – 240, it’s a big bounce. But he’s light on his feet and it seems to reflect his personality too: nimble and passionate.

When I chat to Tai, his face reveals everything you need to know about the man. He can’t hide who he is. A big smile reflects the size of the love he has for both people and food. His eyes are windows that show the joy the man lives with today after passing through “dark times,” as he describes it, and coming out the other end, scathed, but ultimately healed and better for it.

As Tai chats to customers, and he chats to every customer, his contagious joy infects all and everyone leaves with a smile on their face.

He named the restaurant for his birth mother, who still inspires him, and the idea to open a restaurant was born from a desire to import his culture and love of food to Canada.

Originally from the Windy City, Tai followed a woman up here several years ago. The relationship eventually ended, but he fell in love with life north of the border and stayed.

As Tai was contemplating which food route he would travel, he started experimenting with his cooking.

He stumbled upon the idea of making jerk tacos/burritos. Usually jerk chicken is served as a whole leg/thigh, he tells me. But with the tacos and “more experimentation to come,” Tai feels he can reach a larger customer base.

He got the Jamaican side of his culture from his adoptive mother Ceolia, a Jamaican immigrant to Chicago in the ’60s.

He says she used to experiment with everything from Gouda-stye mac and cheese to gourmet dishes.

“There would be lines of people outside my house when my brother and I got home from school. Anyone from the mayor to a man down on his luck would eat at my mom’s table.”

That table of great food and experimentation rubbed off on Tai.

He says he’s done a tonne of different things, but ultimately hitting Vancouver’s 420 a few years ago was his turning point. He went down to Sunset Beach in a chef’s jacket one April to test his wares on the masses.

No one knew anything about Tai or Tommie’s Jerk, he says, so when he got to the beach, he just looked for the biggest man he could find. Someone who would tower over Tai.

“I said to him, ‘Listen, how ‘bout I feed you? Just taste it. If you don’t like it, it’s okay. You’re not going to hurt my feelings. I’m not looking for trouble with you. We know that.’ So he said, ‘fine.’ And I made it and gave him a drink.”

Tai says the big man took a few bites and did not say a word. As he stood speechless, the big man’s girlfriend ripped the taco out of his hand and took a bite. “She said, ‘Yeeeee-aaaaah! This is so good.’”

After that the couple spread the word through the crowd.

“It took me more time to find parking and walk there than it did for me to sell all my food,” he laughs.

Tai realized he wanted to bring that experience to a brick and mortar shop close to his Surrey home. Tai lives on the Cloverdale-Newton border.

After searching around for a bit, Tai contacted the Community Kitchen as they had some space for rent. And after navigating an enormous amount of red tape from both the City and Fraser Health, Tommie’s Jerk opened in March.

Going into his fourth month at the Community Kitchen location, Tai says he’ll open a restaurant in the Cloverdale area by the end of the year.

“Cloverdale has shown me so much love and it’s been really, really good, so far,” he says. “But we’re out of the core area. We’re way, way back at the end of a cul-de-sac.”

He says he likes Cloverdale because it’s a crossroads and he gets a large amount of business from people in both Langley (a lot of folks working at dealerships) and Newton. But he adds he’ll be able to draw more customers with a more centralized location. He also wants a proper seating area. Currently people can sit outside, which he says is fine for now, but once winter hits, he’ll need that indoor seating.

So far, business has been good and word of mouth has been his best marketing tool.

Tai says he can’t take credit for that, but I remind him that he made the food, served the people, and built those relationships.

“Well, I listen to my customers,” Tai laughs. His smile hangs on his face. “They’re like, ‘Hey, why don’t you try this or try this?’”

Tai thinks if one customer wants something specific, then it’s not a stretch to think another customer will like the same thing. That attitude keeps him open to trying anything.

“I’m working on a ground pork recipe to see what happens and it’s gotten rave reviews so far.”

His trial process involves dozens of tasters. If his pork passes muster with them, it’ll make the menu.

Tai went to Jamaica to learn firsthand the best practices of jerk-style cooking. He says Jamaican jerk isn’t just about the spices. “Jerk, ultimately, comes from the smoke.”

He strives for his food and his restaurant to be creative and innovative and to reflect the love both of his mothers (both now passed) had for people. And to honour both women.

I ask Tai what his ultimate goal is. He pauses for a moment. His big smile slowly starts to return, first at the corners of his eyes, then to his mouth, and then his cheeks glow. His innate passion now fully expressed on his face.

Tommie’s Jerk is located behind the Cloverdale Community Kitchen at 5337 180 Street and is open both Friday and Saturday from 12 – 8 p.m. Tommie’s is also available on Uber Eats and on DoorDash and he can found on Instagram and Facebook.