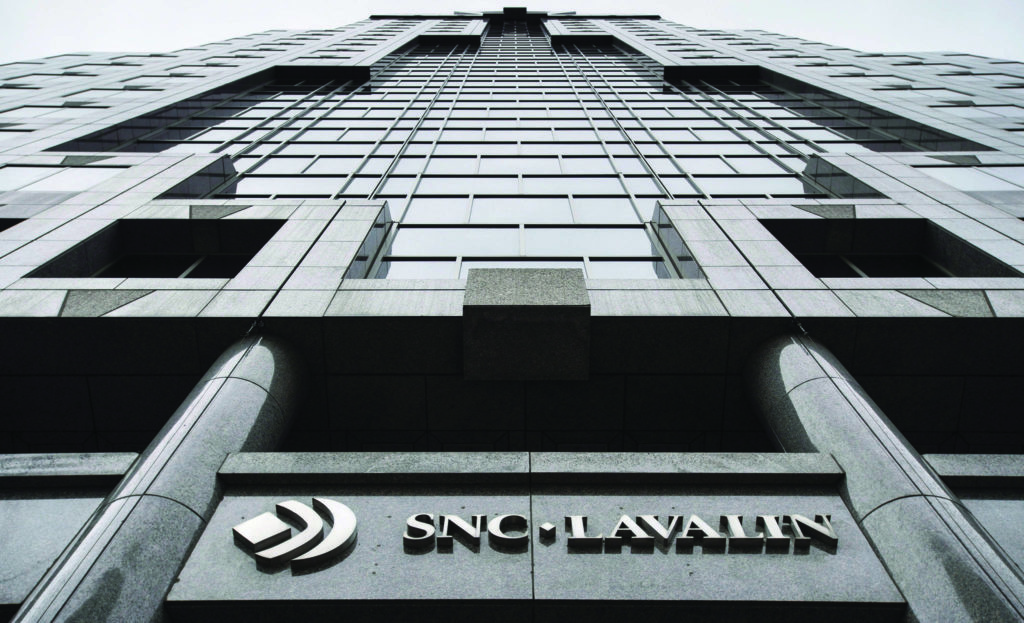 on November 6, 2014 in Montreal. SNC-Lavalin Group is cutting its quarterly dividend for shareholders by 80 per cent as the troubled construction and engineering company grapples with a $2.12 billion net loss in its second quarter. THE CANADIAN PRESS/Paul Chiasson

The head of SNC-Lavalin Group Inc. says he is not expecting a plea deal on criminal charges against the engineering firm in the wake of the Liberal election victory.

“We kind of remain focused on defending ourselves through a court process,” said Ian Edwards, regarding an upcoming trial on bribery and corruption charges linked to SNC-Lavalin’s alleged dealings in Libya between 2001 and 2011.

“Obviously if there were opportunities for settling this in another way, we’d be open to that. But we don’t expect it,” he said on a conference call with investors Thursday.

SNC-Lavalin shares shot up 14 per cent the day after an Oct. 21 Liberal election win, which left the door open to a deferred prosecution agreement that would head off criminal prosecution.

Attorney General David Lametti has refused to shut down the possibility of such an agreement, which would drop the charges against the firm in exchange for SNC admitting responsibility for breaches and agreeing to conditions such as a fine and third-party oversight.

On Thursday shares rose nearly 21 per cent or $4.06 to close at $23.81 — their highest in more than three months — after SNC reported earnings that surpassed analyst expectations.

The partial sale of SNC’s stake in the Ontario Highway 407 toll road drove a massive year-over-year profit increase. About $2.6 billion of the firm’s $2.76 billion in net income last quarter — up from $120.7 million a year earlier — came from the after-tax gains of the 407 sale.

The engineering services segment played a role too. Its backlog rose nearly 10 per cent year over year to $11.42 billion in the third quarter as SNC signed seven new contracts worth roughly $500 million. Segment revenue jumped more than 11 per cent to $1.58 billion.

Edwards, who was appointed president and chief executive Thursday after serving in an interim role since June, sought to showcase the fruits of his vision for the company. The firm is pivoting away from big, fixed-price construction contracts — where the bidder shoulders any cost overruns — towards a more stable business model that revolves around engineering services.

“It is still early days, but the decisions we made in July — to exit lump-sum turnkey construction contracting and reorganize the company to focus on our high-performing engineering services business — are demonstrating results, and I am encouraged by our progress,” Edwards said in a release.

SNC-Lavalin reduced its backlog of large, fixed-price contracts — which it aims to work off in the next two years — to $3.2 billion from $3.4 billion three months earlier. The bulk of them relate to light-rail projects in Canada, “which have traditionally…gone well for us,” Edwards said.

Some half-billion dollars’ worth of the lump-sum turnkey projects are for oil and gas, however, which do not have a history of turning a profit, he added.

The firm’s upcoming trial concerns charges of fraud under the Criminal Code and bribery under the Corruption of Foreign Public Officials Act.

The Caisse, Quebec’s pension fund manager and SNC-Lavalin’s biggest shareholder at 19.9 per cent, said it backs Edwards’ appointment as CEO.

“Since taking the reins of the company a few months ago, he’s clearly put emphasis on execution challenges. That’s a good starting point for the work ahead,” the Caisse told The Canadian Press in an email.

The results topped analyst expectations of adjusted income of $97.7 million or 26 cents per share, according to financial markets data firm Refinitiv.