Otter Co-Op Chief Executive Officer Jack Nicholson has penned a letter to co-op members and the media explaining that Langley’s longest operating grocer had no involvement in the bread price-fixing scandal that has hit many other large corporate grocers.

“The letter was prompted as we have had many guests inquiring in store on what, if any our involvement may have been,” Nicholson told the Times.

“It was just to set the record straight, and ensure our member/owners and guests understand that Otter Co-op is rooted in the community, is a different kind of business, and we stand behind our values of integrity, community and excellence.

“As well, guests were asking if and when we were going to hand out $25 gift cards, as several competitors that were involved in the price fixing had done so,” said Nicholson.

“Otter has no plans to hand out gift cards as Otter has not and will not participate in any price fixing. We receive costs from our suppliers, and add our appropriate mark up on that.”

It was Canada’s Competition Bureau that named a number of large companies headquartered in Central and Eastern Canada in an investigation into anti-competitive practices to fix the price of bread over the past 14 years.

The Great Canadian Superstore owner Loblaws was the first to offer a $25 gift card to its customers for participating in the bread price fixing. Save-On-Foods was second to offer a gift card but said it had not participated in price-fixing.

The bread scandal has unfairly painted all businesses with the same broad brush, said Nicholson in his letter.

He writes: “I don’t think anyone will disagree that we are living through a period of unprecedented change and challenge.

This is certainly true for Otter Co-op as we work hard to understand better how to serve our members and customers in an increasingly competitive world.

“These challenges are not made any easier when large corporate competitors do things that seriously erode everyone’s trust in businesses and how they conduct themselves… your co-operative is not under investigation.”

Otter Co-op recently unveiled its support and sponsorship for the new water park opening up at the Aldergrove Credit Union Community Centre. Otter Co-op donated $250,000 and now the water park will be named the Otter Co-op Outdoor Experience. 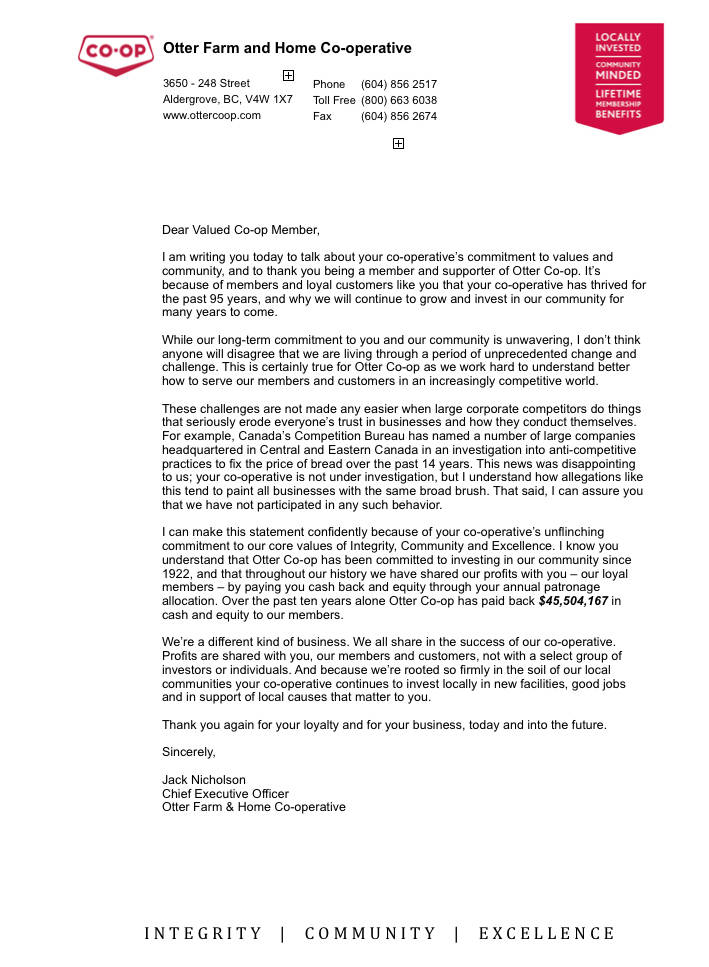