Township of Langley councillor David Davis fondly recalls his days as a kid spent running through the tall stands of conifers on Tara Hill.

The property — situated above Davis’ family farm on the Milner escarpment — served as an extended playground for the neighbourhood children.

“When we were kids, we used to come up Tara Hill on our dirt bikes and ride through the path all the way out. So I know the area quite well. It had big, huge, tall cedar trees,” he recalled, as he looked out across the nearly 18 acres of stumps that remain in the former forest at 21198 Smith Cres.

The north portion of the 52.6 acre property, which is located in the Agricultural Land Reserve, was cleared this past winter, and at the time, the Agricultural Land Commission was told the tree felling was done for farming purposes. However not long after, the owner applied to have the area removed from the ALR — an application that was forwarded to the ALC by council in a 5-4 vote on Oct. 23.

The owner, Tara Ridge Estates Inc. — which is co-owned by the same person who owns development company Marcon — is asking to have 19.8 acres removed from the land reserve to accommodate a future 212 Street Connector on 4.5 acres and “future urban development” on 15.3 acres.

According to a memo from Township staff, the proposal complies with the Regional Growth Strategy, the Township of Langley Official Community Plan and the Willoughby Community Plan.

“In November 1990, and subsequently in April 1998, the ALC endorsed the Willowbrook Land Use Proposal; and the Willoughby Community Plan, thereby approving, in principle, exclusion of the subject area from the property in question, including the proposed road alignment,” the memo states.

“In these communications, the ALC agreed with future exclusion of the identified areas, indicating that the southern portion of the property should remain in the ALR.”

Several calls to Marcon, asking for comment, were not returned.

But Davis, who voted in opposition, believes the land should remain intact for agriculture.

“This was the best agricultural buffer you could ever have. As a matter of fact, it’s going to take 100 years to go back to the way it was. This would have made one of the best buffers for a park,” he told the Times.

Coun. Petrina Arnason, Kim Richter and Michelle Sparrow all voted against the application as well.

Richter noted that in the Willoughby Community Plan, part of the area was earmarked for “a major park.”

Davis says that although he understands the value in building the 212 Street Connector, he believes a portion of the land could have been excluded for the road only, and trees could have remained on either side.

Furthermore, he says farmers downhill have already seen negative impacts from the tree removal. His family leases a corn field directly below the escarpment, and had unusual issues with flooding this past spring.

“I have pictures of water this deep running 30 feet wide off this clear-cut,” he said.

“Also, Petrina Arnason has pictures, they flew a drone over it … and when it snowed, you could see the green line from where the runoff gathered and went down the hill, where the old tobogganing run is. And you could see it, like this much water.

“What’s done is done, but it does affect drainage. When drainage is not controlled it’s going to affect agricultural practices, especially when it’s point-source water.”

Both Davis and Arnason said they were disappointed that as elected councillors, they were not included in the process. Nor was Davis contacted as a nearby property owner.

“As a sitting councillor, I would have appreciated having an opportunity to discuss this and to find out what was happening, rather than to be called by the residents of the community telling me that their neighbouring property was now being clear-cut and basically to find out there’s nothing I can do about it because — as Councillor Davis said — it’s in the ALR,” Arnason said.

“My understanding, even the ALR has directives and they do not want individuals who do not intend to farm property on the good faith basis to actually just go and clear-cut and then come back six months later and say, ‘Yes we’d like to actually put a development proposal forward.’

“People tell me all the time, where’s the greenspace in Willoughby? Why aren’t we protecting more? Where are the children supposed to play? And I agree with that sentiment and I think that we need to do whatever we can under the current circumstances to facilitate getting that to happen.”

Prior to council’s vote on Oct. 23, there were two delegations from members of the public requesting the land not be excluded from the ALR.

Kirk Robertson, a member of Watchers of Langley Forests (WOLF), said that the most interesting part of the staff report to council is “what it does not say.”

Robertson said that he came across a letter from 2004 between a Township planner and the ALC that says “the Township no longer met the criteria of the 1990 resolution for exclusion of land from the ALR,” particularly when it came to stormwater management. He said it is unclear if those issues were ever worked out.

“The decision before you is presented almost as a formality, this has already been worked out, is the implication,” he said. “It’s merely the umpteenth step in a long process. Any lingering questions will be worked out in subsequent steps, seems to be what is said.”

Noni Cicuto, a member of the Yorkson Watershed Enhancement Society, requested that if the land is excluded, it be done to create a public park, and that a moratorium on cutting trees and conducting further development work be placed on the property immediately.

“Make no mistake, this is less about transportation and more about encroachment into the ALR to allow for more development, and roads are a very convenient way to accomplish this,” she said. “With the development we see slated for the rest of Willoughby, why is this mature forested land, this excellent natural buffer between urban and farmland, being recommended for removal from the ALR, only for the purposes of development? Why hasn’t it been recommended for removal from the ALR for the purposes of enrichment for our community, such as conservation, recreation and education?”

In July, both groups also handed in a “Save Tara Farms” petition bearing 417 names, and have collected several more names since then. 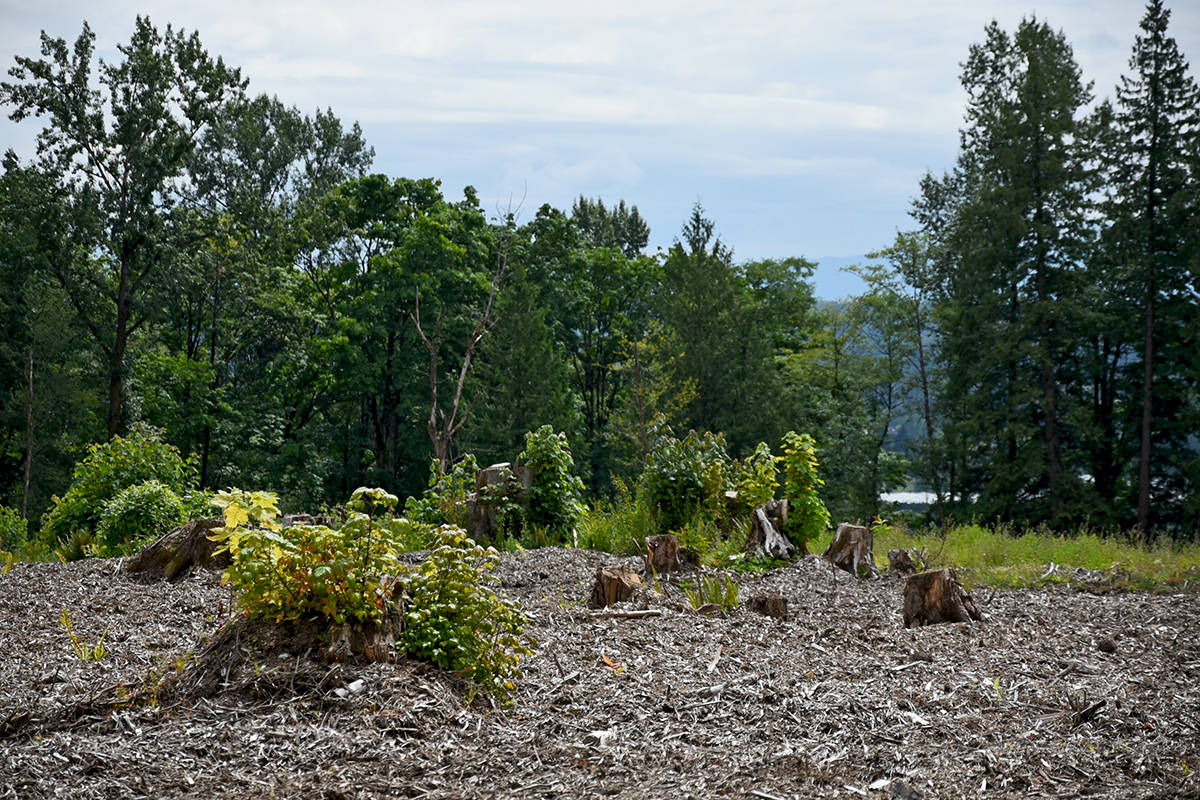 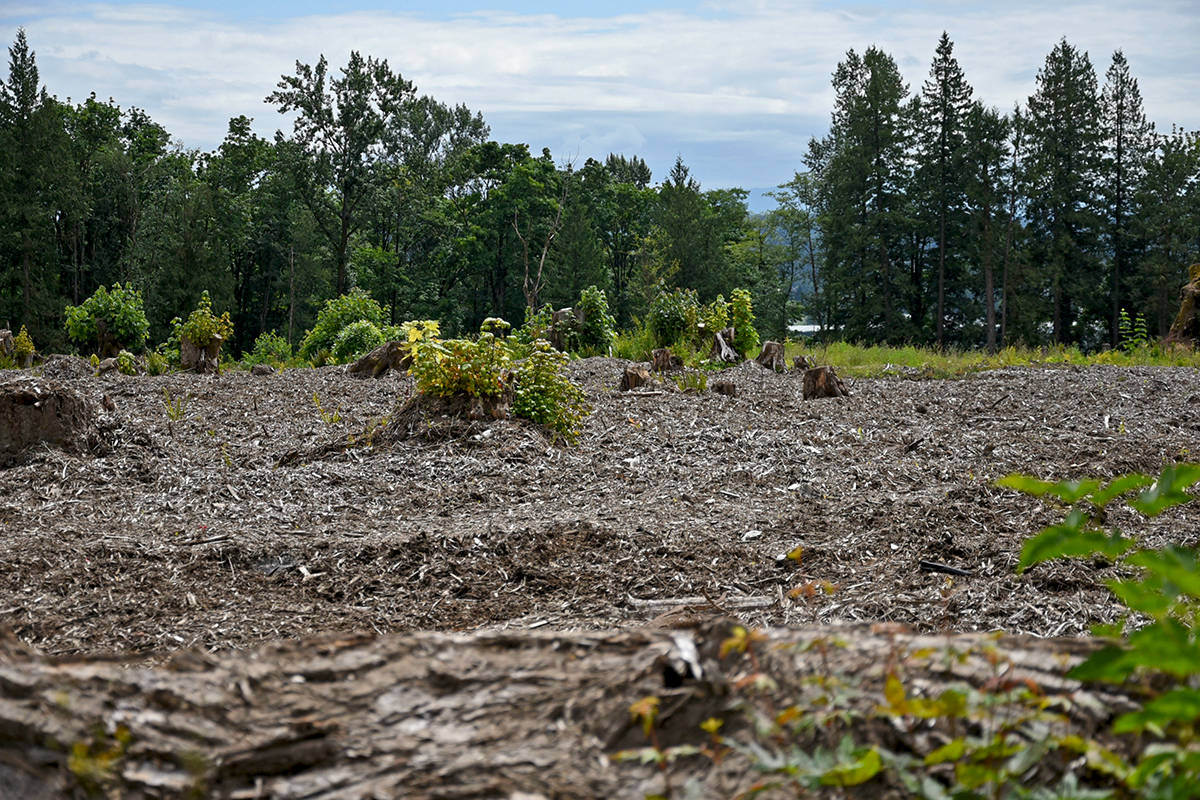 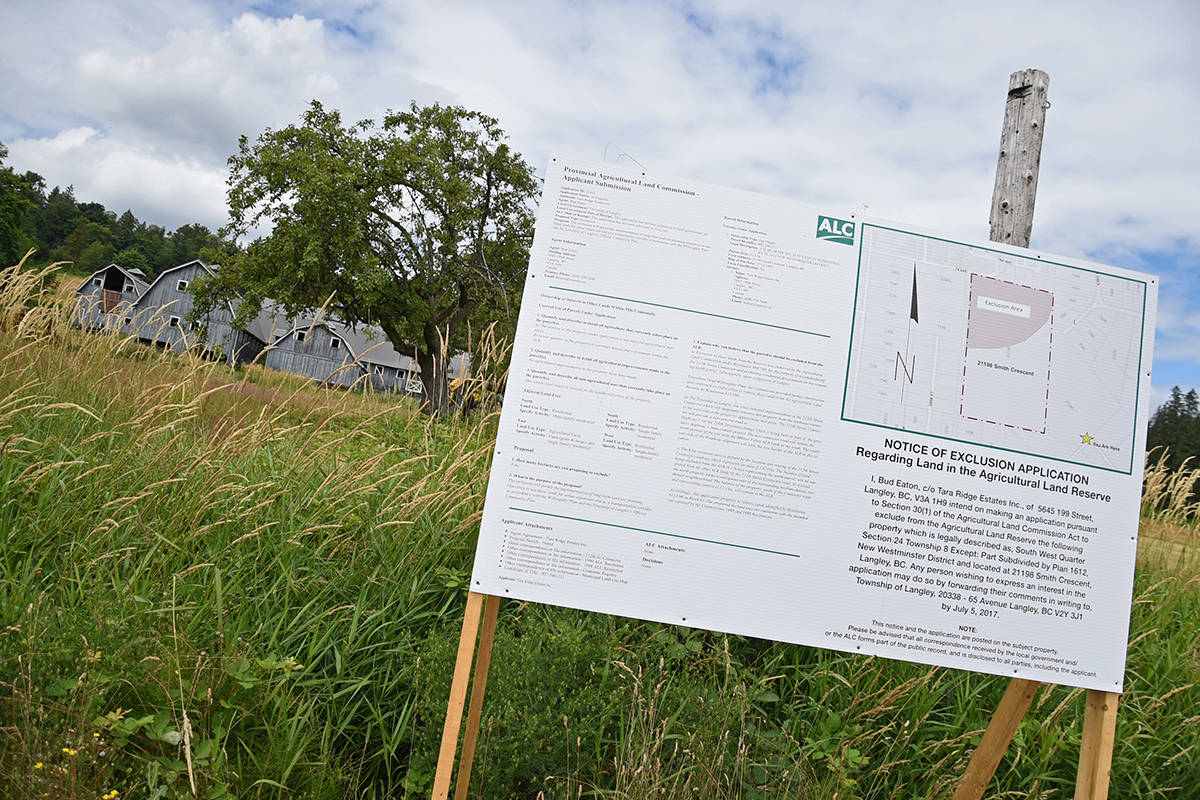