With construction already underway for the SkyTrain extension from Surrey through to Langley, the Township council had a few questions for the head of the project.

“The primary question we heard throughout was ‘When will it be in service?’” MacLean said.

The recent public engagement included detailed maps for the first time showing the public which side of the road the SkyTrain guideway will travel down, its exact route, including where it will transition from Fraser Highway to Industrial Avenue in Langley, and renderings of the planned local stations.

Township councillors were pleased to see the plan moving forward, but had some questions about how locals will be able to access the SkyTrain when it arrives in 2028.

“I think the Township of Langley, in my view, is quite different from most communities,” said Councillor Petrina Arnason.

She noted that vast portions of the Township are in the Agricultural Land Reserve (ALR) and people will likely be driving to the SkyTrain. Arnason wondered if there would be significant parking around any of the Langley stations.

MacLean said that while there is provision for a few hundred new parking spaces along the 16 km route, the plan is to expand bus service and use other modes of transportation, including more bike and pedestrian paths, to get people to the stations. The end goal is to get more people out of their cars.

Arnason suggested that in Langley, it might be possible to build a mixed-purpose structure that includes a parking structure on the bottom and housing on the top to increase parking near the new stations.

Coun. Blair Whitmarsh also asked about parking. He lives in Brookswood, where there is still relatively little transit service.

“Not many people are going to walk a mile and half to get on a bus to get to the Skytrain,” he said.

TransLink will be expanding bus routes as part of the run-up to the SkyTrain extension opening, said MacLean. Consultation on exact routes usually starts around two years in advance of a new SkyTrain route opening, so in Langley it should start in 2026.

Mayor Jack Froese pointed out that TransLink has also adopted a plan that calls for Bus Rapid Transit (BRT), which is bus routes with a dedicated lane for faster travel. Eventually, the BRT route is planned to run from Maple Ridge all the way across the Golden Ears Bridge and down 200th Street as far as Brookswood. 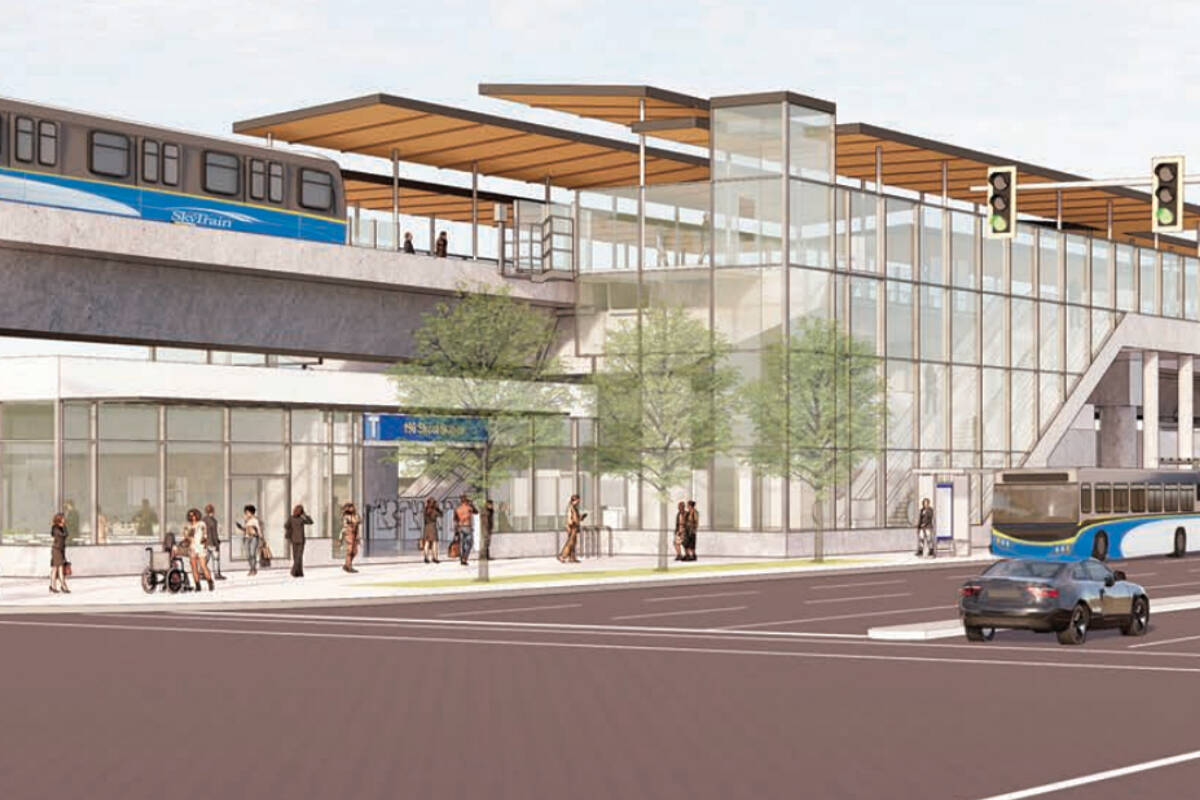 A conceptual drawing of a Langley Skytrain station at 196th Street. (Government of B.C.)