Several veterans took a conversion course at the Museum of Armed Forces in Aldergrove to refresh their know-how of armoured personnel carriers (APC) they will drive in the upcoming Remembrance Day parade.

All of them sported poppies above their hearts.

Aside from film shoots, the 2001 military vehicles were transferred to the museum from the Canadian military to help educate the public.

Three of the TLAVs will rumble down Aldergrove’s Fraser Highway on Nov. 11. One will be driven by 53-year-old veteran Bill Kidd.

Kidd, who lives locally, first served in the military in 1983 as an impressionable 17-year-old with the 15th Field Artillery Regiment based out of Vancouver.

“I was the first in my family to join,” he said. “After I joined my brother did,” and others in his extended family.

In 1985 Kidd was deployed in Germany for four years as a part of North Atlantic Treaty Organization (NATO) forces during the Cold War. NATO was facing off against a possible Soviet threat from behind the Iron Curtain in what was then the USSR.

By the mid-1950s, it is estimated that 10,000 Canadians were stationed in France and West Germany.

“We lost friends there,” Kidd recalled solemnly. “Some through vehicle accidents.”

Kidd, a retiree since 2005, decided to volunteer to do what he was so fond of during his time serving.

“Driving this reminded me of driving through the streets in Germany,” Kidd explained.

Like many soldiers, Kidd remustered to join the Royal Canadian Air Force as an aircraft mechanic for seven years, where he was deployed to the Afghanistan mission in 2003.

Another veteran in the group, troop sergeant 54-year-old Ian Smith witnessed the ravages of war on many of the soldiers who came back from his regular forces unit in Vancouver.

“We had two of our members seriously hurt in the space of two weeks. One of them almost didn’t come home,” Smith elaborated. “No one really came back the same.”

“The human brain is not meant to see half of the stuff [soliders] do see,” Smith added.

The crew took test runs of the TLAV over hills on a wooded property and down a small stretch of road on 262nd Street beside the museum.

“I used to drive this in the army,” Kostinuk said, explaining the metrics of its 400-horsepower Detroit distilled turbo-charged engine with a semi-automatic transmission.

The TLAV body is protected with “spall lining” made of kevlar, to prevent soldiers from being “shredded from the inside like cooked beef” when penetrated by bullets, Kostinuk said.

“We used to call this a battlefield taxi,” said a veteran sergeant from the Canadian Army who wished to remain unnamed.

It took troops to the heart of the battle and was used as an essential part of tactical formations to advance upon the enemy, the veteran explained.

The crew, and others, will suit up and march alongside the tracked vehicles starting at 10:40 a.m. on Nov. 11. 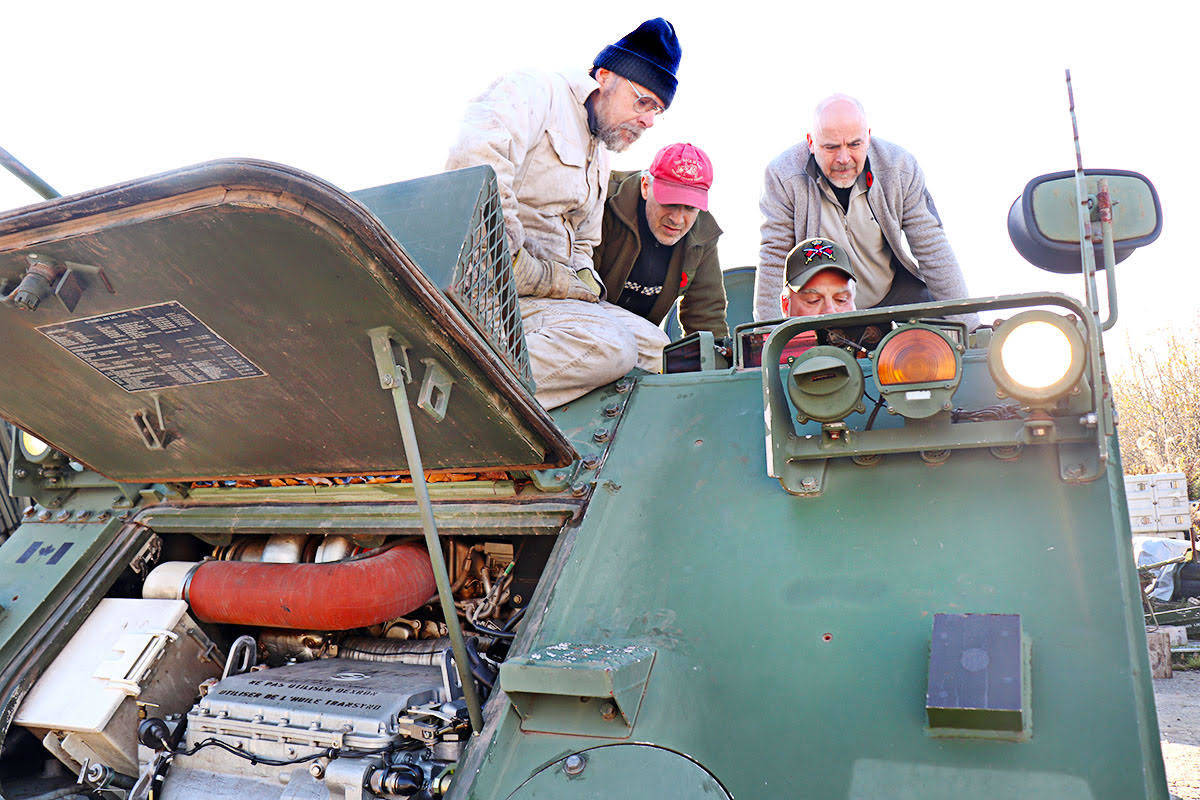 Veterans Michael DesMazes and Bill Kidd got together on Saturday morning for a refresher lesson from retired bombadier Darren Kostinuk on the tracked military vehicle they will drive in this year’s parade. (Sarah Grochowski photo) 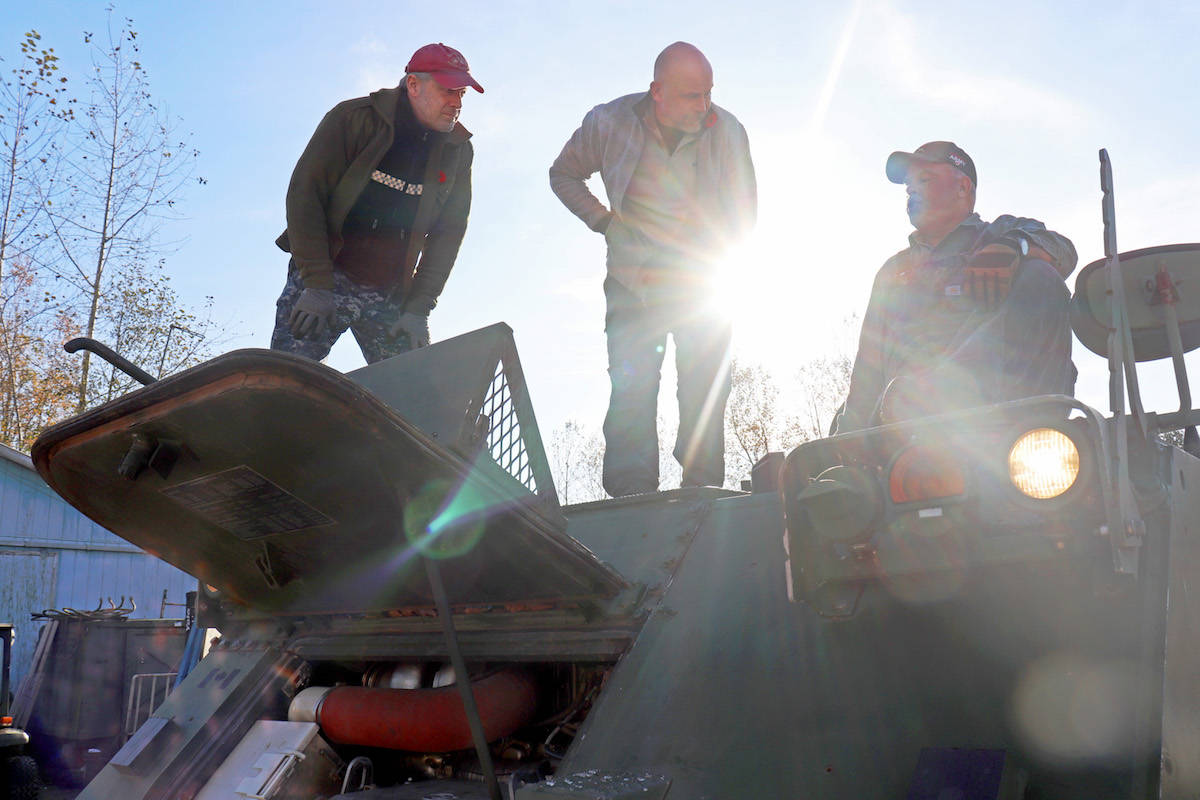 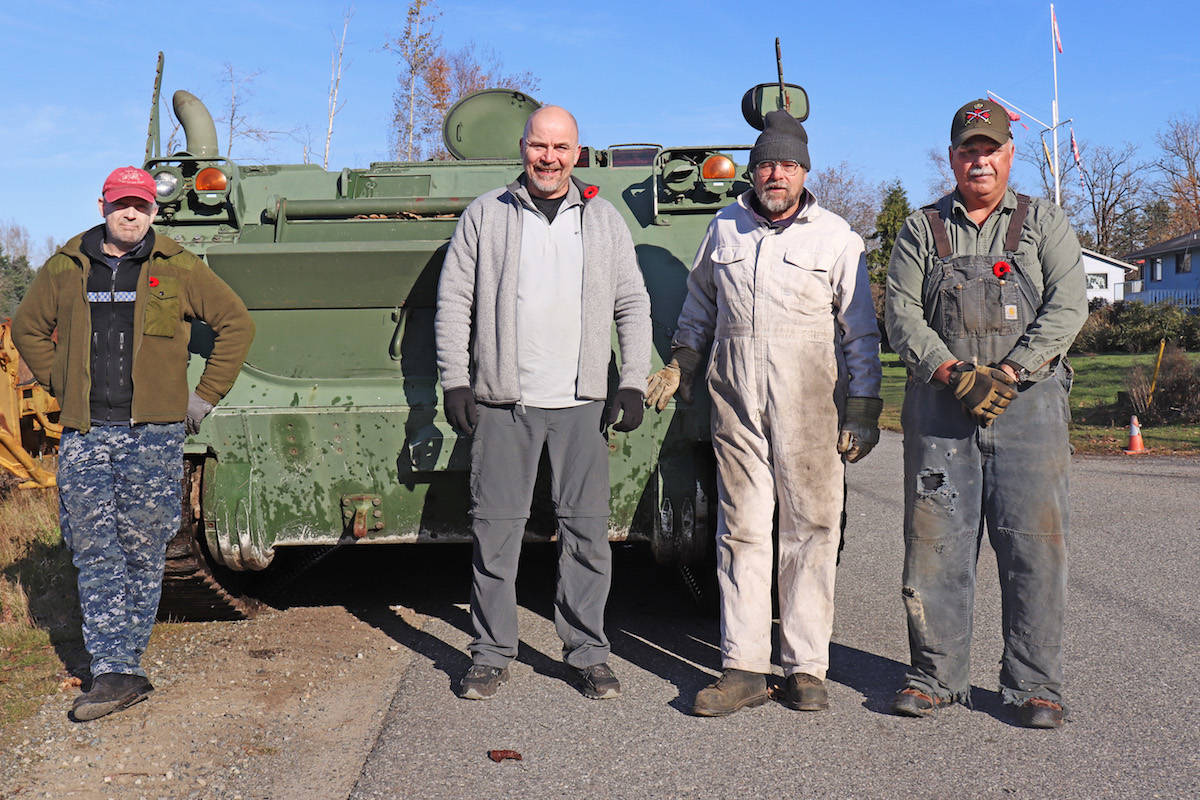