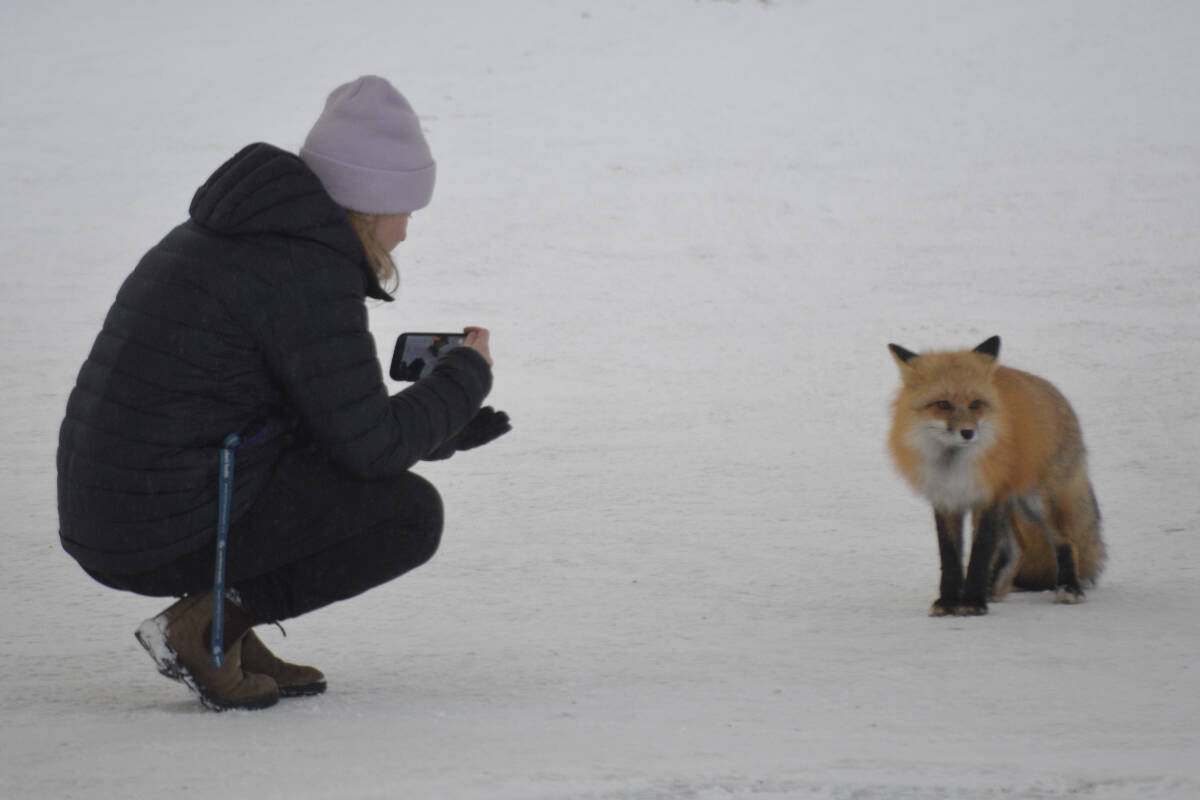 A person kneels down to grab a photo of the fox in downtown Quesnel on Tuesday, Dec. 28. (Rebecca Dyok photo) 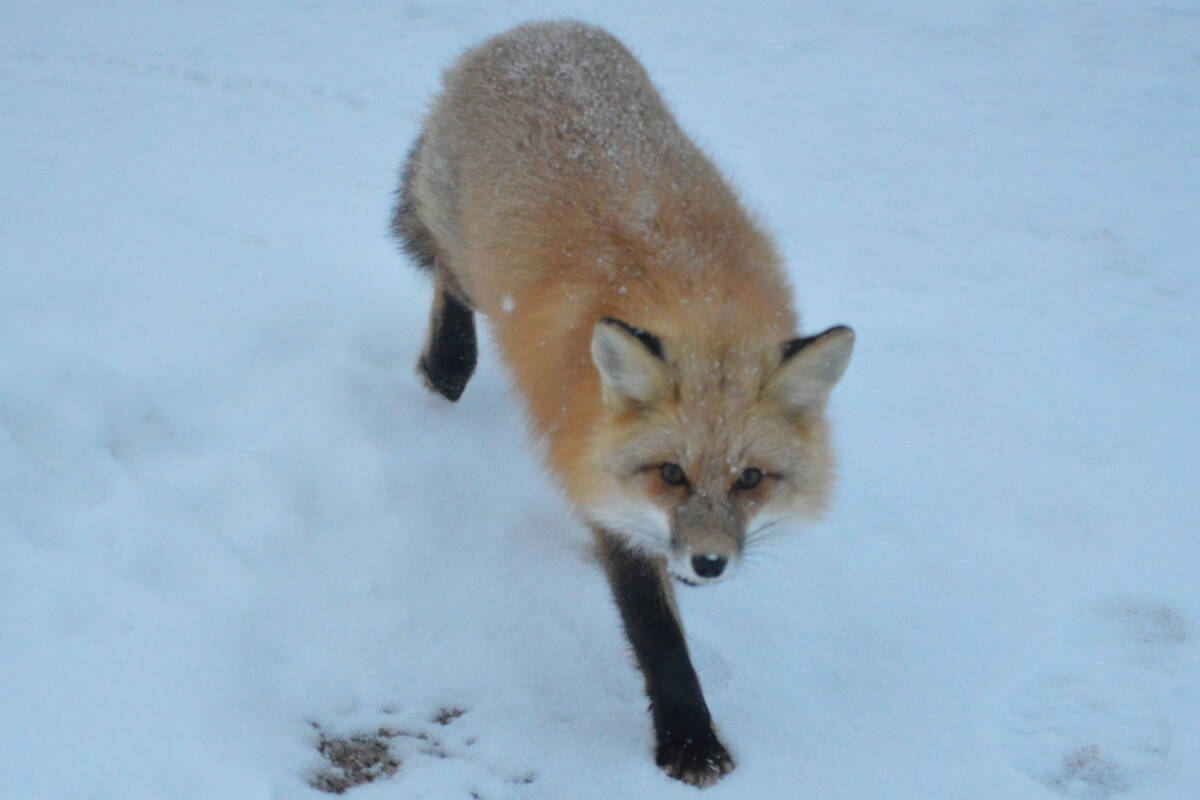 A red fox has become a familiar face in downtown Quesnel where convenience store staff have named them Jerry. (Rebecca Dyok photo) 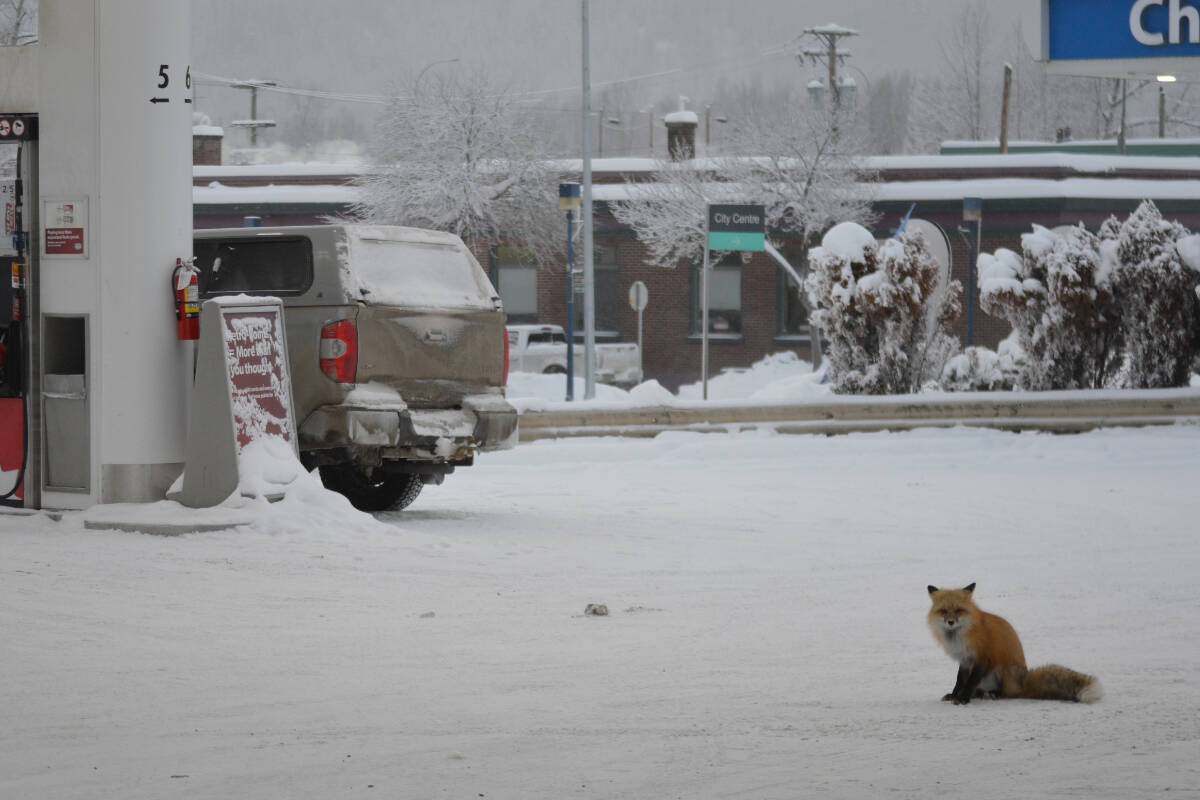 A red fox has reportedly been hanging out in downtown Quesnel since Friday, Dec. 24. (Rebecca Dyok photo)

A fox appears to have moved into downtown Quesnel where it has captured the attention of motorists and convenience store staff.

The relatively curious and healthy-looking fox has been wandering the area since Christmas Eve with its seemingly favourite rest stop at Petro-Canada on McLean Street.

As motorists filled their gas tank some could not contain their surprise as they stared just a few feet in front of the medium-sized bushy-tailed omnivore and quickly reached for their phone to take videos or photos.

Inside, customers could be heard Tuesday, Dec. 28, remarking about the fox who staff have named Jerry.

Because the fox has kept returning, it is likely being fed, which staff said they do not want people doing.

To help protect foxes and avoid conflicts, the BC SPCA said it is important to never feed them.

“Foxes are naturally wary of people, and will ignore or avoid people most of the time,” stated the non-profit animal welfare organization.

“However, foxes may become habituated to people if they are repeatedly attracted to scraps from garbage, compost and pet food, or if people intentionally feed them.”

The Conservation Officer Service has been notified of the fox, but it is unclear if any action will be taken.

A convenience store employee said because there is concern the fox could end up being euthanized, they have reached out to Second Chance Wildlife Rescue in Quesnel.

Owner Tammy Zacharias said her phone has been blowing up with photos and calls of the fox, that is believed to be two years old, since Christmas.

She recalled while some had lived near the seniors’ home in 100 Mile House, this is a first.

“He is healthy—that’s apparent from the pictures that we’re getting of him but people love wildlife and people like even to get pictures with them and that’s the sad part,” she said.

Second Chance Wildlife would like to trap and remove the fox before it becomes further ‘imprinted,’ meaning their natural fear of humans is lost, potentially resulting in human-wildlife conflict with undesirable consequences.

However, Zacharias said catching a fox is extremely tricky as they are pretty intelligent animals. It is believed the fox shuffles between downtown and a log yard where they also feed.

“Just look at him and walk away,” Zacharias said, urging people not to feed wildlife and to avoid taking pictures as the flash and noise can startle any animal within range.

Read More: Quesnel woman gets spooked, licked by bear in her backyard