The third consultation held by the Langley School District in regards to a middle school at D.W. Poppy High School was a night full of growing fears and tears.

District assistant superintendent Woody Bradford and communications manager Joanne Abshire hosted the meeting on the night of Oct. 10, which drew numbers over 200, many in support of the North Otter-area school wore red.

Abshire said that hundreds have already taken the district’s online survey, as one of three options available to have their opinions considered – as well as an online survey or email to feedback@sd35.bc.ca.

Lineups from the gym led to the school’s front entrance outside. Once inside, dozens sat on bleachers for a lack of table space.

At the beginning of the month, Grade 12 student Celeste Collie made signs to inform and encourage other D.W. Poppy students to don red to the meeting and “show your pride.”

Students Jake Beka and Cai MacCarthy helped Collie plaster the message all over the school’s hallways.

“We know each other and many of us in different grades hang out,” said Collie, who also serves on the school’s grad council. Parents, teachers and students heard the news and sported red on Wednesday.

A Grade 11 student John Barrett, followed in suit with the design of an independent, “unbiased survey,” regarding middle school options for the area.

“One of the questions asks you what you are most excited about – there is no other way to give your opinion.”

Barrett’s online questionnaire asks survey-takers to identify their community and what they prefer to see happen to the high school.

“I’ve been given a lot of opportunity here that I wouldn’t necessarily have been given at other schools. We just bought a $60,000 laser cutter and I was entrusted in working through that system,” Barrett said, in relation to the school’s annual car show.

Grade 12 student Cai MacCarthy – one of 130 students from Aldergrove who attend D.W. Poppy – said there is a lot that students stand to lose if Poppy is converted into a middle school, as option three outlines. Among them school-specific scholarships, extra-curricular activities, and a strong sense of community, MacCarthy and Beka agreed.

“It’s band tours, plays and sideshows that we don’t know if we’re going to have anymore,” MacCarthy added.

Beka, a Grade 11 student, is just as involved in extra-curricular activities, with the same time spent in clubs as his regular classes.

“This school is who I am,” Beka emphasized. “I’ve made all of these connections with students and teachers and I’m afraid to lose that.”

“It gets me up in the morning,” MacCarthy added.

The students agreed that option two is the best alternative for a middle school, where Grades 6 and 7 are added to the campus.

“We generally don’t talk to them much,” MacCarthy said. “It would be the same sort of age gap if the middle school kids came here.”

“We see Grade 6s and 7s on the bus already,” on their way to school, Collie added.

D.W. Poppy principal Dean Pacheco – also a member of the transition committee who consulted over middle school options – said both middle school and high school cohorts would have separate lunch and bus schedules.

“These numbers wouldn’t require portables on campus,” Beka asserted. In his Advanced Placement English class, students are writing letters to the school district, sharing their thoughts.

Madeline, a Grade 11 student, found it difficult to maintain her composure during the group feedback portion of the meeting. Especially after a friend showed her a musical theatre group picture from four years ago.

“This is beyond horrifying,” she said with tears in her eyes.

“I’d be graduating with strangers next year.”

Students from the musical theatre club, now in Grades 11 and 12, hugged in the foyer.

Input gathered from Wednesday’s meeting and subsequent consultations – the next on Oct. 16 at Fort Langley Elementary at 6 p.m. – will be presented to the school board at its regular meeting in December.

A decision made by the board will be implemented over a span of one to three years. 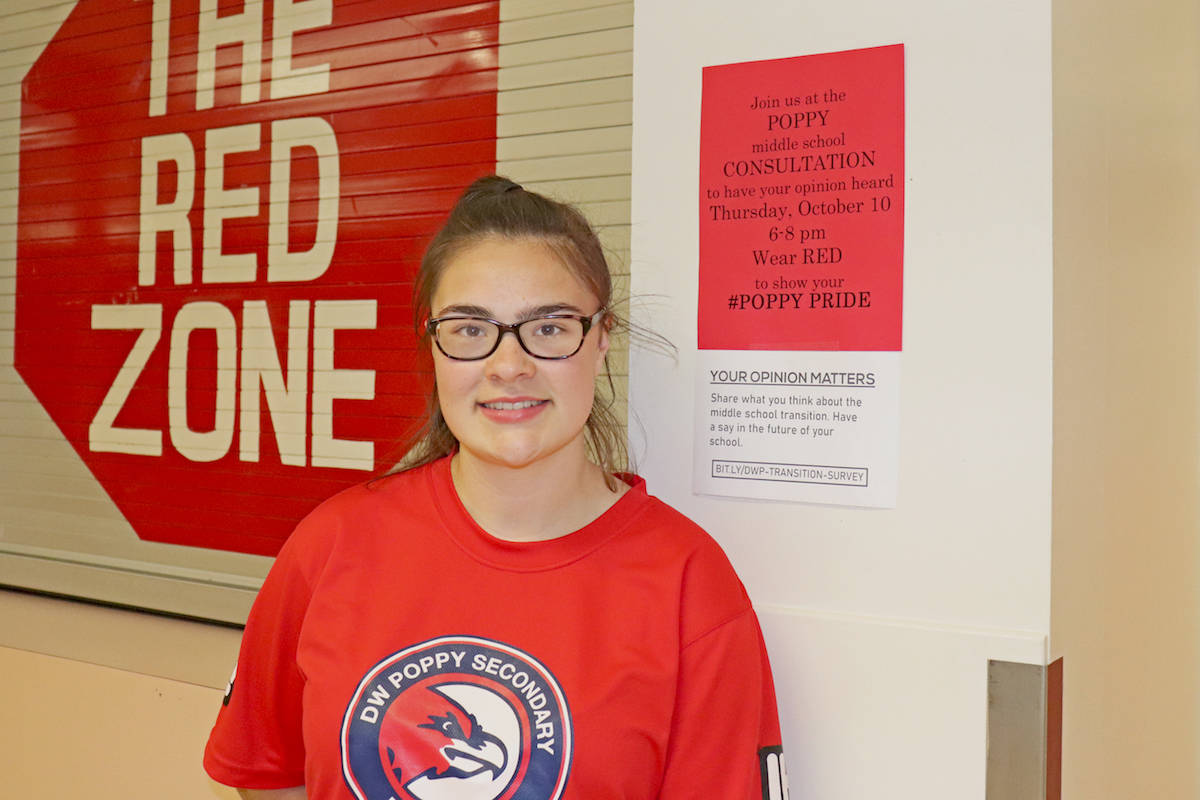 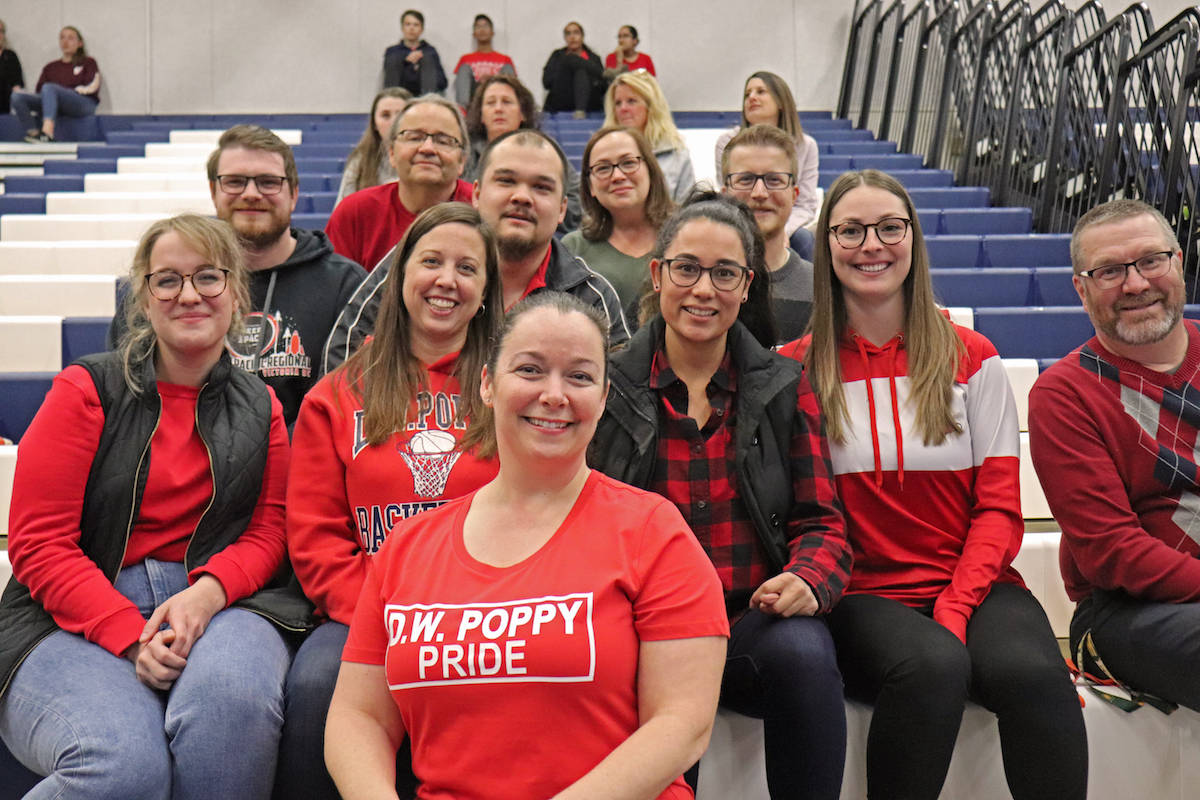 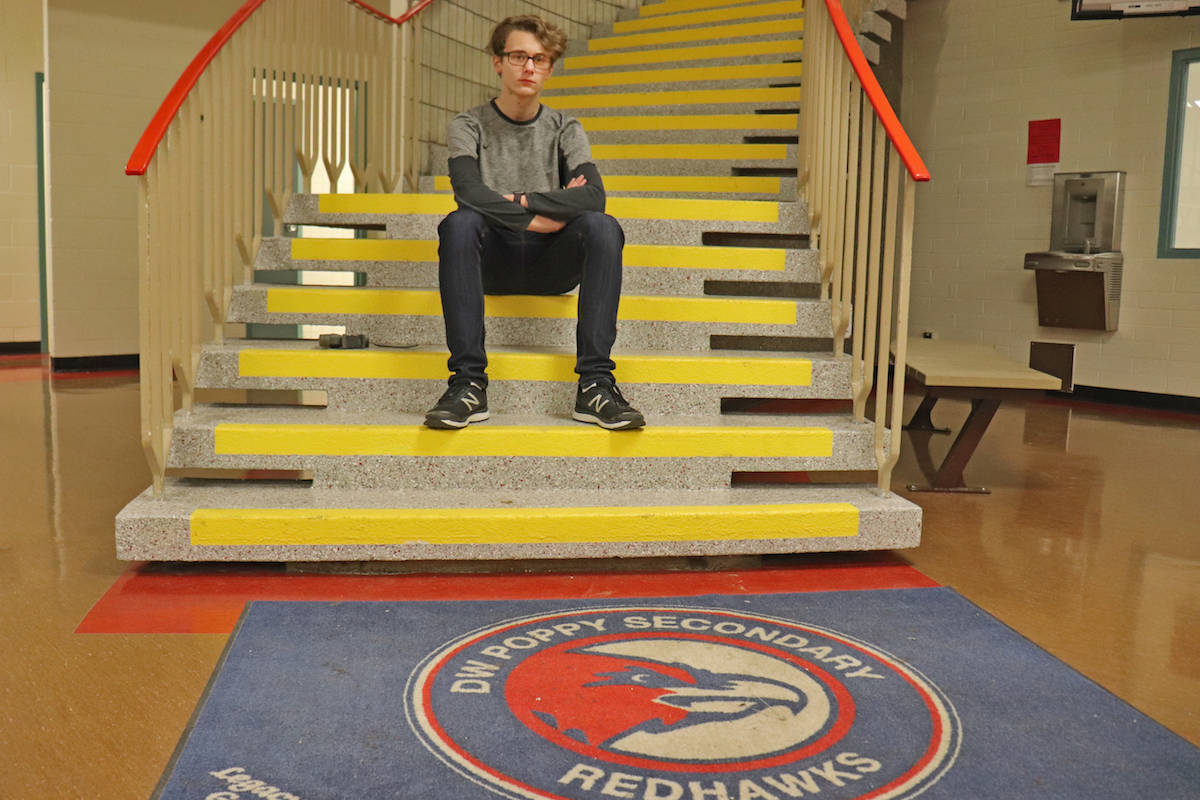 A Grade 11 student John Barrett, followed in suit with the design of an independent, “unbiased survey,” regarding middle school options for the area. (Sarah Grochowski photo)

After losing two baby boys, B.C. parents hope to cut through the taboo of infant death