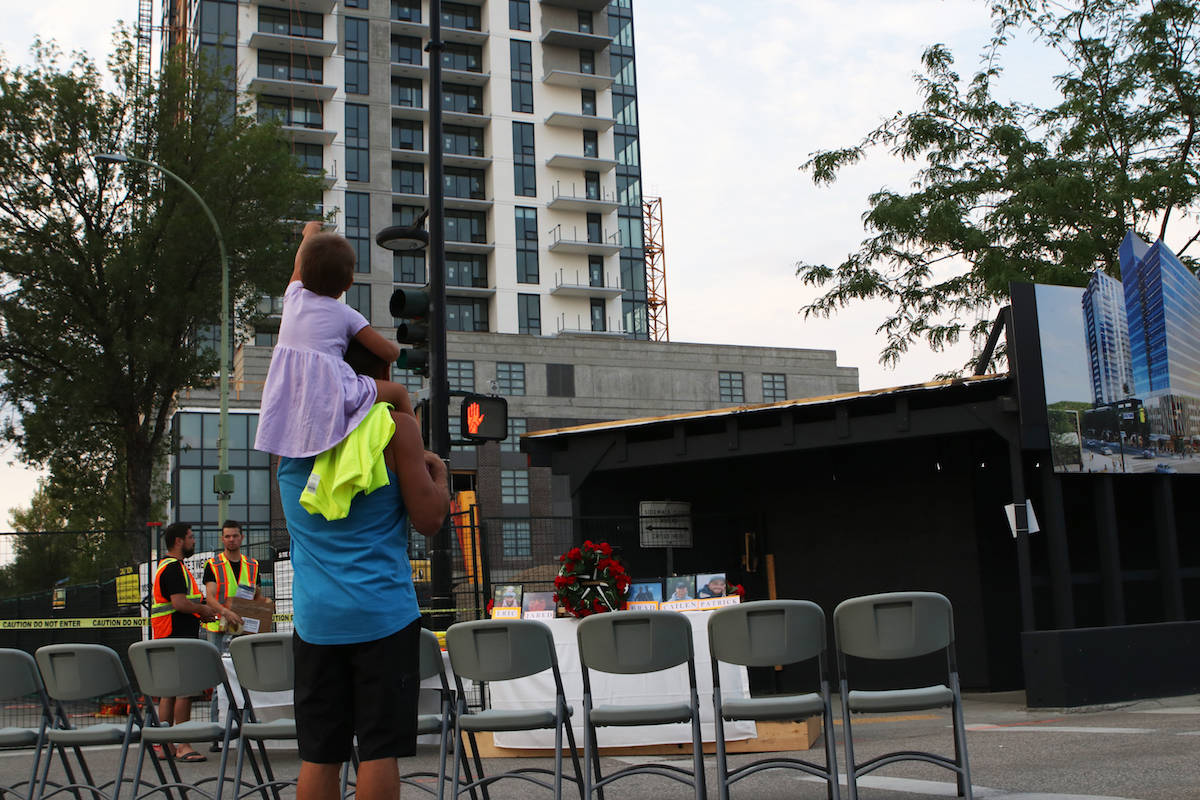 The site of the vigil, prior to its commencement. (Aaron Hemens/Capital News) 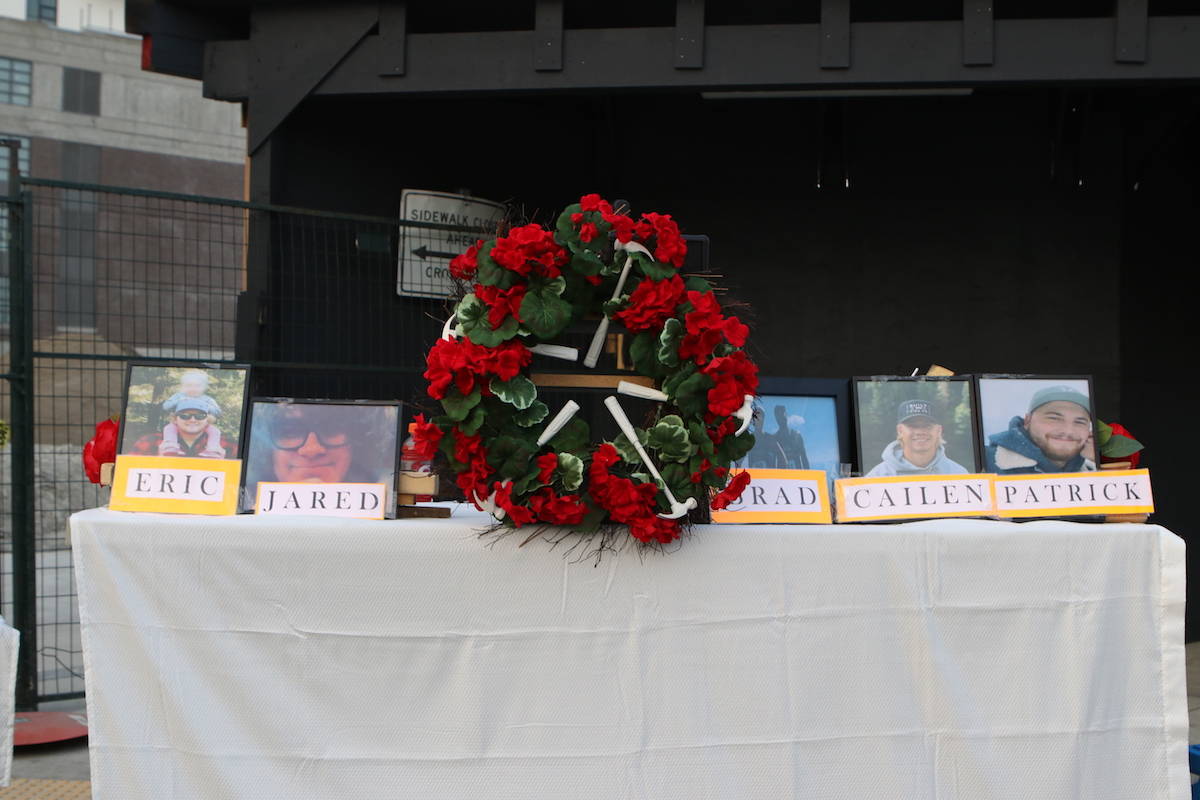 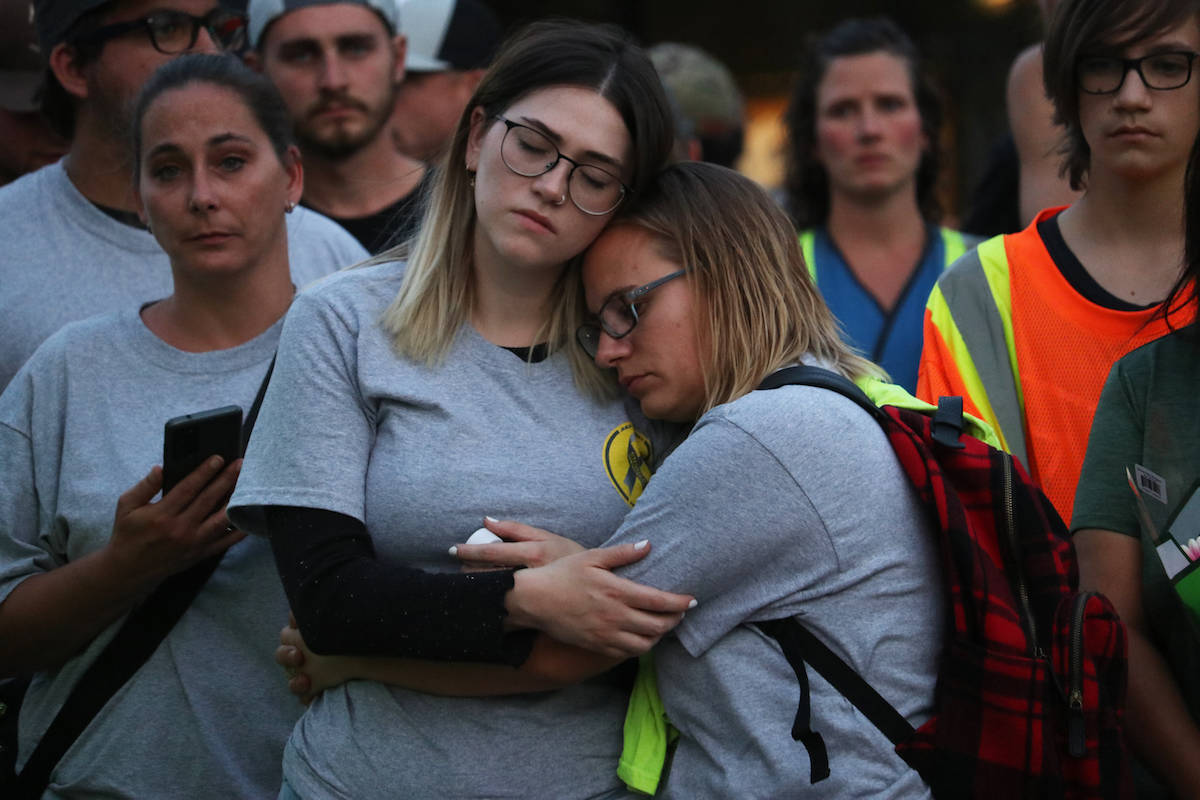 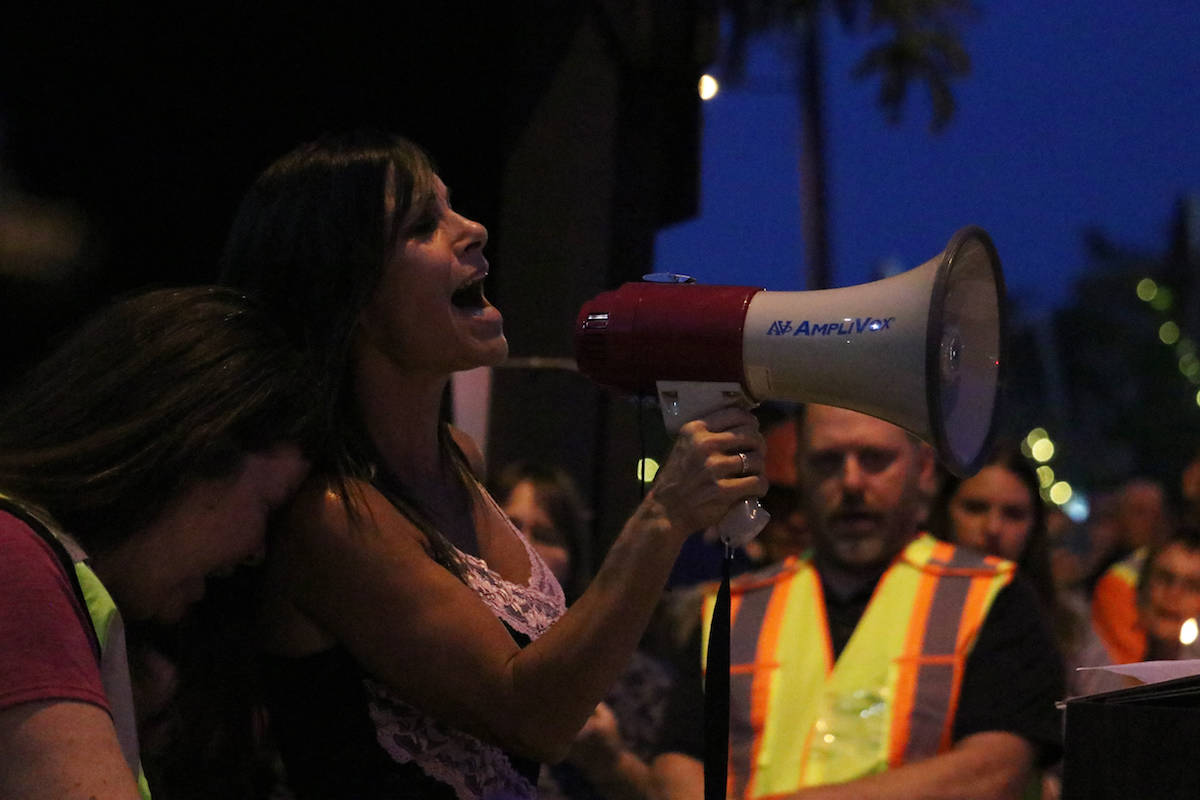 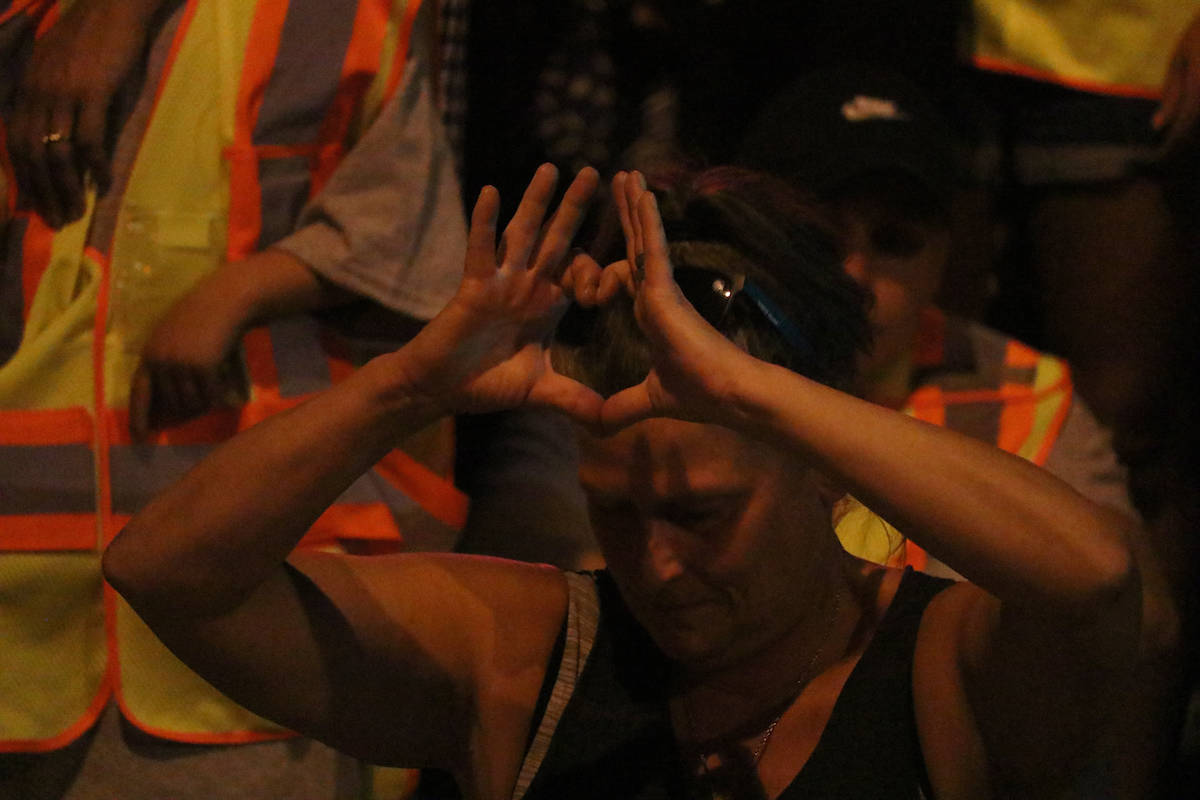 An attendant makes a heart shape with their hands. (Aaron Hemens/Capital News) 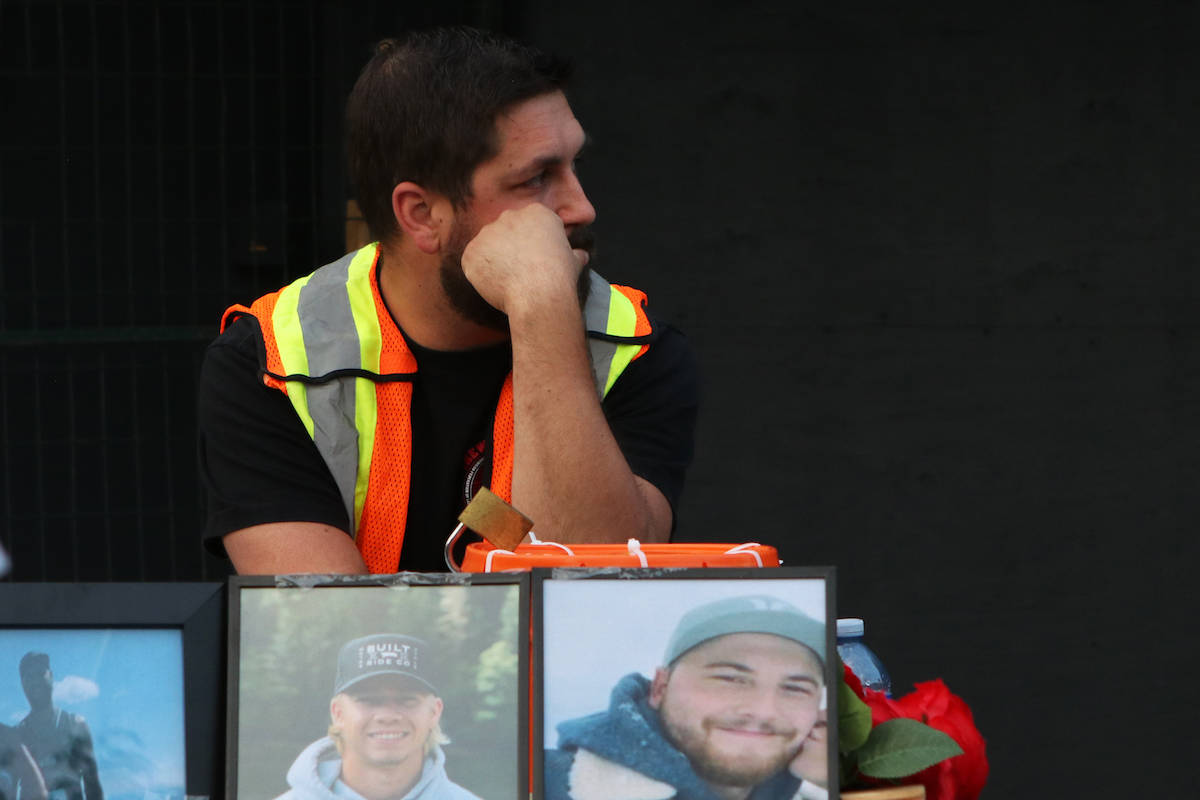 A member of the North Okanagan Labour Council pauses during the vigil. (Aaron Hemens/Capital News) 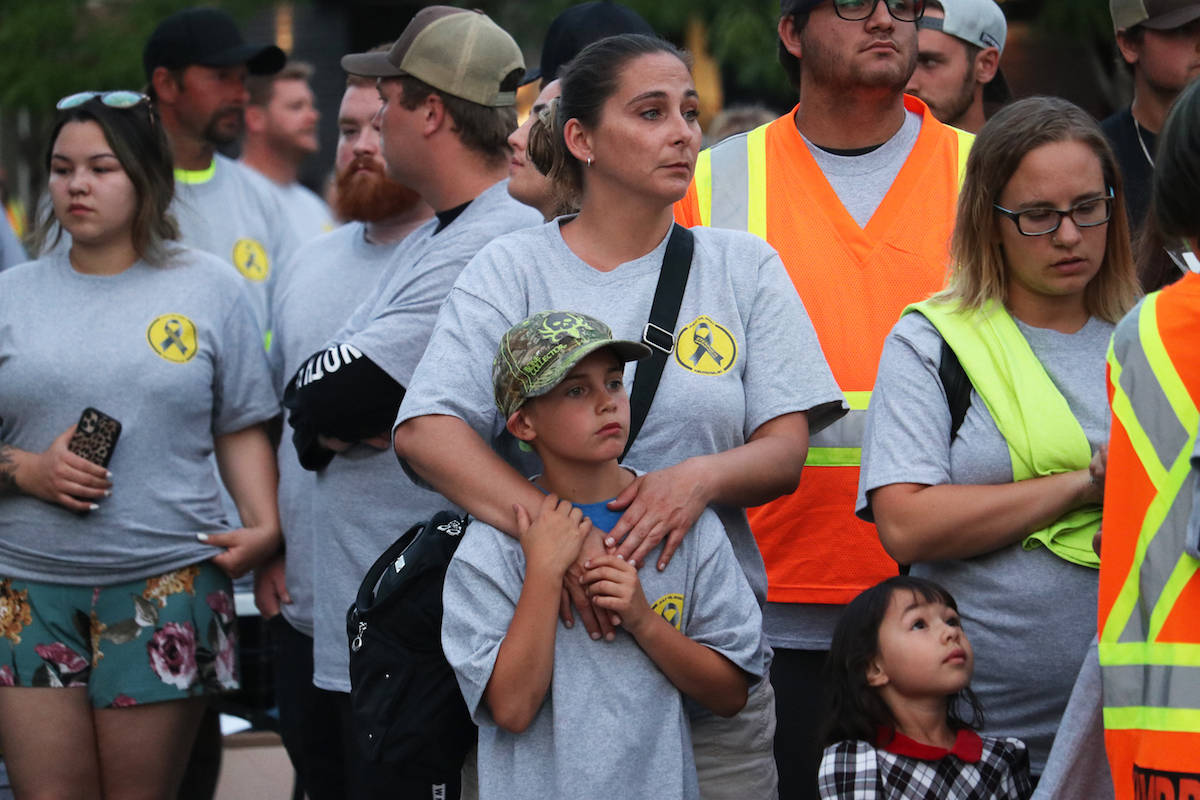 Hundreds of people of all ages and backgrounds were in attendence. (Aaron Hemens/Capital News) 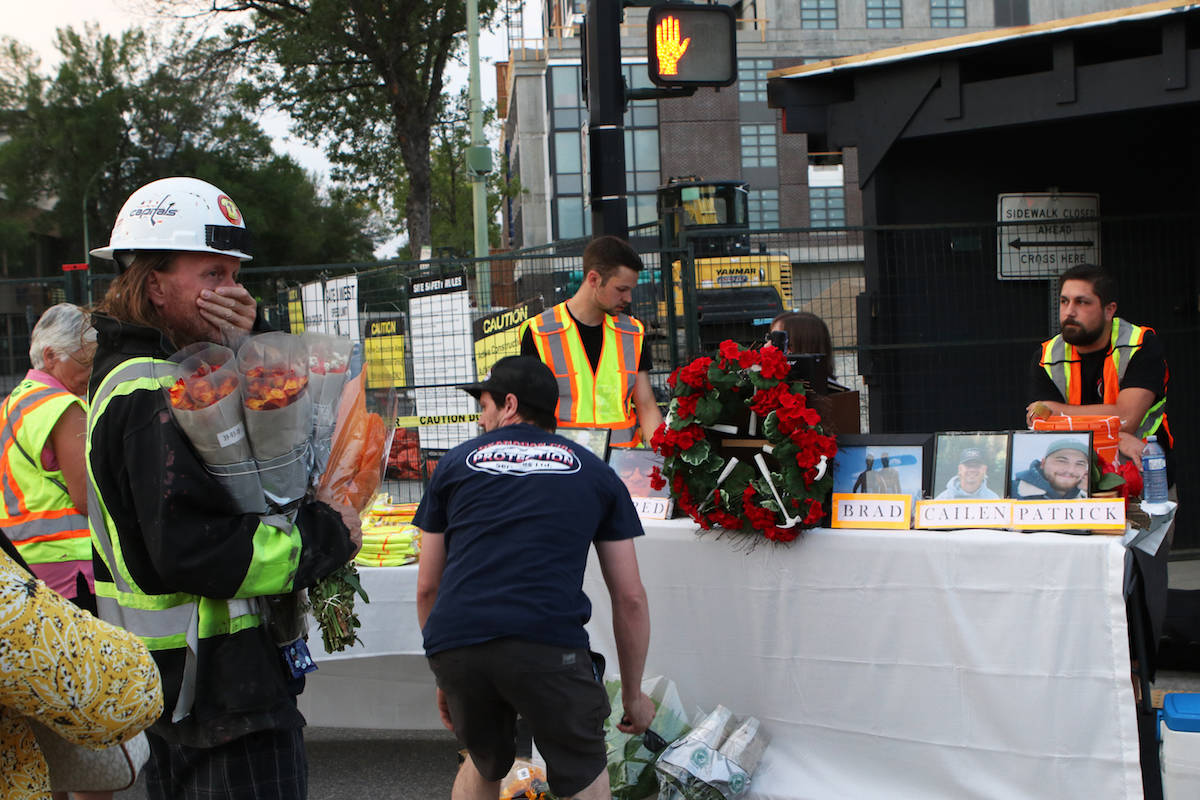 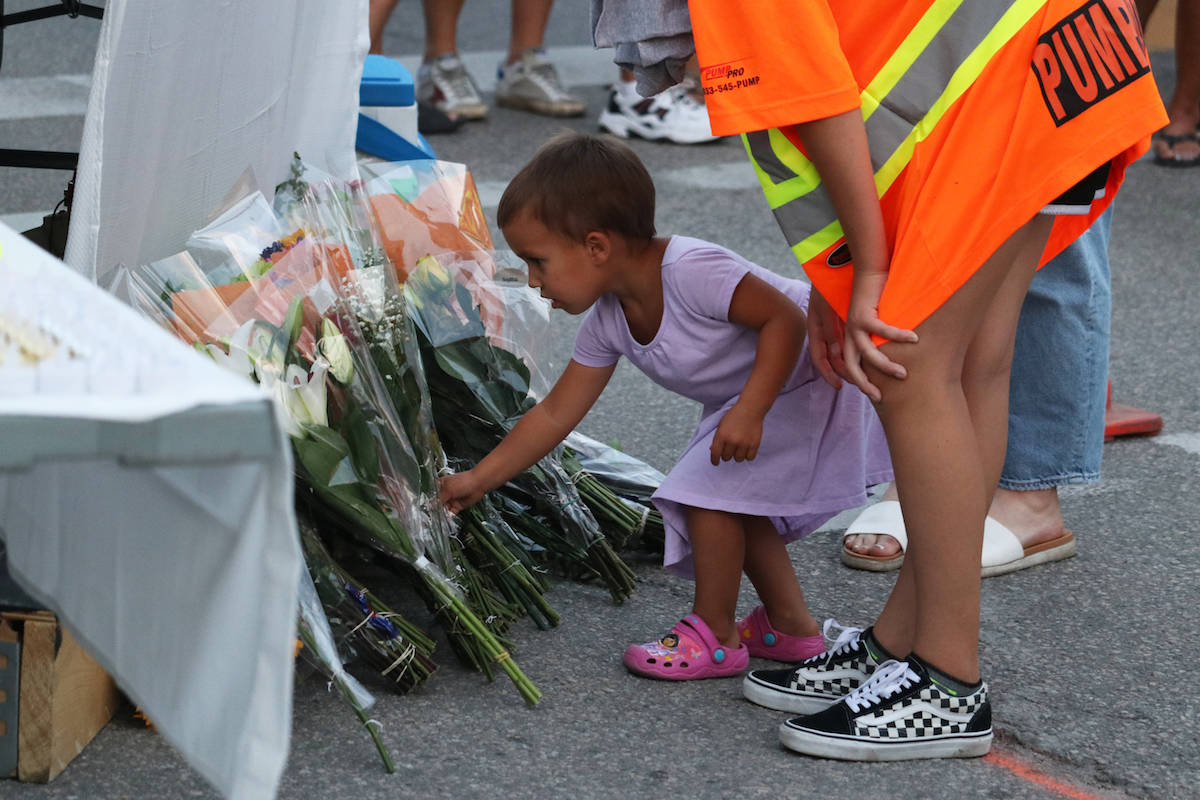 A youth leaves a bouquet of flowers at the vigil site. (Aaron Hemens/Capital News) 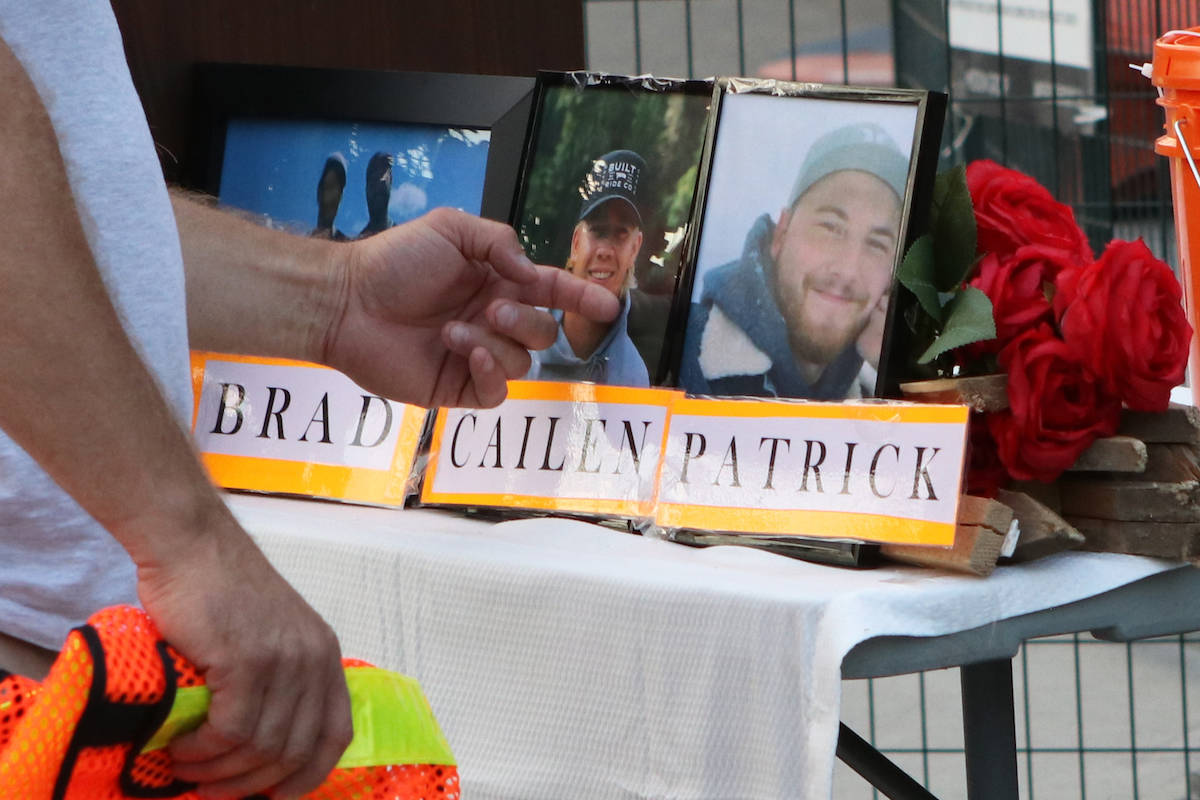 Chris Vilness, the father of 23-year-old Cailen Vilness, brushes a photo of his son at the vigil site. (Aaron Hemens/Capital News)

Friends and family members of the five men who died when a crane collapsed in downtown Kelowna on Monday (July 12) were joined by hundreds of people for a vigil that was hosted Friday evening near the site of the collapse.

In addition to kin and loved ones, city council members, colleagues, tradesmen and everyday residents took to the podium at the intersection of St. Paul Street and Bernard Avenue to honour and pay their respects to Cailen Vilness, Jared Zook, Brad Zawislak, and brothers Eric and Patrick Stemmer.

All five died after a crane that was being dismantled collapsed at the construction site of the Brooklyn building on Bernard Avenue Monday morning.

READ MORE: Here’s what we know about the five men killed in Kelowna crane collapse

“There are no words. There are no sequence of phrases, combinations of syllables, nothing that anybody can say or I can say to make this blow lighter for any of us,” said Kelly Hutchinson, the vice-president of the North Okanagan Labour Council, the group who organized the vigil.

“But we’re here today for them, for ourselves, for each other. Whether you recognize it or not, every day, we have each other to lean on for support.”

Safety vests, candles and tribute t-shirts were distributed to members of the crowd. Many in attendance wore their own safety vests and t-shirts to the vigil.

Kelowna city councillor Loyal Wooldridge, who was joined by councillor Mohini Singh, said that the vigil demonstrates the strength and resilience of the community.

“We’ve seen a difficult 18 months — and I’m not just talking about our pandemic — but our community has seen its fair share of tragedy. We stand together in solidarity and healing, and tonight, remembrance of the men killed in this terrible tragedy,” said Wooldridge. “Everyone deserves the right to a safe workplace. Everyone deserves to know their loved ones will return home safely at the end of the day.”

During the vigil, a two-minute moment of silence was held for the men. At one point, the crowd sang Amazing Grace together.

Vilness’s mother, Danielle, said that she’s been blown away by the support.

“Thank you for coming out and lighting a candle for my son. It’s been a really hard couple of days, and I don’t know what I would’ve done without the support of my crew back there,” she said.

She shared a quote by Vivian Greene, one that she said has been giving her a sense of peace and strength; “Life isn’t about waiting for the storm to pass, but learning to dance in the rain.”

“My son had a heart of gold. I tried to instil that virtue in him,” said Danielle.

“No matter what the storm in our life, if we could just look or try to look into the goodness into each and every one of the people that are around you, if you could just look at the little things, your life is going to be so, so much better.”