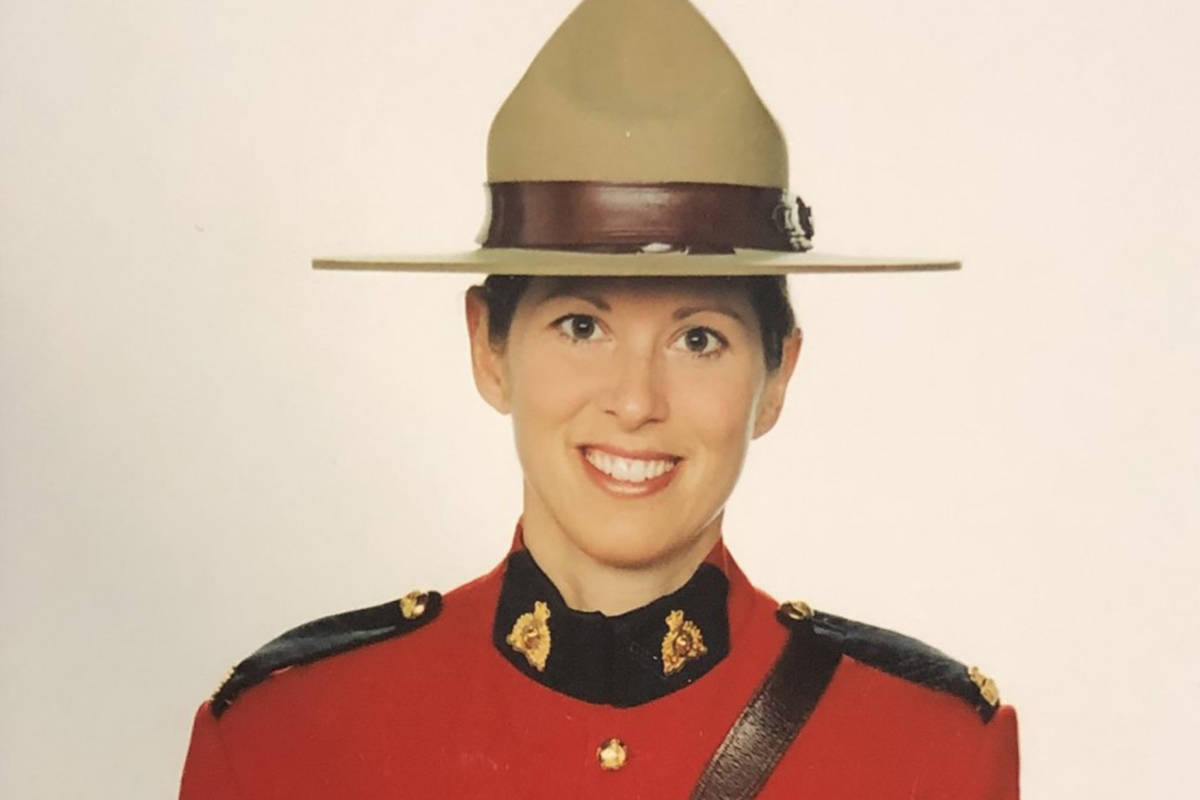 RCMP Const. Heidi Stevenson is shown in an RCMP handout photo. There is an outpouring of grief across Nova Scotia today as the names of victims of a weekend mass killing begin to emerge, ranging from a nurse to a teacher to an RCMP officer. THE CANADIAN PRESS/HO-RCMP MANDATORY CREDIT 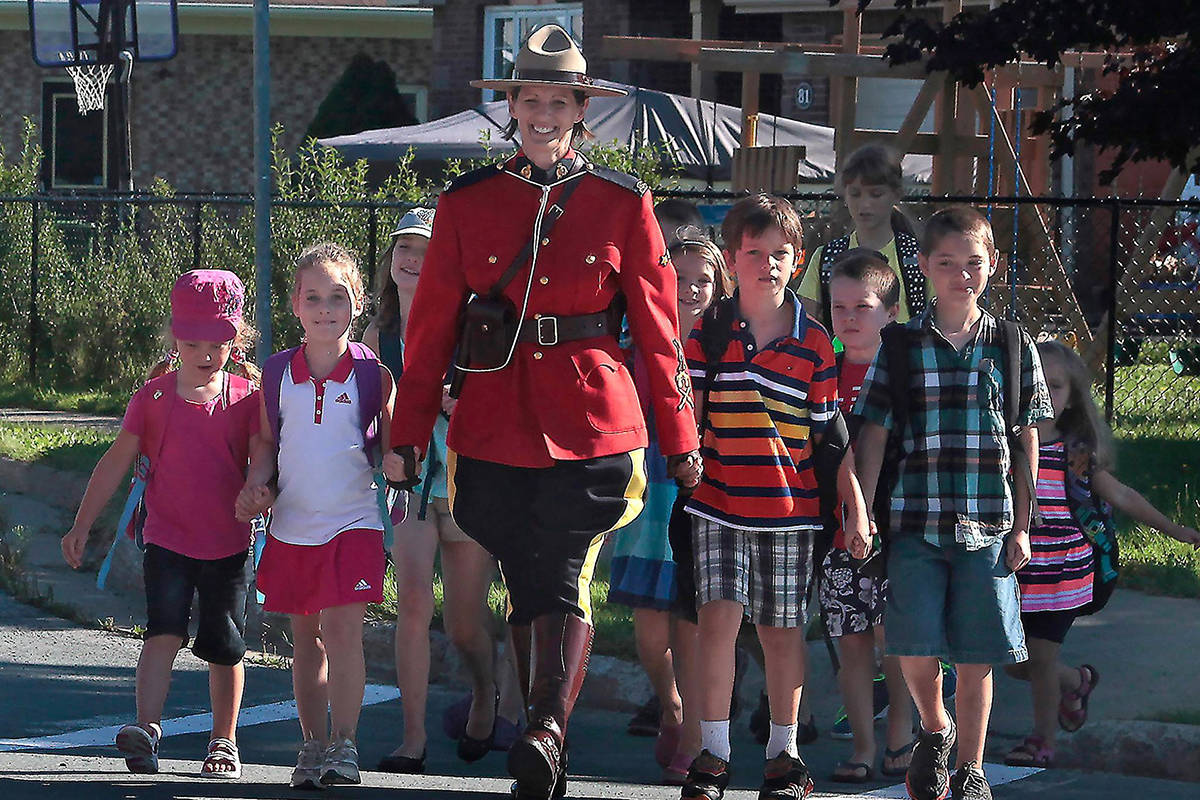 This is an undated handout photo of RCMP Const. Heidi Stevenson. There is an outpouring of grief across Nova Scotia today as the names of victims of a weekend mass killing begin to emerge, ranging from a nurse to a teacher to RCMP officer Heidi Stevenson.THE CANADIAN PRESS/HO-RCMP Mandatory Credit 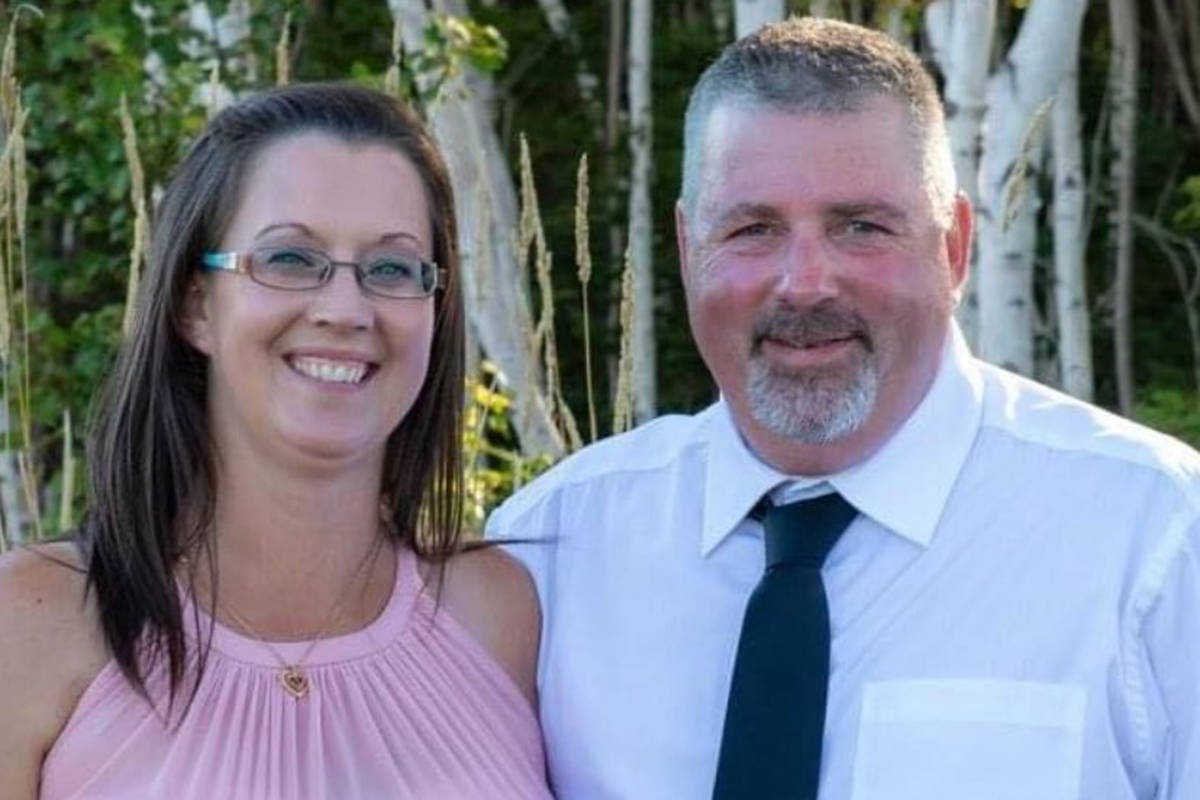 Jamie Blair (left) and Greg Blair are shown in a family handout photo. They are among the victims of the killing spree in Nova Scotia this past weekend. THE CANADIAN PRESS/HO-Kelly Blair MANDATORY CREDIT 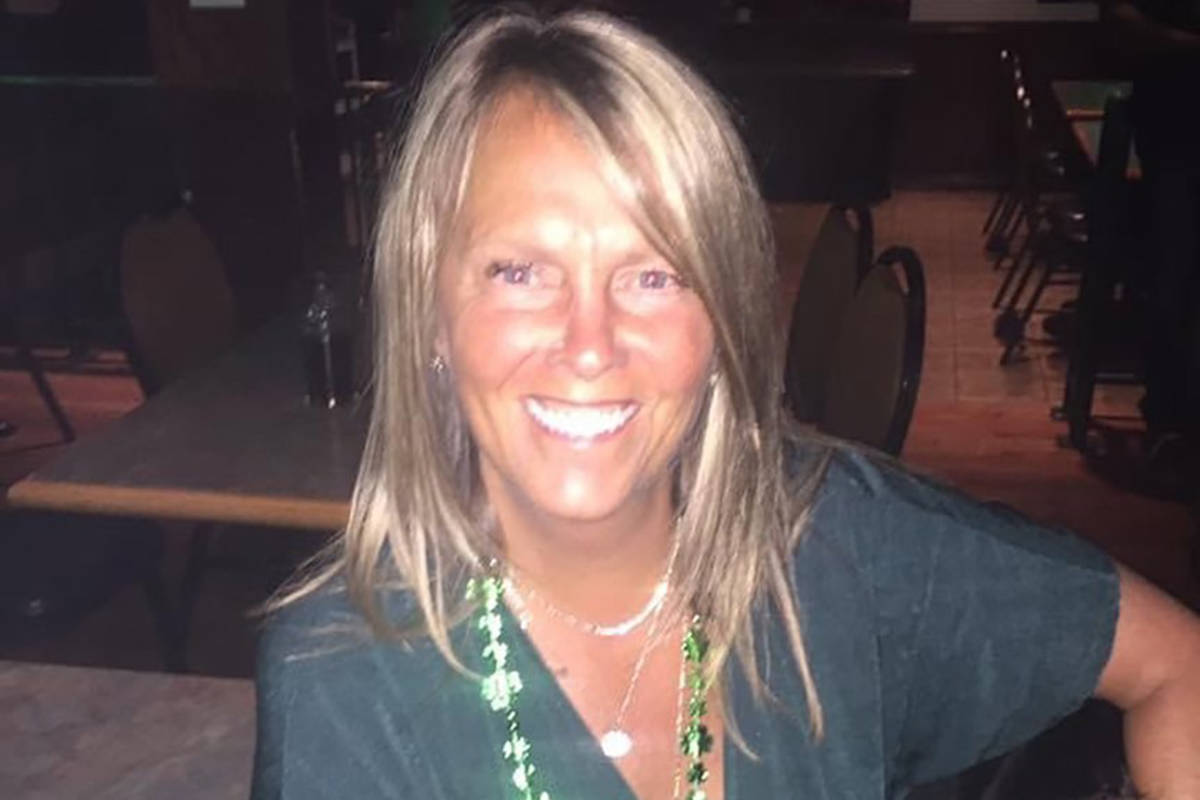 Gina Goulet is shown in a family handout photo. She was among the victims in the mass killings in Nova Scotia this past weekend. THE CANADIAN PRESS/HO-Annette Fisher MANDATORY CREDIT 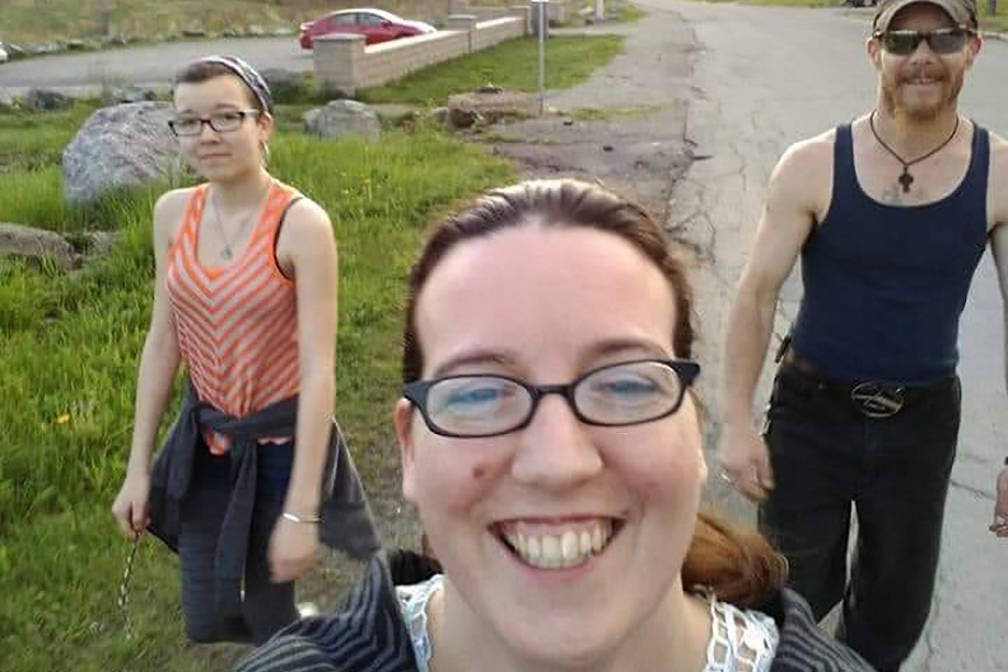 Emily Tuck (left to right), Jolene Oliver and Aaron Tuck are shown in a family handout photo. The family from Portapique, N.S. were among the victims of the mass killing in Nova Scotia this past weekend. THE CANADIAN PRESS/HO-Tammy Oliver-McCurdie MANDATORY CREDIT 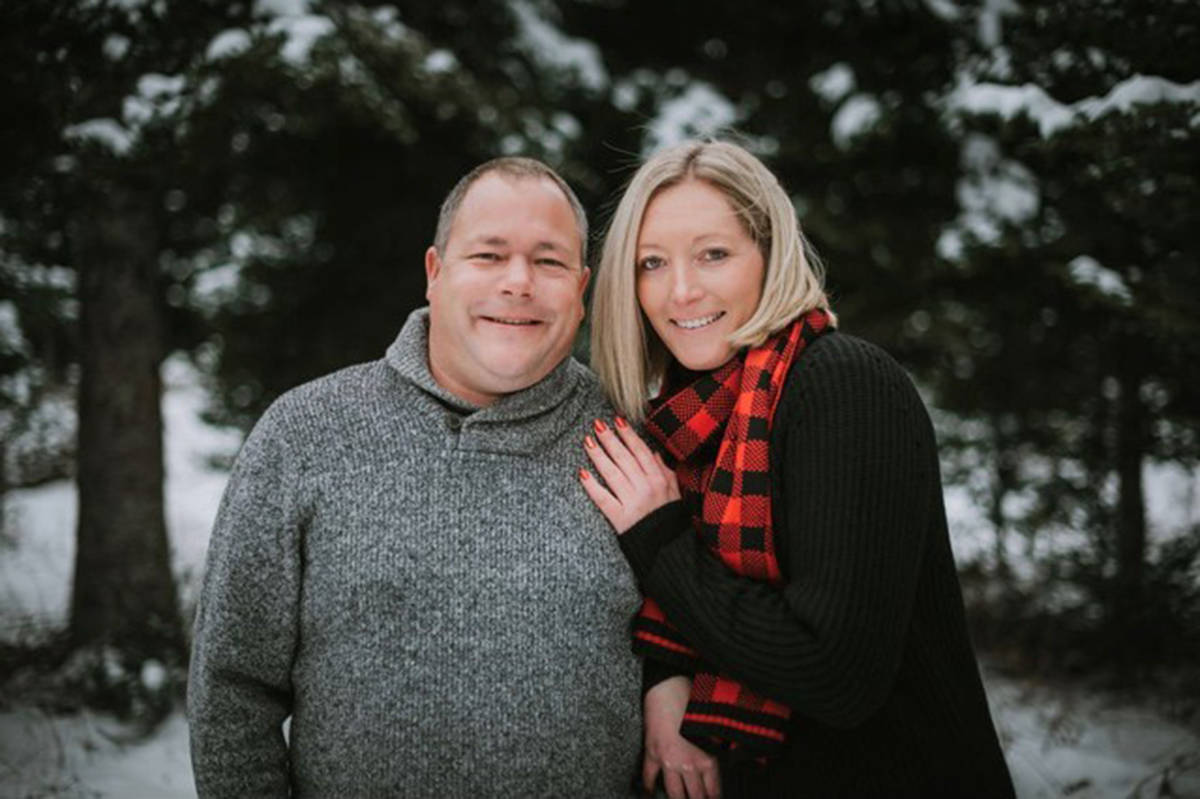 Correctional officers Sean McLeod and Alanna Jenkins are shown in a family handout photo. The couple is among the victims of the mass killing in Nova Scotia this past weekend. THE CANADIAN PRESS/HO-Taylor McLeod MANDATORY CREDIT 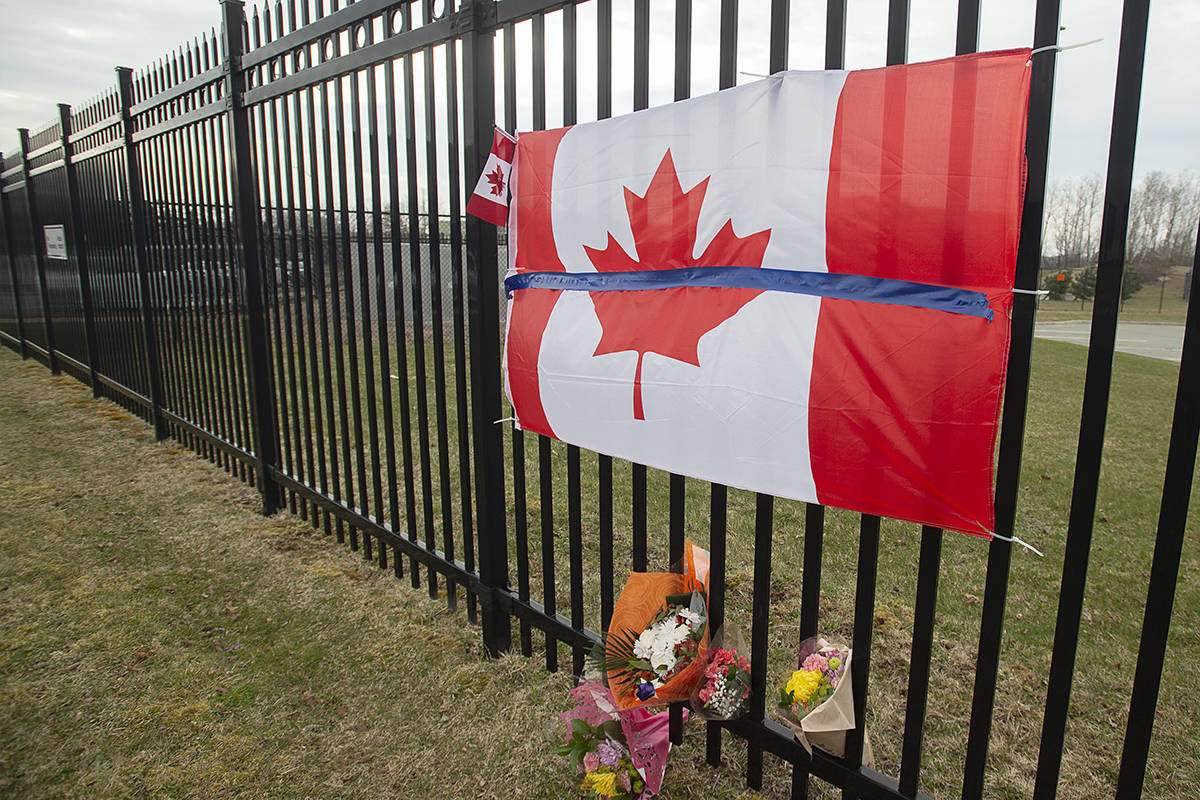 A tribute is seen at RCMP headquarters in Dartmouth, N.S. on Monday, April 20, 2020. Police say at least 17 people are dead, including RCMP Const. Heidi Stevenson, after a man, driving a restored police car, went on a murder spree in several Nova Scotia communities. Alleged killer Gabriel Wortman, 51, was shot and killed by police. THE CANADIAN PRESS/Andrew Vaughan

Investigators are continuing to piece together one of Canada’s deadliest mass killings, which saw a man who at one point donned a police uniform and drove a mock-up cruiser kill at least 18 people in Nova Scotia.

The victims of the weekend rampage include an RCMP officer, a teacher, two nurses, neighbours of the assailant and two correctional officers killed in their home over 50 kilometres away.

Prime Minister Justin Trudeau confirmed Monday the death count had risen to 18, not including the killer.

For family members who are grieving, the common question amid their anguish was what could have motivated the carnage.

Kelly Blair, 48, lost her beloved younger brother Greg, 45, and his wife Jamie, 40, when they were gunned down in their home in Portapique, N.S.

As with families of other victims, it seemed that normal life collapsed in an instant in the small, rural community overlooking Cobequid Bay.

For Blair, a couple she “did everything together with” — from driving all-terrain vehicles to camping — was suddenly gone, and her “brother and best friend” senselessly cut down.

“Why? It’s just why?” she said during a brief telephone interview.

“I honestly don’t really know what happened. They were both shot. That’s all we know, we don’t know why. We don’t know,” she said.

Meanwhile, after an excruciating day unable to contact her sister, niece and brother-in-law, Tammy Oliver-McCurdie learned Sunday evening that the family, neighbours of the killer, had been found dead in their Portapique home.

Jolene Oliver, who was turning 40 this year, her husband Aaron Tuck, 45, and their 17-year-old daughter had moved to the community after Tuck’s father died a few years ago.

An emotional Oliver-McCurdie said it’s a small comfort to know that the close trio died together.

“No matter how much thy went through in life, they always stayed together, and there were times that they had nothing,” Oliver-McCurdie said in a phone call from Alberta.

"I know the world can seem like a mean and ugly place right now, but there's a whole lot of good in the world too. You'll see it in your neighbours and in Canadians." #NovaScotiaStrong💙 pic.twitter.com/AgGj9Q2f2V

Investigators have said the shooter, a 51-year-old man, was killed after police intercepted him at a gas station in Enfield, N.S.

Neighbour Nancy Hudson said she and her husband used to socialize with the assailant and detected “some underlying issues that I think he had with his relationship. It was a red flag …. (What happened on the weekend) wasn’t a surprise to some degree, but not to this extreme.”

She said was obsessed with his girlfriend. “Just being jealous about things with her. I think that’s where things got in the way …. She was a beautiful girl.”

Portapique is home to about 100 residents, most of them living in modest homes along Highway 2 on the north shore of Cobequid Bay.

But while the first victims were discovered by RCMP there, his rampage continued across a swath of northern Nova Scotia.

Jody MacBurnie, a neighbour and close friend of Alanna Jenkins and Sean McLeod, correctional officers who were killed at their home on Hunter Road, in Wentworth, N.S., described a frightening morning on Sunday for residents of a rural road in the small town.

He said he saw RCMP cruisers rushing up the road, “then we came to find out their house was on fire.”

Nova Scotia Teachers Union president Paul Wozney identified teacher Lisa McCully as one of the dead in a Facebook post. She taught at Debert Elementary School, about a 20-minute drive north of Portapique.

“9300 NSTU hearts are broken along with those of her colleagues and students at Debert Elementary, as well as her family and friends who knew her not only as a passionate teacher but as a shining love in their lives,” he wrote.

Judy MacBurnie, the aunt of a Portapique couple gunned down in the community, said Greg and Jamie Blair were among those killed.

The couple ran a firm that provides service, sales and installation of natural gas and propane units in the area. MacBurnie said they had two small children who are being cared for by grandparents, and Greg Blair also has two older sons from an earlier relationship.

The Victorian Order of Nurses noted the deaths of nurses Heather O’Brien and Kristen Beaton.

“All of our frontline care providers are heroes. Yesterday, two of those heroes, Heather O’Brien and Kristen Beaton, were taken from their families, and from VON. We mourn their loss, and we mourn for their families,” wrote Jo-Anne Poirier, president and chief executive of the agency.

RCMP Const. Heidi Stevenson, a 23-year member of the force and mother of two, has been identified as the officer killed. A male officer suffered non-life threatening injuries.

Police say they were initially called to reports of a man with firearms in Portapique, N.S., on Saturday night.

There, officers found numerous people dead or wounded, both inside and outside a property. But Chief Insp. Chris Leather said that by the time police arrived, the shooter was gone.

Leather said the killings appeared to be, “at least in part, very random in nature.”

— With files from Keith Doucette and Holly McKenzie-Sutter

Celebration of Light cancelled for 2020 due to COVID-19