BC Electoral Boundaries Commission has suggested expanding Langley’s current two ridings to include a third, however some aren’t so happy about it.

About 20 people from various municipalities attended the hearing and 15 of those presented their views in front of commissioners Anton Boegman, Linda Tynan, and Justice Nitya Iyer of the Supreme Court of British Columbia – the committee chair.

In its preliminary reports, the commission proposed adding a new riding in the Langley area, to “accommodate the current population and projected growth.”

The proposed Langley-Willoughby riding would include the Willowbrook and Willoughby neighbourhoods, as well as the western section of Walnut Grove.

Pachal said the proposals came as a “surprise,” as it splits the Willowbrook Shopping Centre between two ridings. About two-third of the shopping centre would fall under the new riding and the rest in Langley City.

This could potentially mean two MLAs serving the shopping centre, which Pachal said would not benefit anyone.

“It is quite an eye-opener that the proposal doesn’t fit the geographical realities of where we live,” added the new City mayor.

The commission also proposed combining the Murrayville neighbourhood, the core of downtown Langley City, and an area to the south, around Campbell Valley Regional Park from 196th Street east to 216th Street.

Pachal and almost all Langley residents present at the hearing described Murrayville as being distinct from the Langley regional centre, and hence said it should not be lumped in the Langley City riding.

Sandra Brynjolfson, a longtime resident of Langley City, said Murrayville is a suburban community with little in common with the City.

“Langley City should be with Willowbrook and Willoughby, not Murrayville,” she said.

Ryan Starchek, who has been living in Langley for more than 12 years, shared similar sentiments.

“As City residents our lives are spent in Willowbrook and Willoughby area. We spend little to no time in Murrayville,” he said.

As for Murrayville resident Darrell Hawk, he said his neighbourhood is “not very urban,” and “should stay that way.”

“I moved to Murrayville, because I want to live in a suburban area and not in a major urban centre like Langley City,” he said, presenting his views to the commissioners.

His neighbourhood has more commonalities with Aldergrove, Hawk suggested.

Many residents at the hearing said the upcoming SkyTrain project would further boost development in the City, making the neighbourhood even more distinct from Murrayville.

Coun. James said existing boundaries “make more sense,” emphasizing that Murrayville’s social issues are different from City’s. She said the two neighbourhoods do not share a “community of interest.”

Pachal, too, pushed for the idea of sticking with existing boundaries.

“The proposals would also affect the collaboration between City and Township,” Pachal said.

Further, the commission proposed splitting Walnut Grove, with the western part of the neighbourhood joining the Langley-Willoughby riding.

Walnut Grove residents said the neighbourhood should be part of the Langley-Aldergrove riding, which includes Aldergrove, Fort Langley, and much of rural eastern Langley.

Rachelle Cashato also wants Walnut Grove to stay intact but suggested the neighbourhood be included in the Langley-Willoughby riding.

“[Walnut Grove] is highly connected and should not be divided by electoral boundaries,” Cashato said.

“The entirety of Walnut Grove should be included in one electoral district,” she added.

Michelle Lori, who has lived in Walnut Grove for more than 26 years, had similar thoughts.

Another Walnut Grove resident, Bryan Hogan, has lived in the neighbourhood with his wife and six daughters for about 11 years. He, too, said his “highly connected” neighbourhood should not be divided by electoral boundaries.

The commission concluded the hearing by assuring the attendees that they would take all the concerns into consideration when making its decisions.

James said she was impressed by the turnout at the hearing, which took place at Langley’s Sandman Signature hotel.

“Sounds to me like everybody was on the same page in regards to their concerns,” she concluded.

Those interested in listening to the audio recording of the public hearing can do so by visiting https://bcebc.ca/. People can also make submissions to the commission until November 22. The commission’s final report is expected to be published in spring 2023. 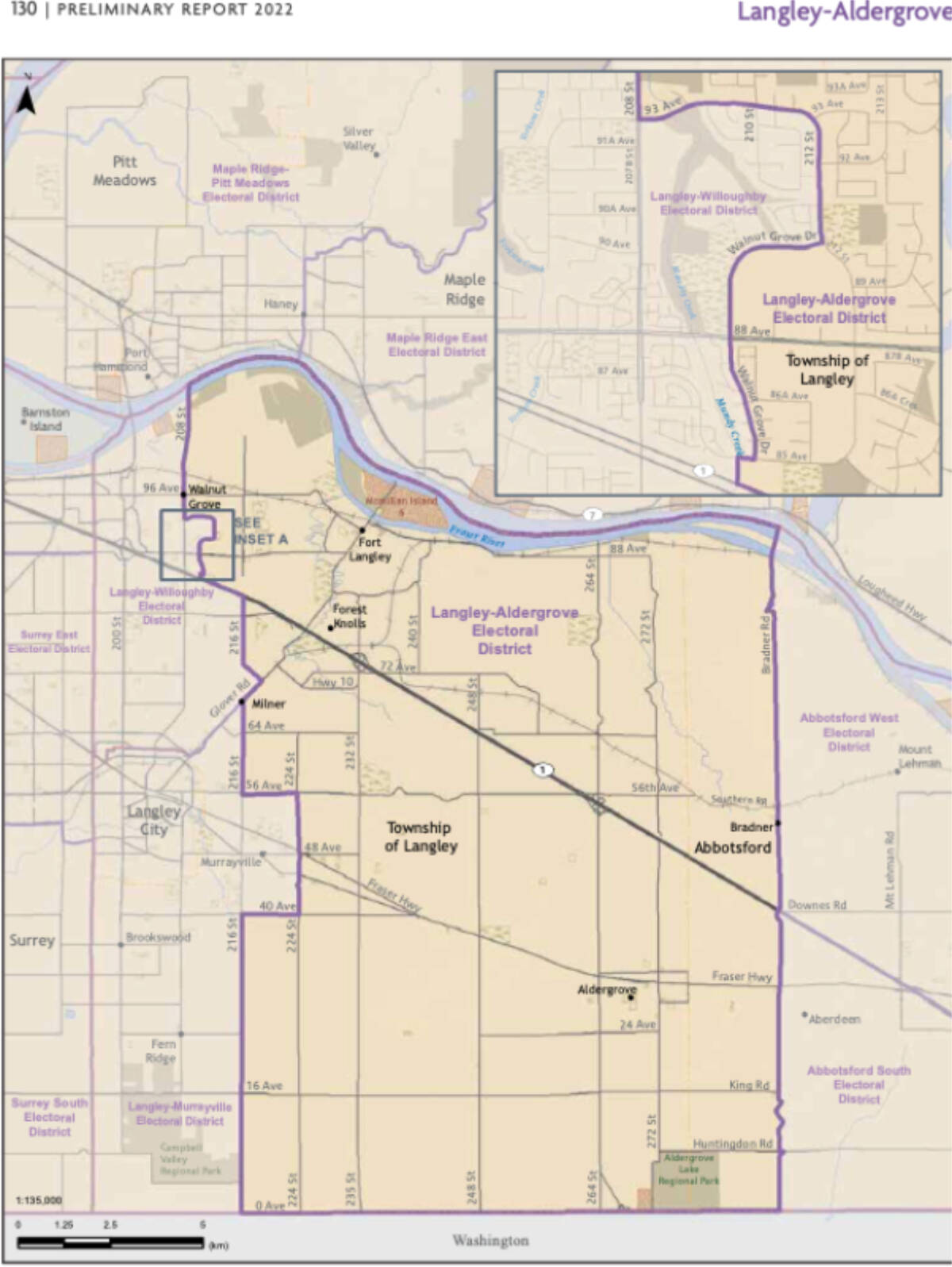 Langley-Aldergrove would includes Aldergrove, Fort Langley, and much of rural eastern Langley. It would also include a strip of Abbotsford up to Bradner Road. (BC Electoral Commission 2022 preliminary report) 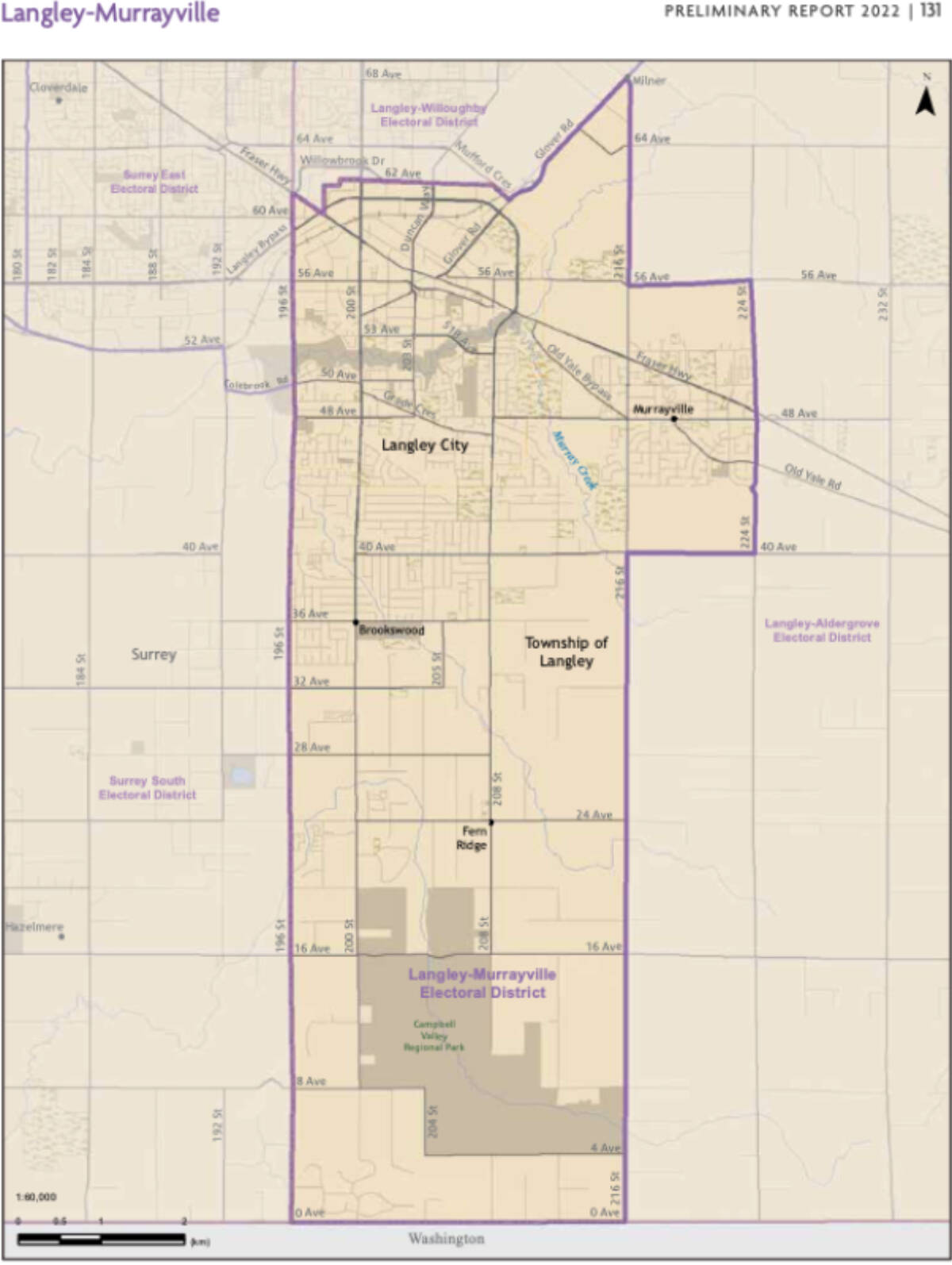 The commission proposed combining the Murrayville neighbourhood, the core of downtown Langley, and the area around Campbell Valley Regional Park from 196th Street east to 216th Street. (BC Electoral Commission 2022 preliminary report) 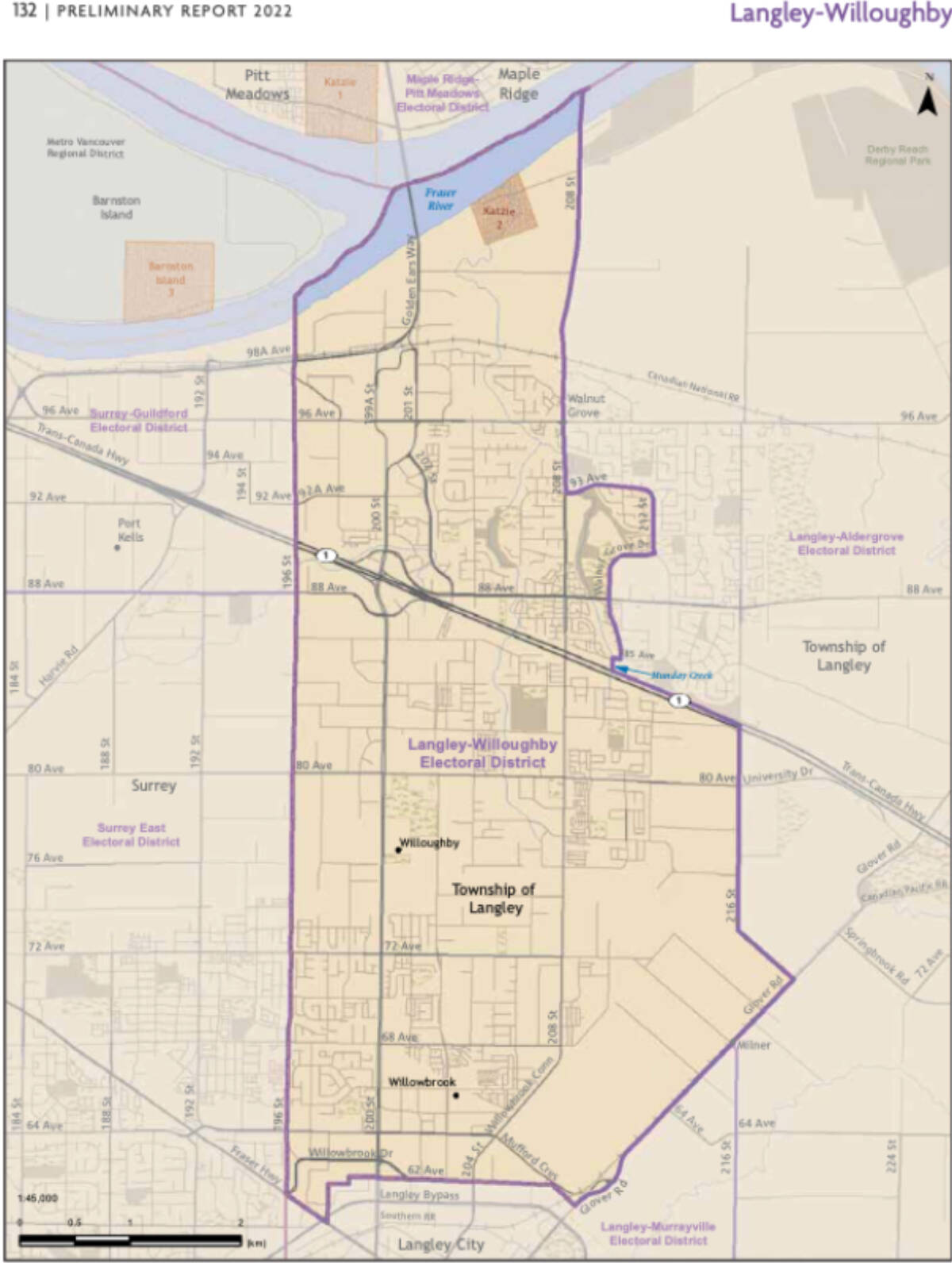