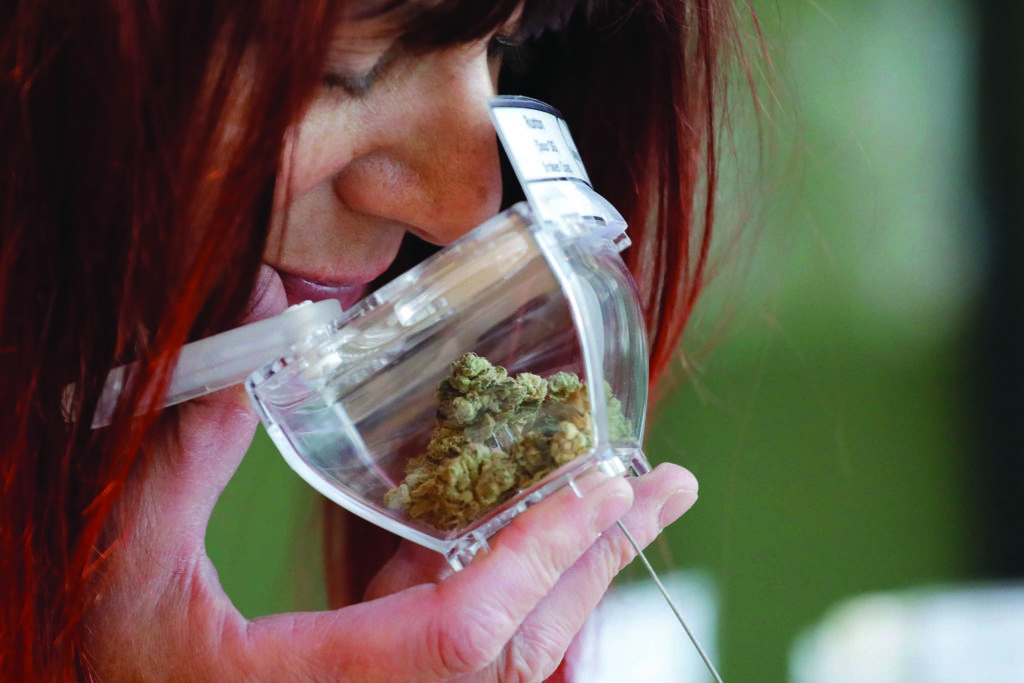 In this Wednesday, Oct. 9, 2019 photo, a customer sniffs a display sample of marijuana, in a tamper-proof container secured with a cable, sold at Evergreen Cannabis, a marijuana retail shop, in Vancouver, B.C. Hundreds of legal pot shops have sprung up. But many people still buy their weed on the sly, because taxes and other issues mean that craft marijuana costs nearly twice what it did before legalization. (AP Photo/Elaine Thompson)

Langley Township is on a path to having retail cannabis shops, with up to eight outlets allowed around the community.

On Monday, Township council approved the first and second readings of a bylaw that would allow one cannabis outlet in each of the Township’s major neighbourhoods, plus one near the 200th Street highway interchange.

Mayor Jack Froese thanked the public for patience as the Township drafted the bylaw, which was based on feedback from local surveys and public information sessions.

“I feel it was worth the wait to have something that was made in Langley,” the mayor said.

With tax revenue from the sale of cannabis going to the provincial and federal governments, Councillor Blair Whitmarsh asked if it would be possible for the Township to operate one or more outlets itself, as a way to retain the profits.

That would be possible, said Ramin Seifi, the Township’s head of engineering and community development.

Whitmarsh noted he wasn’t actively suggesting the Township do that, merely exploring the idea.

Council unanimously voted to approve the early readings of the bylaw. Coun. Eric Woodward recused himself due to a conflict of interest, as he has an interest in commercial properties in the core of Fort Langley.

Cannabis has been legal in Canada since 2018, but the provincial government is allowing each municipality to decide if it wants to have local cannabis sales.

While many municipalities have approved some stores, others have not or are still in the process of working through their own set of bylaws.

If given final approval, the Township’s bylaw would allow either private or government-run stores, within commercial districts, and set back from parks and schools, much like most liquor stores.

Each store will require a specific rezoning application from the Township, a local $5,000 licensing fee, as well as approval for a license from the Liquor and Cannabis Regulation Branch (LCRB).

Highlights from the survey in the report included:

• 62 per cent preferred a limited number of stores

• 85 per cent preferred setbacks from schools and parks