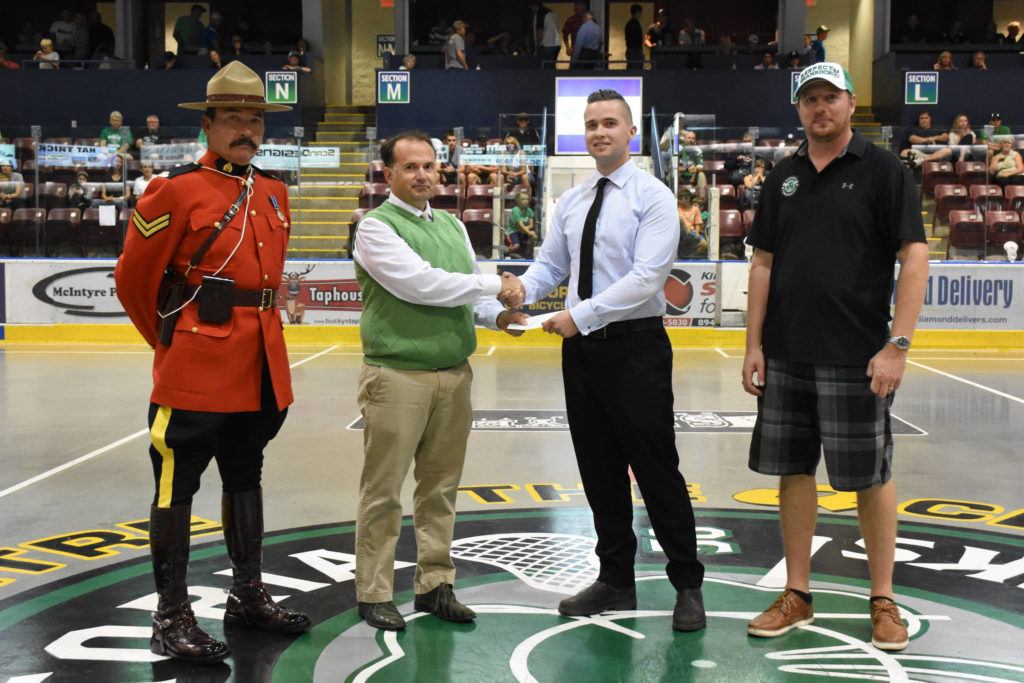 A young Saanich resident with aspirations set on working in law enforcement has been awarded the inaugural Const. Sarah Beckett Memorial Scholarship.

Tanner Stevenson, a soon-to-be 22-year-old volunteer with the Saanich Police Reserves and an infantryman in the Canadian Armed Forces Reserve, received the award during Sunday’s Victoria Shamrocks game, with the Westshore RCMP and Const. Beckett’s family in attendance.

“It feels amazing. I’m so honoured to be able to receive an award, especially when it’s in the name of Sarah,” Stevenson said. “It makes it very humbling and that much more special.”

Beckett lost her life in a tragic automobile crash last year when a drunk driver smashed into her patrol car while attempting to evade another officer. Kenneth Jacob Fenton pleaded guilty to impaired driving causing death and dangerous driving causing death earlier this year. He was sentenced to four years in jail and given a five-year driving prohibition upon his release.

“This scholarship acknowledges the loss of Const. Beckett and recognizes the vital role police play in service for our community, including increasing traffic safety. Tanner has clearly demonstrated his dedication to his community with his volunteer work.” said Colin Plant, chair of the Traffic Safety Commission. “This scholarship recognizes Tanner as he continues to work hard in school, pursuing his goal of becoming a police officer.”

The $2,000 scholarship will be awarded annually to a post-secondary student based on demonstrated academic achievement, financial need, community service record, and an expressed interest in pursuing a career in law enforcement. The Victoria Shamrocks provided an additional $1,250 in fan donations to the scholarship.

Stevenson said he’s the first person in his family to go into law enforcement, which has proven to be a new experience for both of them. He’s already completed two years of study at Camosun College, and will attend Royal Roads in the fall to complete a bachelor’s degree in criminal justice. The two-year online program will allow Stevenson to continue working and volunteering with the reserves while finishing his studies.

RELATED: Driver gets four years for crash that killed cop

According to Plant, choosing the inaugural winner wasn’t easy. “We could’ve given out five scholarships if we had the funding,” he said. But he’s confident that they found the right recipient in Stevenson.

“We’re pleased to award this to someone so deserving.”