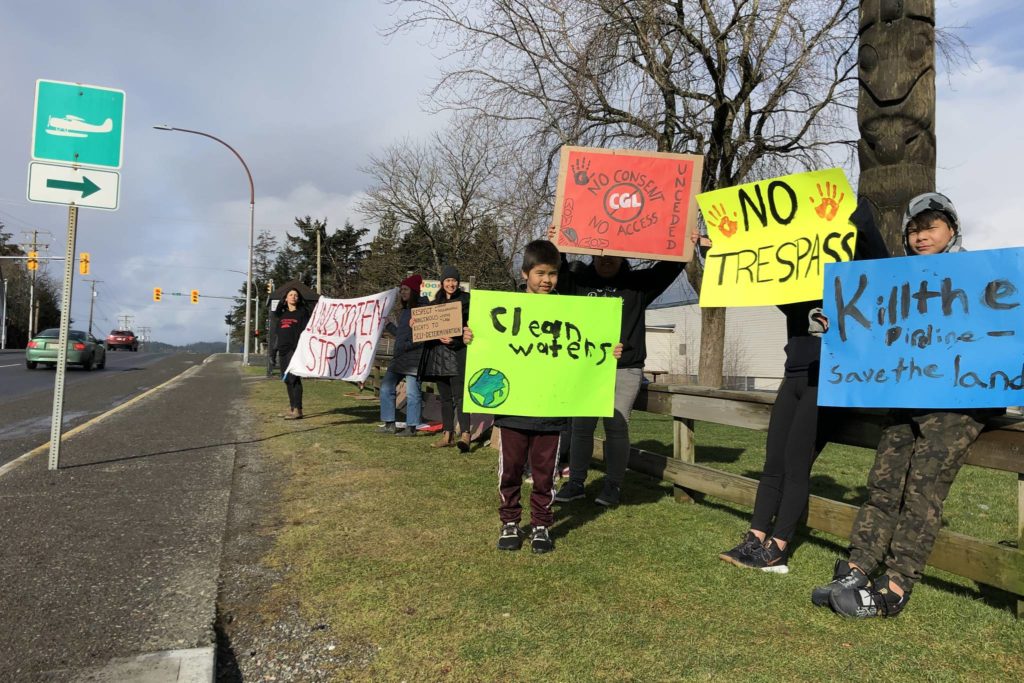 Protesters gathered on McBride Street across from the Prince Rupert RCMP station on Saturday in support of the Unist’ot’en dispute with the Coastal GasLink pipeline. On Monday, RCMP removed a resurrected blockade of CN rail lines near New Hazelton and according to unconfirmed reports arrested at least two hereditary chiefs. The blockade that halted transport to Prince Rupert was originally taken down on Feb. 13 but re-appeared on Monday was followed by Gitxsan and their supporters setting up a blockade on Hwy 16.

First Nation leaders were among dozens of people arrested as police enforced injunctions against protesters across the province late Monday and Tuesday.

The arrests followed an intensification of rail and road blockades amid little sign of progress in an impasse over a natural gas pipeline in northern British Columbia.

Hereditary Chief Spookwx of the Gitxsan Nation said Tuesday that he and three other hereditary chiefs were taken into custody as the RCMP broke up a demonstration on a CN Rail line outside New Hazelton, B.C.

Police say they arrested 14 people overnight at the site, which neighbours the traditional territory of the Wet’suwet’en Nation whose hereditary chiefs’ opposition to the Coastal GasLink pipeline has sparked nationwide demonstrations.

A similar blockade was set up by the Gitxsan earlier this month and removed as a show of good faith on Feb. 13, but Spookwx said the protest resumed because the RCMP have not acted quickly enough to leave the Wet’suwet’en’s traditional territory where the pipeline is under construction.

Elsewhere in B.C., anti-pipeline protests blocked an intersection that serves as a key entry point to the port of Vancouver, and a group of protesters remained at the B.C. legislature.

Vancouver police told the demonstrators to move out of the intersection at the port or risk arrest for violating a court injunction, and most of the estimated 70 protesters moved to the sidewalk. Six people who did not were arrested Tuesday afternoon, police said.

Commuter rail service was moving again between Vancouver and the Fraser Valley after demonstrators blocked rail tracks late Monday afternoon, saying they were acting in support of Wet’suwet’en hereditary chiefs opposed to the Coastal GasLink pipeline.

The injunction was granted to the Vancouver Fraser Port Authority on Feb. 9 and several people were taken into custody by police when a similar blockade was removed nearly three weeks ago.

Another three people were arrested at a blockade of the CP Rail tracks Tuesday near Chase, B.C. The RCMP said in a news release they were called to assist the Canadian Pacific Police Service after at least two dozen protesters obstructed the tracks.

The majority removed their belongings from the tracks voluntarily, they said.

Chief Judy Wilson of the Neskonlith Indian Band east of Kamloops said members of the band at the blockade were showing support for Wet’suwet’en hereditary chiefs.

Commuter rail service was moving again between Vancouver and the Fraser Valley after demonstrators blocked rail tracks late Monday afternoon, saying they were acting in support of Wet’suwet’en hereditary chiefs opposed to the Coastal GasLink pipeline.

Following his arrest on Monday night, Spookwx said supporters blocked Highway 16, the main route through the region, until about 3:30 a.m. when all the people arrested were released.

Spookwx, who also goes by Norm Stephens, said First Nations across Canada must act together as sovereignty issues raised by the construction of the pipeline are addressed because “their rights are ultimately at risk here.”

“The First Peoples of Canada should be treated with respect,” he added.

At least two dozen people blocked the tracks west of New Hazelton, the RCMP said in a statement.

One train reportedly nearly hit a male on the tracks, just before CN Rail was made aware of the blockade, the statement said.

The RCMP enforced the injunction at the request of CN Rail and the Mounties said those arrested were released on the condition that they abide by the injunction order and attend an upcoming court date.

Before midnight, police officers noted the tires were slashed on four patrol cars parked across from the highway, which the RCMP is investigating.

“We would like to remind the public that any attempts to block rail tracks is extremely dangerous and unlawful,” Cpl. Madonna Saunderson said in the news release.

“Should they put themselves in harm’s way, protesters are not only putting their own lives at risk, they are also putting the lives of train operators, rail employees, responding police officers and members of the public at risk.”

This report by The Canadian Press was first published Feb. 25, 2020.

Note to readers: This is a corrected story. A previous version based on information provided by the RCMP said seven people were arrested near New Hazelton, B.C.