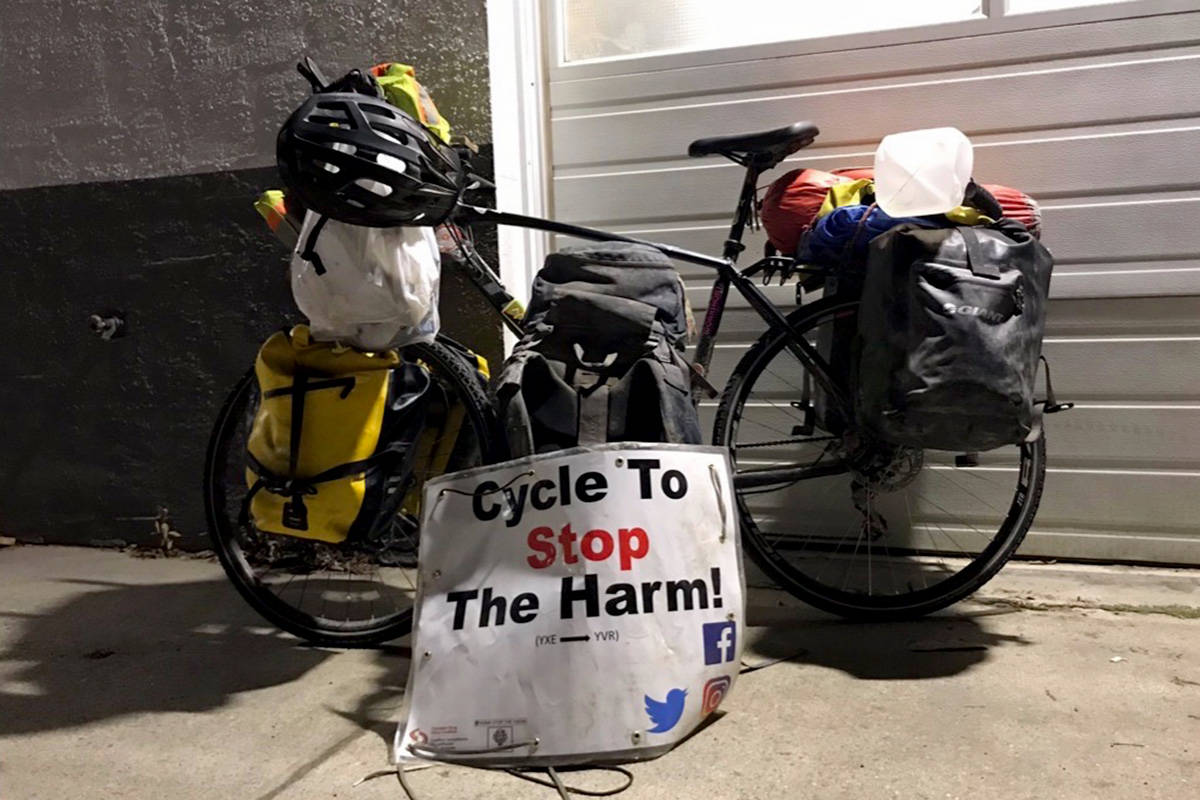 Iliajah Pidskalny’s bike is adorned with a sign advertising his cause. He has raised $21,000 for Canadian Drug Policy Coalition and Moms Stop the Harm. (Photo/Iliajah Pidskalny) 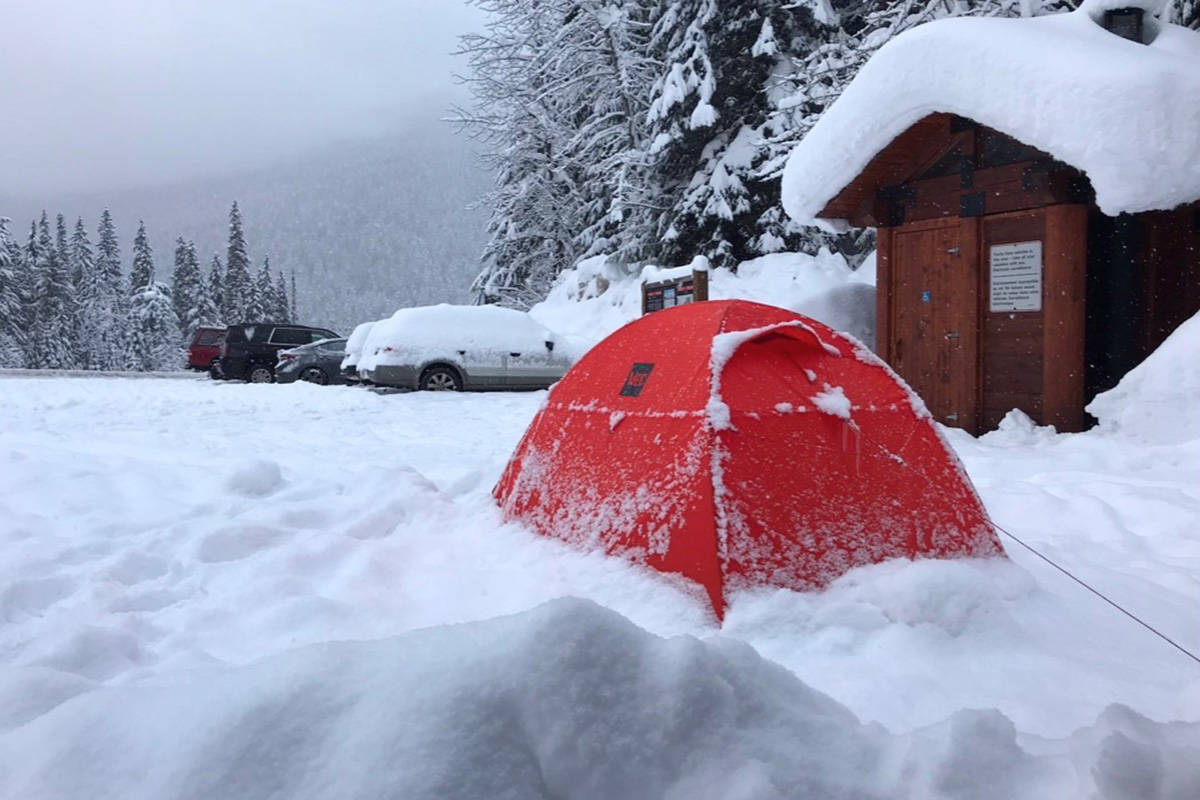 It was common for Iliajah Pidskalny to camp out in his tent during the nights along his winter cycling journey, such as this picture taken at Rogers Pass on Jan. 18. (Photo/Iliajah Pidskalny) 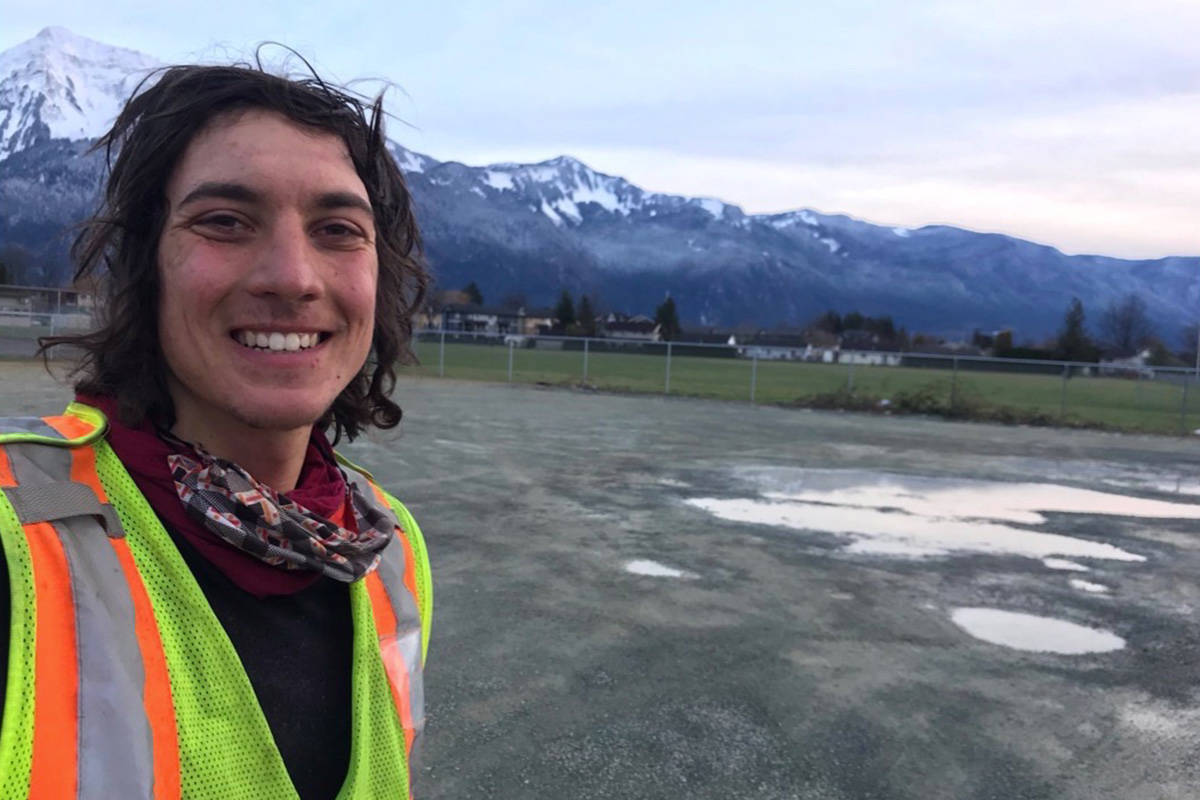 Iliajah Pidskalny has been riding from Saskatchewan to Vancouver to raise awareness and funds for change in drug policies and mental health help. Having passed through Hope this week, He is pictured here outside of Agassiz on Wednesday and expects to complete his journey to Vancouver on Friday. (Contributed Photo/Iliajah Pidskalny) 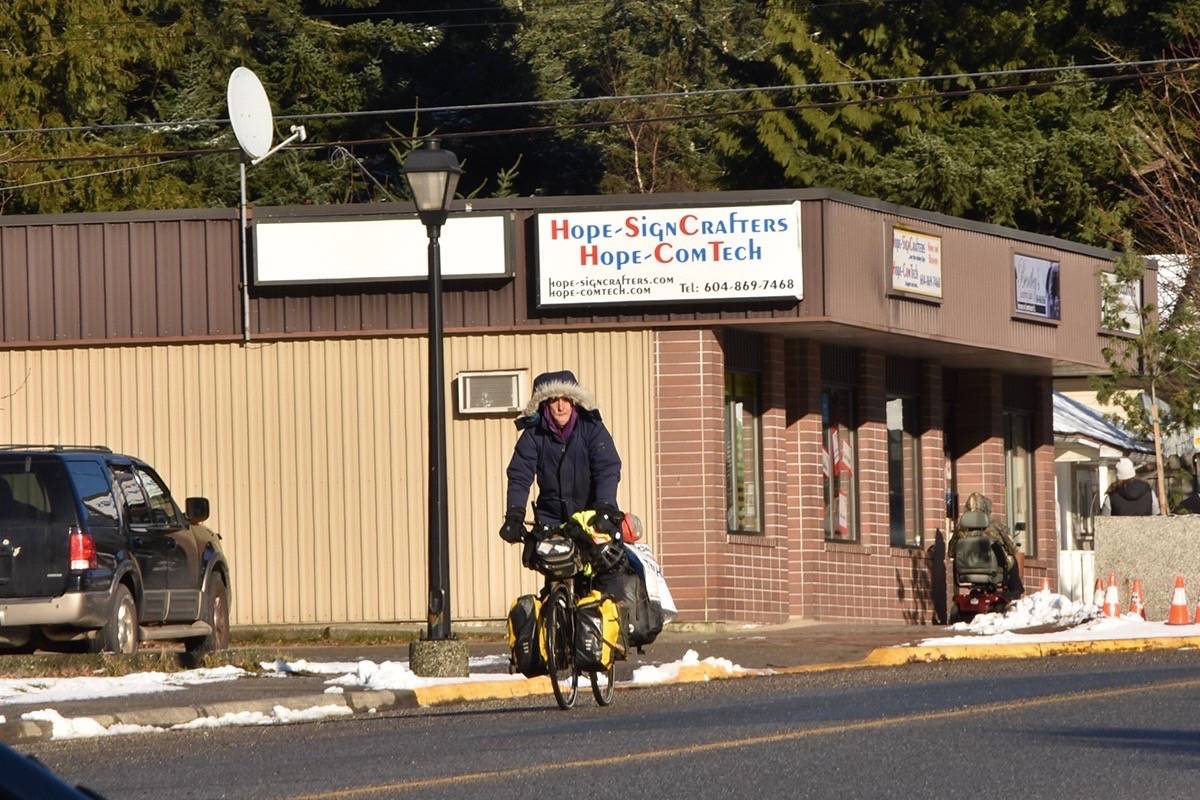 Cyclists make long trips across Canada all the time during the warmer months. Only a few bike Canada’s roads in the winter, but Iliajah Pidskalny braved the cold for a cause, recently passing through Hope on the last leg of his journey.

Pidskalny is raising money for the Canadian Drug Policy Coalition, aiming to raise awareness and advocate for a human rights approach to drug policies, shedding light on socioeconomic and psychological problems that may lead some people into a life or drugs or crime. He has been on the road since the beginning of January.

The recent college graduate fell in love with cycling while attending the University of Saskatchewan.

“I got hooked on cycling [in college] and I first did a cycling trip from Saskatoon to Vancouver – this exact [route], pretty much – with a buddy of mine when I was 19,” Pidskalny said. “That’s when I first fell in love with it and have done a trip since every single year.”

On this latest journey, he’s passed through Drumheller, Calgary, Revelstoke, Kamloops and Hope, to name a few.

On his travels, Pidskalny said he’s spoken to a number of people living on the street who have struggled with drugs and some who ended up homeless without struggling with addiction but rather with untreated mental health issues.

“Living on the road like this started to expose only some of the challenges involved with being homeless,” he said. “Of course, what I’m doing is totally luxury compared to that because it’s optional and heavy gear. I started to realize if you stand in the wrong place too long, it’s illegal. If you sleep anywhere outside, it’s illegal. All these things started to pop up.”

This isn’t just for the overdose crisis… it’s for a poisoning crisis, a suicide crisis, a homeless crisis, a depression crisis. This is for a mental health crisis. A crisis of miseducation and misunderstanding, of greed and inequality. Stop the stigma. #stoptheharm 🛑 pic.twitter.com/sZ4YW747Er

In Pidskalny’s view, the “war on drugs” has overlooked underlying mental health issues for decades, and he said it’s time for a more empathetic approach.

His reasons for biking in the winter are dual: because it draws more attention to his cause and because that’s when he had the idea to do it.

“I really take this issue seriously, and I really wanted to gain as much awareness about it as possible,” Pidskalny said. “Even though it’s extremely challenging and I really hate the cold I was like, ‘Okay, I know I can do it.’”

He said he did a test run, biking east in October and November.

The wind has posed the biggest challenge for Pidskalny so far.

“It’s always the same with any of these bicycling trips, the headwinds,” he added. “They kind of had stopped after Canmore and I feel like I’ve been moving pretty quickly since then.”

Pidskalny has kept in good shape throughout the journey, suffering frostnip – an injury just shy of full-on frostbite – on his toes. He’s survived on rice noodles, peanut butter and energy bars of his own creation made of dates, peanut butter, chocolate and nacho tortilla chips.

“I’d first done it without the tortilla chips, and I was like ‘Man, this needs some more [substance],” he said. “It clicked; it’s so good. Slightly salty, slightly crunchy.”

Pidskalny is no stranger to living on the road, having lived in a tent for several summers. His original pre-pandemic plan for the past year was to bike from Saskatchewan to Mexico, but COVID-19 curbed that dream for now.

Aside from the ongoing fundraiser, Pidskalny said he has no immediate personal ties to the cause.

“Meeting people on the street, every conversation is personal, Every person is a person. I don’t think everyone should wait until they lose a loved one to start to care about this,” he said.

There’s a lot of people working really hard at this and have been looking at policies for decades,” Pidskalny added. “I couldn’t describe the detailed policies. I know decriminalization at least with possession of certain amounts of illicit drugs seems to be a good starting point, that way people are not criminalized for this issue and they can start to reach out for help.”

Pidskalny surpassed his fundraising goal of $20,000. As of Wednesday morning, his GoFundMe page states he’s raised $21,379 from 276 donors.

Pidskalny said the journey so far has been filled with memories.

“I feel like I could pull a day out of a hat and claim that as my most memorable, and that’s what I want out of life,” he said. “I just want each day to be this memorable day, even if the day was full of nothing, even if I just sat at the top of a mountain and slept all day, that could be memorable. I don’t think I could choose something without changing my mind later.”

Pidskalny finished his ride on Friday, Jan. 29, at Jack Poole Plaza where the Olympic Cauldron burned during the 2010 games.

He now plans to spend some time exploring the Fraser Valley by bicycle before heading back – so keep a careful watch for Pidskalny touring around this weekend.