Concerns about the potential safety hazard created by uneven sidewalks led Langley City mayor Ted Schaffer and a majority of council to approve removing most of the trees along the One-Way.

The vote Monday night came in response to a staff report that the trees should be taken out and eventually replaced because some are creating tripping hazards by making the sidewalk heave upwards and others have been excessively trimmed to let power and telephone lines run over them.

Schaffer called it a “nasty hazard” and said he has personally witnessed an incident that demonstrated the safety hazard posed by the uneven paving bricks.

“I happened to watch an elderly gentleman (a veteran) do a face-plant,” Schaffer said

“It was his face that broke the fall.”

Councillor Val van den Broek said the removal should be delayed and efforts should be made to relocate the trees when they do come out.

“We just don’t seem to have enough greenery in the downtown Langley core to begin with,” van den Broek said.

The trees along Fraser Highway between 204 and 206 Streets, where the road narrows to a one-way single lane, “are not the appropriate type of species for pedestrian sidewalk areas,” said a report by Director of Engineering, Parks and Environment Rick Bomhof.

“The trees on the north side have also been severely pruned around the BC Hydro and Telus lines, which is detrimental to the health of the trees and create an aesthetically unpleasing appearance,” Bomhof added.

The report noted seven trees along the one way have already been removed, with a generally positive response to benefits that include a smooth sidewalk with less of a tripping hazard, better visibility of businesses and improved lighting.

As well, plans are in the works to rehabilitate the One-Way and it is expected “most if not all the (existing) trees will be removed and replaced with more appropriate trees and/or plantings” in 2019, the report said.

While the trees are creating problems and they are due to go anyway, the report said taking them out now would have some drawbacks.

“… the road may look quite bare without the foliage, there will be no trees on which to place Christmas lights and there will be less shade downtown in the summertime.”

The report suggests additional Christmas lights can be added to the street light poles to offset the reduced tree lights.

If approved by council, four trees will remain.

Two are at McBurney Lane and two are on the north side of the street just east of 204 Street.

The proposal is scheduled to be heard by Langley City Council at their Monday night regular meeting.

Langley City isn’t the only Lower Mainland municipality to have a tree problem that requires wholesale removal to fix.

In 2016 the street was overhauled with the removal and replacement of sidewalks, new street lighting, new stamped pedestrian crosswalks, road paving, new trees and landscaping.

Eight of the Ladner street trees that were identified by an independent arborist as healthy enough to replant, including the Christmas tree were replanted at a local Delta park. 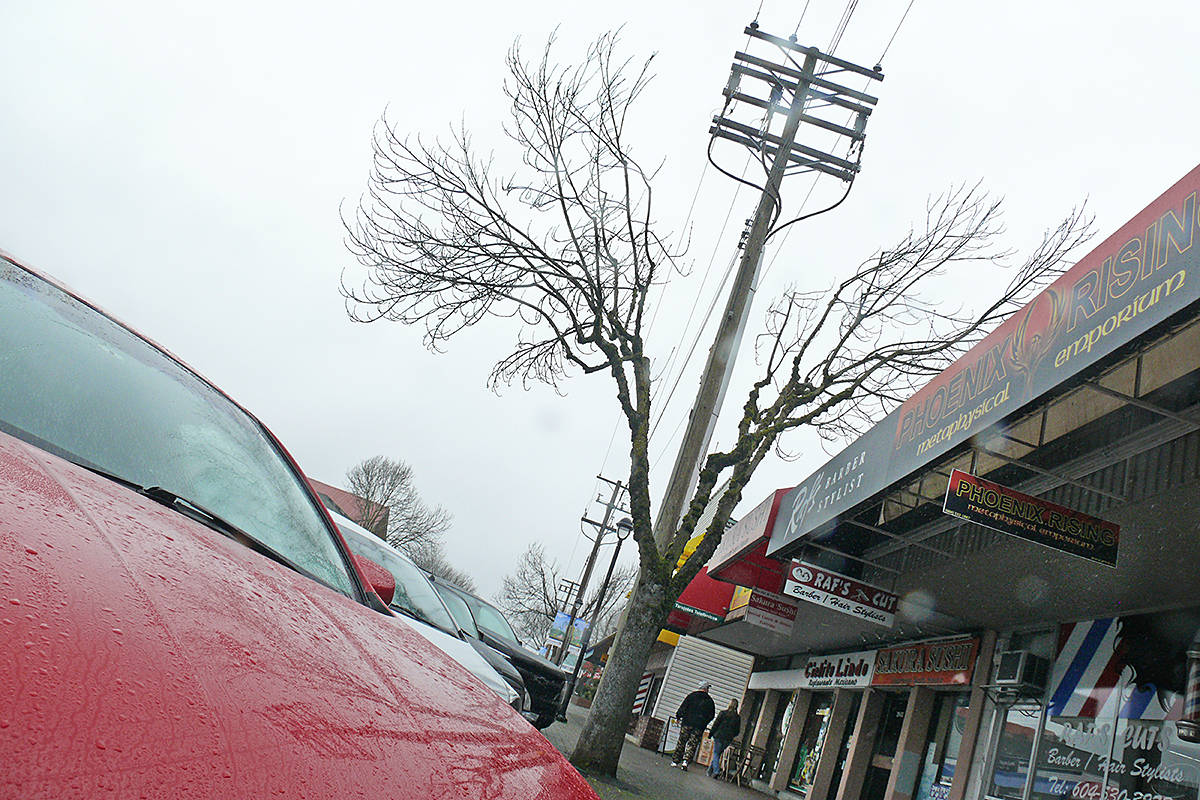 Some trees on the one way have been “severely pruned” to accommodate BC Hydro and Telus lines creating an “aesthetically unpleasing appearance” a report to Langley City council states. Dan Ferguson Langley Times

No to temporary tree protection in Langley Township