It was one of the scariest moments of their lives.

On Jan. 13 at 8:07 a.m., Langley honeymooners Drew and Kailey St. Cyr were half asleep at their Airbnb in Kona, Hawaii, when Drew’s phone started making an “obnoxious loud sound.”

“We thought it was a fire alarm at first.”

Confused, Kailey grabbed the phone and passed it over to Drew, who noticed a strange message on the screen: “Ballistic missile threat inbound to Hawaii. Seek immediate shelter. This is not a drill.”

“I read it and honestly didn’t know how to react,” Drew said.

“I just repeated what it said, and she jumped out of bed asking if I was serious and ran to grab her glasses in the bathroom.”

Drew got out of bed, threw on some shorts, and went outside onto the balcony of their third floor room, which looked out across an enclosed courtyard towards other balconies.

Several other patrons were on their balconies as well. They had all received the same message on their phones at the same time.

“This is when the panic started setting in for myself and a lot of others,” Drew said.

“I’m a pretty calm person so I wasn’t sure how to react at first, more just shock. My wife was in tears at this point and turned on the TV to see if it said anything.”

There was nothing on the TV, adding to their confusion.

They tried to phone their families back home in Canada, but because they were in the middle of an emergency, all phone lines were down and they couldn’t make any outgoing calls.

“I then went out our door again and there were a few people saying Hawaii has no bomb shelters, so there was nowhere to go. It was odd that none of the island’s missile threat sirens were going off (over 300 on the islands),” Drew said.

Luckily, their WhatsApp was working, and Drew was able to reach his younger brother. His family was in shock.

“(It’s a) very weird feeling being on the phone with your family when you don’t know if you’ll speak to them again, or what was going to happen. That was the worst part for me, made it feel very real at that point.”

Some of the people from their complex were piling into their cars and leaving for higher ground, while others fled to the hospital — one of the only buildings in the area that can be locked up tight.

Drew and Kailey came to the realization that there was nothing they could do but wait. They kept the TV on, looking for any information, and checked Twitter for updates. Kailey continued to call her family members, who were not picking up.

Fifteen minutes after receiving the original alert, Kailey saw an announcement on Twitter that Hawaiian civil defence had made a mistake.

It was a false alarm.

NO missile threat to Hawaii.

Drew went out onto the balcony again and overheard a lady on the phone with her brother in law, who’s in the American military, stating the same news.

“Nothing was officially confirmed at this point until 38 minutes later when I received another message saying it was false,” Drew said.

“It was a very unique feeling you can’t describe. There was nothing we could do but wait and see what happens. There was nowhere to go.”

By the time the second message came through, every news station was reporting on it, and they were finally able to get more detailed information. A push alert warning of a ballistic missile was accidentally sent out, causing panic among more than a million people in Hawaii.

The Hawaii Emergency Management Agency is still trying to figure out how it happened.

“(It) took a couple hours for everything to seem normal again, and by that night you couldn’t tell anything happened by people’s reactions or attitudes,” Drew said.

“We went out and watched the football games and the local sports bar and had a stress-free time.” 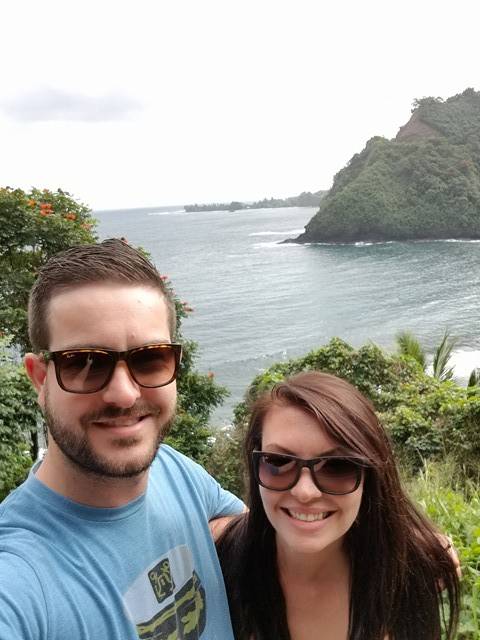 Langley couple Drew and Kailey St. Cyr were honeymooning in Hawaii when a ballistic missile alert was sent to their phone. Photo courtesy Drew St. Cyr

A missile alert was sent to Drew St. Cyr’s phone when he was honeymooning with his wife, Kailey, in Hawaii. Photo courtesy Drew St. Cyr.