Residents of Kentucky counties where tornadoes killed several dozen people could be without heat, water or electricity in frigid temperatures for weeks or longer, state officials warned Monday, as the toll of damage and deaths came into clearer focus in five states slammed by the swarm of twisters.

Kentucky authorities said the sheer level of destruction was hindering their ability to tally the devastation from Friday night’s storms. At least 64 people were killed in the state alone, though officials believe the death toll will be lower than initially feared since it appeared many more people escaped a candle factory in Mayfield, Kentucky, than first thought. As searches continued for those still missing, efforts also turned to repairing the power grid, sheltering those whose homes were destroyed and delivering drinking water and other supplies.

“We’re not going to let any of our families go homeless,” Kentucky Gov. Andy Beshear said in announcing that lodges in state parks were being used to provide shelter.

In Mayfield, one of the hardest hit towns, those who survived faced a high in the 50s and a low below freezing Monday without any utilities.

“Our infrastructure is so damaged. We have no running water. Our water tower was lost. Our wastewater management was lost, and there’s no natural gas to the city. So we have nothing to rely on there,” Mayfield Mayor Kathy Stewart O’Nan said on ”CBS Mornings.” “So that is purely survival at this point for so many of our people.”

Dossett warned that full recovery in the hardest-hit places could take not months, but years.

“This will go on for years to come,” he said.

Kentucky was the worst hit by far in the cluster of twisters across several states, remarkable because they came at a time of year when cold weather normally limits tornadoes. At least 64 people died there, Gov. Andy Beshear said Monday, offering the state’s first specific count of the dead. There were at least another 14 deaths in Illinois, Tennessee, Arkansas and Missouri.

Still, Beshear warned that it could take days longer to pin down the full death toll, with door-to-door searches impossible in some places.

“With this amount of damage and rubble, it may be a week or even more before we have a final count on the number of lost lives,” Beshear said.

Initially as many as 70 people were feared dead in the Mayfield Consumer Products candle factory, but the company said Sunday that eight deaths were confirmed and eight people remained missing, while more than 90 others had been located.

“Many of the employees were gathered in the tornado shelter and after the storm was over they left the plant and went to their homes,” said Bob Ferguson, a spokesman for the company. “With the power out and no landline they were hard to reach initially. We’re hoping to find more of those eight unaccounted as we try their home residences.”

Debris from destroyed buildings and shredded trees covered the ground in Mayfield, a city of about 10,000 in western Kentucky. Twisted sheet metal, downed power lines and wrecked vehicles lined the streets. Windows were blown out and roofs torn off the buildings that were still standing.

Firefighters there had to rip the doors off their station to get vehicles out, according to Fire Chief Jeremy Creason on “CBS Mornings.”

“Words cannot describe the bravery, the selflessness that they’ve exhibited,” he said of his employees. “We had to try and navigate through all the debris up and down our streets. We were responding with ambulances with three and four flat tires.”

Four twisters hit Kentucky in all, including one with an extraordinarily long path of about 200 miles (322 kilometers), authorities said.

In addition to the deaths in Kentucky, the tornadoes also killed at least six people in Illinois, where an Amazon distribution center in Edwardsville was hit; four in Tennessee; two in Arkansas, where a nursing home was destroyed and the governor said workers shielded residents with their own bodies; and two in Missouri.

Pope Francis expressed his sadness over the “devastating impact” of the tornadoes. In a telegram sent Monday by Vatican secretary of state, Cardinal Pietro Parolin, the pope offered prayers for those who died, “comfort to those who mourn their loss and strength to all those affected by this immense tragedy.” 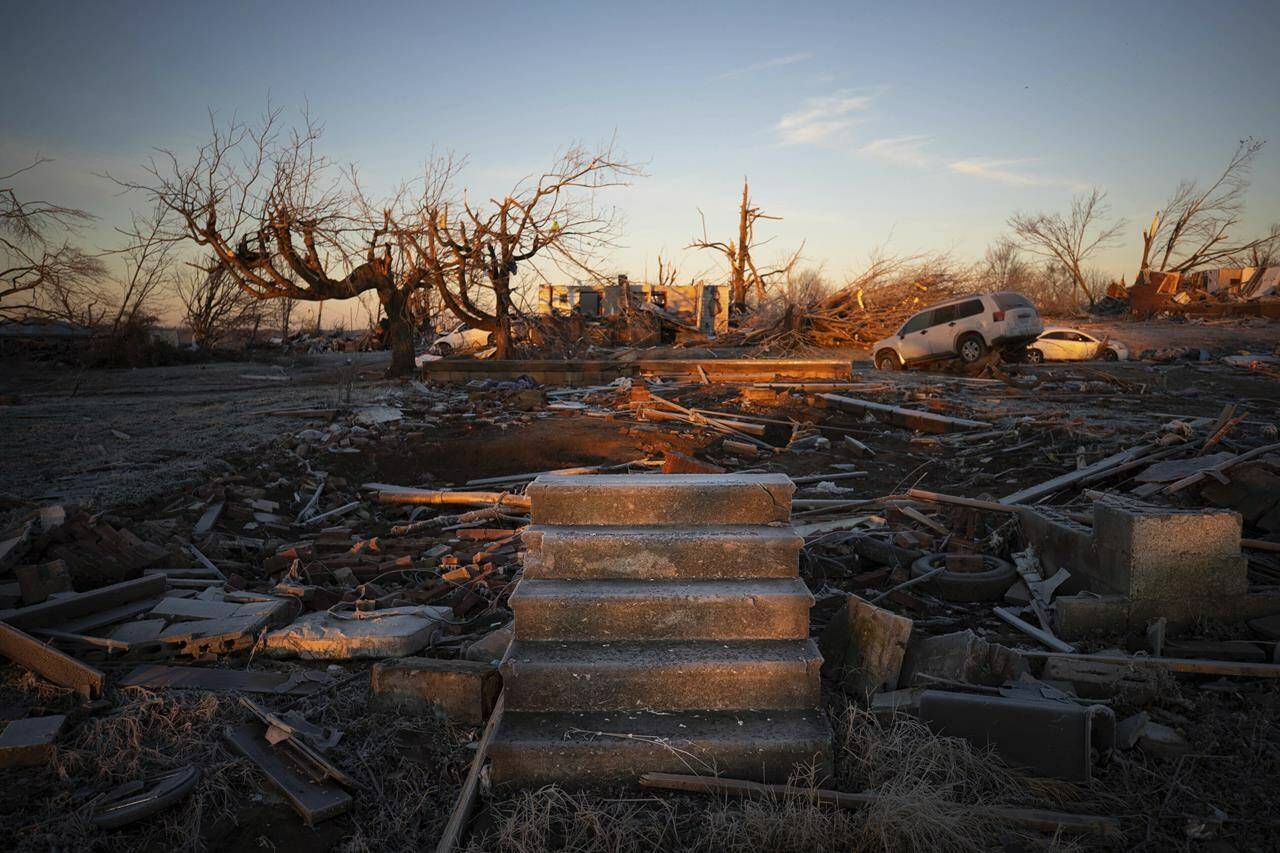 The front steps of a house are all that remains after a tornado in Dawson Springs, Ky., Sunday, Dec. 12, 2021. A monstrous tornado, carving a track that could rival the longest on record, ripped across the middle of the U.S. on Friday. (AP Photo/Michael Clubb)