An unexpected — but not unwelcome — arrival at an animal sanctuary in Langley has the non-profit farm facing large vet bills and future feeding and housing costs.

With the sound of squealing and clucking in the background, Happy Herd Farm Sanctuary owner Diane Marsh tells of how their zen, happy farm full of goats, a cow, pigs and feathered friends took a frenetic turn last week with the arrival of five tiny, pink piglets.

Happy Herd Farm Sanctuary, run by Marsh and her partner Stephen Wiltshire, along with many dedicated volunteers, took in two pot-bellied pigs this summer after they were seized in a BC SPCA cruelty investigation.

“They were abused so badly that they are terrified of people. You can raise your hand and they start screaming. They came to us as Jennifer and Angelina but we renamed them Lulu and Lily to give them a fresh start,” said Marsh.

“Thanks to the volunteers they were coming a long way,” she added.

But then Marsh went to check in on the pigs early Friday morning and saw what she thought were rats all around Lulu.

“When we took on the pigs, the SPCA told me there was no way either could be pregnant,” said Marsh.

But they were wrong.

There in the barn was a litter of five piglets.

“I saw this one tiny piglet lying on its side and I thought it was dead. I picked it up and could feel a heartbeat,” she said. “So here we were, texting the vet to say we were bringing in a sick piglet and getting the other piglets warmed in the house.”

The tiny piglet was rushed to the Langley Animal Hospital on 203 Street and given goat colostrum. He seemed to be doing OK, but then Marsh had to rush him back to emergency when he took a turn for the worse on day three.

Bottle service for this little one 🍼🐷 #animalsarefriends update. We rushed Garth to clinic on Tuesday shaking uncontrollably and not drinking.he put saline under the skin and started him on an antibiotic and immediately drank. He spent the day with his mum yesterday but cam in for the night, ate well at 4:30, 6 and 7:15 and went out to mum again, but now the shaking is back and waiting to hear from the vet. This is such a roller coaster of emotions…keep fighting little one

Posted by The Happy Herd Farm Sanctuary on Wednesday, August 23, 2017

In the meantime, new mom Lulu was having complications of her own.

The sow had suffered birthing complications that required surgery and treatment for life-threatening sepsis.

“We had to lift her into my mini Cooper and take her in on a stretcher and straight into X-rays. The vet said he had never seen anything like it in his life.”

That’s where it was discovered that a fetus had fallen through the uterine lining and was in the pig’s abdominal cavity. A full surgery was required, including removing the uterus.

She’s recovered now and is caring for her babies. But the runt of her litter, now named Garth, is under 24/7 care, including bottle feedings every two hours, while his siblings have already more than doubled in size.

Video they have taken of the litter feeding, shows one feisty piglet trying to take over Garth’s feeding spot. But the two-pound piglet holds his own.

“That’s the thing that has just amazed us and inspired us through this, is what a little fighter Garth is. This has been such a traumatic experience but watching him fight has made us fight too,” she said. “He’s won all our hearts.”

Beyond the pricey vet bills, Happy Herd said the five unexpected house guests are going to create a number of unforeseen costs, including construction of new paddocks.

These five pigs have the potential to weigh 400 pounds each, which means they will need a lot of room and food. The litter will also eventually have to be spayed and neutered.

That’s why Happy Herd is asking for donations to help them continue to care for the animals.

Anyone who would like to help out can donate directly on their website at happyherd.org/donations or, to do an e-transfer, send money to animals@happyherd.org.

A $10 donation can buy grain for five animals for a week.

They have applied for charity status, but are waiting for their status number.

The sanctuary cares for dozens of animals, including chickens, turkeys, sheep, cows, goats, a donkey and piglets. When they can, they take animals rescued in cruelty cases.

They took on a white goat that was supposed to be put down because it was in such bad shape.

“We named her Jilly Bean and now she sleeps on our deck just outside our kitchen every night.”

To check in on how the litter and Garth are doing through videos go to the Happy Herd Facebook page. 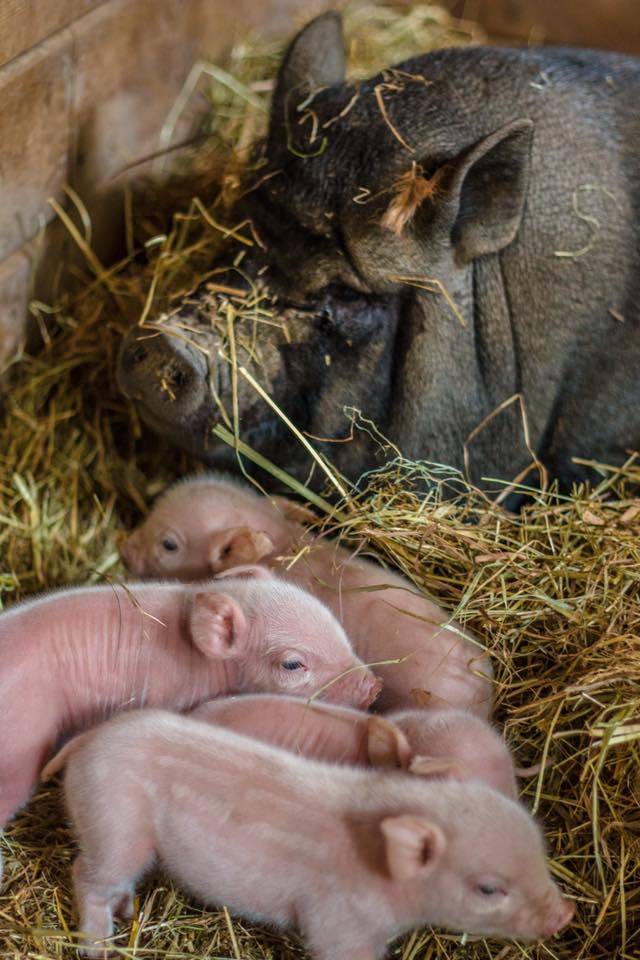