Years of work by volunteers with TinyKittens to reduce the population of feral cat colonies in Langley is paying off in a big way this spring.

TinyKittens founder Shelly Roche said that around February she expected to start getting the usual calls – pregnant cats, maybe sick and injured cats – but the phone was quiet.

That was because at the cat colonies TinyKittens volunteers have been working with over the years, the TNR system – trap, neuter, release – has been working.

“It was pretty exciting,” Roche said of the realization that their efforts were so successful at multiple sites.

TinyKittens has been working with property owners in several locations that hosted sizable cat colonies.

Another six are in care right now, and volunteers and property owner make sure the remaining cats are being fed.

“At another colony, we’ve spayed and neutered 100 per cent of the 89 cats,” Roche said.

Those successes mean fewer litters, fewer cats turning up with illness and injuries, and a slow reduction in the number of cats living feral in the bush, on farms, and on industrial lands.

“We’ve learned a lot since we started,” Roche said, noting that her group has been working with feral cat populations for six years now.

There are tens of thousands of feral cats thought to live in Langley. Feral cats in large numbers can be detrimental to local wildlife, consuming wild bird species and native mammals along with the mice and rats that farm cats were originally brought in to control.

Roche said that with the stabilized colonies, the remaining cats are left in place to live out their days healthier, with shelter and food available, while helping keep rodent populations in check on the farms where they are often found.

The system of TNR, combined with vaccinations and re-homing kittens and any cats that can be socialized is endorsed by the BC SPCA.

There are about five colonies TinyKittens is still involved with in some way. Some are stabilized, others are in progress. The volunteer group also works with homeowners on a more one-off basis, when there are a couple of stray cats who live in a suburban backyard. The same TNR system is used, but on a much smaller scale.

“We’re always available if a cat shows up that needs medical care.”

Despite the big advances at several colonies, there is a lot more work to do.

“It is still a huge problem,” said Roche.

Building relationships with property owners to access cat colonies can take time. It requires trust, Roche said, to let a group of volunteers regularly come onto your land.

“We just want to make sure the cats have better lives, and the humans have a positive relationship with the cats,” she said.

She’s hoping more people will call, now that the stabilization of some of the existing colonies has freed up volunteer time to tackle new ones.

Anyone with a cat colony on their property or in their neighbourhood can contact TinyKittens at 604-653-0445, including by text, or email meow@tinykittens.ca. 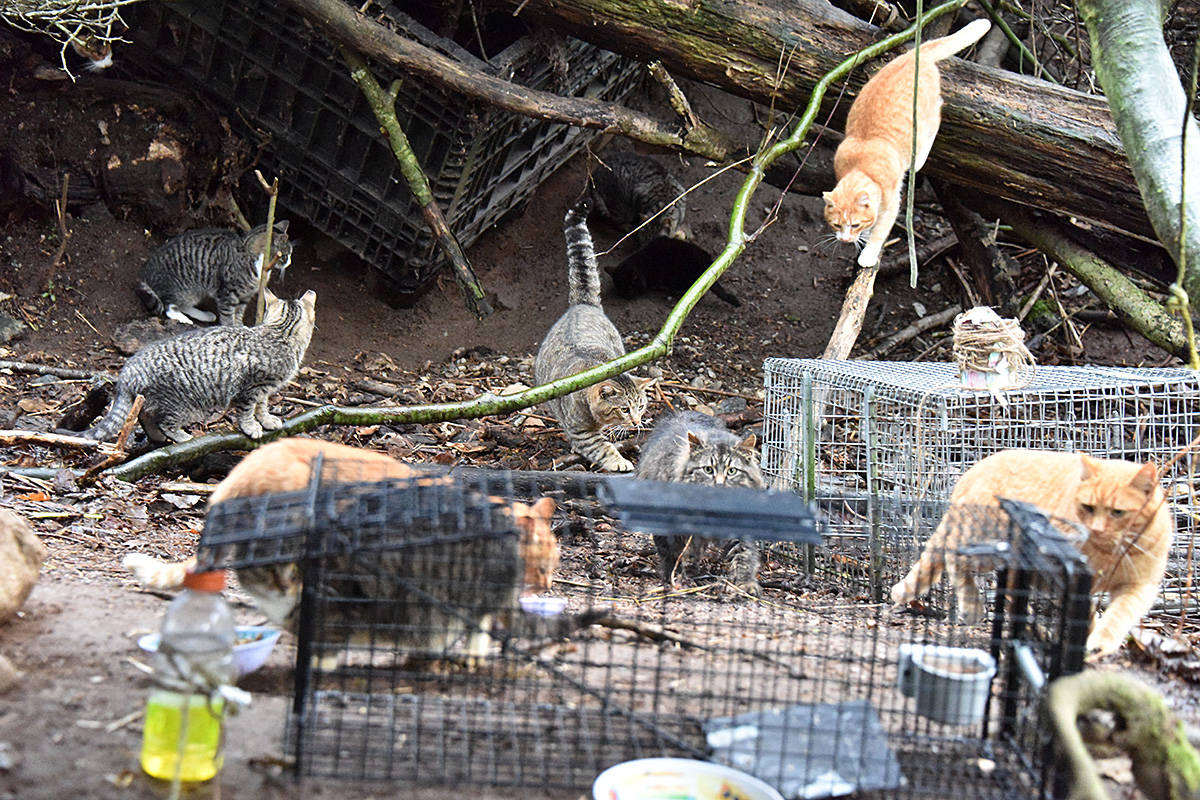 Cats at one of the cat colonies where TinyKittens has been running its TNR programs. (TinyKittens/Special to the Langley Advance Times)