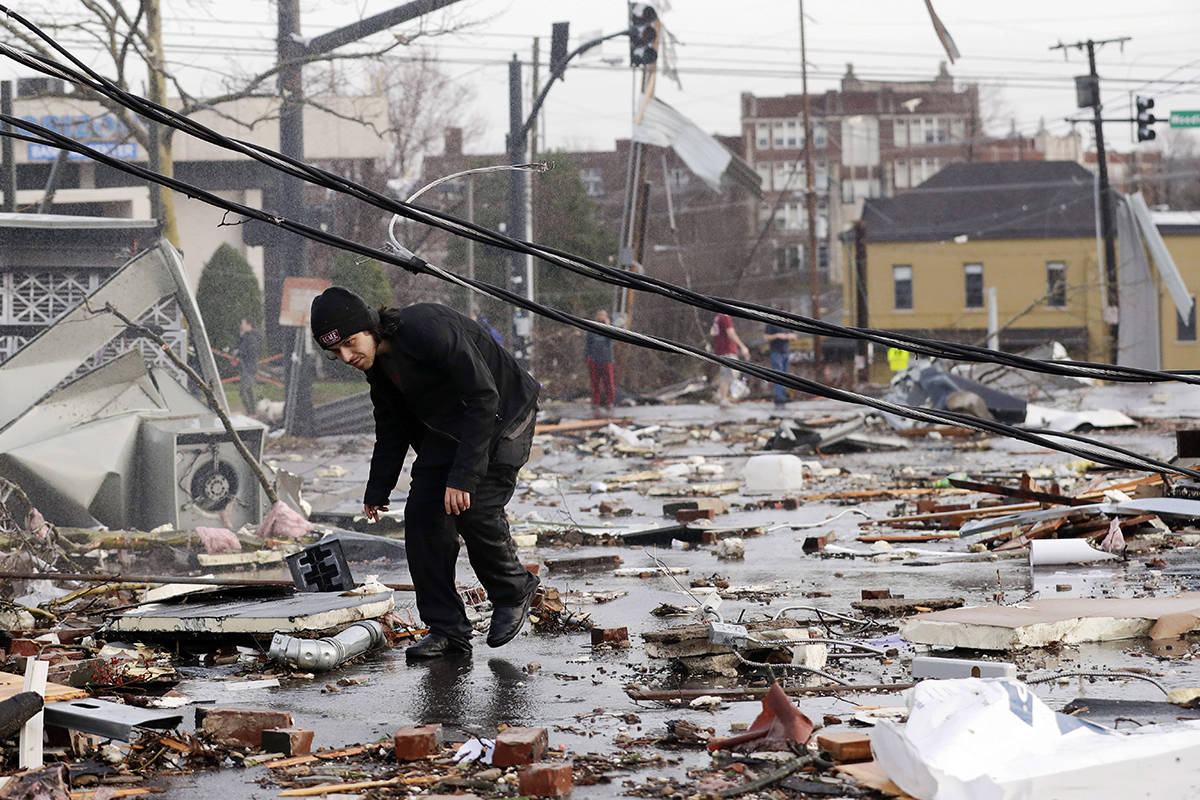 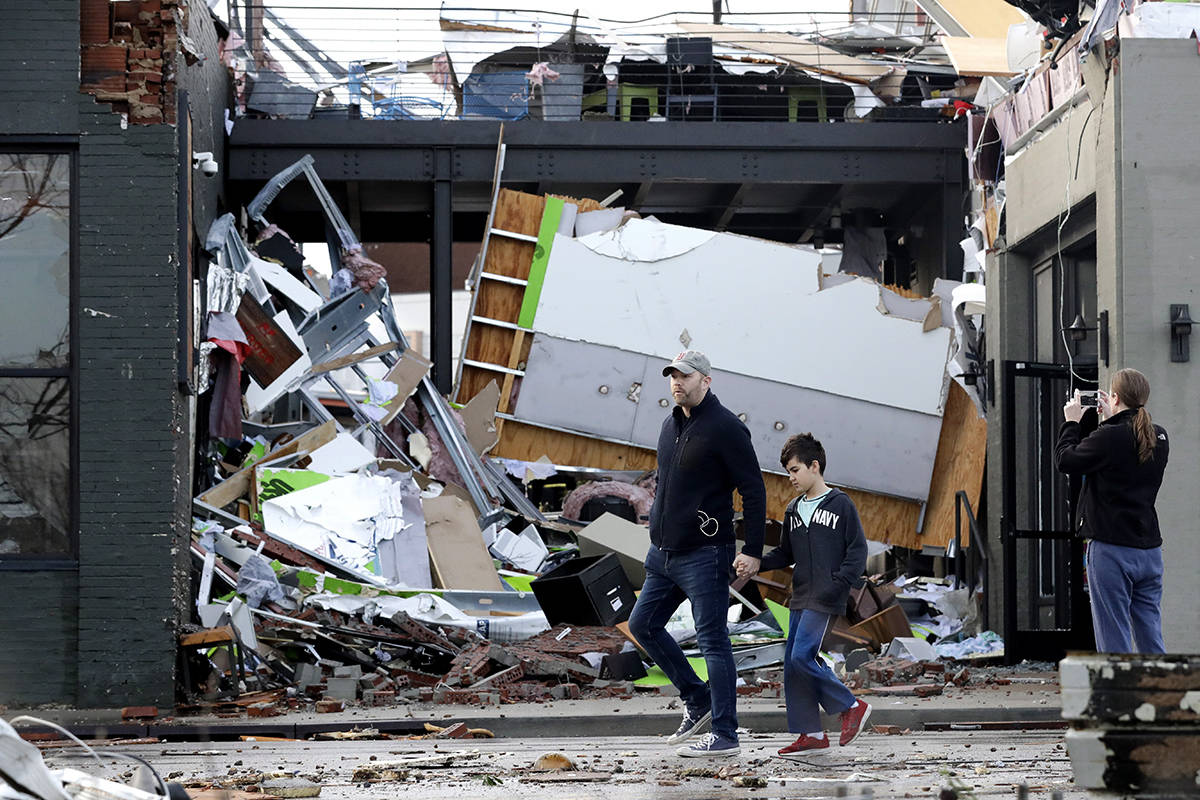 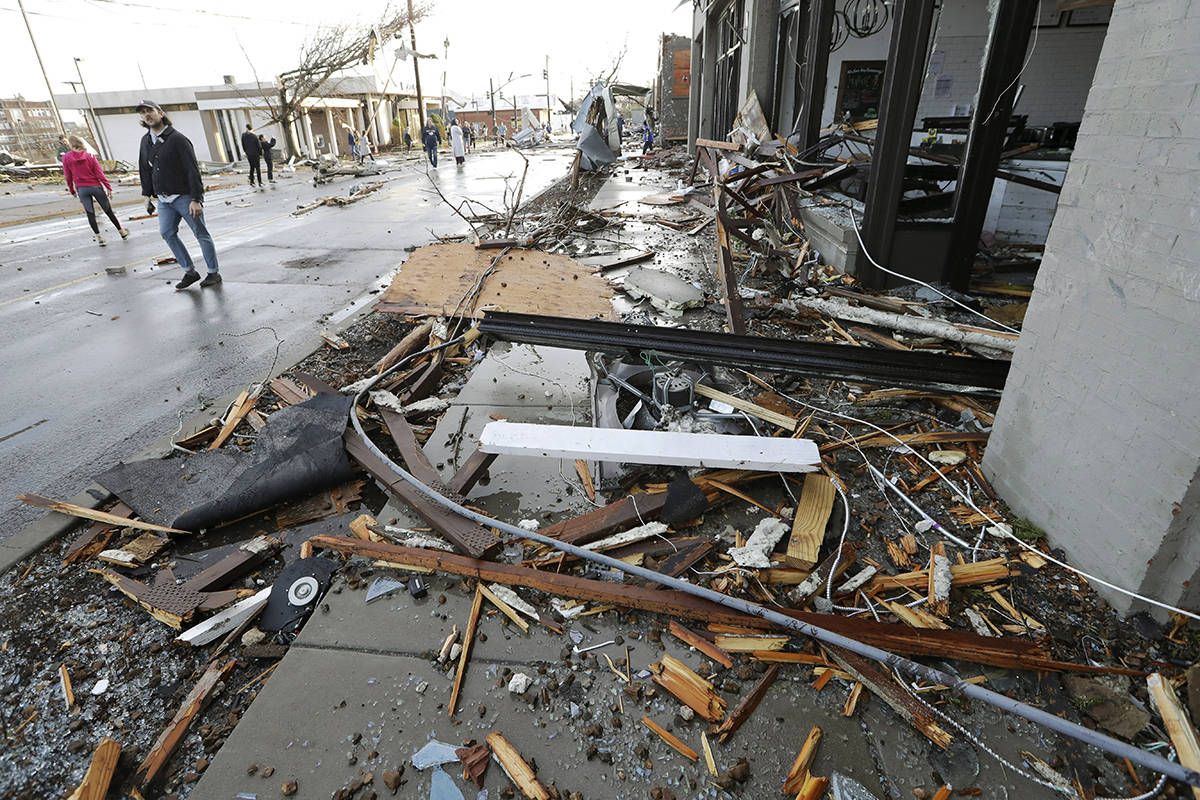 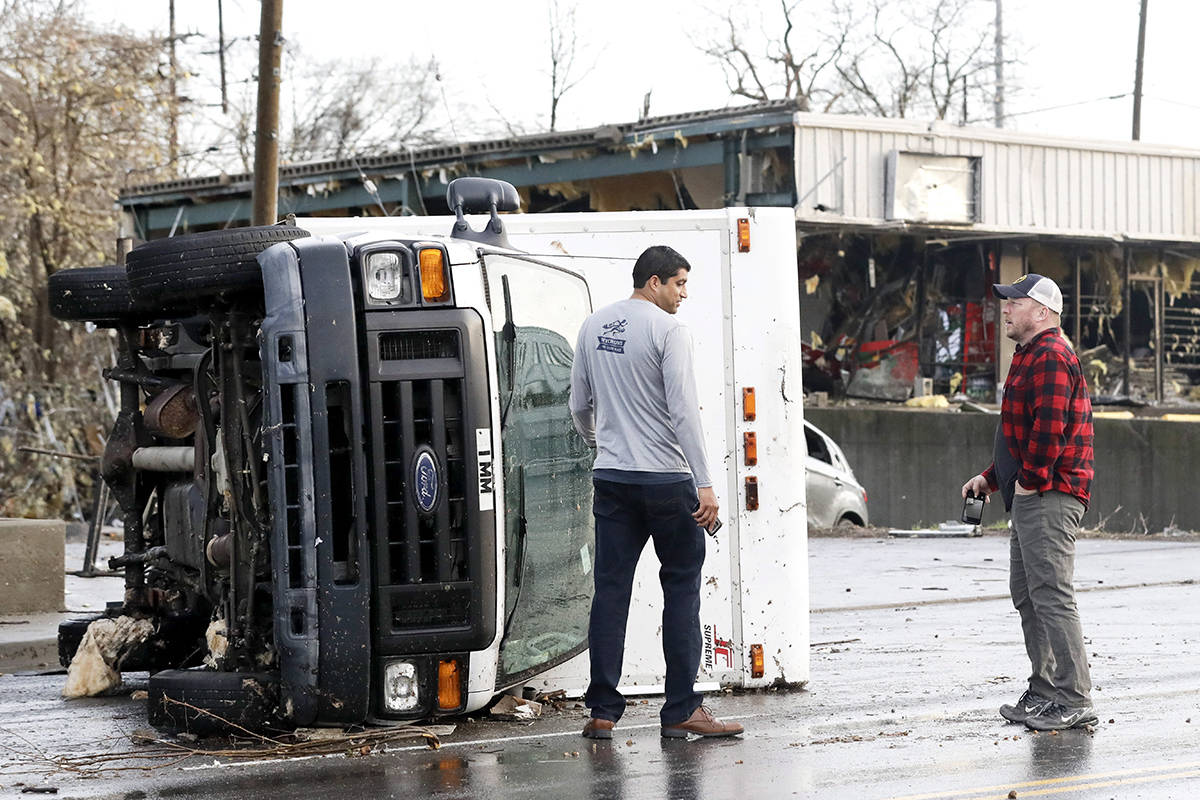 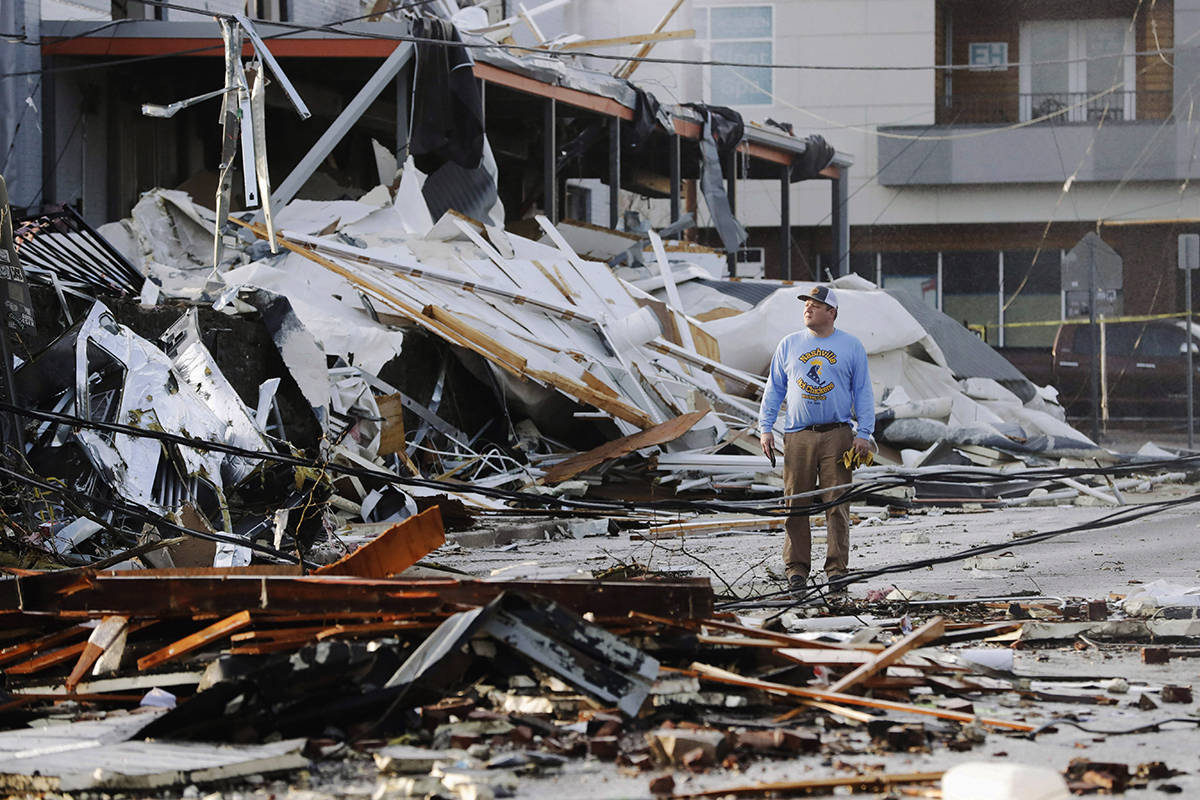 Tornadoes ripped across Tennessee early Tuesday, shredding at least 40 buildings and killing at least 19 people. One of the twisters caused severe damage across downtown Nashville, destroying the stained glass in a historic church and leaving hundreds of people homeless.

Daybreak revealed a landscape littered with blown-down walls and roofs, snapped power lines and huge broken trees, leaving city streets in gridlock. Schools, courts, transit lines, an airport and the state capitol were closed, and some damaged polling stations had to be moved only hours before Super Tuesday voting began.

“Last night was a reminder about how fragile life is,” Nashville Mayor John Cooper said at a Tuesday morning news conference.

Nashville residents walked around in dismay as emergency crews closed off roads. Roofs had been torn off apartment buildings, large trees uprooted and debris littered many sidewalks. Walls were peeled away, exposing living rooms and kitchens in damaged homes. Mangled power lines and broken trees came to rest on cars, streets and piles of rubble.

“It is heartbreaking. We have had loss of life all across the state,” said Gov. Bill Lee. He ordered nonessential state workers to stay home just before he was set to fly in a helicopter to survey damage.

President Donald Trump said he’d visited the area Friday. “We send our love and our prayers of the nation to every family that was affected,” he said. “We will get there, and we will recover, and we will rebuild, and we will help them.”

The tornadoes were spawned by a line of severe storms that stretched from Alabama into western Pennsylvania.

In Nashville, the twister’s path was mostly north and east of the heart of downtown, leaving many of its biggest tourism draws — the honky tonks of Broadway, the Grand Ole Opry House, the storied Ryman Auditorium, and the convention centre— unharmed. Instead the storm tore through areas transformed by a recent building boom. Germantown and East Nashville are two of the city’s trendiest neighbourhoods, with restaurants, music venues, high-end apartment complexes and rising home prices threatening to drive out longtime residents.

“The dogs started barking before the sirens went off, they knew what was coming,” said Paula Wade, of East Nashville. “Then we heard the roar … Something made me just sit straight up in bed, and something came through the window right above my head. If I hadn’t moved, I would’ve gotten a face full of glass.”

Then she looked across the street and saw the damage at East End United Methodist Church.

“It’s this beautiful Richardsonian Romanesque church; the bell tower is gone, the triptych window of Jesus the Good Shepherd that they just restored and put back up a few weeks ago is gone,” she said.

Wade immediately recalled how a tornado damaged her own St. Ann’s Episcopal church down the street in 1998.

“I had no idea that I still had some PTSD from that other experience so long ago, but the sound of the sirens, that low sound, there’s just nothing like it,” she said. “To look out and see the church, its just heartbreaking. It brings out everything that happened to St. Ann’s.”

The roof came crashing down on Ronald Baldwin and Harry Nahay in bedroom of the one-story brick home they share in East Nashville. “We couldn’t get out,” said Baldwin. “And so I just kept kicking and kicking until we finally made a hole.”

One tornado carved a path about 10 miles (16 kilometres) long, reportedly staying on the ground from near downtown Nashville along Interstate 40 to the city’s eastern suburbs of Mt. Juliet, Lebanon and Hermitage.

Metro Nashville police said crews were responding to about 40 building collapses. Among them was the Basement East Nashville, a popular music venue that had just held an election rally for presidential candidate Bernie Sanders. The crowd left shortly before the twister struck, the Tennessean newspaper reported.

The disaster affected voting in Tennessee, one of 14 Super Tuesday states. Officials said more than a dozen voting locations in Nashville’s Davidson County were damaged. Voters are being told they can vote at other open locations nearby. Other sites were opening late.

“Anyone that wants to vote, we want to create an opportunity for you,” Davidson County elections administrator Jeff Roberts said. Because poll workers will be navigating through a damaged city to deliver results Tuesday night, he said the tallying may take longer than anticipated.

A reported gas leak forced an evacuation of the IMT building in Germantown, according to WSMV-TV. Dozens of people, suddenly homeless, were seen carrying their belongings through garbage-strewn streets after the tornado blew through.

Schools were closed in Nashville and beyond. Nashville Electric tweeted that four of its substations were damaged in the tornado. Power outages were affecting more than 44,000 customers early Tuesday, the utility company said.

The governor’s spokeswoman, Gillum Ferguson, said hundreds of people went to a Red Cross shelter for displaced residents at the Nashville Farmers Market, just north of the state capitol, but a power outage there forced people to move again to the Centennial Sportsplex.

The storm system left just scattered rain in its wake as it moved eastward. Strong cells capable of causing damage were spotted in central Alabama, eastern Tennessee and the western Carolinas.