In a release issued Nov. 22, the Township announced its intent to purchase nearly 33 acres of forested land on the Willoughby property at 21198 Smith Cres. to preserve it as a passive park.

The future of the property, totalling 52.6 acres, has come into question by some residents after a large portion of forested land was cleared last February.

At the time of the clearing, the owner told the ALC their intent was to farm.

A few months later, an application was made to exclude 19.8 acres from the ALR to build a new 212 Street Connector (on 4.5 acres), and for future residential development (on 15.25 acres).

If the application is approved, the Township says it will purchase a treed, 32.83-acre parcel in the southeast portion of the property for $4,920,000 and create a public passive park, complete with trails.

“A number of residents and members of council expressed concern about this application, based on the forestation of the land, the natural habitat and wildlife it is home to, and its environmental significance,” Township Mayor Jack Froese said in the release.

“If the ALC allows the subdivision to take place, the Township will purchase a large portion of the land so it can be incorporated into the municipal arbour ribbon and enjoyed by everyone for generations to come.”

The intent of the arbour ribbon is to create a natural buffer between urban development and agricultural land.

According to the press release, the park would also “provide scenic views over the Milner Valley, and the retained trees would act as screening, to provide a visual buffer between the agricultural and urban uses.”

When asked what would happen if the ALC denies the exclusion application, Ramin Seifi, Township manager of engineering and community development, said the park would likely not come to fruition.

“It’s all subject to the ALC approval,” he told the Times.

The Township noted that the Willoughby Community Plan calls for a “major park” in that location. They also said that development of the land would bring in $1.5 to $2.3 million in park DCCs (development cost charges) to the municipality, which they intend to use in offsetting the cost of purchasing the land.

The remaining funding needed to make the purchase would come from parkland acquisition and DCC reserves.

Coun. David Davis said he supports the idea of turning the area into a park, but does not agree with the way it is being done.

“It’s too bad it had to come to this, meaning a land exclusion,” Davis said.

“It’s been in the plan for 20 years to have a road there, and of course, we could have just put a road through it instead of getting the whole (piece) excluded.

“I’m sad that this forested area was cut down with such poor intent. But I’m hopeful that we can protect the remaining area.”

I love the idea of a natural forest so residents can enjoy forest and space. This isn’t a pocket park. It’s 32 acres of trees, what’s left of the big trees, and it would make an excellent natural buffer for agriculture below on the ALR side. And we can’t afford to lose anymore buffers when it comes to big developments, like Yorkson or Willoughby, in general.

Coun. Michelle Sparrow, who, along with Davis, was one of four councillors to vote against sending the exclusion application to the ALC in October, shared similar sentiments.

“While I appreciate the idea of creating a park, this is contingent on allowing urban development on farmlands and I believe preserving our agricultural lands should be our main objective,” she told the Times.

“We have not been successful in taking a stand against these kinds of large removals of agricultural lands for urban development and we are continually sending the message that if you try hard enough you can develop your lands. We are raising land speculators and developers — not farmers — and I think we need to do a better job at the council table of keeping urban development off our farm lands.”

Coun. Petrina Arnason noted that planning and transportation discussions for this property date back to the 1990s, and that the Township and the ALC have historically identified land to be removed from the ALR to facilitate a new roadway. She, too, voted against sending the exclusion application to the ALC.

“I believe that much has changed since the 1990s and that any prior planning or transportation decisions should have been reviewed by our current Council to reflect existing conditions and subsequent policies such as the Willoughby Habitat Status Report as well as our Sustainability Charter,” she said.

At this point, Arnason said it is “premature to comment” on the Township’s proposal to turn the remaining forest into park, as the land purchase is contingent on the exclusion application being approved.

“However, if the properties are ultimately purchased, I would support an in-depth assessment of their potential use beyond their prescriptive addition to the arbour ribbon concept and passive park purposes,” she said.

“As the longer-term arbour ribbon plan and associated trails do not require the entire remainder of the property, I believe that the TOL should consider utilizing some of the arable un-forested lands for farming in order to encourage innovative options to support young farmer’s access to land as identified in the TOL’s Agricultural Viability Strategy.

“I would also be very supportive of public engagement in order to consider how the community envisions the use of the remainder of the property, should it be acquired by the TOL.”

Noni Cicuto, member of the Yorkson Watershed Enhancement Society, said the proposal is “a promising step in the right direction,” but still does not make up for the forest and habitat already lost.

“The dangling of the carrot tactic; you can have some of these trees for your community if…. tends to leave a bad taste in the mouth,” she said.

“The Langley Township has prioritized the Metro Vancouver Regional Growth Strategy’s goal of maintaining the current rate of growth, at the cost of everything else. This should not have been allowed to happen in the first place, but now that we are placed in this compromising position, sacrificing 19 acres of the forest just seems like the cost of business in Langley.”

Watchers of Langley Forests is another group that has been vocal about this property.

“The Township land deal would cement the loss of wildlife habitat, increased stormwater runoff and increased pollution resulting from the clearcut,” said WOLF member Kirk Robertson. “If the housing development proceeds it would be better to have a large buffer on the clearcut area to minimize these problems and protect the remaining forest. Restoration measures by humans or Mother Nature acting alone could then be undertaken in that buffer.” 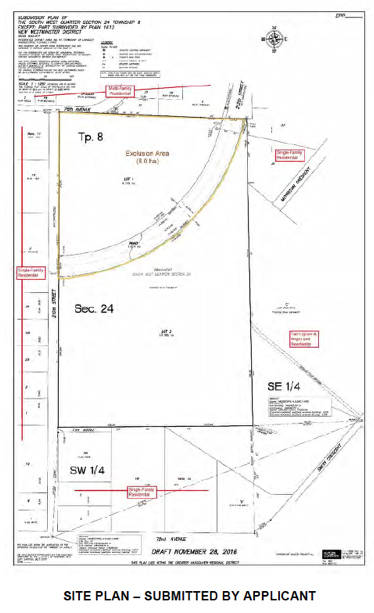 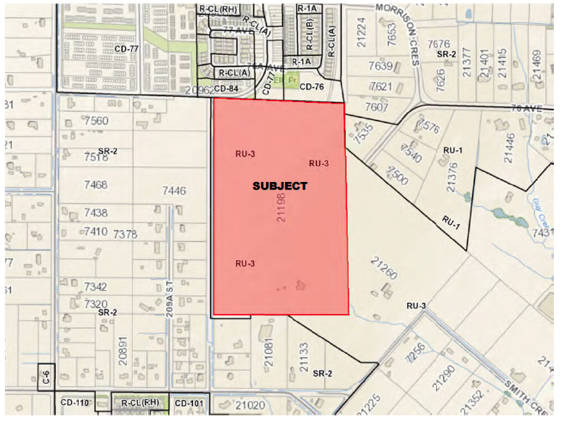 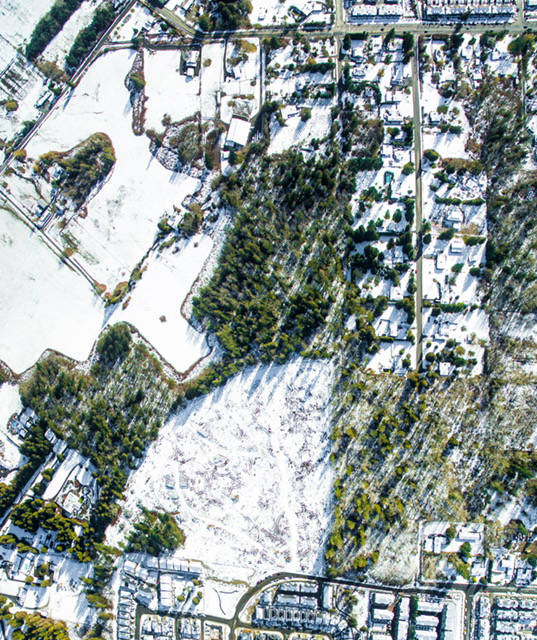 A drone captured this image of the tree removal area at Tara Farms on Feb. 26, 2017. Submitted photo 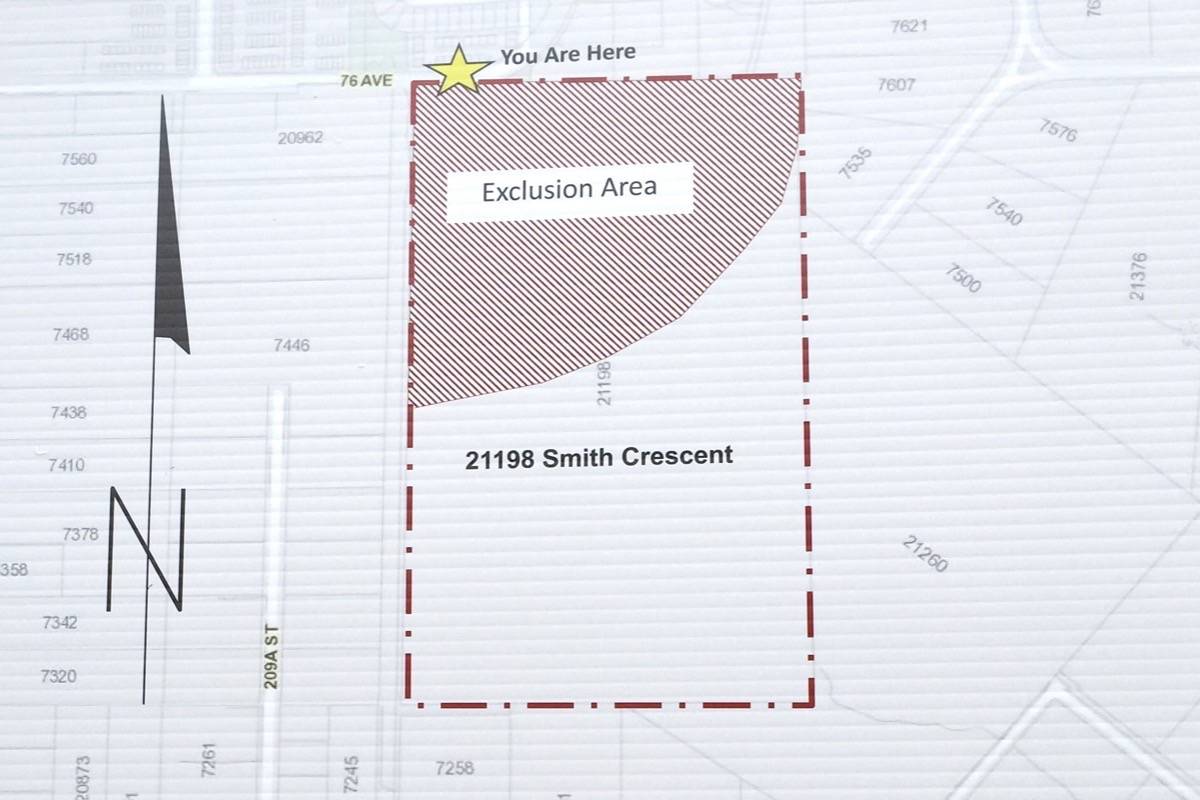 This map is posted on the edge of the Tara Farms property along 76 Avenue.